Don’t judge a book by its cover, or a game by its title, they say, and in this case, they are correct because even though Wars and Battles: October War 1973 ($4.99) might win the award for the most self-evident and slightly uninteresting title ever, the game hiding underneath that title is an interesting strategy game that covers a conflict rarely visited by wargames.

After introducing its wargaming platform with a traditional scenario, Normandy 1944, Kermorio decided to branch out into a relatively unexplored theater of war and focus on the turbulent 70s in the Middle East. Such an approach, though, comes with the risk of making a game that tends to few wargamers since most are interested in the Allies and the Nazis rather than the Israeli and Arab armies. Still, with coherent mechanics, a nice – if sterile – art style, and plenty of scenarios and campaigns to play, WAB: October War 1973 is a fun wargame for your iPad that will give you plenty to do. 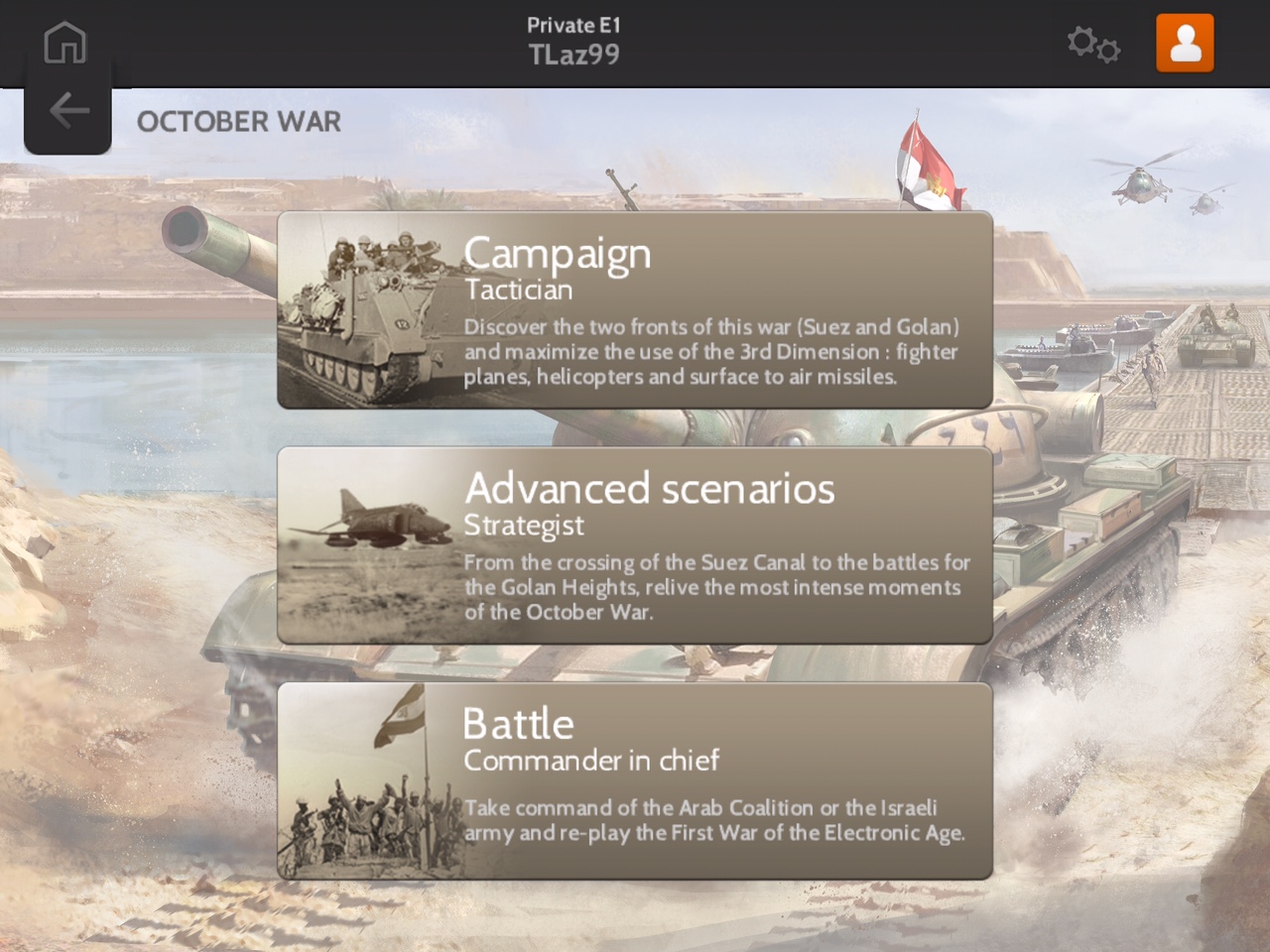 If you aren’t familiar with the events of the 1973 Arab-Israeli War, the short conflict started on October 6 when Egypt and Syria attacked Israel’s forces across the Sinai Peninsula and the Golan Heights. While initially surprised by the Arab forces, the Israeli Army quickly regrouped and halted the offensive, eventually launching a successful counter-offensive. The war led to the 1978 Camp David Accords that returned the Sinai to Egypt and normalized relationships between Egypt and Israel.

In terms of gameplay, the context of this conflict creates a game with different strategic challenges than WWII games, for instance adding SAM (Surface to Air Missiles) and advanced anti-tank weapons that can make infantry units much more threatening to tank units. The surprise element of the conflict translates nicely into two very different experiences depending on which side you pick since when you lead the Arab forces, you mostly try to advance quickly, encircle enemy units, and take advantage of your initial numerical superiority while as the Israeli army, you try to hang on with every last unit while waiting for reinforcements to help you stem, and ultimately reverse, the tide. 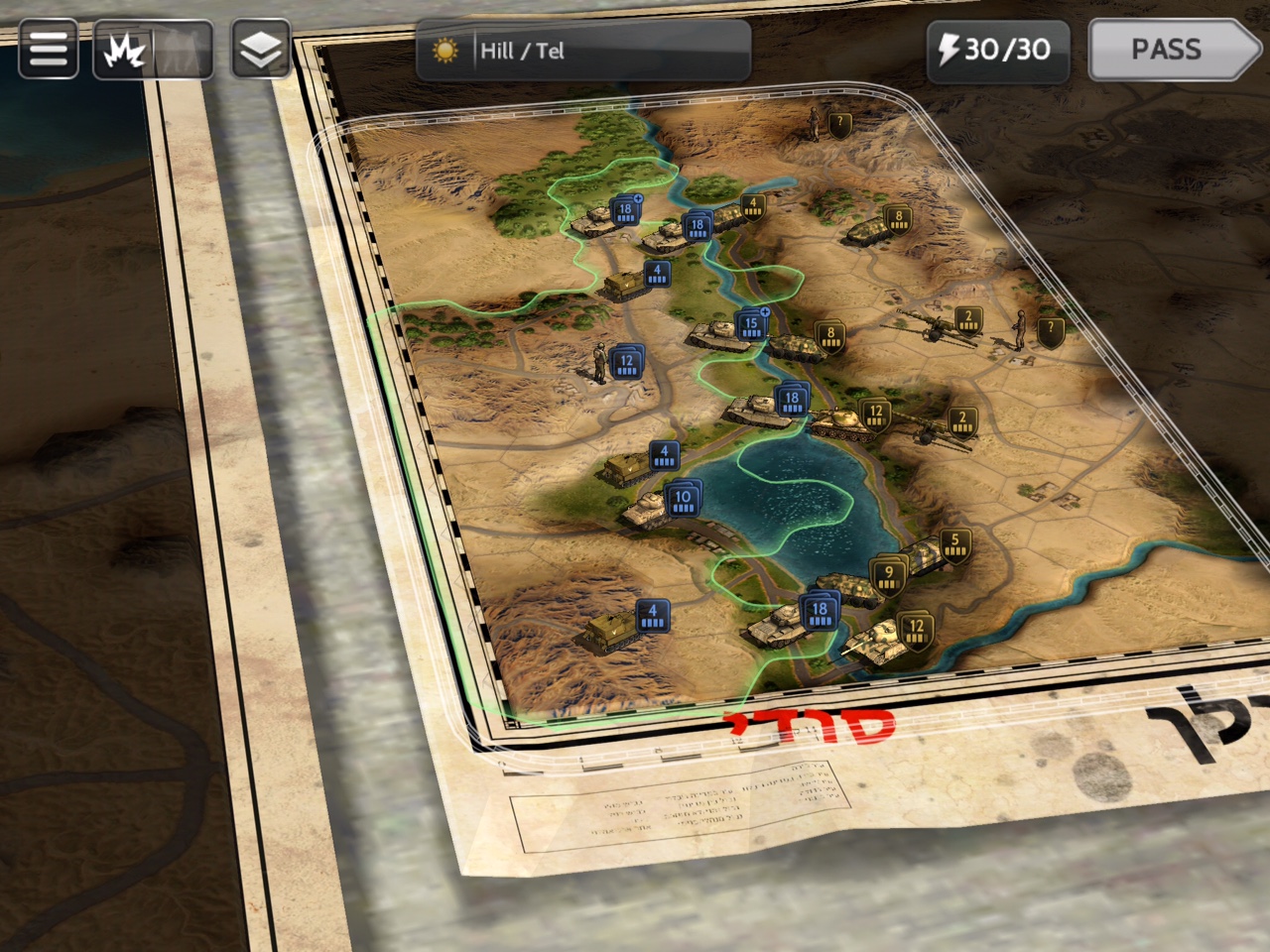 In order to cover such a multi-faceted and complex – if short – conflict, WAB: October War 1973 offers 7 Campaign Scenarios, 10 Advanced Scenarios, and 2 Battles. Given all these options, players can fight long or short battles, in large or small maps, with as many as a hundred units or as few as a dozen. However, despite the great variety of possible scenarios, the objectives rarely deviate from the “hold this" or “capture that" kind (with the rare “destroy this" thrown in), which can feel a bit repetitive. The always-sunny weather doesn’t help allay the feeling of repetition since it removes another factor of variability that could have made the game more interesting.

What I did like, though, is that despite the fact that the war was fought over a relatively small area, WAB: October 1973 cleverly fragments its two main maps in a variety of ways to offer different battlefields for the various scenarios. Even though the maps have the historically-accurate brown with the occasional patch of green, there’s enough variety in the terrain (hills, swamps, rivers, and so on) to provide interesting tactical decisions. However, even though the manual provides information on how the terrain affects battle results, I would’ve preferred to have access to that information in-game. If you add the asynchronous multiplayer to the mix, WAB: October 1973 offers many hours of gameplay with a variety of scenarios but a relative lack of variety in objectives. 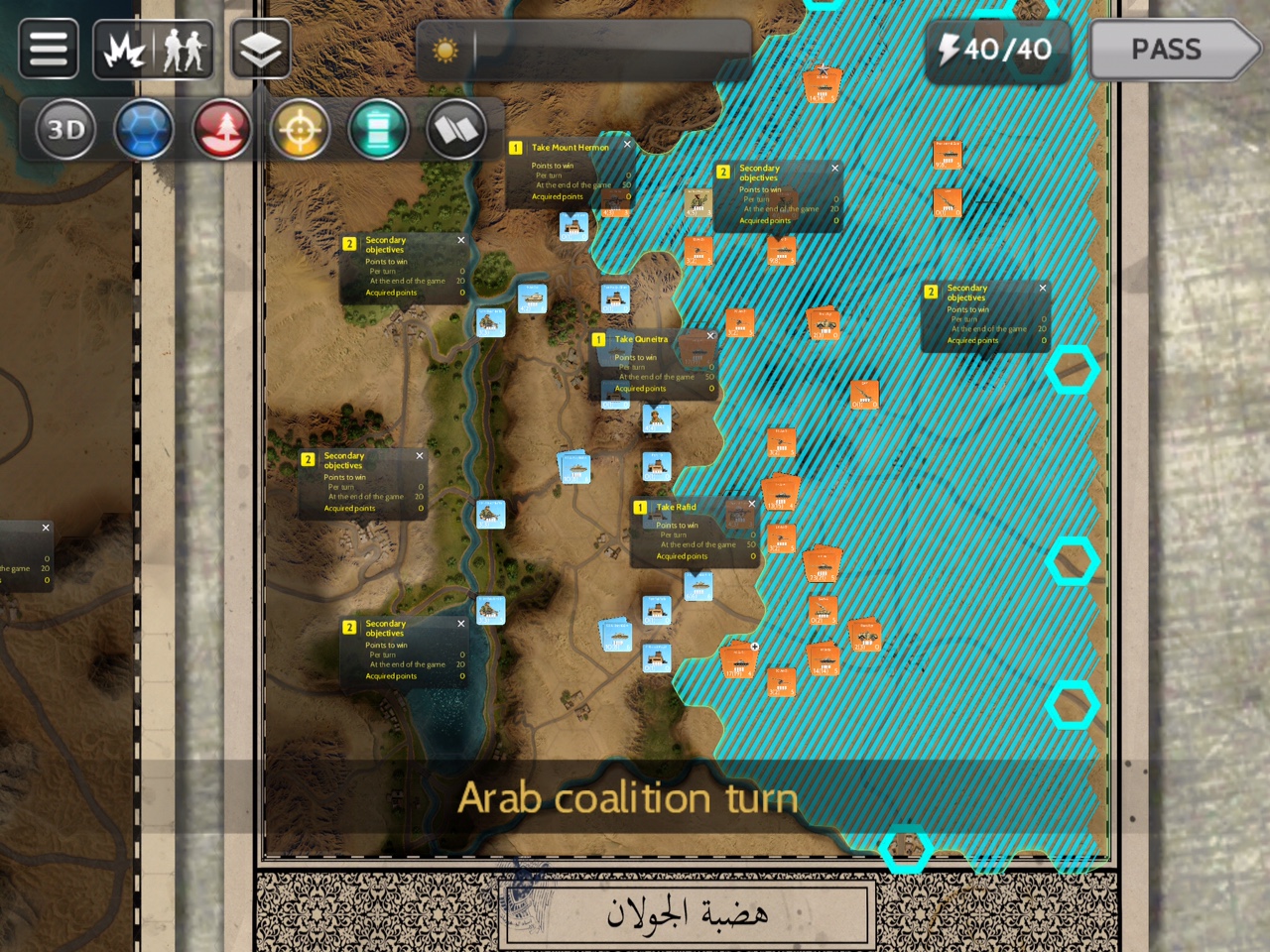 You can play the game both in a 3D mode, which makes the game look like a miniatures wargame, and 2D, which looks more like traditional board games. Personally, I prefer the 2D view because it lets you see the battlefield and assess tactical opportunities better, but 3D is admittedly prettier. In both modes, the game provides a lot of the information needed through various map overlays and menus that keep you informed on the current situation and on each unit’s state.

The visuals are crisp and clear, but slightly too sterile for my taste. In a way, the battlefield looks too clean and tidy; I would have preferred to see destroyed units stay on the field, marks on the map from explosions, in other words details that would make the terrain look more like a battlefield than a map. When it comes to the units, the developers went with the historical desert camo for the various units on both sides, but I wish they had taken a bit of liberty here because the units look almost identical in the 3D view, outside the differently-colored unit indicators. This uniformity made it harder to quickly survey the battlefield. Admittedly, the situation is much better in the 2D view. 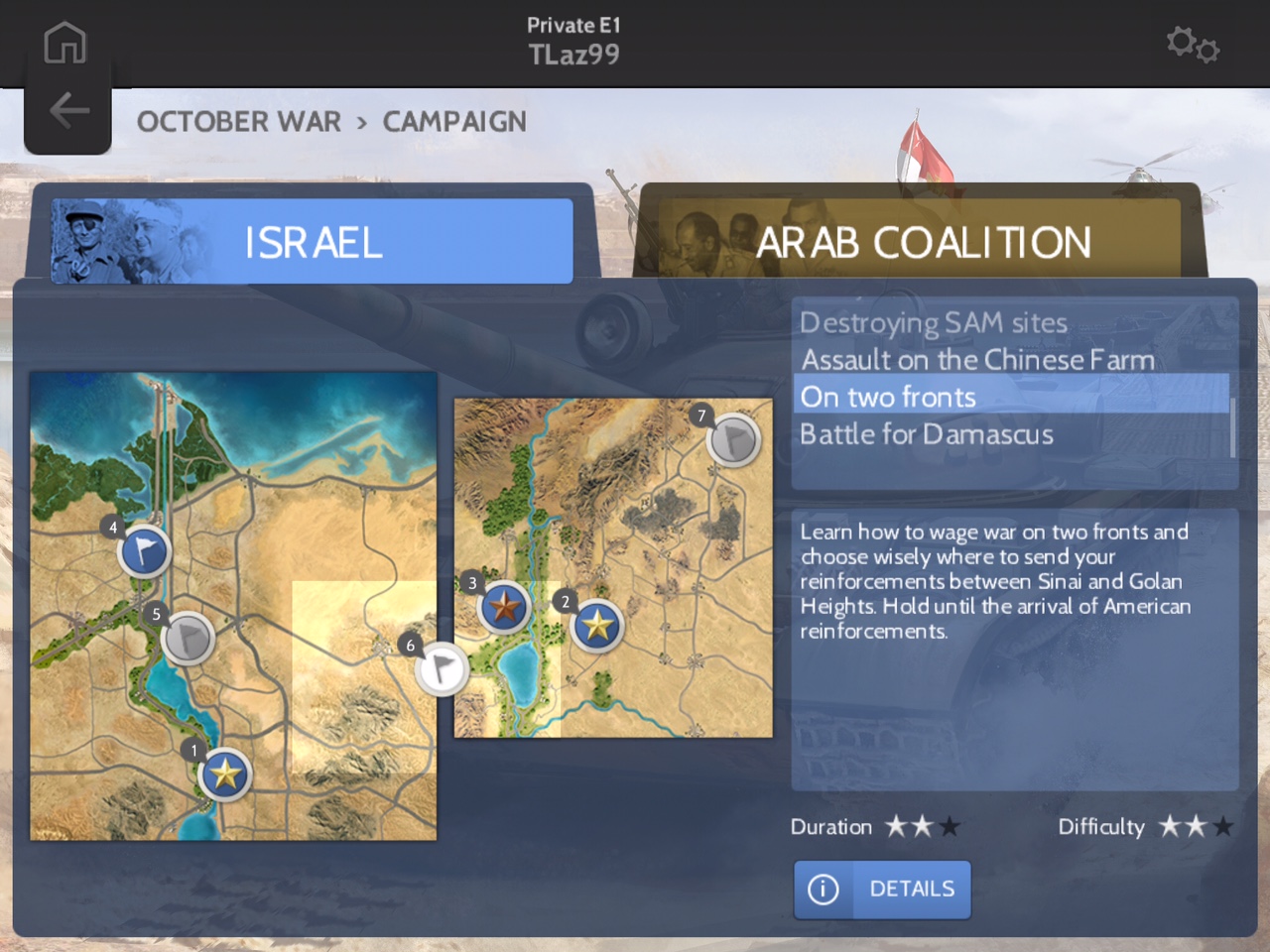 The actual battle mechanics aren’t the most revolutionary, but they are complex enough to provide meaty battles and relatively avoid the “battering ram" gameplay style where you just gather up forces and repeatedly attack the adjacent hex until the opponent eventually dies. Each unit has various characteristics such as Quality (elite, veteran, etc), which determines the ability to absorb fatigue, Life Points, which represent a unit’s ability to resist damage, Fatigue (the physical and morale strain of units), Status, Attack/Defense Values, Supply, and Movement.

As you can tell, there are many factors that influence the performance of your units in this game, with factors such as fatigue and quality especially pertinent since they played a huge role in the historical outcome of the battle. In general, having large stacks of units (over three) is extremely beneficial for you, which sometimes comes at the expense of really considering each unit’s strengths as you go with bulk over quality. What I did enjoy a lot was the supply rules that allow for strategic encirclements of units. Supply rules in wargames always make for more fun tactics because positioning and terrain matter more; placing your units next to a river to avoid encirclement from that side actually matters. You can also call artillery strikes and aircraft support, which is always a fun feature in wargames. 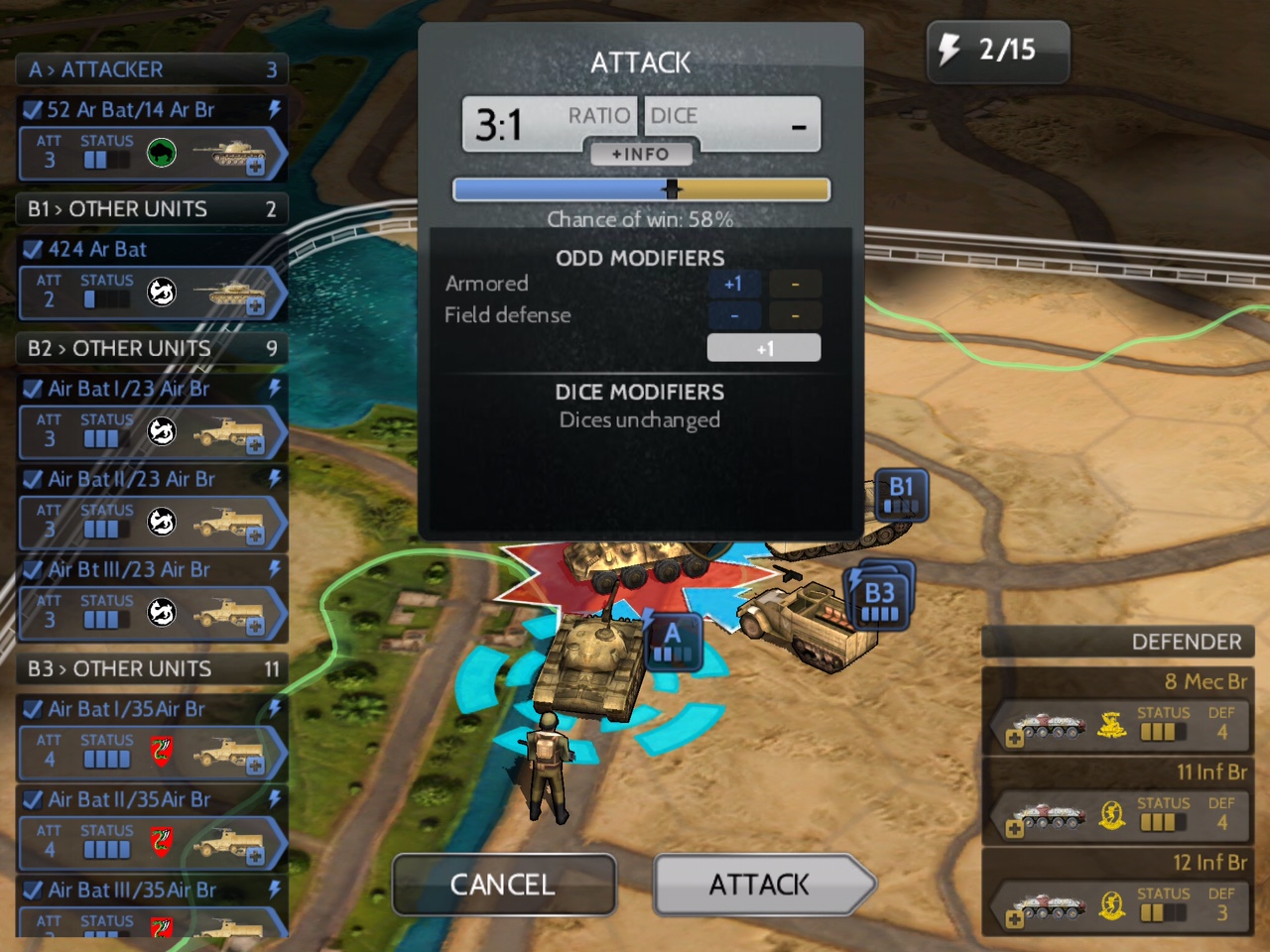 The game offers both Single Player and Multiplayer modes, both of which are entertaining. The developers went with an AI that attempts to reproduce the historical moves of each side. For instance, the Arab side might become more passive after crossing the canal just like its historical counterpart did during the war. I found the AI relatively challenging and not too prone to silly moves, so it will offer plenty of challenge to most players. 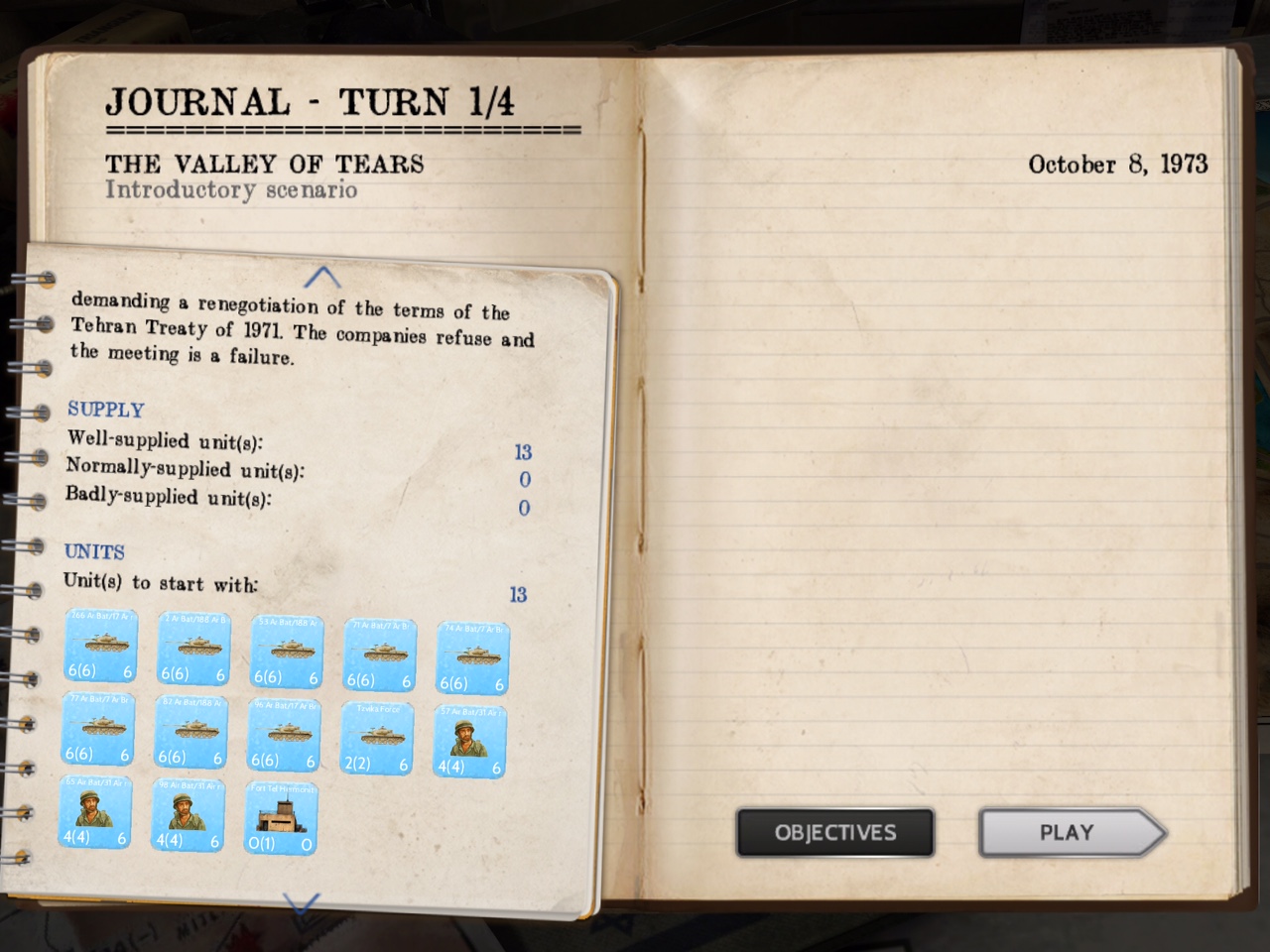 WA: October War 1973 is a refreshing wargame that deals with a historical moment not often found in wargames. Kermorio’s decision is a blessing and a curse, though, as WA: October War 1973 risks becoming more of a niche wargame because not everyone will want to play as either of those two sides; unfortunately, most wargamers still love their WWII games. Still, it’s nice to see developers dare to do something different, and since Wars and Battles is a platform that will have various scenarios in the future, those who don’t want this niche title can, instead, play Normandy 1944 or the upcoming Market Garden. Also, keep in mind that Kremorio plans to make Wars and Battles cross-platform and universal in the future.

I enjoyed the game overall even if I felt that the battlefield was a bit sterile, and I was missing some information that can only be found in the manual. If you already own the Normany 1944 scenario, you can play the initial battles for free and then unlock the rest of the content for $9.99, a logical price for all the content you get.