In The Mesh ($1.99) by Creatiu Lab you play as a mad king who believes he rules over an ever-changing land of whole numbers. In the middle of the game board is a white tile which represents the most ideal House, and your goal as ruler is to combine the number tiles to the North and South so they add up to the white one. If you fail, the remaining numbers will revolt and destroy sections of your kingdom, bringing you and your people ever closer to a gruesome demise.

Actually, it’s just regular ol’ numbers on a hexagonal grid with no story. I made all that up because it’s hard to talk about math without making people fall asleep. (Also, I finally started watching Game of Thrones this week. NO SPOILERS.) 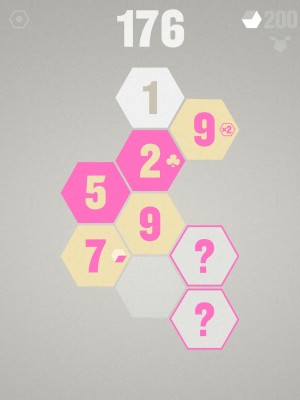 Let’s try this again. Say the white tile is a 5. You need to manipulate the others so they equal that number. You have a 3 and a 2, so you combine those into 5. You got a point! I’m super proud of you! However, the remaining numbers are a 6 and a 1. If you put those together you’ll be stuck with a 7, overshooting your goal by 2. Luckily, if you double-tap either the 6 or 1 tile it will invert its color from light to dark and you can now subtract them. Voilà, 5! You’ve won the round, and the board (and white goal number) now changes to something new.

Sounds simple enough, but it can actually be quite tricky to figure out how all the numbers are supposed to fit together. Especially when they start throwing “2x” and “?” tiles in the mix which you may or may not need to use. On top of all that, there’s also the possibility that you won’t be able to achieve the goal number, and you’ll instead need to cancel numbers out to get rid of them (by subtracting an 8 from an 8, say). It’s important that your tiles either equal the goal number or be canceled off the board, because if you end up with an extra number you’ll be punished by having the board shrunk so your next rounds will be even more difficult. (There have been some questions in our forums about whether or not each board can be solved perfectly, or if it’s just random. The developers cryptically offer that it’s “controlled random”, which I’m assuming means it generates the tiles randomly but in a way that is winnable every time.) 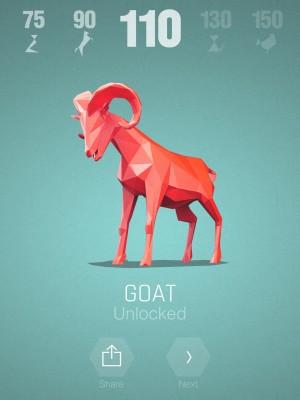 I can feel this starting to get confusing now (maybe I should have stuck with GoT references?) but it’s actually really, really easy to grasp once you start playing. In fact, it’s my favorite type of math game: the kind where you don’t actually need to be good at math. For the most part you’ll just be adding and subtracting small numbers from each other, and occasionally multiplying or dividing them by 2. It feels a teeny-tiny bit like Threes ($5.99), what with all the combining and stuff, but slightly more math-y. Like Threes combined with Calculords (Free). Those are both really stellar games, so if that sounds appealing to you, this should by right up your alley.

There are a few things that drag it down a bit, though. Occasionally you’ll be faced with one of the game’s timed rounds, which add a layer of stress to a game that’s otherwise completely zen. The Dark Mode turns the board black and you can only see the numbers when you touch the screen. Unfortunately, touching the screen makes a short timer resume, so you have to memorize 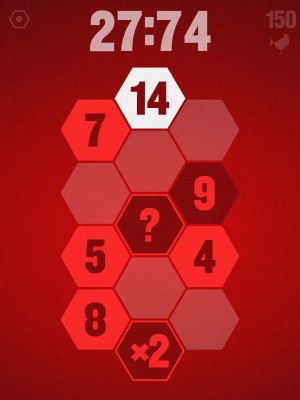 where everything is before you make a move. Similarly, the Bomb Mode turns everything a menacing red and you just have a straightforward timer counting down. (The timers start around 30 seconds, but the further into the game you get, the shorter they become.) Both of these modes are fine and work well, but they feel slightly out of place in such an otherwise contemplative puzzler. The reason I like the game so much is because it allows me to sit and work out how the numbers should go in my head before making a move, and the timed rounds aren’t always welcome in that regard. It feels like playing a nice game of chess with a friend, and every few moves some jerk lobs a stick of dynamite under the table.

As I said, though, the timed modes are fine on their own. I just wish they had their own… well, mode. As it is now, you only have the main game to play and that’s it. Take it or leave it. There are some pretty gorgeous low-poly statues of Zodiac animals you can unlock by reaching specific scores, but there’s not much else to do beyond that. Luckily, the main game mechanics and the overall look and feel of everything is so solid that it doesn’t matter that there’s not a whole lot else to do.

Despite being pretty bare-bones and having a few timed game mechanics that are slightly annoying, The Mesh is still a very easy recommend. Especially for only two bucks. It’s simple, beautiful, and relaxing–usually. It’s the kind of game where you can spend 45 minutes slowly accumulating a great score and then lose, and think “I should have thought that through a little more. I can do better next time.” Best of all, it feels really unique and doesn’t pander to anyone. Winter is coming!