There are a number of ancient iOS games I’d just about kill to have updated to make them compatible with current iPhones and iPads. Chief among them is a criminally underrated minesweeper clone called Mines In Space ($1.99). It’s so old that the Touch Arcade “review” was written by Arn himself, way back in 2008. It was incredibly fun, looked great (for the time), and had several different modes that were absolutely brilliant twists on Minesweeper. It was also, unfortunately, completely broken by the time I upgraded to an iPhone 5. 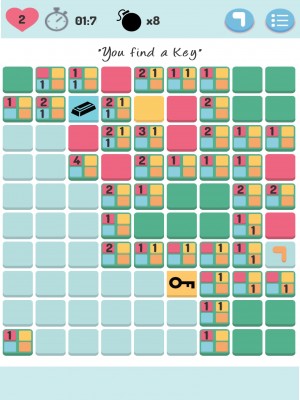 I miss that game dearly, and ever since then I’ve been on the lookout for something–anything–that can turn Microsoft’s classic on its head in an interesting way. Which is why I smashed the “Buy” button on Electric Fruit’s Puzzle Sweeper (Free) last thursday so hard that it just about punched a hole straight through my phone. It’s a clever little game that combines Minesweeper with dungeon crawling, and despite some problems here and there, it’s actually pretty fun.

For a lot of TA regulars out there, the first thing that came to mind after that last sentence was probably Dungelot ($0.99), another game that combines those two elements. But whereas Dungelot leans more toward a standard dungeon crawler, Sweeper is much closer to regular ol’ Minesweeper. You’re presented with a 9×9 board of tiles (in Easy mode) and your goal is to explore as much of each “dungeon” as you can without blowing yourself up. Each tile (or cell) represents a room, and inside can be a bomb, a key, a treasure chest, or the exit. 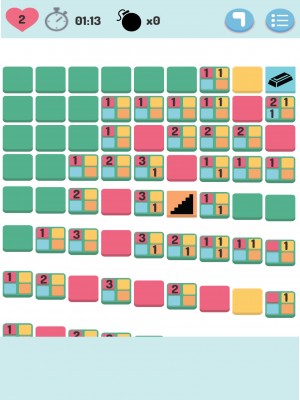 In the original Minesweeper, the only way to figure out what each tile holds is to look at the numbers on the board, and the Big Twist in Puzzle Sweeper is that each number tile can have four numbers instead of one. The number in pink represents a bomb (or mine, I suppose), yellow is a key, blue is a treasure chest, and orange is the exit. Interestingly, you can’t open a room that contains a treasure chest or the exit unless you first have a key for them, so they’re essentially mines until you find enough keys. It’s kind of awkward to wrap your brain around it at first, as it feels a lot like you’re playing four different games of Minesweeper layered on top of each other, but you do get the hang of it eventually.

The controls are as straightforward as you’d hope, with a simple tap to clear each room. There’s also a toggle to enter flagging mode if you want to mark where you think bombs, chests, keys, and the exit are. Finally, you can tap-and-hold on a bomb tile to disarm it, but if you choose one without a bomb you’ll lose a life. (Did I mention the game has lives? Easy and Medium modes have two lives and Hard has three.) 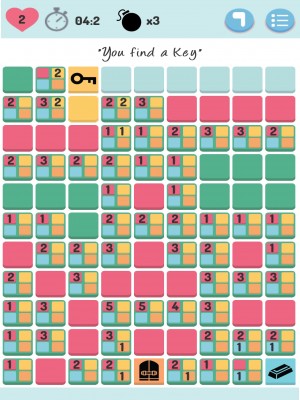 All of that is quite good and clever, but I do have a number of issues with the game. First of all, while I enjoy the colorfully minimalist look of everything, there are a lot of textures that are rather fuzzy around the edges. It’s always a bit jarring when some things look “retina” and others don’t, especially since it’s not a problem you see much anymore. Another problem is just how bare-bones the game is. There are three difficulties (which are barely distinguishable from each other), and that’s it. It’s such a neat twist on the Minesweeper formula that it kills me they didn’t flesh things out a bit more, with other modes or themes or achievements or social features or something. Which brings me to my final complaint, which may be the biggest: Where the heck is Game Center? There are leaderboards in the game for each difficulty, but they each only have three spots and there’s no way to share them or compare with friends or anything. They are pretty pointless, and it essentially kills any replay value the game could have otherwise had. This is 2015, man. What good is a high score if I can’t show it off to anyone?

Puzzle Sweeper is a game I desperately want to love. It has a pleasant art style, a neat gimmick, and is pretty fun overall. However, as a fairly big Minesweeper nut, I’ve seen a lot of these games come and go and it takes something really special to turn my head. Puzzle Sweeper is probably the best one I’ve seen since last year’s A Few Billion Square Tiles (Free), but neither of them quite reach the brilliance of Mines in Space for me. And since there’s a snowball’s chance in Hell of that one being updated anytime soon, Electric Fruit’s new game is a pretty good bet if you’re as into these games as I am.