Old genres rarely die, they just often end up evolving into something a bit different. That’s certainly the case with beat-em-ups, a genre which reached its height in the 16-bit era only to almost completely vanish in the following generation. That happened for many reasons, including market saturation, the popularity of one-on-one fighters eating the genre’s lunch, an overall lack of innovation, and the 3D nature of the gameplay meaning it got precious little boost from the shift into polygons the way other genres did. A few attempts were made to keep the genre going on PlayStation and its contemporaries, but they met with limited success at best. It wouldn’t be until the release of the PlayStation 2 that the beat-em-up would find its new footing, thanks to Koei’s Dynasty Warriors series. That series spawned many sequels, spin-offs, and imitators, and even today serves as a general template for the genre.

At first blush, you would think Hero Fighter X (Free) was directly inspired by Koei’s popular series. Some aspects of it most likely are, but Hero Fighter X is the latest installment in a series that predates Dynasty Warriors by at least a few years. Little Fighter, a DOS game from independent developer Marti Wong, is a freeware fighting game where you can take control of one of a number of characters and engage in fast-paced arena battles. If you’ve ever played the six-player battle mode of Treasure’s Guardian Heroes, it’s a bit like that. The game was reasonably popular, and it got an even more popular sequel in 1999. Hero Fighter X follows up on both of those games with a marginally more cohesive theme and story, along with a few other interesting additions. 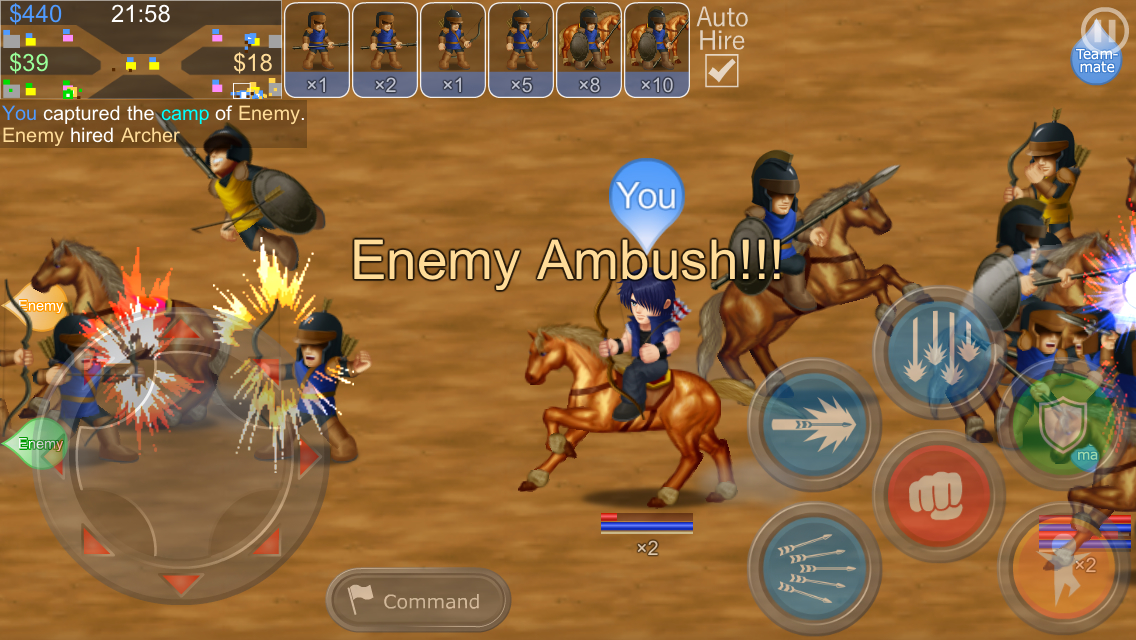 Hero Fighter X is a stage-based arena fighter where you unlock tons of new characters by progressing through the game. There are several different types of stages, with some involving one-on-one or team vs. team fights that feel very similar to the earlier titles. Other battles are larger in their scope, with dozens of characters on-screen at once. It feels chaotic and exhilarating all at once. While I’ve called it an arena fighter, in practice some of the arenas are so long that they might as well be regular beat-em-up levels. You can dash about them on foot or on horseback, so it’s pretty easy to get around. Each character comes loaded with their own weapon, skills, and stats, and although some of them play similarly, there’s quite a bit of variety in the line-up on the whole.

The most interesting kinds of levels are ones where you are pitted against enemy armies and need to destroy their bases while protecting your own. Typically, the bases are in opposite corners, with gold mines and camps scattered along the way for the teams to capture. The more money you have coming in, the more soldiers you can hire to help you. When there are just two teams, it’s simply a matter of overwhelming the enemy before they can get to you, but when there are more than two on the field, it becomes a delightful game of spreading your troops around. You’ll want to bring enough of them with you to secure new points, but you’ll need to leave some behind to guard against the other teams that might attack your own points. These levels can get pretty long, but every victory was supremely satisfying. This is also where the game feels the most like a 2D Dynasty Warriors, because the field is full of fodder enemies with scattered leader characters. You’ll need to dash all over the battlefield to take care of things your own troops can’t quite pull off.

All of this hinges on the actual fighting being fun, of course. Luckily, the developer’s years of experience show strongly in this regard. The combat is approachable but with just enough depth for more advanced players to go wild. Every character can do a standard attack, defend, jump, and evade. On top of that, each one also has two or more special moves that chain together nicely. Special moves use up MP, which restores over time at a fairly speedy rate. You can’t spam your best attacks, but you can generally sprinkle in your special moves without worrying too much about your MP. Adding in the variety that comes from 22 different playable characters, Hero Fighter X‘s fighting system supports tons of different play styles. It’s just a matter of finding, and unlocking, the one that works best for you. 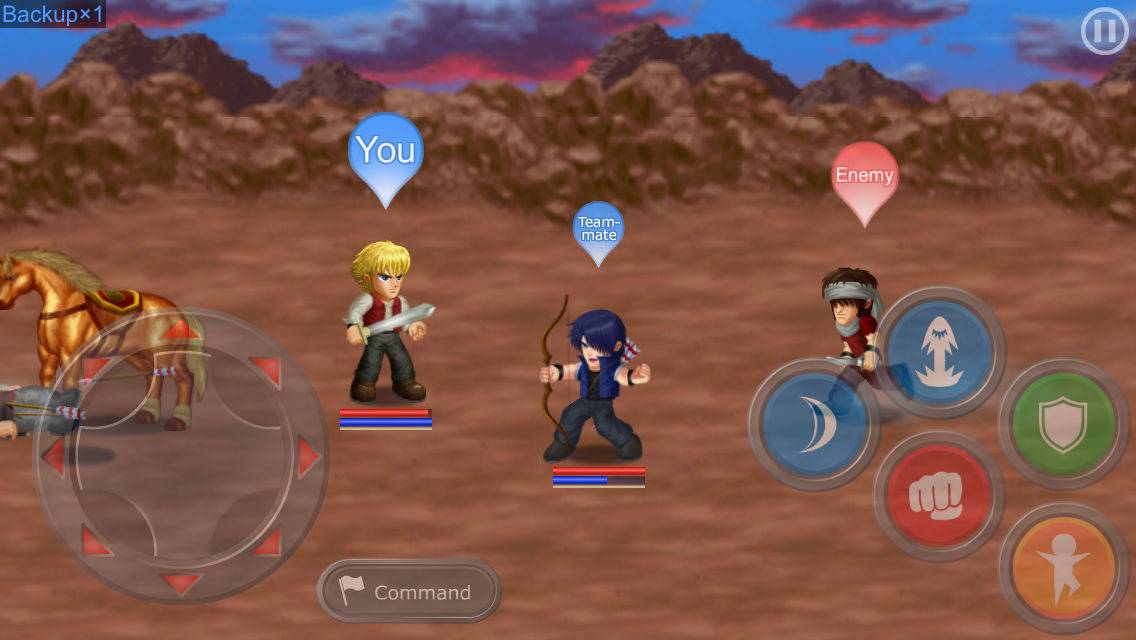 The game uses virtual buttons for controls, and when things get hectic, characters with large movesets, and therefore more virtual buttons, can get a little tricky to be precise with. There is unfortunately no controller support, so you’ll have to learn to live with the default controls. It’s also enormously difficult to keep an eye on your character in some of the stages. The game makes a valiant effort in this regard, flagging your character and your teammates along with important enemies, but there’s only so much that can do when there are stages with almost a hundred sprites running around. I like those stages a lot for their sheer scale, but there’s no question the battle system shines a lot brighter in fights with fewer participants. The game is fairly tough on its own terms, so it’s frustrating when you fail from a misfire or losing track of where your character is in a sea of bodies.

Fortunately, the game gives a reasonably-sized chunk away for you to try out. You get a good taste of the game from the initial free download, which includes the full first act. Being the beginning of the game, you only get a few characters to play with, and none of the stages are all that hard, but it should help you decide whether or not you want to plunk down the $5.99 for the full version. If you do, you’ll find the full game has hundreds of stages and, as mentioned before, a total of 22 playable characters. It’s a lot of content for your money, and at least for me, it never stopped being a whole lot of fun even after I had a couple hundred stages behind me. There are no other IAPs in Hero Fighter X aside from that unlock, so you don’t need to worry about any shenanigans. There are consumable buffs you can use, but they’re earned through play and can be farmed in training stages if you find you really need them. The game does want you to share codes with friends to unlock fighters early, but you definitely don’t need to do that if you don’t want to. You’ll get everyone through the natural course of playing. 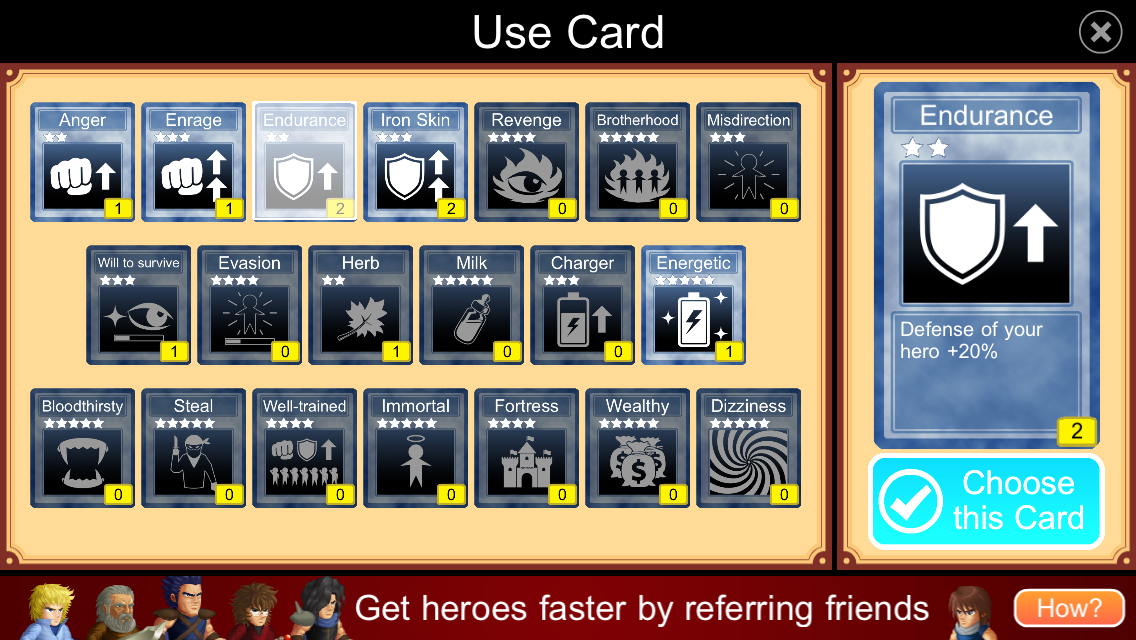 So long as you don’t mind fiddling a bit with controls that sometimes have trouble keeping up with the admittedly busy action, you’ll get on fine with Hero Fighter X. It packs a considerable amount of variety into the beat-em-up concept, and in terms of fighters and stages, it’s hard to think of an iOS brawler that gives you more for your money. It’s always great to see a game with a new angle on a somewhat exhausted genre, and Hero Fighter X more than lives up to both its lineage and its promise.