Don’t Starve ($4.99). A simple imperative that encapsulates so much about this game; it sets the mood and traces your constant, furious, yet ultimately futile attempts to follow that advice (or is it a command?). Klei Entertainment’s Don’t Starve is a survival game with a lot in common with Minecraft in terms of gameplay, but it also manages to draw its own path with its amazing art style and uncompromising and challenging design that pushes players into moments of desperation punctuated by brief moments of triumph. Played either with the help of the many dedicated wikis or as blindly as a newborn baby traversing Hell, Don’t Starve stands as a memorable, meticulously designed experience with a UI and control scheme that make it a real pleasure to play on the iPad. Just remember, Don’t Starve.

I wanted to play Don’t Starve when it came out on the PC, but for one reason or another I never managed to. So, even though I know it’s a port, I don’t have any prior knowledge of how the game played on other platforms outside the fact that many players and critics loved it. In Don’t Starve you play as Wilson, a failure of a scientist with an amazing hairstyle who, of course, gets inspired by a malicious spirit to create a fantastic machine. The game definitely has the flavor of the eighteenth and nineteenth centuries Man Vs The machine conflict that permeated the Industrial Revolution and engendered the anxiety of the all-mighty machines replacing the incapable humanity. Wilson’s machine promptly swallows him up and ejects him into a peculiar, offset world with one simple instruction: eat before the night comes. 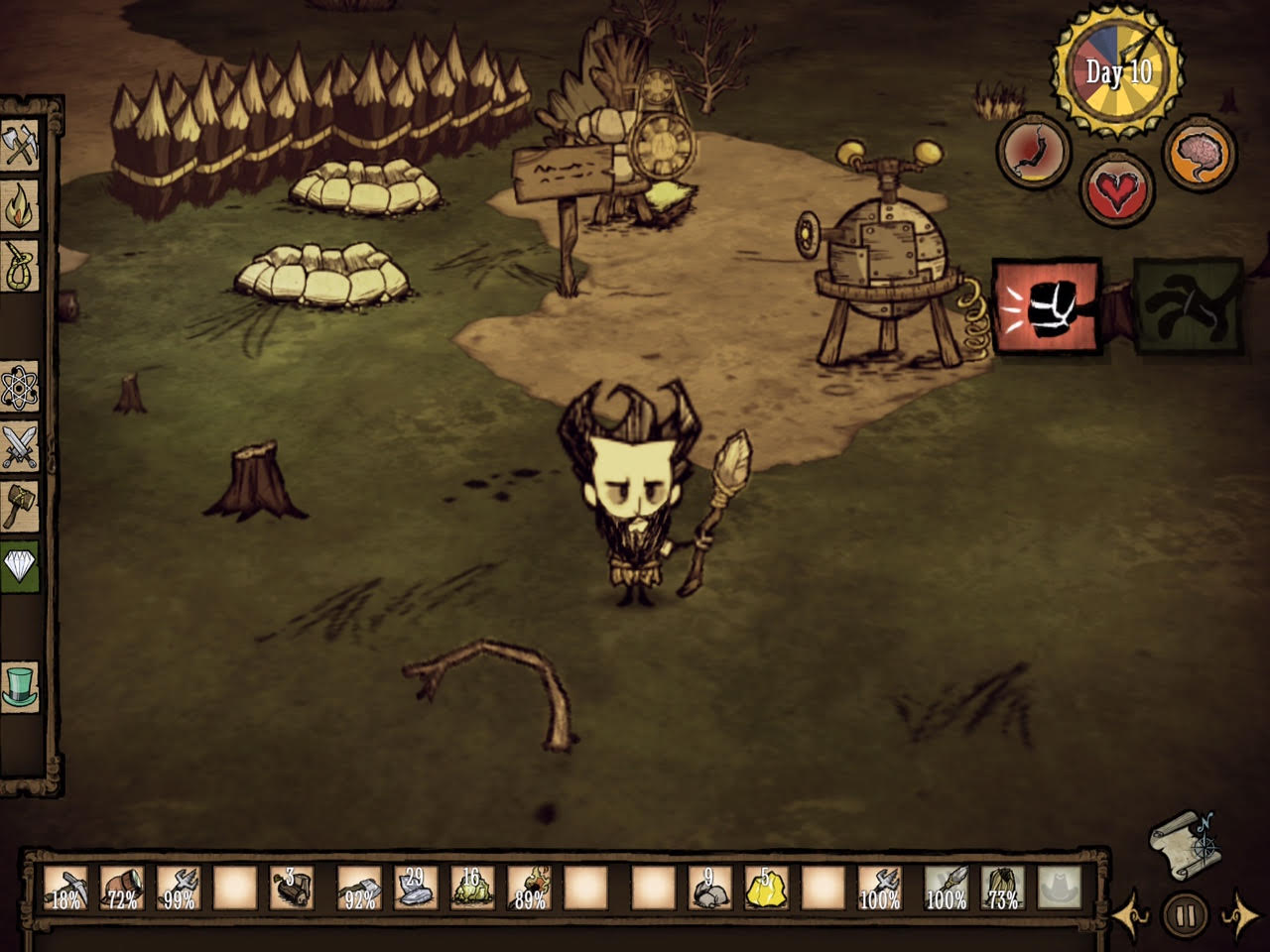 It’s not often in gaming that a simple sentence encapsulates all the player needs to make it through the game: eat, and watch out for the darkness. Minecraft also threw players in an unforgiving world, especially in the beta days before wikis made your first night in the blocky world easier to bear. However, it didn’t have a Hunger meter until much later in development, which meant you could focus on building a shelter and protecting yourself from the dangers of the upcoming night. Don’t Starve, on the other hand, really ramps up the survival aspect immediately by turning the Hunger meter on the top right of the screen into a ticking time bomb, guiding your every move and punctuating your journey with the constant need to drop everything and quickly find some food to eat. 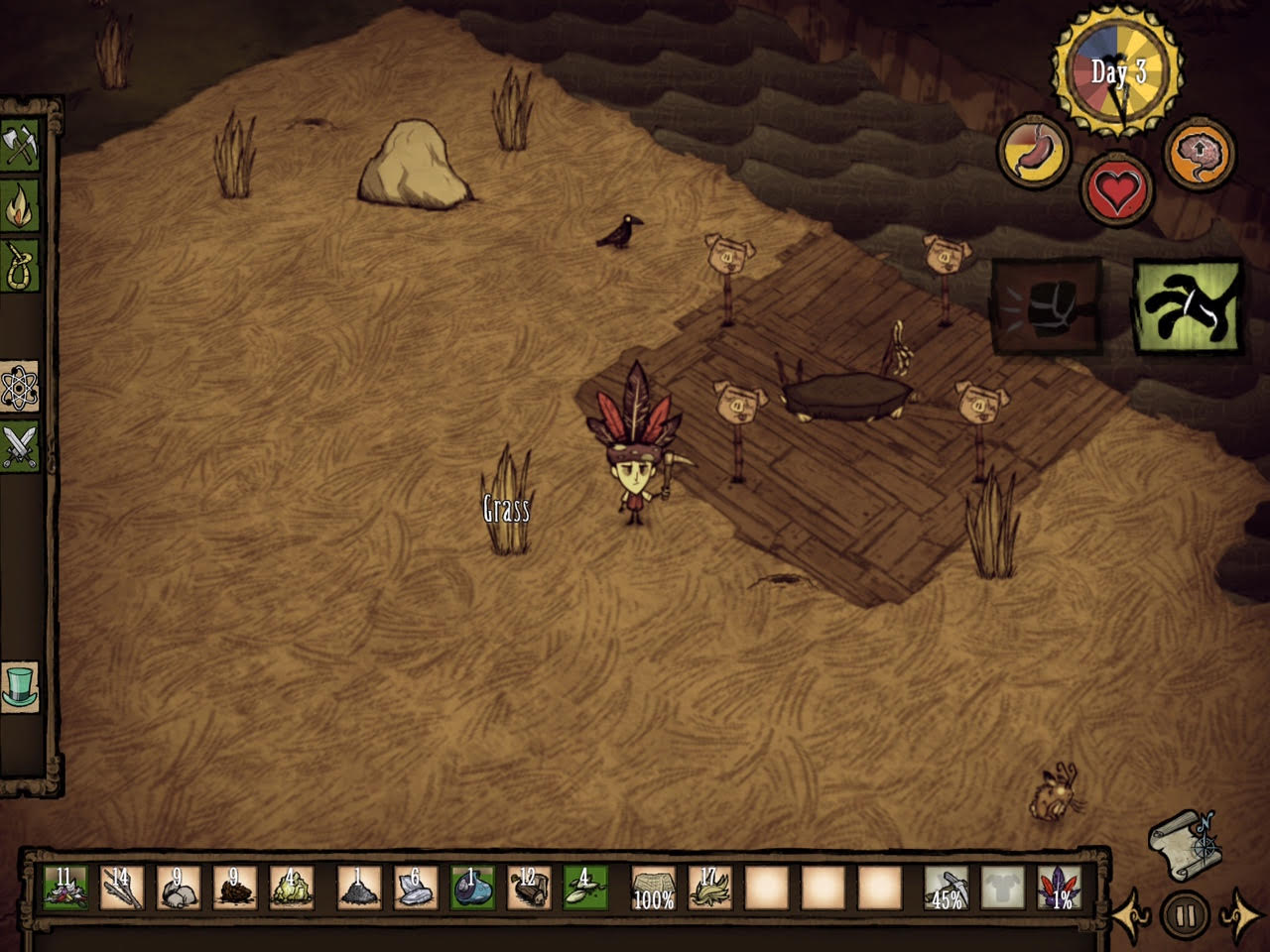 I played the game completely without any wiki or web help because I wanted to see how demanding the game can get when played without guidance, especially since tablet gaming isn’t as conducive to web browsing as PC gaming. And, to be honest, most of the fun of games like Don’t Starve and Minecraft lies in the exploration and discovery that wikis ruin, at least for me. At the same time, because of my many hours playing Minecraft, I’m not an amateur when it comes to survival games, and I immediately knew the game’s fundamental rhythm of find, collect, construct, improve, and repeat. So, perhaps those who haven’t played survival games before will find the game too daunting without any extraneous assistance. Overall though, while Don’t Starve is a difficult game, it’s definitely not impossible nor too infuriating. 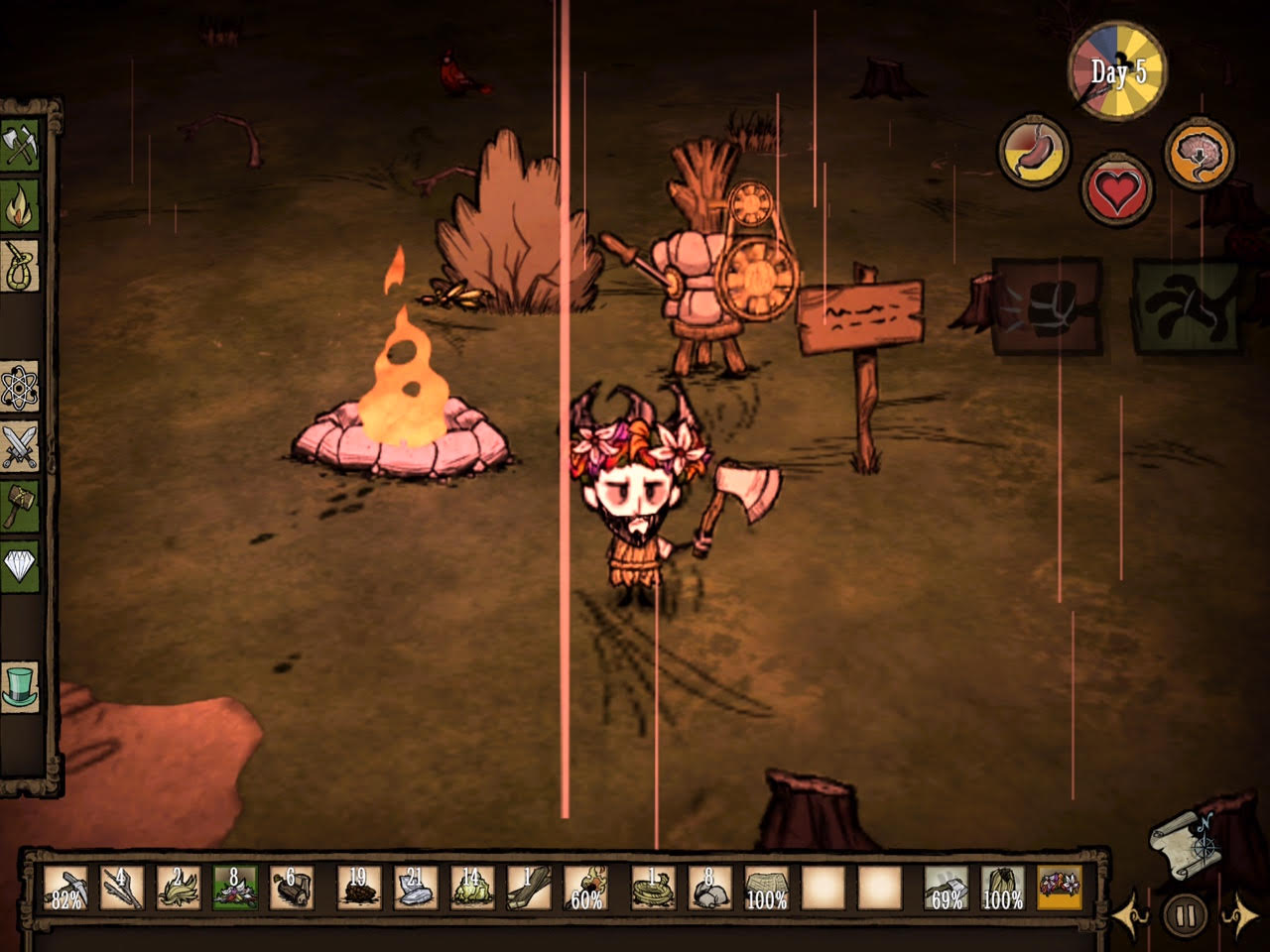 When you first enter the strange world of Don’t Starve, you find yourself in what looks like a normal chunk of wilderness populated by rabbits and birds, trees and bushes. Yet, the land you traverse quickly starts feeling a bit…off. The game feels vaguely set in the nineteenth century (or thereabouts), so it’s only appropriate that the ideas of a great 19th century figure, Sigmund Freud, seem to influence the design and the story, especially his concept of the “uncanny" that seems to permeate Don’t Starve. Without going too much into it, the uncanny is the idea of the familiar becoming unfamiliar, the experience of seeing something recognizable but somehow off in a way that makes it unsettling. Wilson’s experiences go from walking in a world that looks just like ours to suddenly bumping into walking pigs that shout “I Kill Now!" and “You Go Smash," or suddenly seeing buffalo-looking animals that look almost normal yet not quite right. 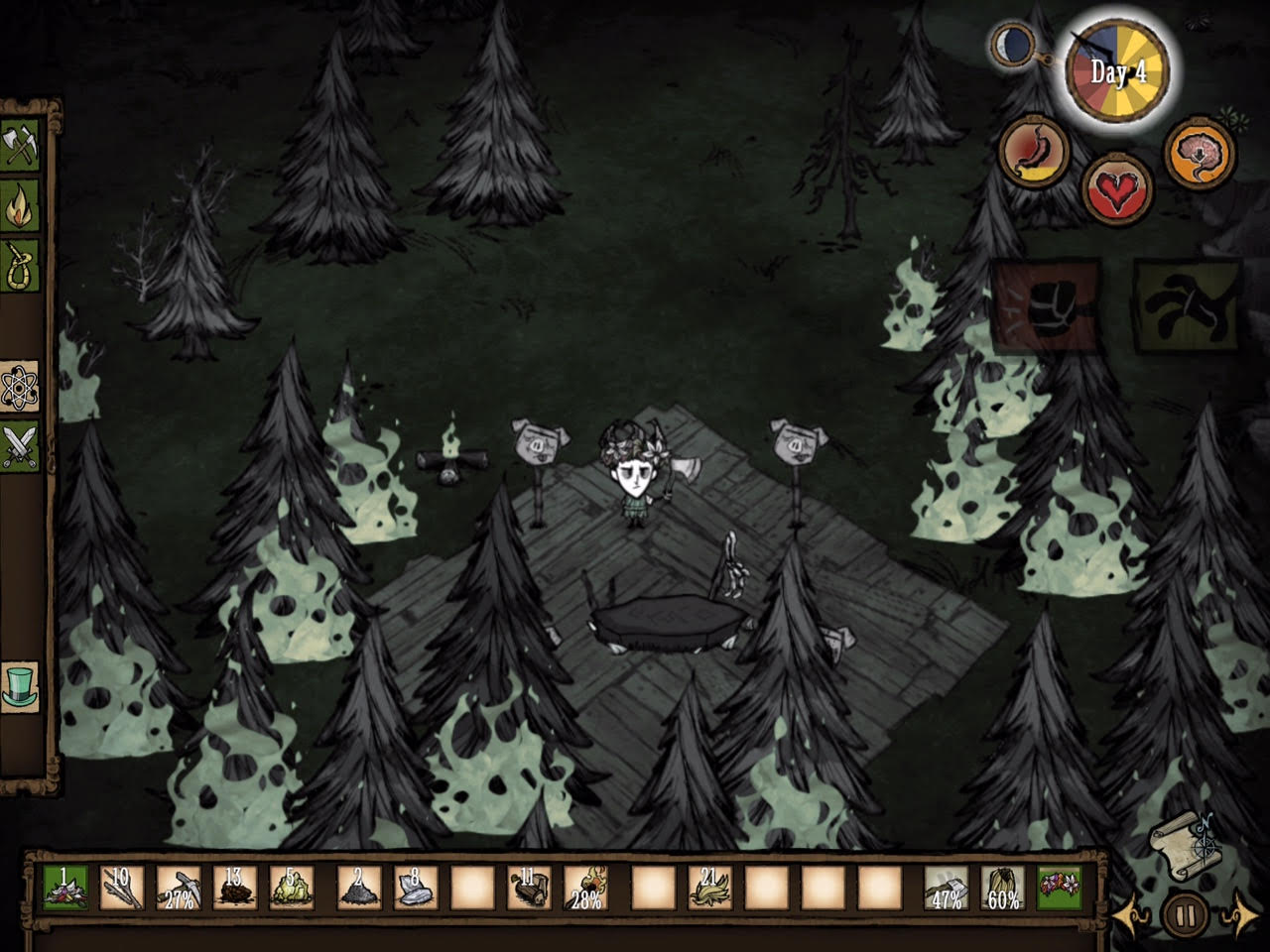 This pervasive weirdness makes the world of Don’t Starve very unique and gives it its own identity. And that’s before adding the giants, the cthulhu-like tentacles that pop out of the ground, the walking eyeballs, and so on, and all this weirdness appears even before your Sanity meter starts decreasing. Speaking of, Don’t Starve‘s Sanity meter adds another layer on top of the physical survival aspect, since hanging around “evil" places for too long, eating monster meat, and other similar activities take a toll on your sanity, a toll that manifests itself as hallucinations that include hazy, shapeless creatures floating nearby and various animals transforming into monstrous versions of themselves. I liked this aspect of the game because survival includes more than simply surviving physically; if you don’t protect your mind (by wearing a flower garland, for example), you will go crazy. 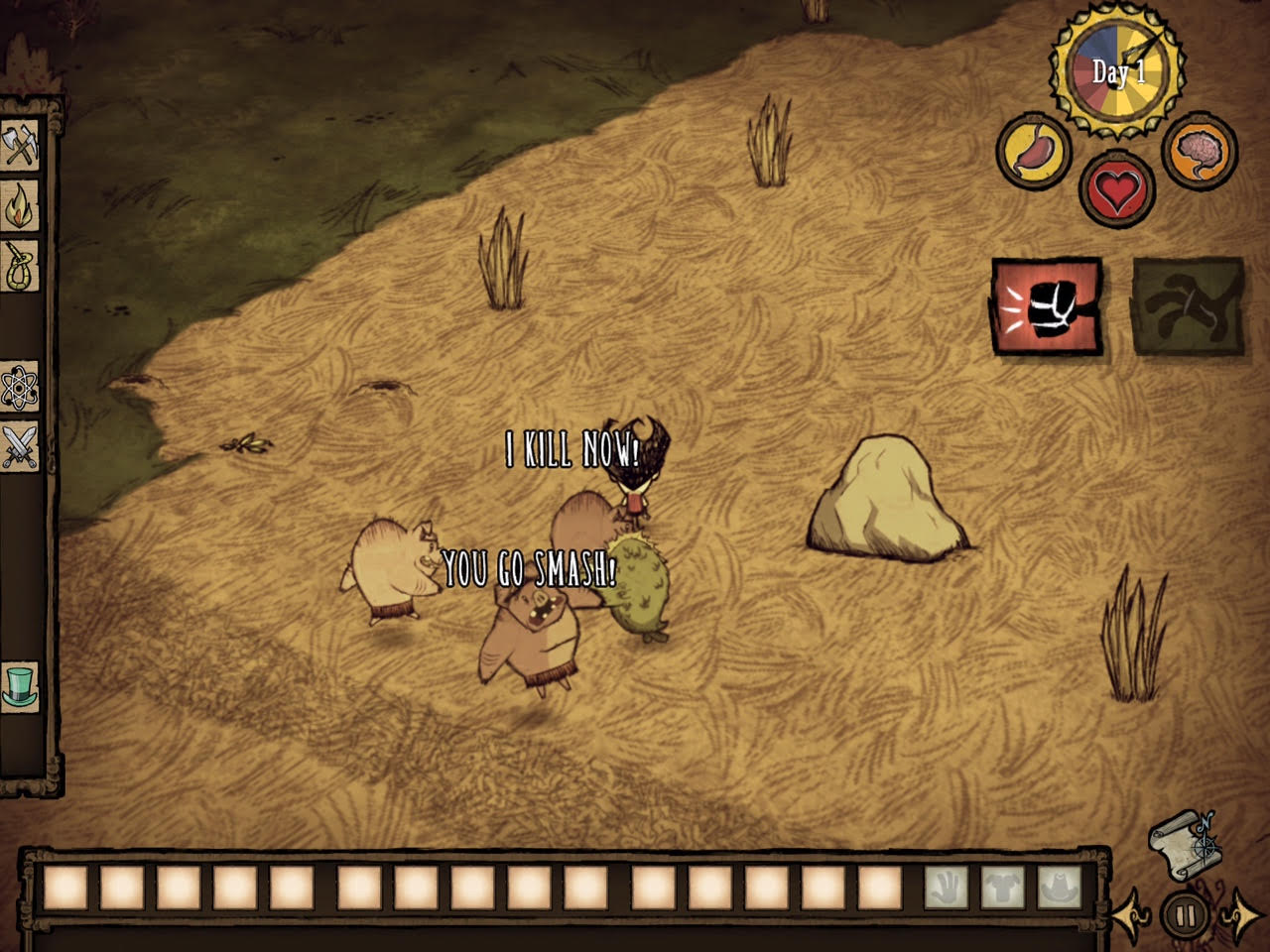 The game’s absolutely fantastic art style and music enhance the peculiar, haunted feel of Don’t Starve. The game’s style is the closest to a Tim Burton movie I’ve ever seen in a game. The environments and characters look pencil-drawn, and the style has such whimsy that you occasionally forget that all those lovely creatures are out to disembowel you. The game has a variety of environments, which offers plenty of visual diversity. The animation looks slightly clunky, but that makes the whole game look like a playful (but disturbed) child made it out of paper cutouts.

The various effects, like fire, lightning, and rain, all conspire to bring the world to life (while at the same time trying to kill you). The lighting effects are especially lovely, with your torches barely penetrating the thick darkness and the light of your dying pit fire slowly collapsing around you as you run out of fuel. And speaking of the darkness, unlike Minecraft‘s night, which is scary but survivable if you can run fast enough or climb high enough, Don’t Starve‘s night is completely, utterly dark and, definitely, full of terrors. When darkness creeps around you, invisible monsters quickly kill you, which lends the game a feeling of horror that belies its cute visuals. 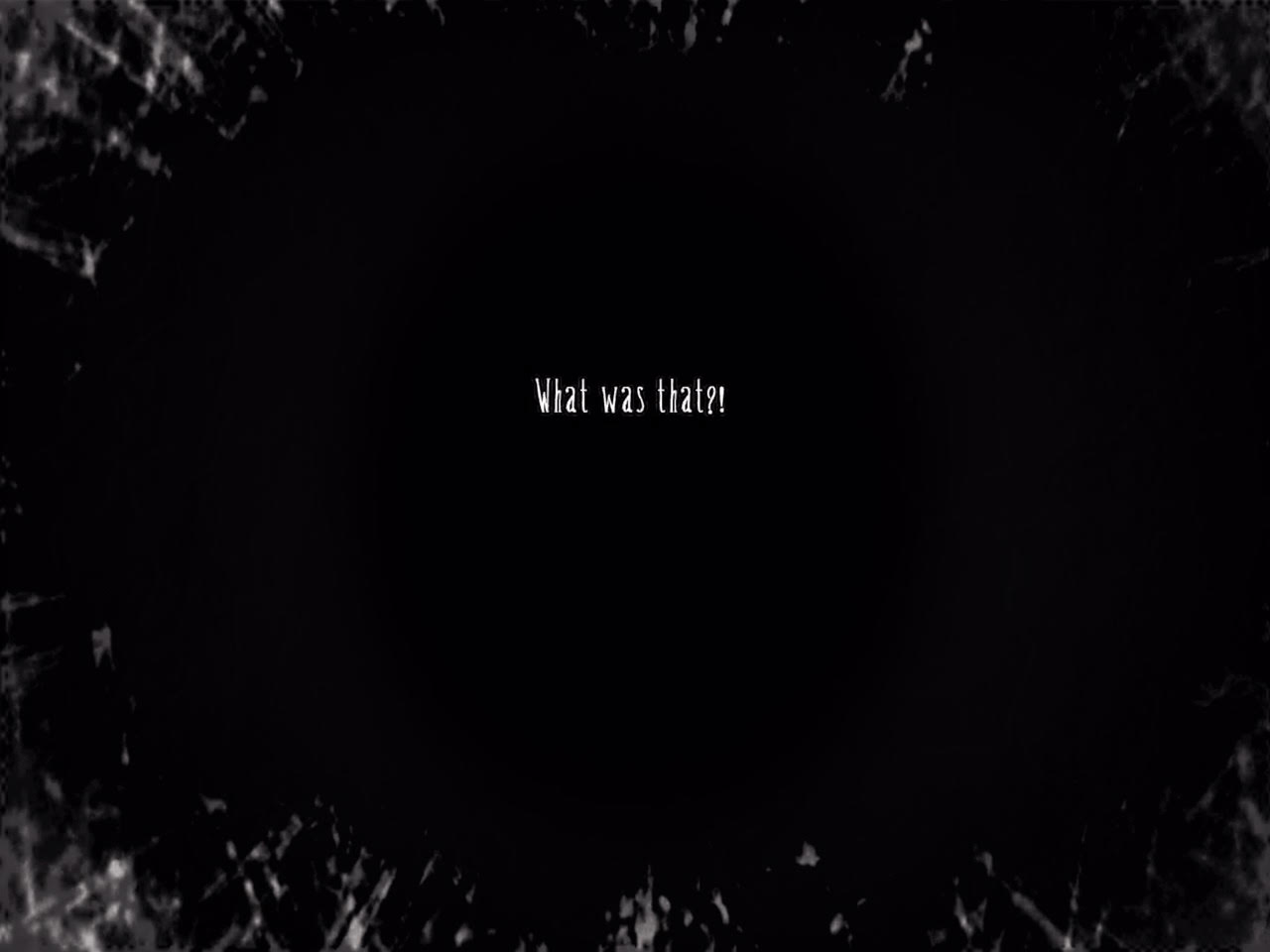 As surviving in Don’t Starve requires plenty of moving around, from gathering resources to, especially, running away from angry bees or charging buffalo-demons, it’s good that you can easily control Wilson as the touch control scheme Klei Entertainment created for the iPad works great. You tap to move, of course, and you tap to interact with the various plants, trees, animals, and so on. I could zoom in and out and rotate the camera, so I had no issues tapping what I wanted to tap. The one issue I had was when trying to add fuel to the fire; sometimes that process would be a bit of a pain because the context-sensitive option to add fuel wouldn’t appear. Other than that, though, the various options would appear at the appropriate moments, for instance when Wilson was close enough to an item or machine.

The Inventory system at the bottom of the screen works well and helps you promptly access what you need, although it’s a bit on the small size and might give some people a hard time. The Crafting menu works great, with the various icons on the left side of the screen clearly displaying the many recipes. This menu clearly displays what Wilson can and cannot craft and why, and the game’s icons let you know when you have enough material to build something new. 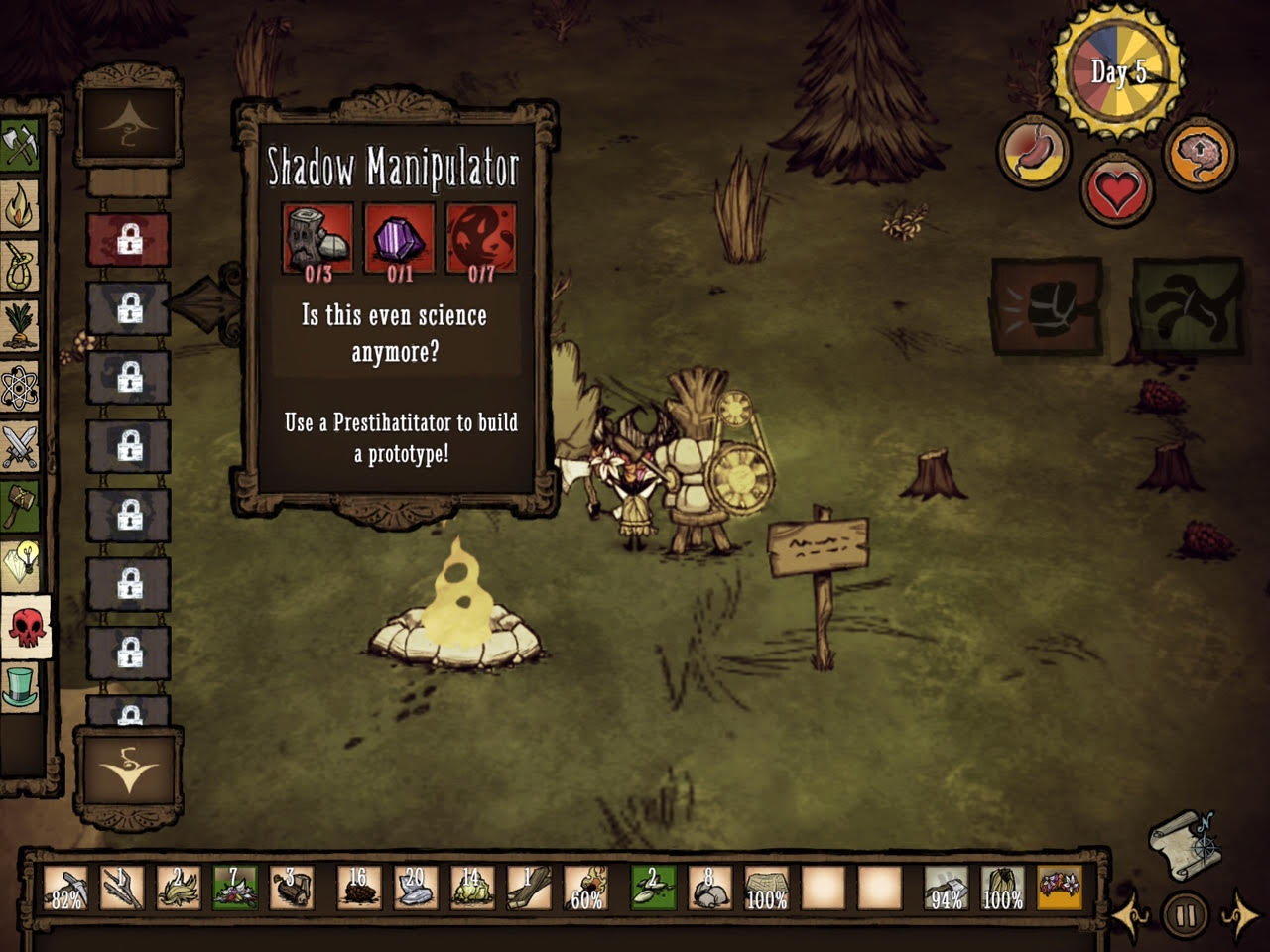 Speaking of crafting, which is Wilson’s primary occupation in the game, I found the whole system much more intuitive than Minecraft‘s (which famously doesn’t offer in-game recipes on the PC version) as it shows you how much of what you need for each recipe. Also, what I liked is how when you approach your science machine for example, all the extra crafting options immediately pop up, much like Junk Jack X and Terraria. The crafting options also reveal Don’t Starve‘s great depth; you start with the basics, like a torch or a pickaxe, and then build such crazy machines as an Electrical Doodad or the Ice Flingomatic.

Additionally, the constant need to improve your situation by moving from the stone age to the industrial age creates a clear gameplay path since you want to see how far Mr. Wilson can ascend; will he reach for the stars, or die trying? Probably the latter. The crafting menu helps you chart a course through the game, which helps remedy the feeling of aimlessness: I need more of X to build more of Y that will help me build Z. Another feature I appreciated about Don’t Starve‘s crafting, unlike similar mechanics in games like Junk Jack X, is that the game doesn’t give you hundreds of little items that end up clogging all your chests and your inventory; Don’t Starve includes enough items for a deep and rewarding game but not so many that you feel overwhelmed. 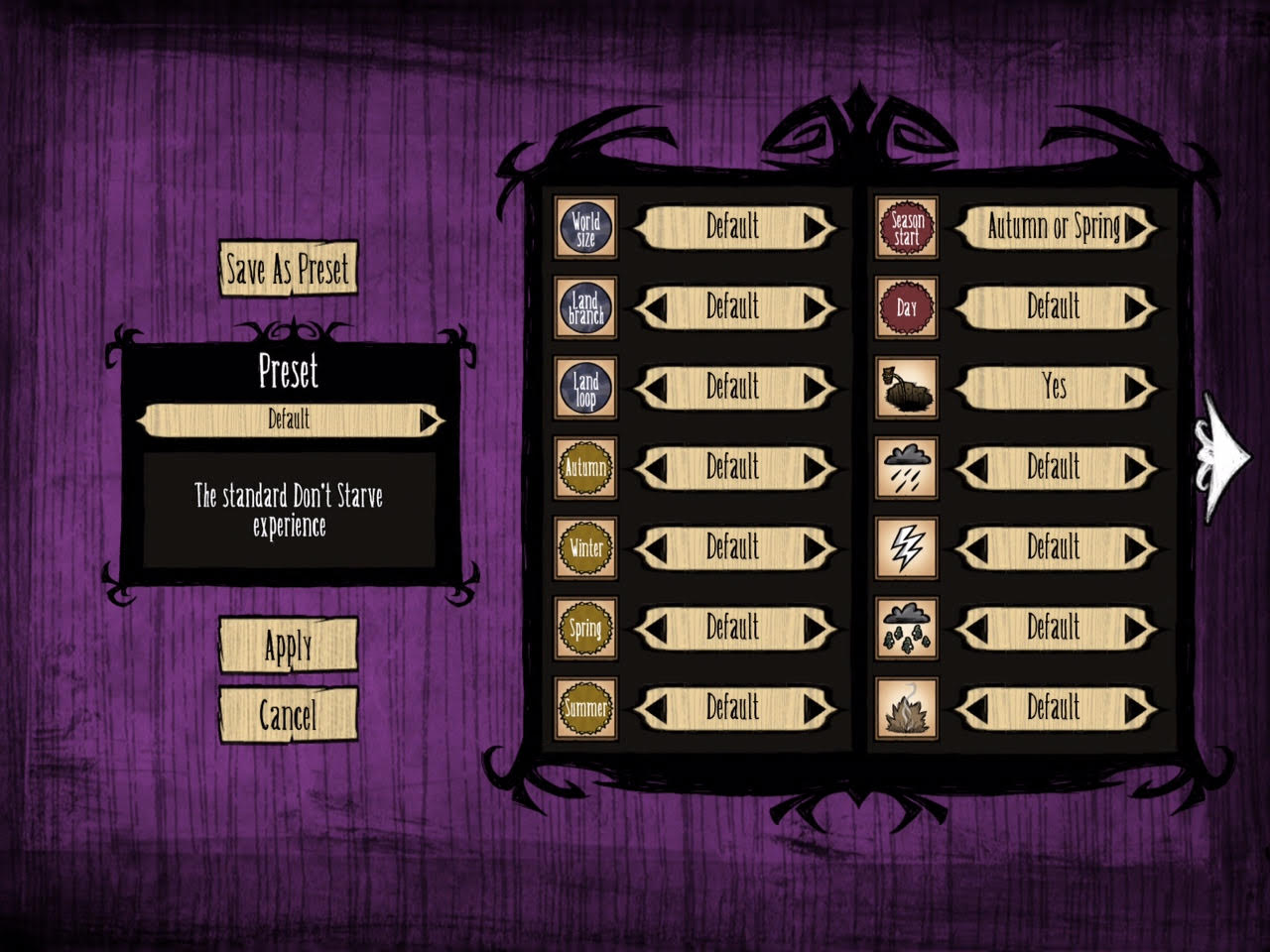 Is Don’t Starve worth your time? Well, if you like survival games or rogue-likes even a bit, then definitely. Don’t Starve‘s peculiar world and deep crafting system invite you to explore and build to the point where you’ll wonder how time flew by. In terms of replayability, other than the game’s sandbox nature, the world-creation screen offers many customization options that include changing the length of specific seasons, changing the size of the procedurally-generated world, altering the frequency of phenomena like lightning storms, and so on. These customization options help players make Don’t Starve as easy or as demanding as they want while also offering plenty of ways to play it.

Also, the iPad version comes with the Rise of Giants DLC already included, which adds the Wetness game mechanic (your wet clothes drain your sanity, and your items can get wet and less effective), extra characters you can play as, Giants, many extra mobs, plants, and items, all of which increase the game’s replayability. Don’t Starve truly stands as an excellent iPad game filled with dread and fun, terror and laughter (Wilson is quite funny), and is a very rewarding experience and a rare achievement that has rightly captured so many gamers’ attention. The game costs $4.99, which frankly is too low for such a game, and is currently iPad only, although an iPhone version seems to be coming our way. So, go be Wilson, but just make sure you Don’t Starve.