Have you ever had the sudden urge to be a creepy person wandering around in public making people uncomfortable? If so, you are in luck. Magic Cube’s Barcode Knight($0.99) is out and offers you the perfect excuse to wander around and scan random barcodes with your iOS device. Whether you are sneaking around a Walmart or lurking in a McDonalds, you now have an almost semi-plausible excuse for it.

Barcode Knight is a hero building monster fighting gacha machine that pits your hero against typical fantasy trope enemies. Orcs, trolls, ogres, dark elves, and slimes of every shape and type imaginable are all anxiously awaiting a chance to take you down. You spend your time in game fighting, eqiupping gear, upgrading gear, gathering gear and managing an inventory. This sounds like pretty typical RPG fare, except for a few things. First off, you don’t do any of the fighting which sounds weird, but I will get back to that. Second, the game has a very interesting mechanic in that you can scan real life barcodes to spawn monsters. 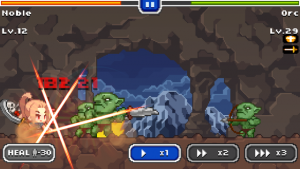 Lets start with the barcode scan thing, because this is probably the most stand out part of this game. You have an energy bar that depletes as you challenge normal monster groups, but for those of you who are deathly allergic to energy bars there is good news. Scanning a barcode lets you start a fight without consuming any energy. You might be thinking “well gee wiz Mr. Fretz, the game isn’t free, why is there an energy bar?" To that question I would say that its actually a nice way to gently suggest people actually use the bar code scan mechanic if they run out of energy. There is a more challenging monster spawn that costs quite a good sized chunk of energy to use and if you are planning on playing for 20+ minutes at a time, the scanner will let you use the expensive spawner without running out of things to do. It’s not a bad balance in my opinion.

With that bit of positivity out of the way, it’s time to talk about the gameplay of Barcode Knight. What makes me sad about this game is I have literally a single button that I can use during a combat. Now you think it might be an attack button, or maybe a dodge button, but it is not. The only button that you can use during combat is a heal that takes a hefty chunk of energy out of your pool, and you can only use it once per fight. 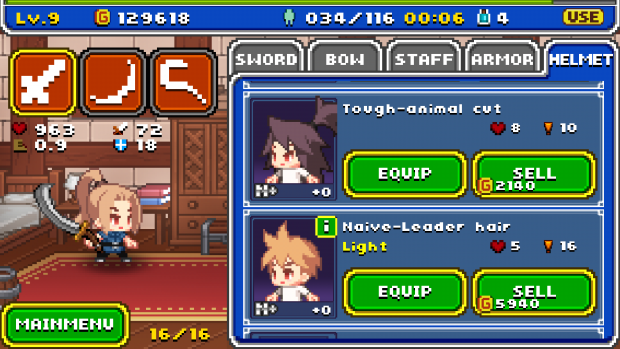 Let me explain a little more. Combat in the game starts off with your hero and any ally at the left side of the screen and your enemies on the right side. They start to walk towards each other, ranged attacks trigger once in range, melee attacks trigger once in range and any characters hit will get bounced backwards. Sometimes critical attack effects like stuns or extra damage will trigger and eventually one side will lose all their hit points. At level 10 and level 30 you get fast forward options to make combat go faster, but will not directly impact the actual result. If you noticed, at no time did I say anything about controlling any of the action and that’s probably my least favorite part of this game. You set up your character with weapons, armor and a cool hairdo, and then you sit back and watch the game play itself. Sure you have a heal button that is almost 100% of the time not worth pressing, but other than that, this is basically a paper doll simulator. 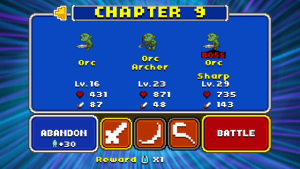 I don’t necessarily hate paper doll simulators, but I feel like there was a missed opportunity for deeper gameplay with Barcode Knight. I really enjoyed walking around my office looking for stuff to scan, and the graphics and music are both going to trigger a little pixellated nostalgia for those mid-90’s Super Nintendo era aesthetics. There is just no meat under the hood of the game that will keep you drawn in. It is sort of telling that really the only thing you can do to the combat of the game is to get it done with faster.

Ultimately you are going to buy the game for the barcode gimmick. It’s fun and how much fun you derive from it will almost directly translate into how fun you will have with the game on the whole. For me it was worth an hour or two of entertainment and the game got tired pretty quickly after that. If you love pixel graphics and you love scanning bar codes, please add a star to my score. I got my money’s worth but not much more than that.