Let me start this review by apologizing for its tardiness. I’ve been kicking this down the road for weeks, mostly because I’ve been kicking the game itself down the road for weeks. I’ve been doing that because playing Always Sometimes Monsters ($4.99) is not fun, or exciting, or even remotely enjoyable for me. A great deal of that is intentional design. Some of it isn’t. The terrible mobile UI is likely not meant to be a commentary on anything, for example. Nor are the technical hiccups that occur during many mini-games. Beyond that, however, the game itself is not looking to give you a good time. It’s essentially a series of depressing choices between bad options where anyone and everyone is ready to spew out a fortune cookie at you unsolicited. Being an iffy port of a divisive game, it’s both easy and hard to review at the same time. Hence, the feet-dragging.

That being said, we can only put off the things we don’t want to do for so long, so here we are. Always Sometimes Monsters has a story to tell, and its vehicle for doing so is apparently RPG Maker. It’s been interesting to see that engine take off as a tool for storytelling, because it nicely demonstrates that sometimes the imagination is the best director of them all. Anyway, you play as a writer who in the prologue seems to be rising to the top of the world. We then jump forward a bit in time to find them a month behind on their rent, dumped by their significant other, and extremely late on living up to their end of the book deal they signed. You’re at rock-bottom, in other words, and it only gets worse when your ex invites you to their wedding at the end of the month. You head out into the world to try to make some money to survive, travel to the wedding, and maybe even not look like a total failure to your ex. It’s a world full of choices, and the gods of this world favor irony and coincidence, to be sure. 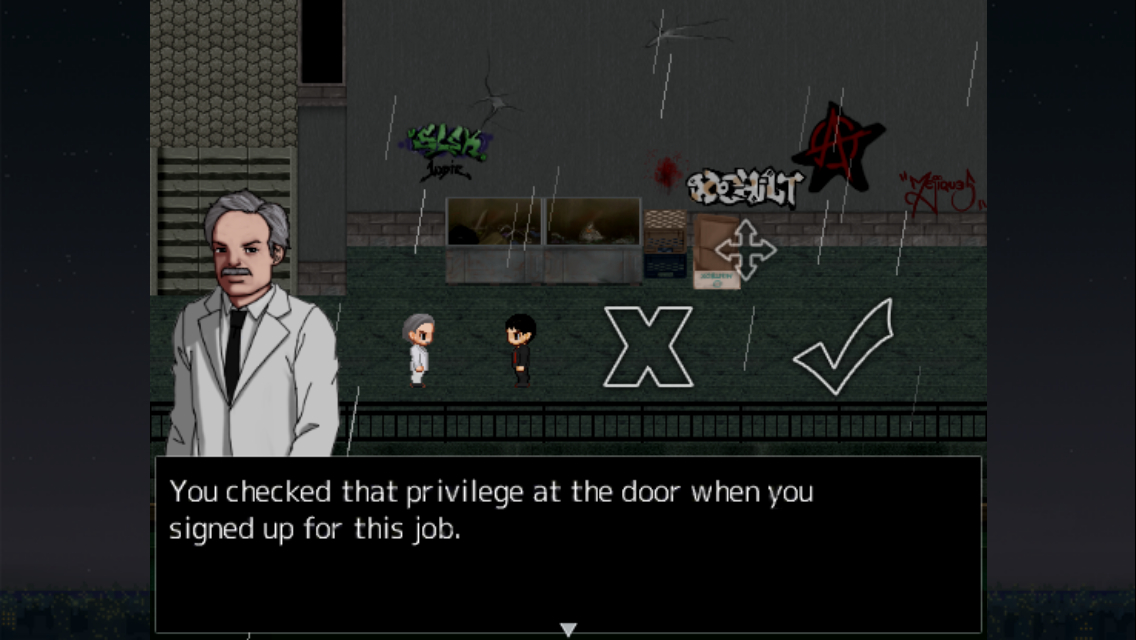 In total, the game is about eight or nine hours long, and there are lots of different ways it can end, some happier than others. The influence of your choices are immediately apparent in some ways, such as the gender, race, and sexual orientation you choose for your main character, while others take a bit longer to manifest, but they’re all important in some way. It’s interesting to see where everything goes, and for once, if the ending is predictable, you have only yourself to blame. The game also features a number of mini-games, many of which are intentionally repetitive and mind-numbing. Some of the ones that are supposed to be more fun are spoiled by the bad transition to touch controls. The mini-games were a good way of breaking up the monotony of what is otherwise a story-heavy game of walking and talking, so it’s unfortunate that they don’t come off as well here as they did in the PC version.

I found the game’s overall plot to be interesting and engaging, and the choice system works well. You have to make some heart-wrenching decisions at times, and the outcomes are often awful. It’s a shame that the actual writing isn’t where it needs to be to make the proper impact. Although the flaws and foibles of the people you meet in Always Sometimes Monsters are deeply human, nobody really talks like one. The prose is overly flowery when it’s trying to be serious, and leans too hard on in-jokes when it’s not. While the game does a good job of avoiding overt preaching, it feels like everyone in the game wakes up each day ready to read a passage from the big book of philosophy cliches. Few characters if any manage to develop a unique voice, so it ends up sounding like you’re being talked at by one person wearing dozens of faces. There’s perhaps an easy narrative justification for that, but I don’t imagine it’s meant to be like that. Even with the odd writing, though, it’s certainly worth sticking things out for the story experience. There’s some real heart in it, even if generally sounds like pages from a self-help book. 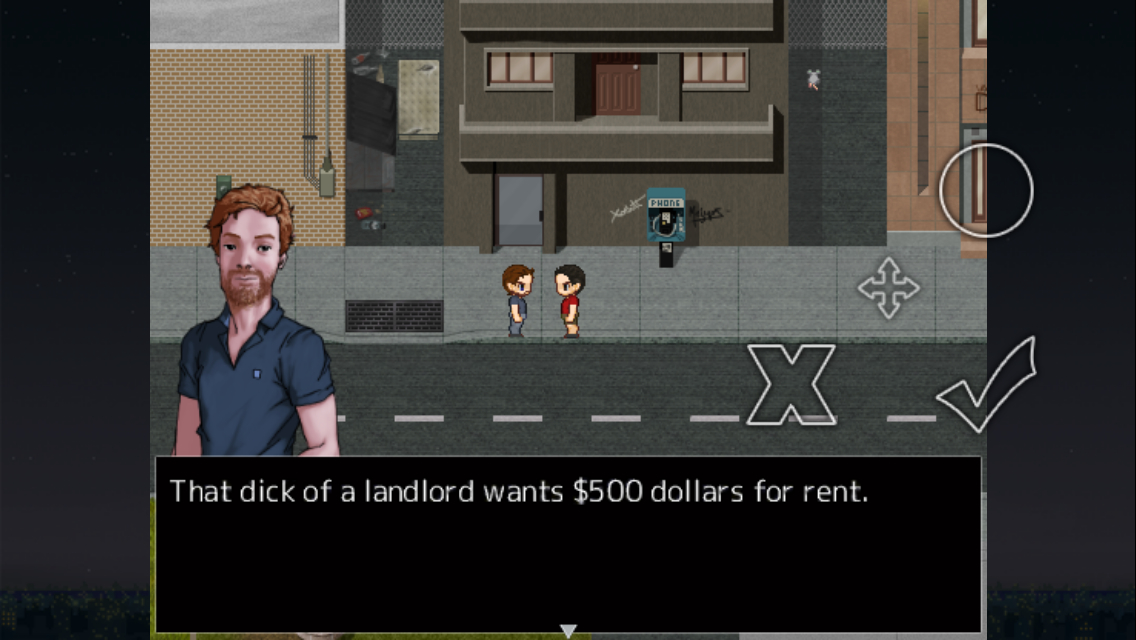 It’s easier to state my feelings on the quality of the port to iOS. Simply put, it’s not very good. Everything works, I’ll give it that. That’s about the nicest thing I can say for it. The UI opts for virtual buttons, which isn’t that surprising or disappointing, but there’s a big difference between good virtual buttons and bad ones. The biggest issue here is that the buttons are always in a movable state. Not being able to move UI elements around is the pits, but having them move around while you’re trying to use them isn’t a whole lot better. The virtual buttons also happen to be your only means of interacting with the game, so you can’t simply touch menu options, for example. The game also suffers from performance problems on both my iPhone 5S and iPad 4, with frequent stuttering whenever the music loops back to the start. I’ve heard RPG Maker doesn’t port well, so that’s probably the reason here, but reasons don’t do much to fix problems.

Think of Always Sometimes Monsters as a visual novel with justifiably tedious gameplay sequences binding everything together, and you’ll be in the right frame of mind to accept its strengths. While I found myself invested in the story, just about every other aspect of the game made it very easy to put down and hard to come back to. I don’t like moving boxes from one side of a room to another using badly-implemented virtual controls, and while I understand that’s the point, it doesn’t make it any more easier to swallow. If you’re looking for a good story, are willing to put up with some technical issues, and most importantly are okay with the idea of a game deliberately not being fun, then you might find Always Sometimes Monsters to be up your alley. I suppose I’m glad I experienced it, but I’m not sure how much I’d recommend the game, particularly this clunky version.