I get a lot of weird press releases, particularly as both my personal email and [email protected] seem to get added to virtually every marketing mailing list in this solar system, but this latest one might take the cake. To set the scene on this particular news story, I should just come out and say it: The only crime I commit these days is reading internet comments, and my circle of friends is similarly law abiding, so I don’t really have much inside knowledge on what jails are like aside from the highly dramatized version of what you see in TV shows set in prisons. (Fun Fact: Carter and I live reasonably close to the prison used in the first season of Prison Break.) Mobile technology is rapidly evolving, and seeing market penetration in all areas of the world a rate that’s mind boggling, so with that in mind I suppose it shouldn’t be much of a surprise to find that there’s companies out there specifically building tablets targeted at inmates. 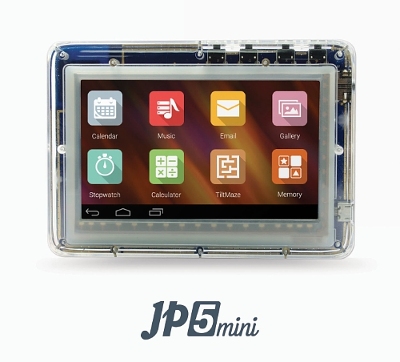 JPay’s latest release of the JP5mini, is the evolution of their JP4 platform which according to the press release is already in the hands of 60,000 inmates. This latest iteration is powered by Android and comes packed with WiFi to “accommodate facilities that are transitioning to wireless networks." It’s got enough battery for 35 hours of music or 12 hours of video, but only has 32MB of onboard storage. Like other prison electronics, the JP5mini is housed in clear plastic to prevent any kind of contraband smuggling. It sounds like it’s built like a tank too, as the JP5mini is capable of withstanding a 30 foot drop, all for around $70.

The operating system is totally locked down, and communications to and from the device are heavily monitored, but next month JPay plans on opening up an App Store for the device which will allow inmates to download both games and educational apps on to their tablets. Motherboard reviewed the JP4, which came loaded with two games: A sudoku game and something called PushBlock. No one seems to be talking about what kind of games will be on the JP5mini’s App Store, but since it’s running Android it seems like there could potentially just be a mountain of potential releases available. But, unless the device has a SD card slot (I can’t find detailed specs anywhere), developers are going to be pretty limited by the 32MB onboard storage.

If it does have a SD card slot though, could prisoners be the next target market for free to play developers? How wild would it be to get smoked out in Clash of Clans (Free) or be getting Candy Crush (Free) lives from someone in jail? I mean, don’t get me wrong, I’ll take Candy Crush lives from anyone…