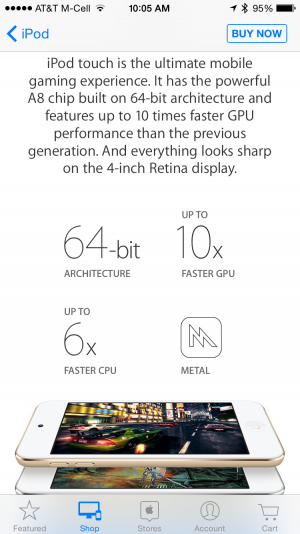 We’ve spent a ton of time on our podcast debating just what Apple is doing with the iPod touch. It seemed like following the birth of the App Store what pushed iOS gaming forward in a big way back when iPhones were real expensive and not that popular was the iPod touch. In the early days of TouchArcade, most forum members gamed exclusively on a first or second generation iPod touch. In recent years, however, Apple had sort of left the iPod touch die on the vine without any kind of hardware updates… Until today, anyway.

The new 6th generation iPod touch basically catapults the platform forward to what seems to be in line with other modern iOS devices. It gains a 8 megapixel camera, a A8 64-bit processor with an upgraded GPU capable of supporting Metal, all the same M8 motion tracking found in recent iPhones, 802.11AC WiFi and comes in four different loads outs: 16GB for $199, 32GB for $249, 64GB for $299, or 128GB for $399.

Until people get these devices in their hands and start benchmarking them it’s hard to say just how powerful their internals are as Apple’s marketing with new devices often feels a little misleading with charts that are labeled weird to exhibit just how much faster the new product is compared to the old one- In this case, it’s “up to 6x faster" with “up to 10x faster GPU." The old iPod touch was pretty damn slow by today’s standards, so, 10x that… Might not be so impressive, but, we’ll see. Regardless, since the iPod touch has been untouched by Apple since 2012, anything they throw inside of the new one is going to be several orders of magnitude better than the old one.

What’s strange is they’ve kept the old 4" screen, so, as the developer of Zombie Highway points out:

If the A8 in the new Touch isn't nerfed, the touch would be the highest performance per pixel mobile device Apple makes.