I don’t know about everyone else, but for my money, the best part of using a tomb-raiding setting for a story is when the main character has to escape from a collapsing death-trap. I’m not sure why ancient civilizations would rig things to collapse in such a precise and deadly manner, or how annoying it must have been when they were setting it up and Bob accidentally tripped the whole thing just before the last piece was set, but watching someone try to outrace a series of perfectly-timed traps lest they be buried in the very location they sought to loot never gets old. With the rise of Indiana Jones happening almost in step with the booming popularity of early home gaming, it’s not surprising we’ve seen many interactive takes on the concept. When it’s done well, it’s just as exhilarating to play as it is to watch. Trappy Tomb (Free) is a relatively simple game that focuses exactly on that kind of escape sequence, and while it has some issues, a few clever ideas help smooth things over.

Basically, Trappy Tomb is an overhead platformer. You run your little guy around, jump over pits, collect golden idols, and jump-kick bats and other creatures. He’s a little slippery to control, but if you take your time, it’s not hard to get around the various obstacles in the tomb and escape. Unfortunately, you don’t have time to waste, as a two minute timer starts to count down the minute you take control. You simply have to move fast, as there’s no way you’ll make it to the end if you don’t. That means dealing with the character’s slippery feel and picking your battles when it comes to slowing down. You can shave a lot off of your time if you pass up golden idols, but the idols act as a sort of currency for unlockables. They’re the only thing that persists from game to game, so it’s hard to completely ignore them. Plus, they’re golden, so what can you do? 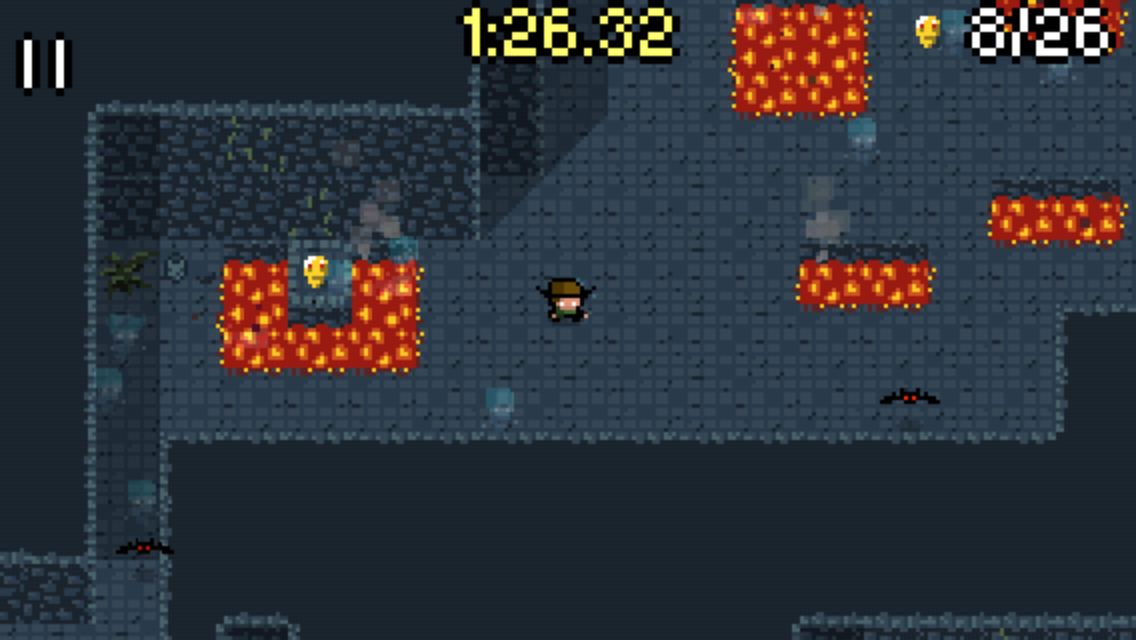 At the moment, the game only has two different maps to play on, and one of them unlocks only with an IAP. Apparently, the next update will add the ability to buy new levels using the golden idols, giving players the chance to enjoy the whole game for free. Now, two or three levels might be a lot fewer than you’re used to in a platforming game, but it’s probably better to think of Trappy Tomb as a racing game, with the levels being tracks that you have to get to know intimately. Of course, that all starts with being able to make it to the end in the first place, but after that, you’ll need to be on the lookout for any chance to whittle your time down. Luckily, you’ll have an awful lot of help with that.

Trappy Tomb describes itself as ‘mingleplayer’. What that means is that you can see the ghosts of dozens of other players as you make your way through each level. Sometimes when you pass by a location where someone died, a short message will pop up. It’s somewhat similar to the system seen in Demon’s Souls and its ilk, though obviously a lot more limited in scope. Watching the crowd will show you the safest path, but it’s the outliers you’ll really want to keep your eyes on. Some of them are merely suicidal fools, but the others? They know something. Something you’ll surely want to know, too.

Just as it does in From Software’s massive hit franchise, this simple social element helps spice things up by making it feel like you’re not alone in the game’s world. In a game that is basically a time attack, having your competition right there in your face greatly adds to the tension, especially in tricky spots where you can see the deaths and anguished messages start to pile up. We’ve seen similar features to this before, of course, but it really works well here. When you die somewhere and see lots of others falling at the same point, it feels less frustrating. When you make it past a section that few seem to be able to, it gives you a boost of confidence. Trappy Tomb would still be enjoyable without this feature, but it’s certainly much more satisfying for having it. 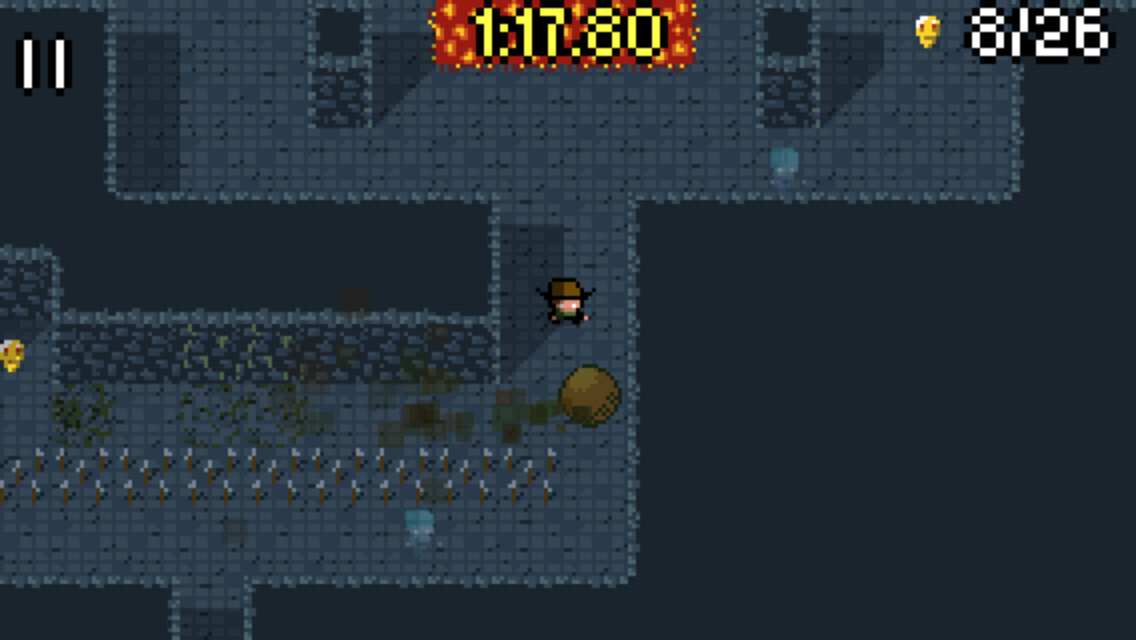 This feels like a game that should have a bevy of fun unlockables, but at the moment, there are just a few extra characters to grab with your golden idols. They’re a little on the expensive side, but you can take advantage of incentivized ads to get them fairly quickly, if you like. After that, there’s not much to do with your idols but save them for the upcoming update with the level unlocks. I’m not sure what exactly I’m looking for, but it does feel like there’s an opportunity for a richer metagame here. The Game Center leaderboards have to do most of the heavy lifting in terms of replay value, with the achievements also feeling a bit underwhelming. The game does offer support for Kamcord if you want to share videos of your runs, which is pretty cool.

As I’ve already mentioned, the controls are a little bit slippery at times, but I tend to think games like this benefit from those kinds of quirks, so long as they’re consistent. You move your character around by moving your finger or thumb around on the left side of the screen, and jump by tapping the right side. Your only means of attacking is by jumping at your enemy. If you connect while you’re in the air, you’ll deliver a deadly jump-kick. You might not see the jump-kick, as the graphics are very simple, but trust me, there’s a jump-kick. There’s not a lot to the controls, but I think they need to be that way because the levels themselves are merciless and leave little room for error.

While the visuals are pretty plain, with nicely-detailed but repetitive backgrounds and low-detail character sprites, everything runs buttery-smooth, which is pretty impressive when you consider the number of ghosts running around on-screen most of the time. The sound design fares a bit better, with the hurried footsteps and the little tune that plays in the background setting the tempo well. Ultimately, both the visuals and the audio do their job in making hazards clear and signalling when you’ve hit switches. Although you probably won’t be showing the game off to the person next to you at the coin laundry for its presentation, it’s at least practical in that regard. 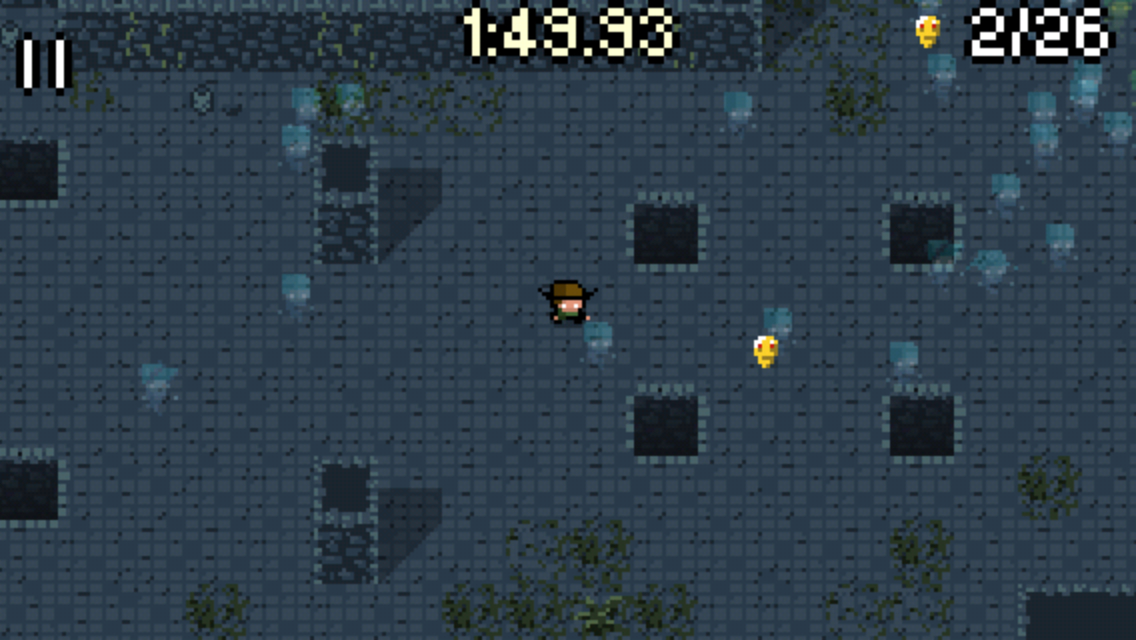 Trappy Tomb is a bit of a light bite, but for what it’s going for, it’s quite well-done. How long it lasts for you is entirely dependent on how much you get into competing for times, because there’s little else to keep you coming back otherwise. It’s fun to play, has a neat hook, and asks virtually nothing from you in return for the first half of its content. If you enjoy time attack games and don’t mind a stiff challenge, you’ll definitely want to give Trappy Tomb a look. It can be a little bit frustrating at times, but at the very least, you can share your misery with others. Somehow, that makes it feel a lot better.