Riverman Media’s latest game The Executive ($2.99) is a masterpiece. The new game from the creators of Pizza vs. Skeletons ($2.99) is brilliantly absurd and absurdly brilliant. Riverman has combined a touchscreen-friendly brawler with an idle clicker, all set in an absurd universe full of things like wolves wearing Guy Fieri shirts, and featuring a distinctive art and animation style. It’s an amazing game, and you need to play it.

Each level has you controlling the eponymous executive, a human businessman in a business world that’s gone mad. Like, frogs in tuxedos with rapiers mad. So, you, Mr. Executive, must run from battle to battle by performing swipe-based stunts to refill your SP bar, which is used to perform special moves in the fights, which are the meat of the game. You’ll be taking on many absurd creatures, with the ability to deal out different free attacks, use special moves that require that SP bar to be filled up, use special abilities like block-piercing, and of course, to block. 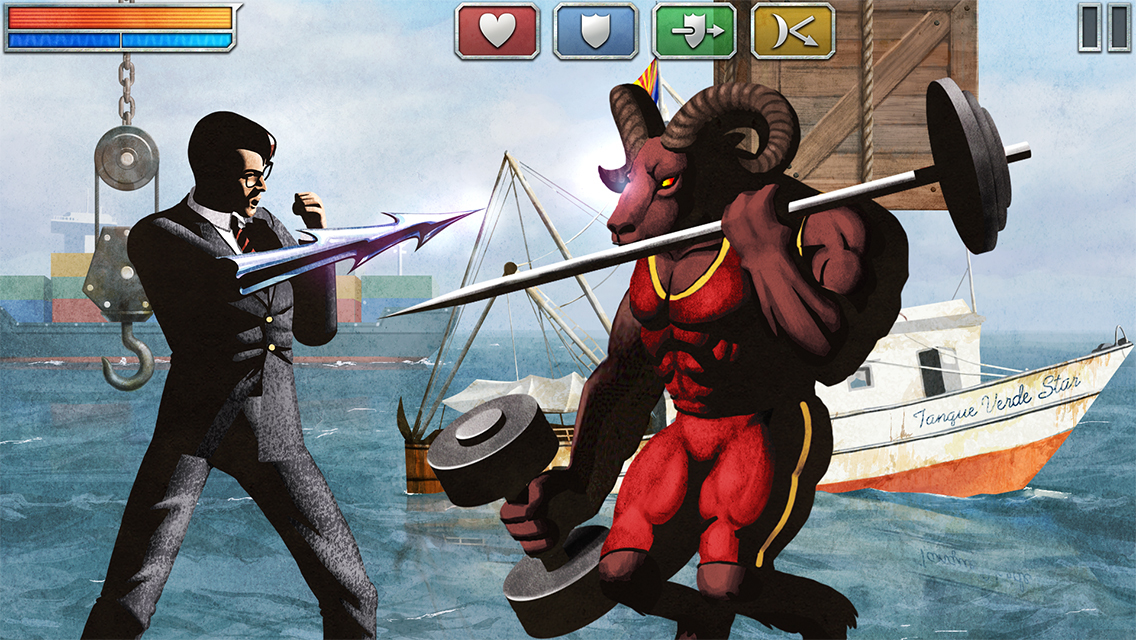 Each enemy has their own elemental resistances and different attack patterns, so you have to learn how each of the enemies works, though a helpful bestiary is provided. You’re graded based on different criteria, including accuracy of stunts, how often you got hit, and more. The money you earn goes not just toward character upgrades, but also to business aspects, much like an idle clicker. These earn you money while you’re playing and even while you’re not playing. Plus, they give out ever greater rewards for end-of-level bonuses, making replaying earlier levels more and more lucrative.

The Executive is a gorgeous game, with a unique art style, to say the least. The way that the animations are somewhat stilted yet still fluid is a clever look. But the style of the game overall just feels great. It’s a wonderful example of absurdity. The game is just ridiculous from top to bottom, what with the ballerina bats, lumberjack werewolves, and armored skeletons to fight, all in the same game. But the game never stops to say “oh, how silly this is!" It plays the entire experience straight, and that means a lot, because the game lets you revel in the silliness, and enjoy the unexpected factor of what might come next. This is a tough thing to nail in any form of media, as it’s possible to go too far (Kung Fury) or not far enough (the Will Ferrell Lifetime movie A Deadly Adoption). The Executive makes the weird normal while never letting you forget to enjoy how weird it is. Even the mention of the location of “Port of New Tucson" says a lot about what kind of universe the game now takes place in. 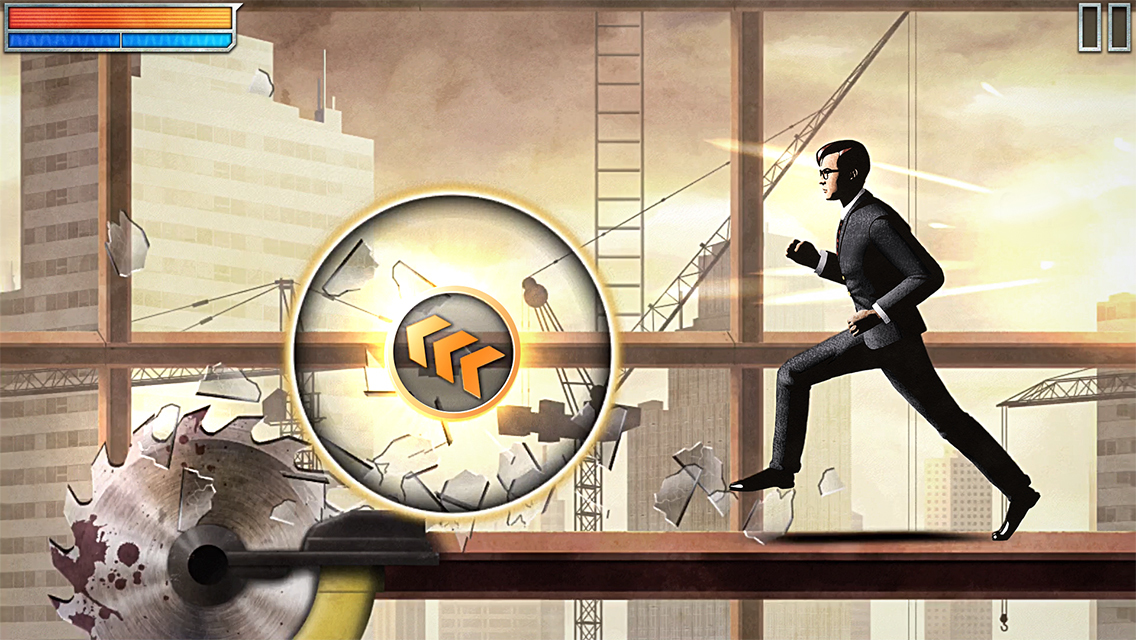 The game instructs you to play with a single finger pointing toward the screen. This is important because it feels like the natural way to play would be to do so with two thumbs on a phone. This might not feel the best, but it makes sense why the game works this way. Sometimes, using two thumbs feels better for swift blocking, and early on, it makes the most sense. But as you start having to do fierce attacks, and the different special moves, it becomes clear why you need to use a finger. There’s just too much to do, and with practice, you’ll learn to go from blocking to attacking and back in an instant. This game perhaps works best on an iPad propped up on a table versus with the iPhone, but it’s playable without issue on either. I do wish there was iCloud support, though.

While they’re not the most comfortable, in practice The Executive‘s controls are a fantastic example of how a game can work and be ideal on a touchscreen. Instead of using a complicated array of buttons and directions, you have logical sets of taps and swipes to use. This game feels best on a touchscreen. Everything is logical in how you execute it. I don’t think this game would be anywhere as good on any other input device. There are some issues with accuracy, as the difference between a fierce attack and a flaming kick in the heat of battle is slight. But this feels like a great touchscreen game. 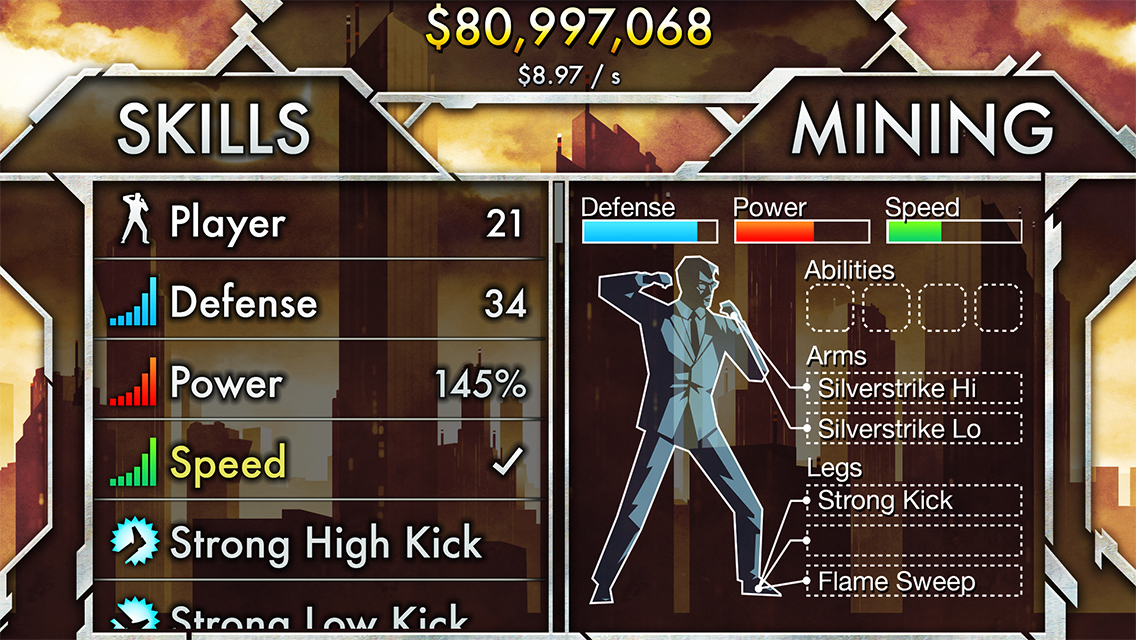 The idle clicker elements of The Executive are clever, too. You earn money while you’re not playing, which is fantastic if you get frustrated and want to step away from the game for a while. Afterward, you might just have enough money to buy that upgrade you need. But the different things you buy for your business also reward you for different things, like giving you more money for blocks, or rewards for different moves you use. This makes replaying earlier levels for higher ranks a lot more fun than it would be otherwise, because you can make a handsome profit off of them. Monetary rewards aren’t just centered around the level, but your upgrades. Granted, this means that getting higher ranks on a level becomes easier the more powerful you are, but there’s still punishments for taking blows. You have to play with intelligence.

And that’s the thing: this game rewards you if you play well. Not just in money, but in satisfaction. Taking care of an enemy by fighting it several times, and learning its weaknesses to dispose of it with great haste? That just feels good. The enemies can be tricky to figure out at first, but with practice, and smart play, you can dispatch them. And because the enemies all fight in such different ways, the game just does not get old across its 120 levels. Plus, with the different strategies with enemy sequences in each level and the occasional two-on-one fights, there’s just so much variety. And that’s without mentioning the stunt swiping, which didn’t necessarily need to be here. But hey, jump-kicking through a wall, and as a way to keep the transitions from battle to battle interesting? I welcome it.

The Executive is one of the best mobile games of 2015, and is something that you need to play. It’s so amusing and so much fun, that you’re doing yourself a disservice by not playing it.