I hold two very strong opinions about the Dragon Quest series, one of which is agreed upon by many, and the other of which is slightly more controversial. First, Dragon Quest is like pie in that there is no bad one. My least favorite is either Dragon Quest 2 ($4.99) or Dragon Quest 8 ($19.99), but I’d still hand over a weekend to replaying both, no questions asked. With that being said, the other thing that I believe is that the series hit its creative peak with Dragon Quest 5 ($14.99). That’s not to say subsequent games didn’t sometimes hit some very high notes, as my pie opinion shows. But if there is such thing as a work that a creative mind invests in so completely that they leave a big piece of themselves with said work forever, Dragon Quest 5 would be a huge example. That’s an ominous way to begin a review of Dragon Quest 6 ($14.99), I’ll admit, but I felt it was important to be upfront about that. 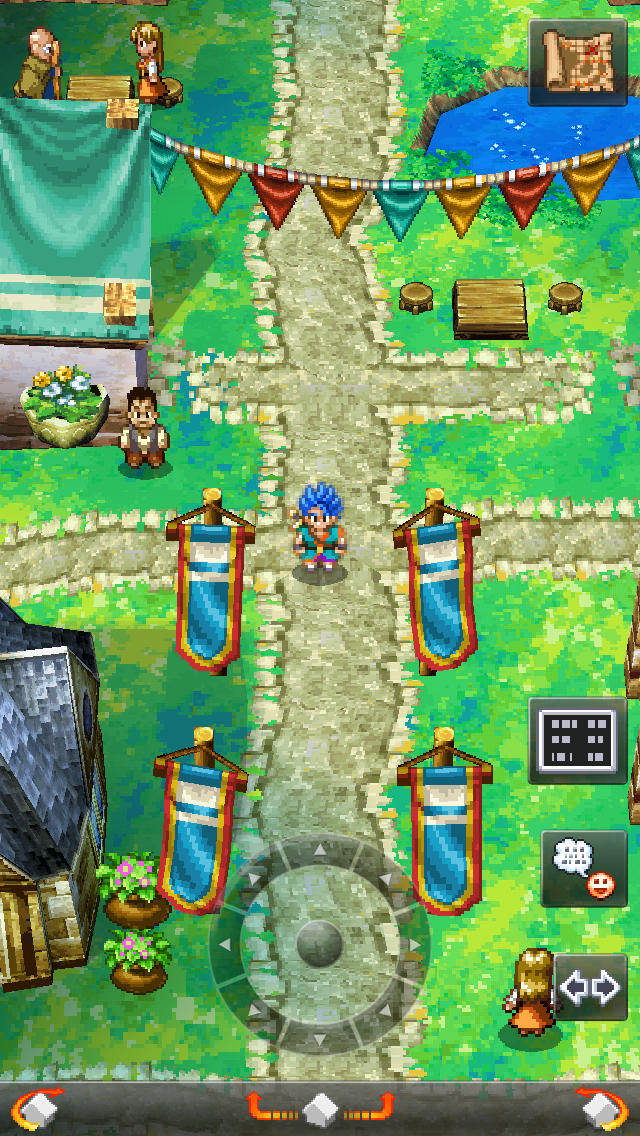 Over the course of the series, some patterns about the kinds of stories Dragon Quest tends to tell emerge. Creator and scenario writer Yuji Horii is a fan of bittersweet tales, with Dragon Quest 5 perhaps being the ultimate one. Typically, however, those kinds of stories work best when they’re short, and as the series has progressed, the games have become increasingly focused on these little vignettes to the point that they’re generally more interesting than the main plot. Dragon Quest 6 is where the balance officially tipped in favor of those mini-stories, I think. The other thing the series is concerned with is the nature of a hero. In the first couple of games, Dragon Quest was content to use the cookie-cutter plot of being descendents of great heroes. Starting with the third game, however, it felt like Horii wanted to play with the idea more. Each game after that shifted the hero concept to a different perspective. Dragon Quest 6 doesn’t abandon that theme, and though its take lacks the oomph of the previous game, it still has a lot of interesting ideas.

In Dragon Quest 6, you play as a nameless young hero, whose adventure we seem to have jumped right into the middle of. He and his companions are gathered around a fire, about to storm the evil lord Murdaw’s castle. It all seems to be going well, but once they reach the room their enemy waits in, everything comes apart. One by one, the hero and his companions are defeated, and then… he wakes up, safe and sound in his bed in the sleepy mountain town of Weaver’s Peak. It’s the day of the big festival, and the village chief has entrusted the hero to head to the nearby big city to sell some of the village’s goods and buy the spirit crown needed for the main event. Unfortunately, the person he’s meant to get the crown from has gone missing, and when the hero goes looking for him, he ends up falling into a mysterious hole that leads to another world. He’s seemingly invisible to the denizens of this world, and soon makes his way home via a well. 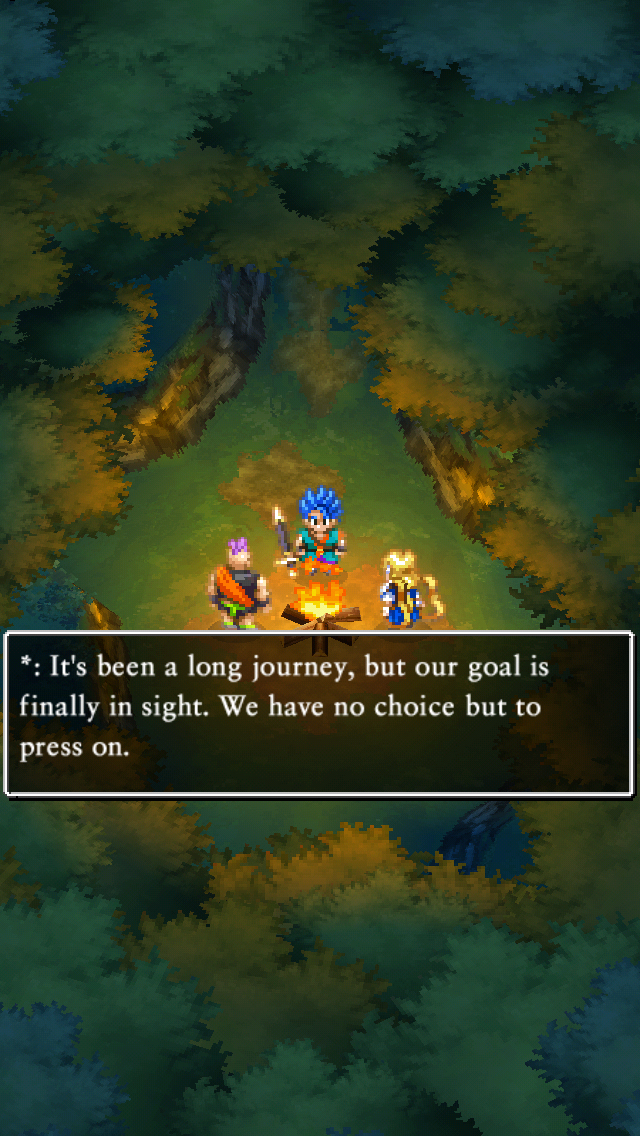 It doesn’t take long before you figure out what’s going on with that other world, and you’ll soon find yourself traveling between the world of reality and the world of dreams pretty regularly. Maybe you’ll even find your way back to the place you saw at the beginning of the game, before you woke up? You’ll meet plenty of companions along the way, and although you can’t recruit monsters the way you could in Dragon Quest 5, there are special slime characters who will join your party under the right conditions. Each character has their own unique personality and a fair bit more dialogue than you might be used to from earlier Dragon Quest games. Yuji Horii and Akira Toriyama were working on this game and Chrono Trigger ($9.99) at around the same time, and you can definitely feel its influence slip in here and there. The characters are a bit more vivid, the set pieces a bit more complex and cinematic, and the feel of the game’s story and world is somewhat unlike the rest of the series at times.

The gameplay, on the other hand, follows the series handbook to a tee. The random, turn-based battles feature the same first-person view with lovingly-animated enemies. Many of the abilities and spells return from previous games, and the overall structure of the game is also quite familiar. The big news gameplay-wise in Dragon Quest 6 is the return of the job class system. You’ll eventually come across the All-Trades Abbey during your journey, and once you do, you’re free to change the jobs of your various characters. Anyone can use any job, but certain characters are better for particular classes based on their stats and equipment choices. Job levels are raised by completing a certain number of fights, and the best jobs require you to attain a particular level in multiple other jobs first. Each new level brings new skills and techniques, and the complete list of these is quite large. The system is a bit grindy, there’s a fair bit of overlap between skills, and certain jobs were rendered a bit useless in the DS remake this is based on, but I’m more than happy with the level of customization it provides on the whole. 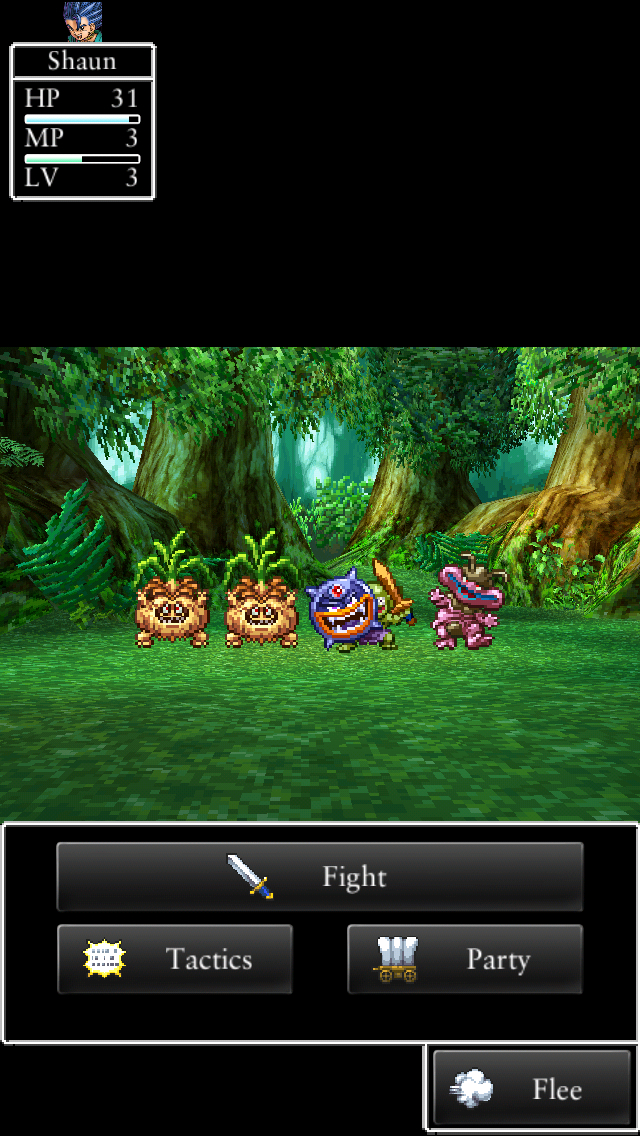 It’s a longer game than the previous titles. While it’s not quite as lengthy as Dragon Quest 8, it’s still around 45 hours long even if you don’t touch any of the post-game content. I’d like to say it flies by, but the middle stretch of the game really feels like a drag. It’s all the more jarring because the game builds tremendous momentum early on. It picks up again well before the end, but the game certainly has pacing issues. I think it feels this way because it’s so focused on its main plot at the beginning and in the end, but spends a great deal of its middle meandering around on vignettes while the main story sits on pause. Horii would get better at weaving vignettes into the main story as the series went on, but he was still working that out here. The vignettes are brilliant, so brilliant that some of them were recycled in later games, but if you make the mistake of getting invested in the main story, you might find yourself resenting the time spent during this portion of the game.

Dragon Quest 6 uses the same engine as Dragon Quest 4 ($14.99) and Dragon Quest 5, a blend of 3D backgrounds and 2D sprite characters and objects. The UI is identical to those games, and the port from the Nintendo DS to iOS is handled similarly, with 3D objects looking more crisp and the soundtrack replaced with something of higher quality. As with the other games in the series, this one is portrait-only, but it does feature iCloud support, something that hasn’t consistently been the case among these releases. Even better, you can make a quick save while you’re in dungeons, something that wasn’t possible in Dragon Quest 5. The animation on the sprites is excellent, of course, and many characters have fluid sequences that are only used once or twice in the whole game. That kind of gorgeous excess doesn’t happen often anymore, so it’s quite appreciated here. I also want to give special attention to the game’s music. Composer Koichi Sugiyama really outdid himself here, putting together one of the best soundtracks in the whole series. 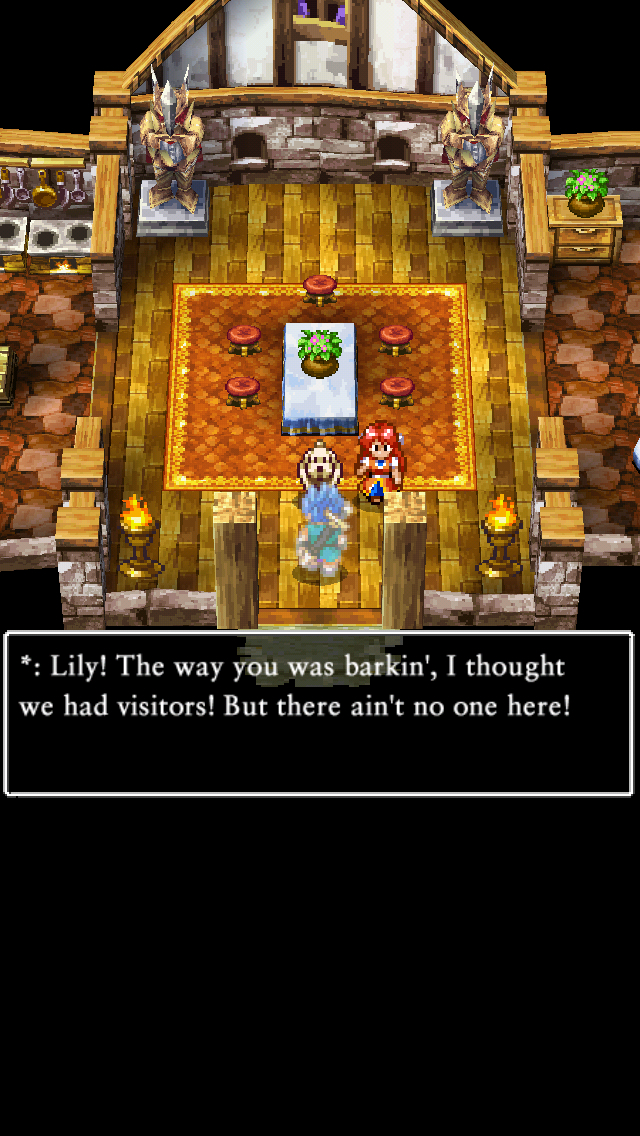 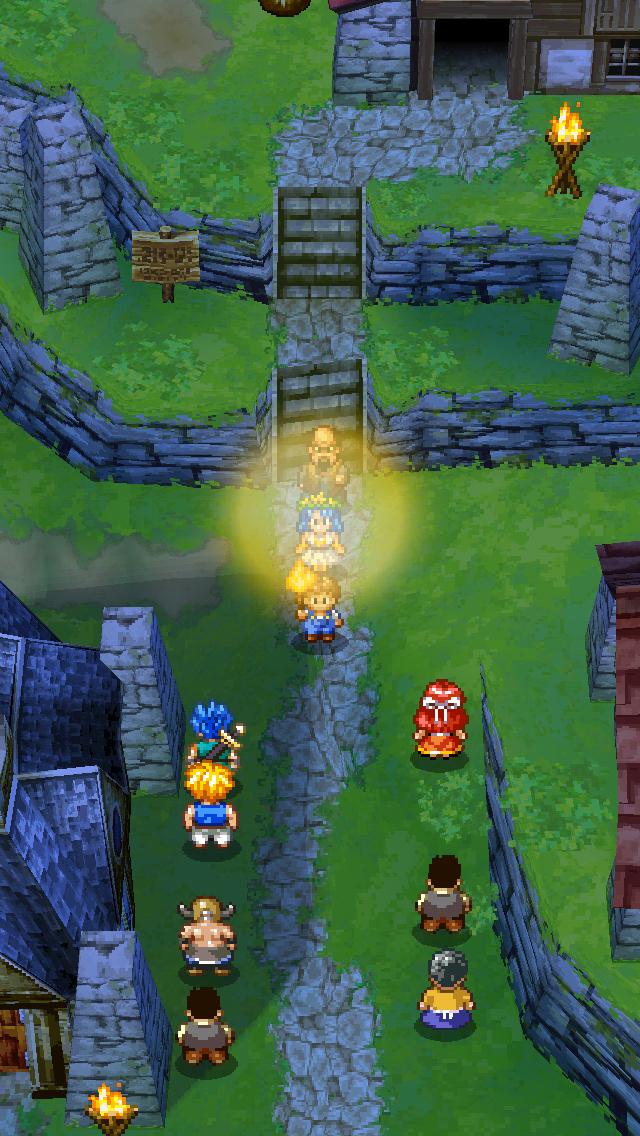 Although it’s got a bit of bloat and the overall package isn’t quite as strong as the previous game, Dragon Quest 6 is still a phenomenal RPG. It features a huge world, tons of memorable characters, some downright excellent writing both in the source and the wonderful localization, and an entertaining customization system. The massive list of skills you’ll compile give you plenty of options to play with in battle, and certain bosses will require you to make the absolute most of them. While it is, in my opinion, the weakest of its trilogy, there’s no shame in coming in third to two of the best JRPGs ever. While I recognize the distinct possibility that iOS owners are getting burnt out on Dragon Quest games, any RPG fan who doesn’t feel that way will certainly get their money’s worth out of Dragon Quest 6.