One of my favorite things about the App Store is how many hidden gems there are that pop up week and week. Sure, there’s a lot more garbage than gold, but that’s what Touch Arcade’s here for: to dip our proverbial pan into Apple Creek and shake it around until we see something shiny. And friends, I may have just struck it rich.

WonderCat Adventures ($4.99) by MovieWriterPro is a beautiful little one-touch platformer that manages to be incredibly fun, despite being absurdly simple. You play as a small 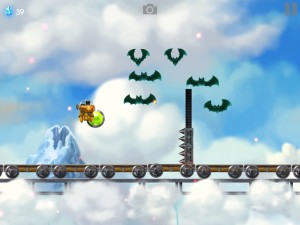 black cat who uses a giant, hopping mech suit to get around (God help us all). Your goal is to get to the end of each level alive, where a crystal portal will whisk you away to the next one. However, since you are limited to only jumping, you need to make use of a series of rolling platforms to get anywhere.

Mechanically, it kinda reminds me a bit of those mine cart levels in Donkey Kong Country. Each time you land on one of the rolling platforms, it automatically scoots forward at a fixed speed. It’s a rather ingenious way to get around the problem most platformers on iOS face: how do you make a game easy to control without real buttons? Effectively, WonderCat gets around this by turning the entire screen into a single button. It’s certainly not the first time we’ve something like this (the word “auto-runner” comes to mind) but the way it utilizes jumping and rolling platforms in every stage still feels clever and fresh. 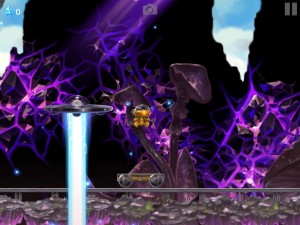 Aside from the game mechanics, the other main thing that sticks out is the art. It’s relentlessly gorgeous, and the developers aren’t afraid to flaunt it (the only other button on the screen besides pause is a camera icon to share a screenshot). The game takes you from crystal mines to clouds in the sky to the insides of a fiery volcano, and I couldn’t stop marveling at how great everything looked. The main character in his little yellow robo-suit looks awesome as well: equal parts adorable and bad-ass. I’m not sure how that’s possible, but if anyone could do it, it’d be a cat.

It took me a few days to complete the game, but if you were dedicated you could probably do it in an afternoon. I found the difficulty to be absolutely perfect, with more challenging stages almost always being shorter so they never got frustrating. In fact, the length of the game (as well as the length of each stage) and the difficulty level are all perfectly balanced throughout, and the only thing I had trouble with was putting the game down once I completed each stage. Once you do finish the game, you can go back and essentially “three star” each level by trying to collect all of the crystals. Sometimes that means taking a different path through each stage, so you’ll even be getting a slightly different experience. 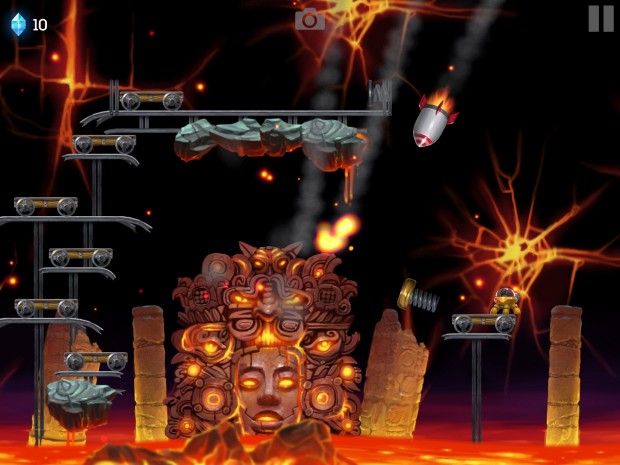 The crystals you collect are only for the completionists out there (and leaderboard chasers), which means there’s no shop with upgrades or new suits or anything. I’m the kind of guy that absolutely loves all that crap, but I didn’t miss it in this game. There’s something kind of refreshingly oldschool about a game that’s 100% designed to be played all the way through with the same exact skills you start with. That being said, if they ever did a sequel or added new levels, I certainly wouldn’t object to more variety in abilities, characters, or suits. (In particular, a hook mechanic would be awesome in this game–but that’s just me dreamin’.)

WonderCat Adventures dropped at a weird time of the week from an unknown developer (whose name sounds like something you’d search for on a sketchy torrent site), but don’t let any of that stop you from checking out this little gem. It’s a platformer that knows exactly what platform it’s on, and rolls with it. One-touch controls, bite-sized levels, perfect difficulty curve, and a visual style that looks amazing on a high resolution screen. I can’t wait to see what this weird little cat does next.