Since I’m sure you’re all dying to know, my favorite iOS game of all time is Jet Car Stunts ($1.99) by True Axis. The physics are spot-on, the controls are perfect, and the courses are all insanely fun and challenging. So when I heard about Hondune’s Truck Trials 2 ($1.99) in our forums, I pounced. It seemed like the same sort of thing: behind-the-back driving along three dimensional tracks with a focus on precision and speed. After downloading and playing for a while, I can safely say… it’s not the same. I mean, it’s obvious from the screenshots alone that there aren’t many Stunts or Jets (or Cars, for that matter). But it does have the same basic premise of navigating treacherous terrain as quickly as possible, and it’s pretty fun to boot.

In a lot of ways the game is a closer kin to a more traditional Trials-y sort of thing, since most of the time you have to be slow and methodical to get over certain humps and bumps on the course. The major thing that sets it apart from those games, though, is the addition of another dimension (the third one, to be exact). And, like JCS, this freedom of space changes everything. Not only do you have to worry about elevation, you also have to deal with various twists and turns that threaten to drop you off the track with every misplaced wheel. 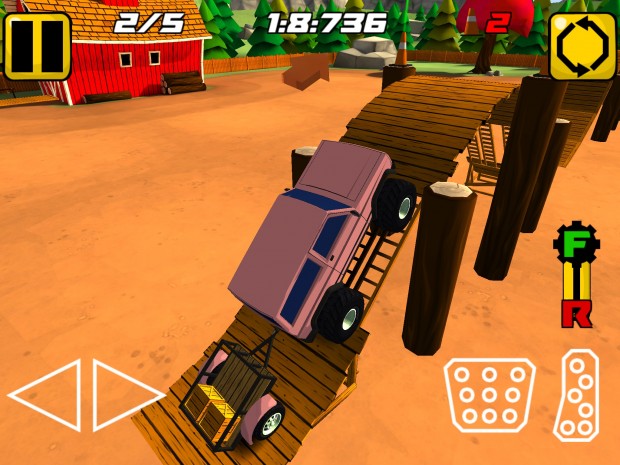 I’m going to make one more seemingly random comparison, and then I promise I’ll stop. The third thing this game reminds me of is those weird parking simulators that are all over the App Store. (I kind of see the appeal of those. Kind of.) Like the games in that genre, you have to be very aware of your surroundings at all times so you don’t get stuck somewhere or fall over an edge. Unfortunately, unlike those games Truck Trials 2 doesn’t have very many camera angle options. You have an “outside” view that you can rotate around, or a “first person” view that’s fun but not terribly practical. It’s not a huge deal, but I wish you were able to zoom out a bit more at least, since I often found myself in situations where my truck was blocking my view of upcoming hazards.

The controls work pretty well, too, but again I wish there were more customization options. As it is now, you’ve got directional arrows on the left and throttle controls on the right. That’s all you get, and you’re going to like it. Optional tilt controls would be nice, and at the very least the ability to move the buttons around to your liking would be pretty welcome. What’s here is fine, though, and gets the job done reasonably well. 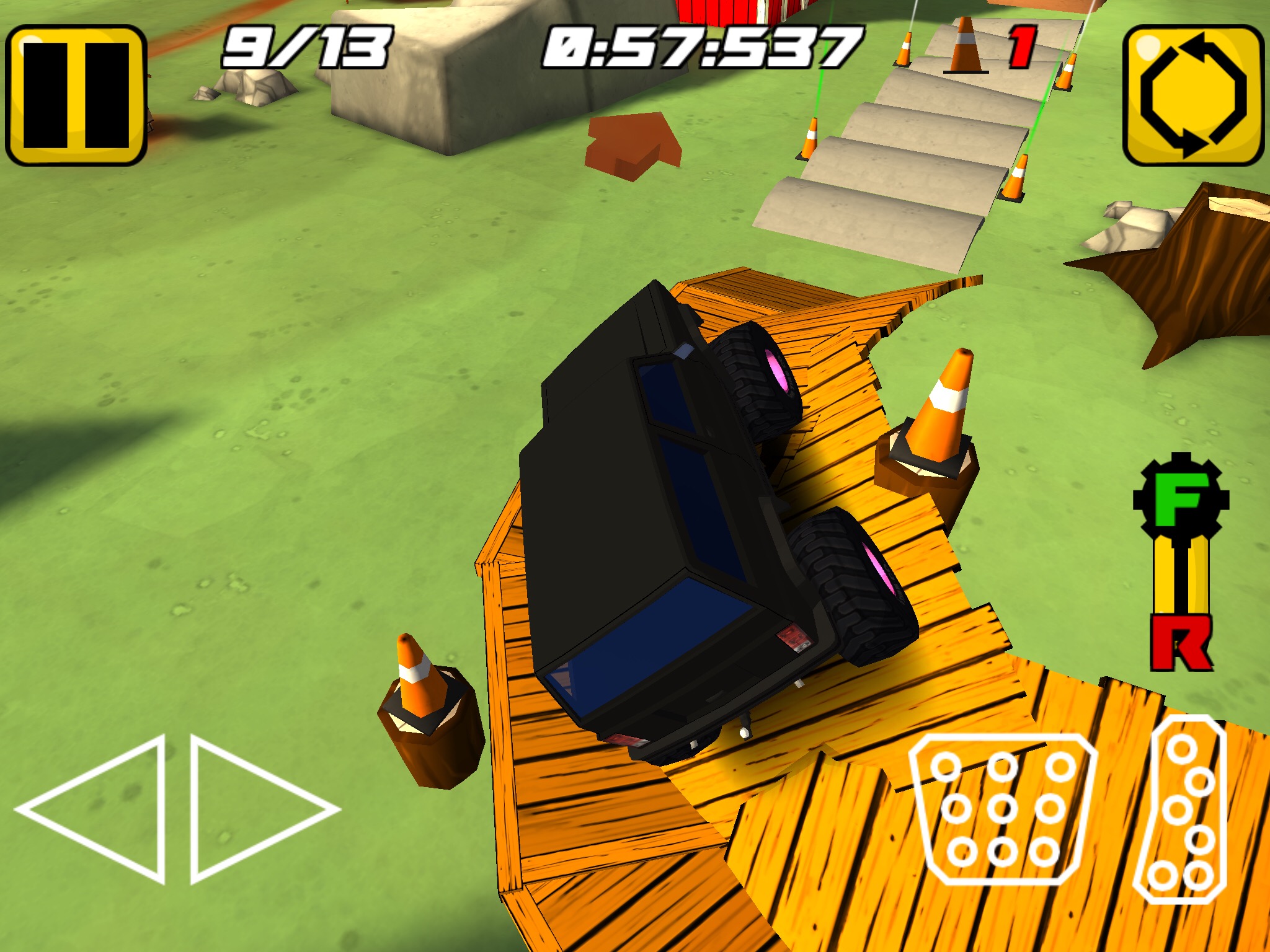 Graphically, everything in the game is bright and bouncy like a cartoon. It looks great, and pairs nicely with the excellent physics engine, which is also pretty bouncy. The game manages to strike a neat balance between realism and arcadey fun that I found pretty alluring. Even when I was frustrated by not having the proper upgrades to pass a level, I still wanted to come back and try over and over because of how fun and cheery it is to just drive around.

Speaking of upgrades, I suppose it’s time we discuss the pay model now. The game is four bucks and includes IAPs to earn money quicker. You can earn enough in-game for whatever vehicles and upgrades you want, of course, but it does seem a little on the slow side as some of the later upgrades are pretty pricey. I made the mistake early on of saving up and buying the most expensive tires for my truck, and was surprised when my vehicle no longer worked. It turns out there wasn’t enough room in the wheel well for them to spin, so I then had to save up for a higher suspension. Weirdly, if I had wanted to go back to my old tires, the game would have charged me again for them. Essentially, any time you want to try out a different set of upgrades, you’ll have to buy them (even if you already bought them once). It’s an odd choice, especially considering the fact that some tracks require a bit of experimentation to get the right build in order to pass them. Thankfully, this will be addressed in the game’s first update, but as of right now it’s a bit off-putting.

Weird pricing issues aside, Truck Trials 2 is still an undeniably fun game. Too slow to be a racing game and too arcadey to be some kind of sim, it hits a sweet spot right in the middle that made it hard for me to put down. It has a few problems here and there, but the wonderful physics and over 50 unique courses more than makes up for any shortcomings in my view. I realize not every game is gonna be my next Jet Car Stunts, but Hondune’s neat little hill climber still hits one or two of the same buttons in my heart.