Her Story ($3.99) is one of the more unique games I have played in recent memory, by far. At its core, you’re just browsing a search engine, trying to find the right queries for what you’re looking for, but that’s pretty much irrelevant. Her Story is a mystery, where you have a mystery involving dozens of segments of police interviews with a woman, where you’re trying to piece together the mystery at hand. The game is about putting together the disparate pieces, paying attention to clues to discover the truth of what happened with the woman and her missing husband.

The story is the star here, and I’m going to be as vague as possible here so that you can discover its secrets and surprises for yourself. Try to avoid spoilers of any sort, because it’s so much more rewarding to discover the truth than to just read it, and to have those sudden realizations happen to you when you do. 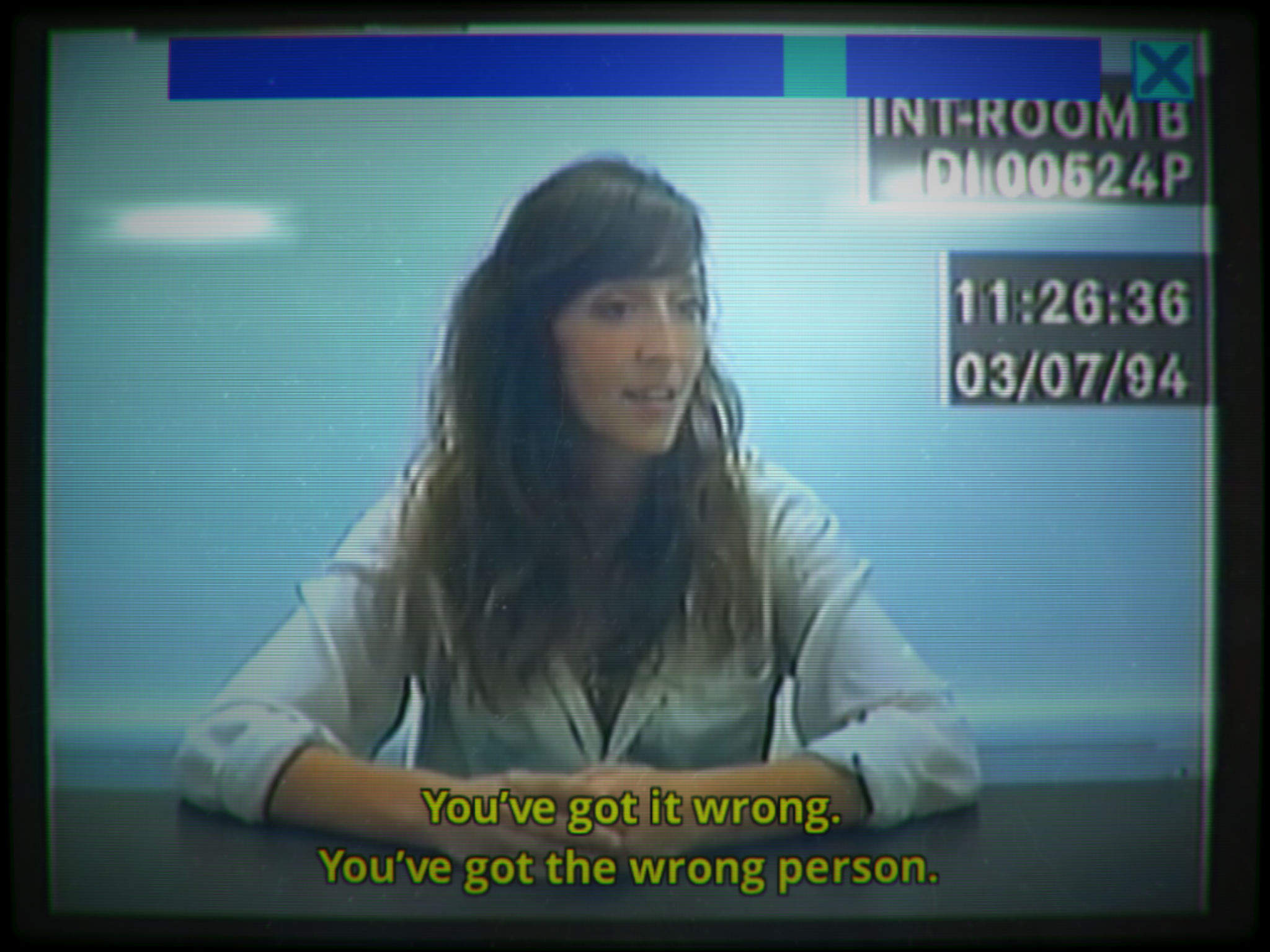 You interact with Her Story by sitting at a simulated computer terminal with a collection of the videos from two years ago. These are composed of seven different interviews, but chopped up into a bunch of different short videos. The in-game justification for this is that the videos were digitized a while back, were split up as part of a database, and thanks to a flood, you only have the woman’s footage, not the detective’s questioning. And then Y2K messed up some stuff, and this is all that’s been recovered. You can search to pull up videos with words matching from what the woman has said, and have those videos pop up. But here’s the thing: in a technical justification for making sure that you can’t search for “the" and watch all the videos at once, only the first 5 videos matching the search query will pop up. As such, if you want to find a later video in the investigation, you need to find the words to match those and not earlier videos. It’s kind of silly, but I understand the justification. Videos have an indicator showing if they’re new, you can tag them with your own tags for easy searching, add them to a list access without searching, and see a database of all the videos you’ve found. This only shows you where the current video is in terms of time with the rest of videos, so you can see if you’ve watched everything, or if there’s videos before or after your current video.

But yeah, the main thing you’re doing in Her Story is watching videos, and rewatching them for new clues. Some things that didn’t make sense out of context suddenly do when you watch another video. You can rewind through videos, and thanks to the big, bold captions enabled by default, rewatching can be easier if you just want to scrub through the footage. Though I don’t recommend that until you’re well familiar with the videos – little things you see with how the woman acts can say a lot. 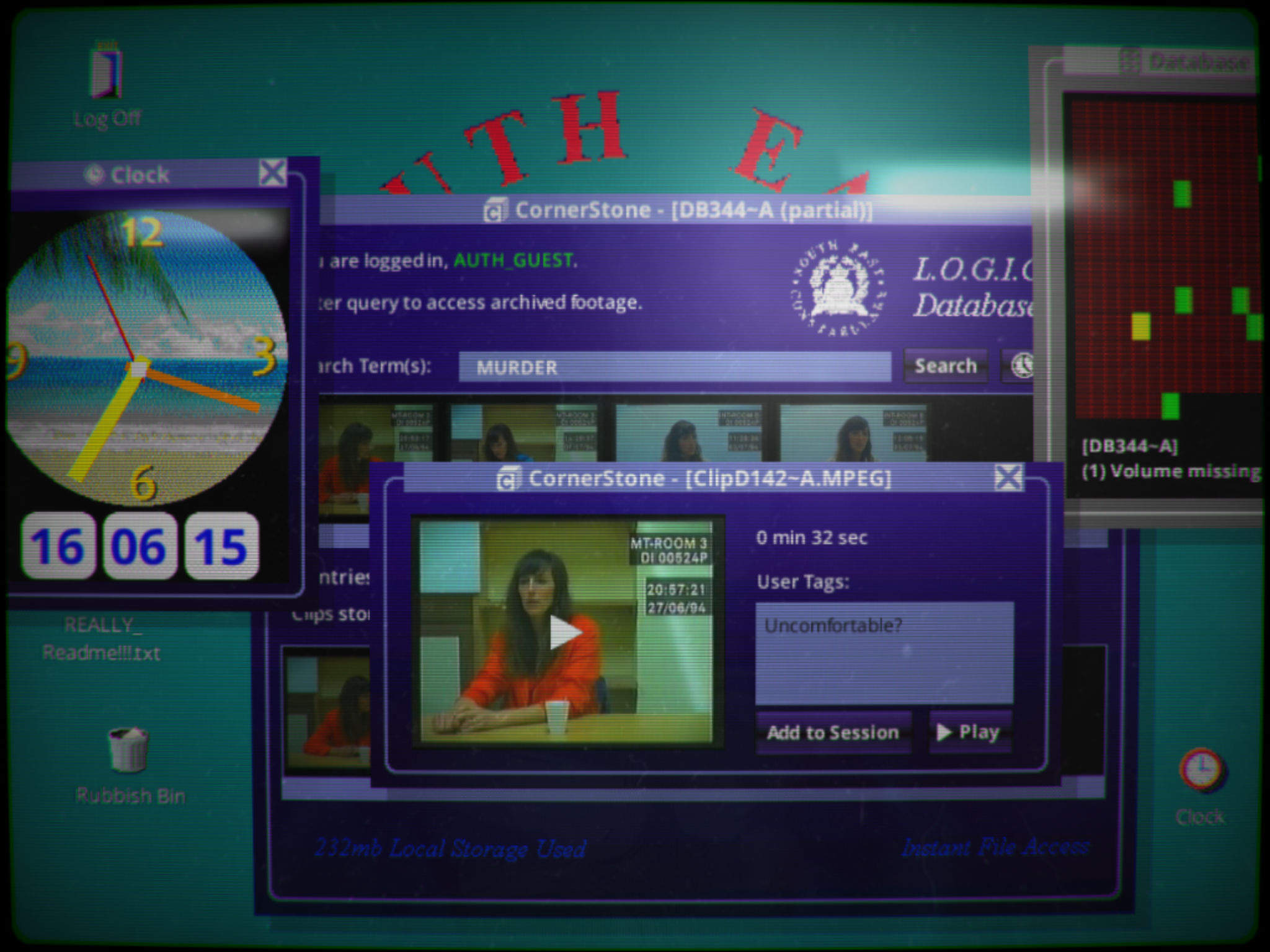 Viva Seifert is the star of Her Story, and her acting has to carry the entire story. She does a fantastic job, one you’ll appreciate the more you play. There’s little things that you’ll start to piece together thanks to her performance that might slip past you on the first viewing. The script does play a few things rather on the nose, but that’s not terrible, necessarily. The game is helped by its guiding moments, the ones that provide grounding that you are progressing, that it provides a definite pointer for where you need to be going. Even one quasi-secret has a significance that seems pretty obvious over time, but hey – not all themes need to be complex and mysterious. You have enough complex mystery to sort out here by yourself.

Her Story does raise some questions about “is it a game or is it not?" I think that this is, but in an interesting way. It’s the kind of thing where you could probably just watch all the videos in linear order and get a sense of the story. Instead, the reward for success is so much more abstract. You’re putting together a jigsaw puzzle, and depending on the path you take, the challenge of putting it together varies. It’s about the discovery, of finding out what’s going on, piecing together that truth. The challenge comes from watching the videos, trying to find the little hints and clues to piece together the videos, to find the important details that will make the truth known. Your reward is revelation, not a high score. There is in-game feedback – little cues will tell you whenever something is important, that you’ve watched something important. But the “game" of Her Story is a vehicle for experiencing the story, and that’s not a bad thing at all! It’s compelling, and the interaction model is interesting enough. 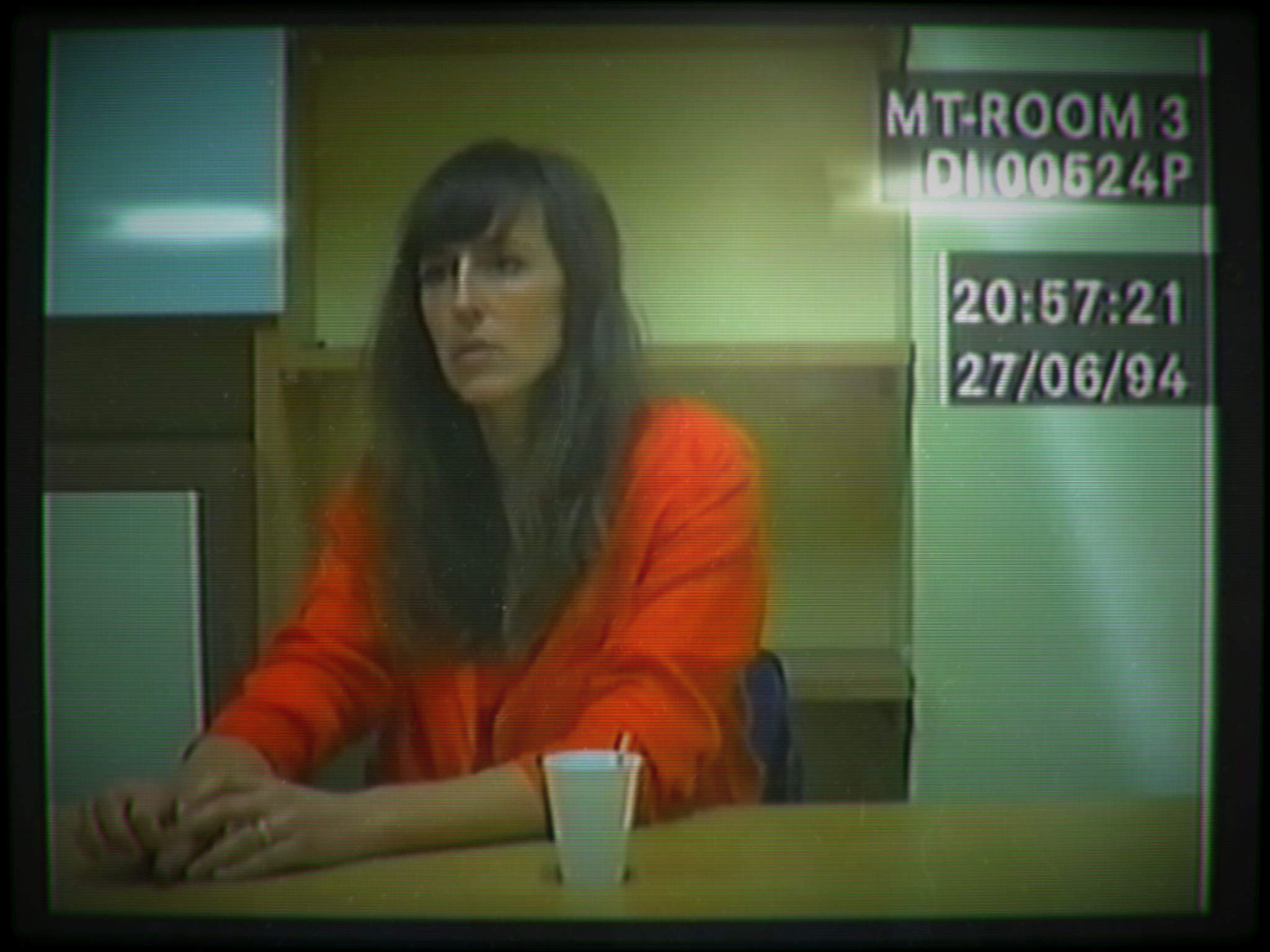 The atmosphere of the game is astounding, too. I think this game is best on iPad, because all the video is 4:3, so you can watch it with no black bars. There’s a CRT monitor effect that curves the visuals, which can be disabled if you prefer, but I think the game loses something without it. Sam Barlow, the developer who also worked on the cult hit Silent Hill: Shattered Memories, has done a great job at making you feel like you’re actually at a computer terminal. When you type on the keyboard, they sound like mechanical key presses. The iOS interface does take a bit away from the look, and it’s annoying that you have to replace the “BLANK" tag for any videos each time, but otherwise the style of the game is cohesive. The music cues can become a bit blatant over time, but that’s Her Story‘s only real weakness: its necessary blatantness stands out when the rest of the game is about watching for little cues, trying to piece together subtle moments.

I highly recommend Her Story, even for its slight imperfections. It can be frustrating to search for term after term, trying to find just the one video you need, or from a particular investigation. Sometimes you just need to search for everything possible to find what you need. And it does have its blatant moments that stand out as being there because they needed to be there to guide you. Plus, the game is a real storage and battery hog, the latter not being a surprise because it’s full of video footage. Regardless, Her Story is so unique and so clever, with genuine “a-ha!" moments that I can’t wait to discuss with others who have played this game. If you like original, premium experiences that focus on storytelling, then check out Her Story.

Turns out the FMV game genre just needed some good acting and writing to be of worth, huh?