I often find myself wondering if humanity is heading for a future like the one portrayed in Mike Judge’s Idiocracy. The gist of the film, for those who haven’t sent it, is that smart people don’t “breed" as often as stupid people, which will therefore create a future society populated entirely by idiots. Everything from the food they eat to the shows they watch on TV are as unsophisticated as possible, and–even though the film is a comedy–I must admit it sends a small chill down my spine whenever I see something particularly low brow take off in our current popular culture. Could this be the beginning of the end? I think to myself. 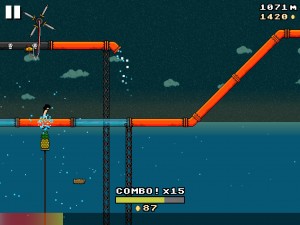 8-Bit Waterside (Free) by Ancient Games reminded me of this hypothetical (and thankfully unlikely) future. That’s not to say the game is bad; it just seems like something the characters in the film might watch on TV. Consider the premise: You control “Tipler", a strange cross between a man and a rectangle. You need to send him down (and sometimes up) a waterside of death as long as you can, all while gleefully torturing him within an inch of his pixely life. This includes kicking him in the balls (“Nut shot!”), stuffing a giant pineapple up his butt (“Take it like a man!”), and pouring acid onto his head (“Chemical peel!”), among other things. Keep in mind that these aren’t the things that end your run–these are your goals. Doesn’t that sound like it could be a reality show in the universe of Idiocracy? Heck, it’s not even that far off from ABC’s Wipeout. 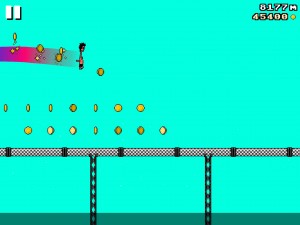 The controls couldn’t be simpler. You tap the right side of the screen to jump and the left side to duck. It works well enough, and there’s even a bit of strategy in timing your ducks to slam through parts of the track to access other areas. There does seem to be a slight delay registering the taps, particularly with ducks and slams, but that could be the game waiting for the character animation. It’s not too bad, but it does cause problems whenever I forget to compensate for it. (It’s worth noting that several people in our forums have praised the controls for how responsive they are, so it’s entirely possible I’m crazy.)

You also collect coins as you go, which can then be spent in a shop that consists of exactly five things: a coin doubler, a magnet, a fart-based double jump (of course), a revive option that gives you three more chances, and a “complete the game” option (which unlocks a new mode that I won’t spoil). All of these are permanent, one time upgrades. It should be noted that there aren’t any IAP’s in the game, and coins come relatively easily. In fact, I’ve only been playing for a few days and already have everything unlocked. 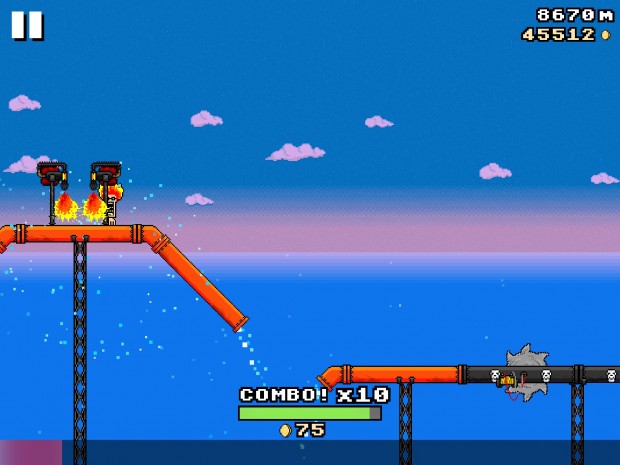 That’s not to say there’s nothing left to do, however, as the point of the game isn’t really unlocking things anyway. It’s about flying down a gnarly waterslide, maaan, and getting as high a score as possible. This is primarily accomplished through the game’s combo system, which increases your points (and coins) multiplier every time you get close to something deadly. On top of that, if you torture your guy enough you’ll also have the option of triggering a SUPER MEGA HYPER BOOST PIPE!!, which temporarily fills the screen with coins and lets you fly through the air, Jetpack Joyride (Free) style. None of the score systems are particularly deep, but they don’t really need to be–it’s just simple fun.

That’s a good way to sum up 8-Bit Waterslide as a whole, actually. Like a real waterslide, it’s cheap, kinda shallow, and won’t last forever. But it’s an undeniably good time while it does last. Not everyone will click with the “hee-hee-don’t-drop-the-soap” style humor (I myself am a bigger fan of co-developer Nicoll Hunt’s hilariously absurd Fist of Awesome (Free)), but those that do will get more than their money’s worth for two bucks. And in regard to the film Idiocracy, science suggests that particular dys-dope-ian future probably won’t happen anyway, so we can all enjoy dumb (but fun) games like this more or less guilt-free.