First you’re a hit mobile game, then a while after your craze peaks, you become an animated movie. That seems to be circumstance with Cut the Rope, as ZeptoLab is working with Blockade Entertainment to make Om Nom. Blockade has ties to several other video game movies, inluding the upcoming Ratchet and Clank and Sly Cooper movies, and the 2014 Heavenly Sword movie. Yes, they made a movie based off of a 2007 PS3 game that never saw a sequel. Not sure why, but hey, we all have our bag. Om Nom is set to release in late 2016, and here’s the teaser poster: 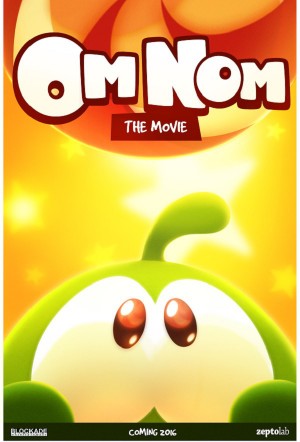 Expect this one to be aimed at kids, what with the synopsis saying “Along the way, Evan and Om Nom will discover the importance of trust and patience, and how life’s accidents can sometimes lead to incredible discoveries and unforgettable moments." Those of you wanting a dark, gritty adaptation of the Cut the Rope story will be sorely disappointed. I’m sorry. But hey, Om Nom is an adorable character, and who knows, maybe this will wind up being entertaining. They’ve already tried making cartoons with Om Nom before, too: