It’s an oft-heard complaint that simulation game developer Kairosoft spins their wheels a little too much. I’ve made that complaint myself a few times while reviewing their games. They have a few templates they like to work with. Typically, they select one of those templates, apply a new theme to it, and maybe add one or two small refinements. The result is usually pretty fun, don’t get me wrong, but does tend to feel like you’re playing the same game again, except this time with a fake mustache. That said, they’ve been slowing down their releases on iOS a bit of late, putting out more unusual or at least less well-worn fare like Kairobotica ($4.99) and Magazine Mogul ($1.99). I find myself actually looking forward to their releases again, something that hasn’t happened for a while. Their latest release, Biz Builder Delux ($5.99), is in many ways their best one yet.

Of all the templates this developer likes to use, I think the business simulation one is the most frequently seen. They’ve done a sushi shop sim, a hot spring sim, a clothing store sim, and that’s not even getting into the games they haven’t released on iOS in English. They’ve also made quite a number of city building sims. Biz Builder Delux goes bigger, combining most of the good ideas from all of those games into one. It starts off in a simple and easy to understand fashion, having you set up and manage a shop. You’ll have to place furnishings, hire staff, research new products, and all the other usual things. Things take an interesting turn when you bump off your first rival. You’ll get the opportunity to open a second store, and it doesn’t even have to be slightly related to your current business. After a while, you’ll open another store, and another, and soon you’ll have a whole little empire of shops, each with their own particular layouts, specific product types, and employees. 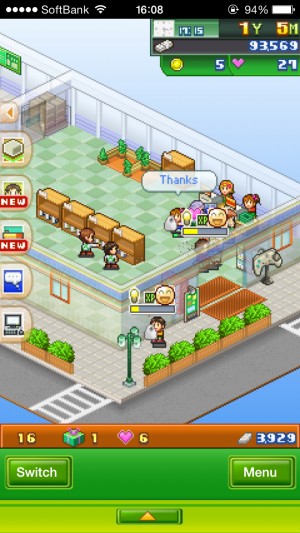 What’s cool about this is that each shop offers just about as much depth as we typically get from a full Kairosoft sim. Once you have a few going, you’ll have to juggle a lot of information and a number of unique tasks, lending the game a much more hectic feel than the usual sim from this developer. It reminds me of juggling restaurants in Cafeteria Nipponica ($4.99), but with the difference between shops more clearly defined. Having multiple shops also helps keep the economy in check, something that some Kairosoft games have problems balancing. Each location could always use something, and with so many to share the wealth around to, you’ll always find ways to spend your money. I also like how even though many objects are shared, each type of business has a number of exclusive furnishings to work with. If this were everything Biz Builder Delux had to offer, I’d still be recommending it over most of Kairosoft’s line-up, but there’s more.

Each of these businesses is located somewhere in your town, of course. You get to choose the spot in a view that looks like one of the developer’s city building sims. As you play, you’ll work with the mayor to grow the town. Certain spots on the map can be explored for treasure by sending out some of your employees, which makes no sense at all but at least gives the chance for some “away mission" fun. Successful hunts will yield materials for new research or training employees, along with other valuable goods. These are important to make time for now and then, because there are plenty of resources in this game that you’ll need to keep well-stocked in order to get things done. New in this game are special gold coins that can be used to hire better employees, refill your staff’s stamina during the day, or buy the rights to new types of businesses. They feel like they’d be IAP, but they’re not. You just earn them by exploring, winning contests, and completing goals.

As usual, the goal is to create as successful a business as possible in a certain period of time, but you can continue playing after that point if you’re still enjoying yourself. It’s also pretty much impossible to lose, as in most of the other games from this developer. You’ll almost always be moving forward and upward, but there’s so much to take care of any given point, having an assured victory doesn’t hurt the game’s enjoyment much. There’s an awful lot to see and do, and maxing everything out will keep you busy for quite some time. I think this is a good direction for this developer to go in. They have their audience, and I’d guess a large part of that crowd likes the progression system the games have going on. Giving players more to chew on rather than laser-focusing on one thing and making it more complicated or difficult is a good way to please players of a variety of levels. 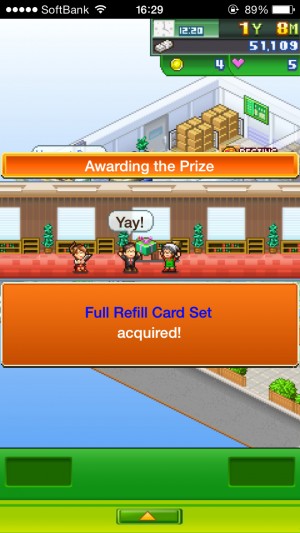 I also want to mention the improved user interface for the game, which finally feels like it’s designed more for smartphones than feature phones and/or PCs. Placing objects is a lot less fussy than in other games from this developer, and the menu buttons are a bit bigger, too. In terms of the visuals and sound, it’s the same old fare, but I’m not sure how I’d deal with Kairosoft ditching their house style at this point anyway. They’ve reused these sprites so often that I’ve gone right past being bored of them and looped right back into appreciating them, like a broken-in pair of slippers or something. Some new animations once in a while might be nice, but it’s not as though the game isn’t being properly conveyed by its graphics. Customers grab things off shelves, carry them to the register, walk out with bags, all while the staff runs over to sweep up or restock the shelves. Exciting? No, but functional.

If you’re completely and utterly tired of what Kairosoft has to offer, I’m not sure Biz Builder Delux will bring you around. Every little part of it works in the usual way we’ve come to expect, after all. The strength of this game is in stitching together all of those parts to form a giant Voltron of cute simulation games. At least for me, that’s enough to make this game worth its while. I’d go so far as to say I think it’s one of Kairosoft’s best, and the variety of themes it incorporates means it probably has the widest appeal, too. The big problem now is that I can’t see myself going back to a single-business sim from this developer after playing this, but I suppose we’ll cross that bridge when we come to it. For now, I think Biz Builder Delux makes for a nice bit of fun for sim fans looking for something they can pay once and fully enjoy in a genre buried in free-to-play giants.