Sometimes a parody can be just as shallow as the very thing it attempts to lampoon. Take Tofu Hunter (Free). It makes every attempt to poke fun at games like Deer Hunter, subbing out living pieces of bean curd for real live woodland creatures. Just like a bad batch of soy milk, it’s a little too bitter.

To its credit, Tofu Hunter starts off with a bang. You’ll be aiming down a reticle in seconds, looking down your sights at limping pieces of tofu, who are bloodied when shot. To aim you’ll simply slide across the screen, and shooting is done by way of tapping a dedicated virtual button on the lower right-hand side. Some guns can zoom if you double-tap outside of the shot space. Easy enough. 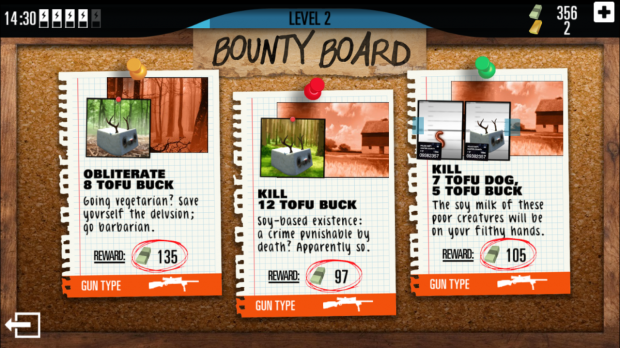 That’s pretty much the gist of it. You’ll follow specific objectives, killing (subduing?) certain enemies, ignoring others lest you trigger a “failure," and completing parameters like timed runs or score goals. The shooting mechanics are fun, and the objectives themselves range from inoffensive to relatively enjoyable. My favorite gametype is one of the target practice missions, which forces you to seek and find targets across multiple screens — it really tests your reflexes.

If there were more environments and maybe even a funny little story it would be worth returning to time and time again, but the sheer lack of variety hurts Tofu Hunter quite a bit. Often times missions would blur together, like I was playing the same string of levels over and over. If only there were more modes to choose from to spice things up a bit. The humor is rather dry, often relying on the same set of morbid jokes. It’s not even offensive — it’s just not very memorable.

Sadly, while you attempt to weed your way through the mixed mission sets, you’ll be greeted by an energy system that isn’t lenient in the slightest. In-game gold can be purchased for real cash, which can refill your energy or buy items. It’s all a waste of money because of how simple the entire affair is, and unfortunately, the ad-watching scheme is just as aggressive. 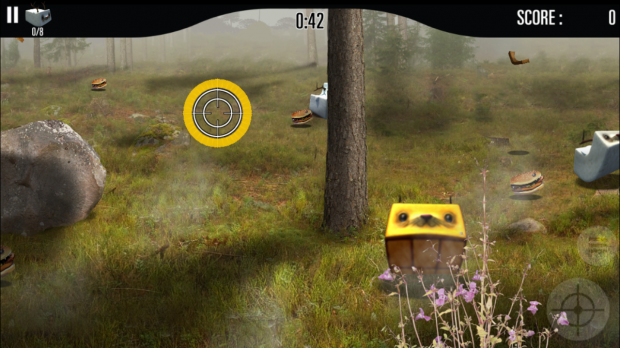 To earn the equivalent of $0.10 worth of gold, you’ll have to watch a 15-30 second video The same thing goes for one unit of energy, which takes roughly 30 seconds per round to blow through. You’ll end up watching more ads than actually playing the game. It would be great if there was a “buyout" option.

There are plenty of shooters to spend your time on, and although Tofu Hunter is a welcome free distraction for an afternoon, I wouldn’t recommend giving it more time than that.