When I previewed Tequila Games‘ Earthcore: Shattered Elements (Free) a bit over a month ago, I talked about how I enjoyed the developers’ attempt at making a CCG that moved in a different design direction than the likes of Magic the Gathering and Hearthstone. I liked how they implemented some different ideas that departed from the commonly-used gameplay strategies and tactics while retaining what makes CCGs such an enjoyable genre. Now that I’ve finally been able to play around with the released version of the game (since it was in soft launch for some time), I’m glad to say that the game meets and exceeds my expectations by providing an intriguing battle system while also offering an abundance of features as well as some of the best, if not the best, multiplayer features I’ve seen in an iOS CCG. Earthcore’s not the perfect game – there are some issues with the menu design and the overall color pallete – but it’s pretty close.

Let’s start at the game’s core, its batle system, and work outwards from there. As the game’s title reveals, Earthcore‘s battles are built around an “element" system where Earth beats Water, Water beats Fire, Fire beats Earth, and all three beat Dust. This is the basic recipe and it applies to all card-to-card battles, making the game very accessible to beginners. Continuing on the notion of gameplay simplicity, the developers designed the game to be played in three lanes with each card fighting with the card on the opposite lane. Each turn you can play only one of four cards in your hand, and the game ends when you or your opponent lose all your HP. 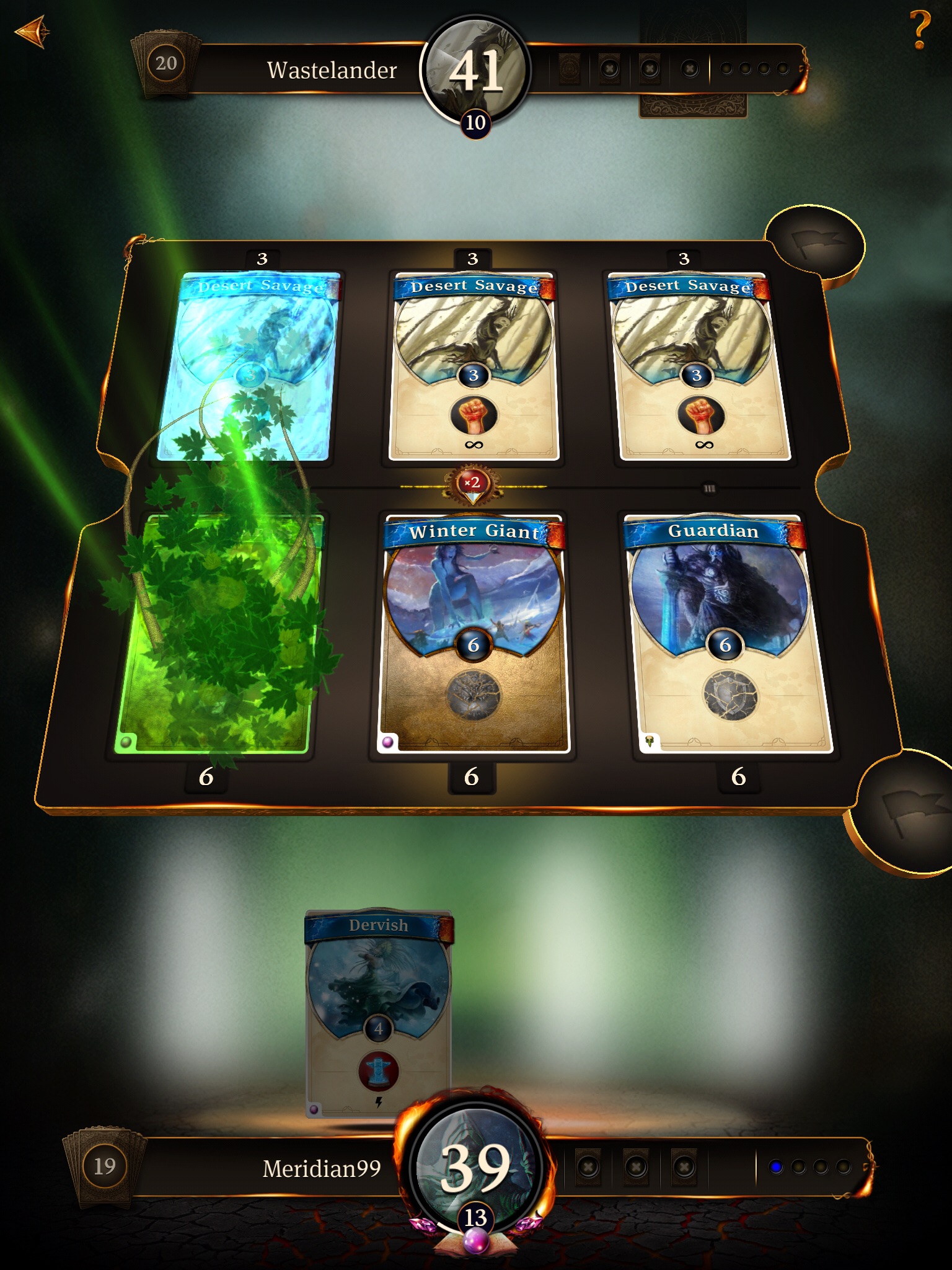 Where Earthcore innovates is in the use of the Risk system, which replaces the Attack/Health system most often found in CCGs. Each card fights once each round, and if it wins its fight with the card across, it returns to your hand, otherwise it’s discarded. You can’t just play a strong card and hope it will remain on the board for as long as possible. As a result of this system, the idea of board control, so central in other CCGs, only makes sense within the context of one round rather than the whole match because when all six cards are played, battles are resolved and the board clears up again (unless the cards are tied, which results in their risk values remaining on the board). Forget about trying throughout the game to build a strong board that will help you win the game in the long run (which is the best advice anyone can give you if you are playing Hearthstone for example); in Earthcore, each card you play and each battle you win matters immensely because if you win, you keep that card and damage the opponent – if you lose, there goes the card and there goes some of your HP. This system places more value on each card and cuts down on throw-away cards. 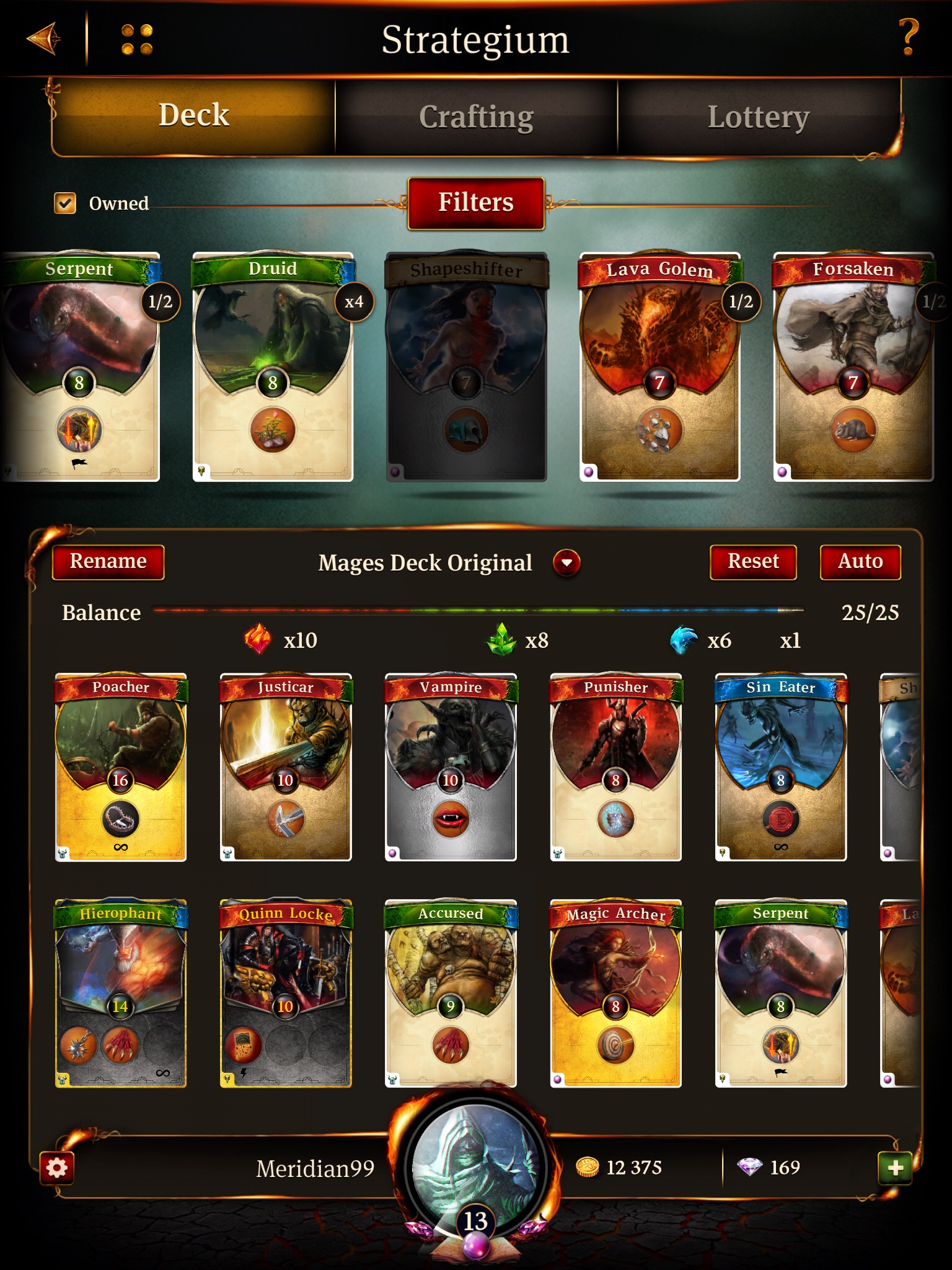 While the Element system decides which card wins, it’s the Risk system that decides the damage inflicted. Each card has a risk value associated with it (the only number on the card by the way), and if that card loses its battle, it inflicts its risk value as damage on its owner. This system completely changes the complexion of the battle and the player’s strategy by making weak cards matter; a weak card might not have any special skills, but its low risk makes it a safer play than a powerful but high-risk card. Fortunately for many, the risk and element systems hinder the dominance of ultra-aggressive decks that so often reign in CCG games like Hearthstone. I know that this will be music to the ears of all those who cringe at the phrase “Face Hunter," the current dominant Aggro Deck in Hearthstone. 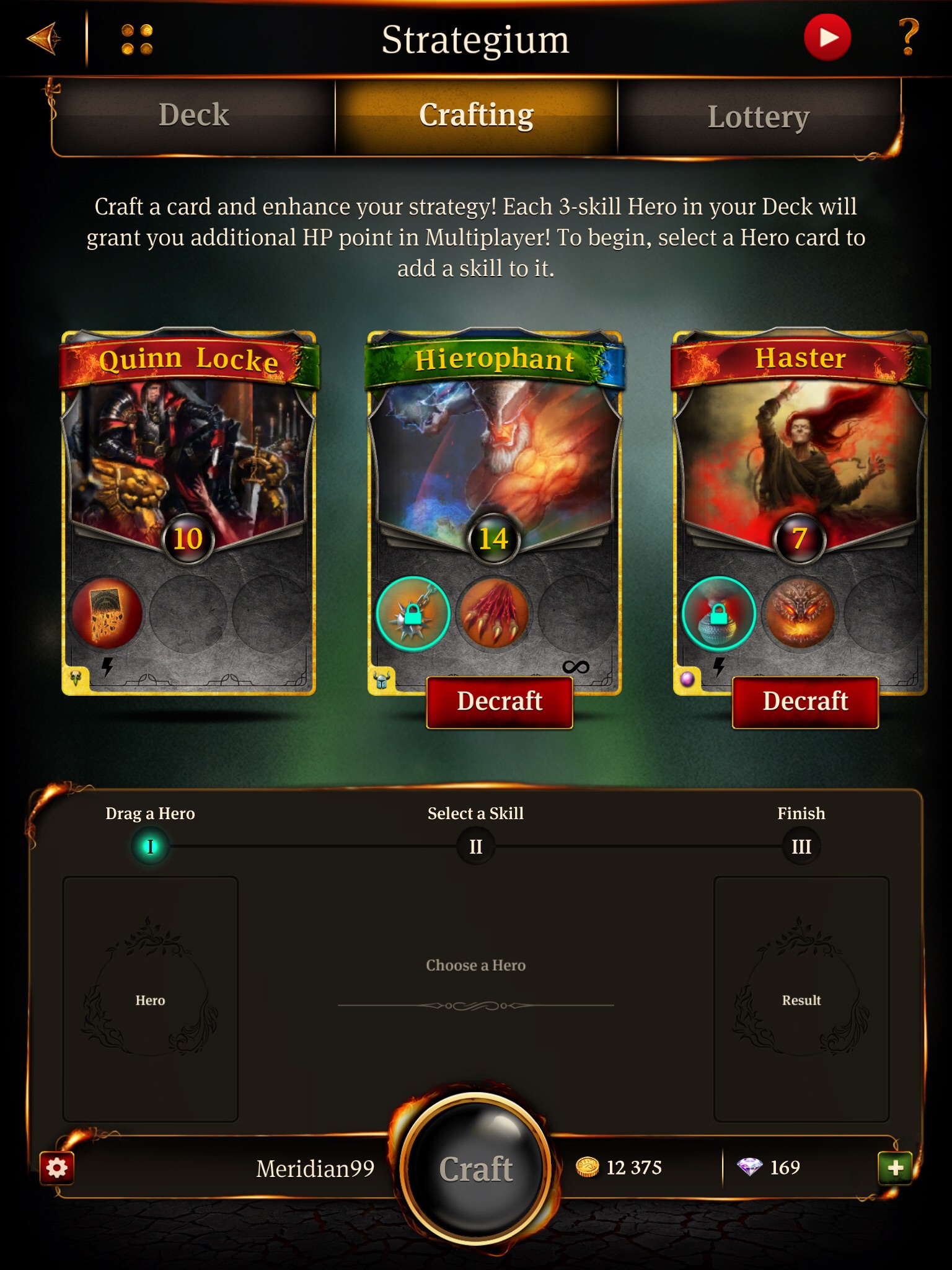 If the Element and Risk systems were the only features of Earthcore’s battle system, the game would probably be too simplistic, and the developers knew that, so they added the Skill system. Many of Earthcore‘s cards have different skills that can do all kinds of simple or crazy actions ranging from dealing damage to the other player to copying other cards’ skills to all kinds of other craziness. Building a deck with skill combos in mind makes the game much more strategic and fun and takes the combo deck archetype, which gives games like Hearthstone some fantastic, but rare, moments of brilliant card-playing, and makes it an every-round occurance. Hero cards have 3-skill slots and you can customize them by adding various skills, which means you can have one Hero that you personalize to your liking and turn into an unstoppable combo machine. 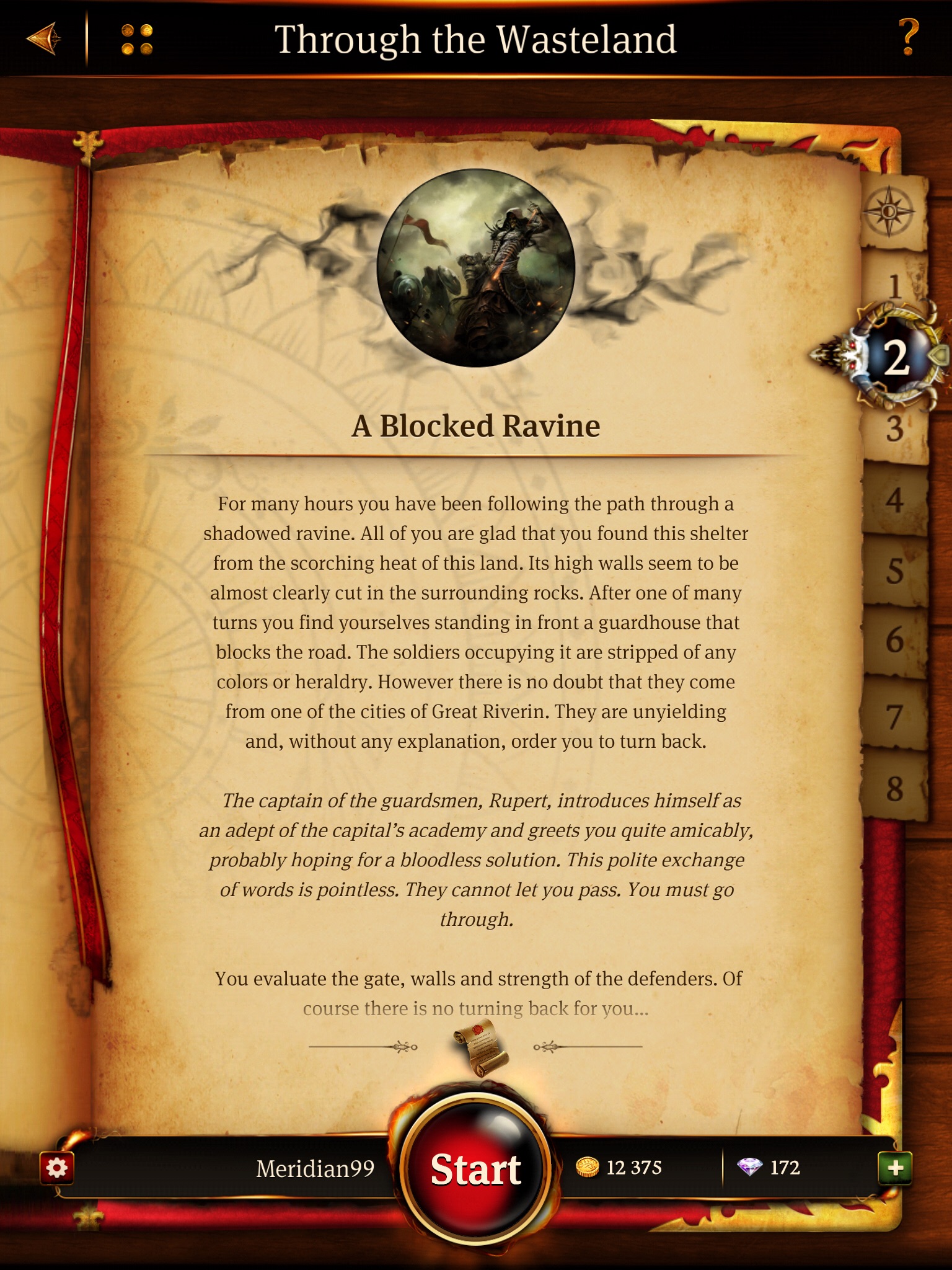 I know I’ve spent many paragraphs on Earthcore’s battle system, but when a developer decides to risk (pun intended) innovation and pulls it off, he or she deserves at least a few paragraphs in a review. Still, this game offers more than just an innovative battle system; it also offers an abundance of features that provide players with plenty to do. First of all, the game offers an extensive and well-written campaign that gives players who dislike PVP a mode that will entertain them and give them plenty of rewards. As for the multiplayer part of the game, I believe it offers more features than probably any other iOS CCG (at least from the popular ones). There’s a Ranked mode with various leagues, which gives you a much better idea of where you stand compared to the competition, a Friendly mode, where you can hone your skills without any impact on your ranking, and a Friend system, which allows friend-to-friend slaughter. There’s also a protegee system where if a player joins the game after your invitation, you get gems and rewards as he or she levels up. Add to all these plenty of Quests, Everyplay Replays, and some upcoming features, like Special Missions, and you’ll realize how feature-packed this game is. And the game is also Universal, which means fun on the move. 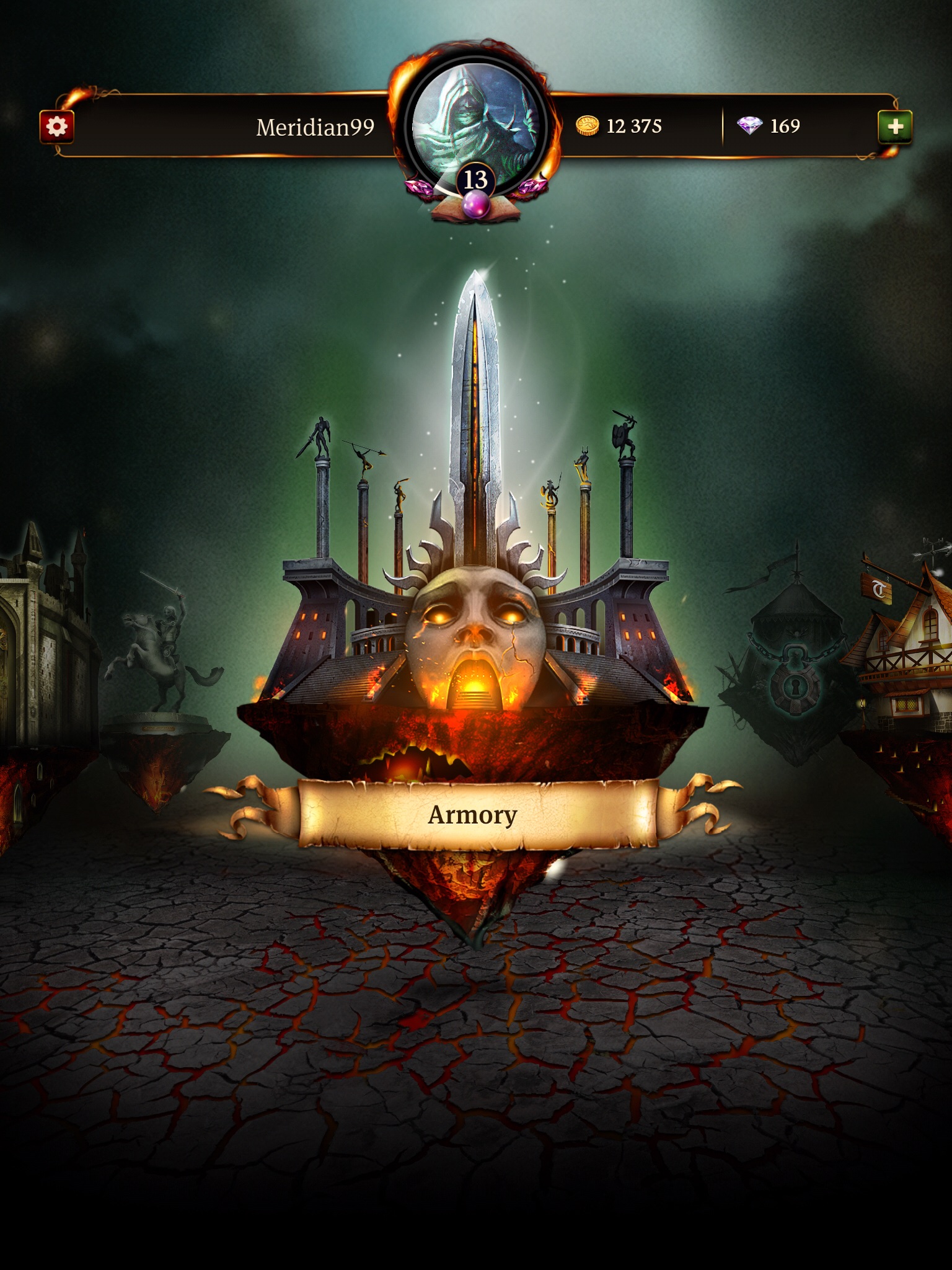 All these features and innovation are, thankfully, wrapped up in probably the highest production values of any CCG out there, and that includes the King of the genre, Hearthstone. The art is spectacular, the sound effects the same, and the animations when you craft cards or attack in battle show an incredible amount of work by Tequila Games’ Art team. My one gripe with the art is that it goes down the path of “fantasy is dark," and as a result the menus are more on the dark side, which does the incredible art a disservice. The music can also get a bit repetitive, and I’ve found that turning the music off allows the great sound effects to provide a better musical accompaniment. The UI is intuitive and responsive, with tapping and dragging working great throughout the game, although there are a couple of missed opportunities where actions that could have required the player to simply drag a skill onto the opponent’s card require instead three taps. There’s also a peculiar “doubling" of the menu buttons (you can access them both in a carousel form and as icons) which didn’t make much sense to me design-wise, especially since the carousel menu makes navigating the game slow even on my iPad Air. 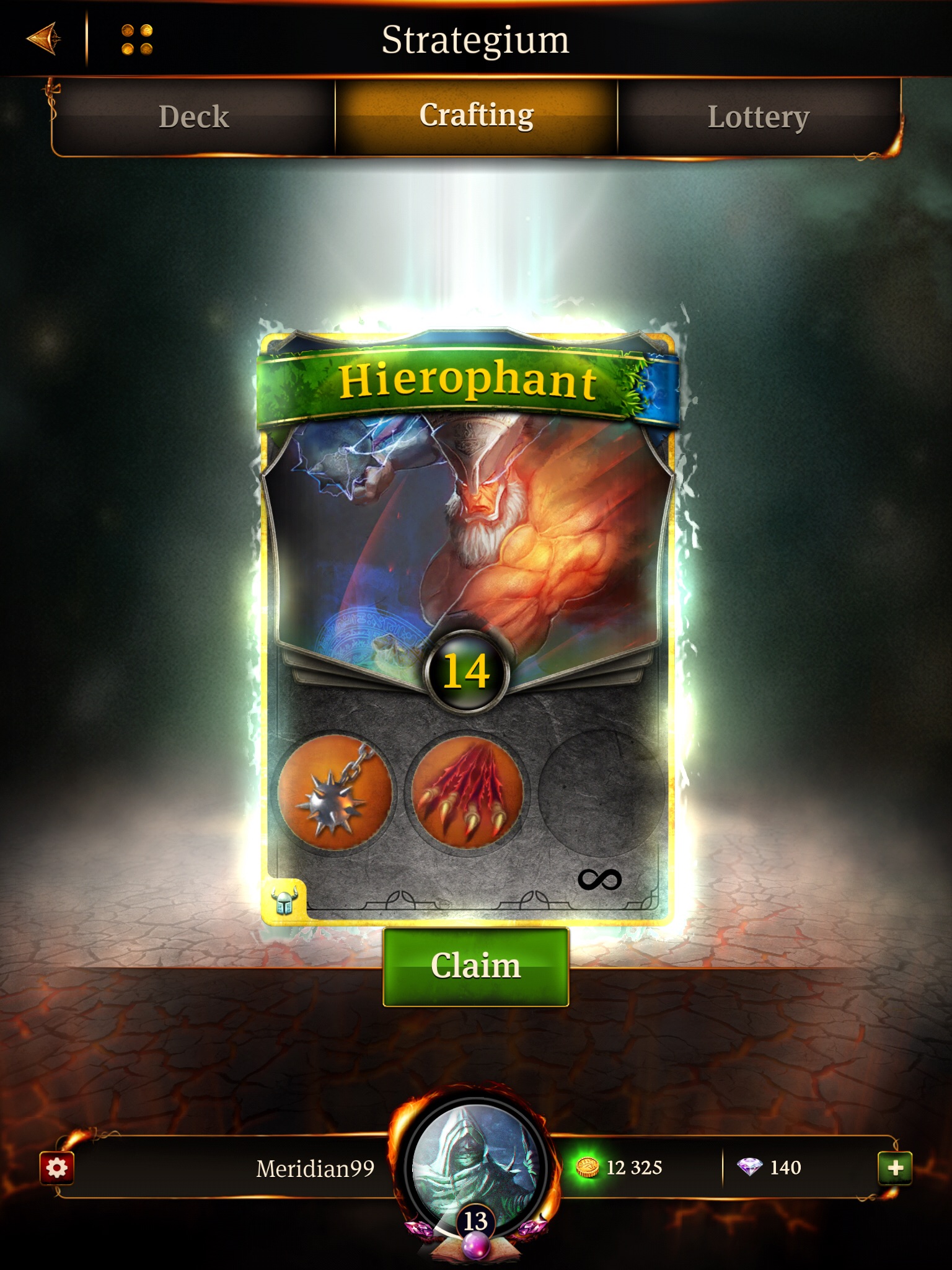 As I wrote in my preview, the game is F2P, which is a monetization decision that fits the game’s genre fine as it enables players to gain currency, gems, and cards, by playing the game. F2P this game might be, but don’t expect any energy shenanigans here; nothing will stop you from enjoying Earthcore. The only time when you’ll have to wait a bit is when you are crafting a new hero, but you can continue playing with your deck until that hero is ready to enter the fray. The game is quite generous with its rewards, and the campaign offers plenty of opportunities to build a good deck. Overall, in my time with the game I didn’t feel like I was starving for gold or gems. Hard to tell if a F2P user will be able to compete at the highest leagues (my guess is probably not), but that’s the nature of the beast when it comes to card games; money is often required to build the strongest decks.

As you can tell, I am quite enjoying Earthcore for its innovative approach, which offers a different kind of CCG that can easily co-exist with – rather than replace – the likes of Hearthstone and Magic, the great production values, and the almost overwhelming amount of content and features. Even though it’s not a perfect game, especially in some of the UI choices and the game’s dark palette, this is a game I recommend without hesitation to any CCG player or any player who enjoys beautiful and clever games.