Out of all the random cool occupations that people love to pit against each other in hypothetical fights, Vikings are my personal favorite. I like them more than pirates, ninjas, cyborgs, wizards, samurai, zombies, astronauts, and indeed, cavemen. The proclivity of mobile game designers to use Vikings in cute, chibi, horned helmet form despite their historical violence and lack of horned helmets is A-OK in my book. Which brings us to Viking Remix Madness(Free).

The debut App Store game of Ferver Studios, Viking Remix Madness is an endless, high score music and rhythm game in which you row along with your crew in a jammin’ voyage of zany bearded awesome. Did I also mention I freaking love music games? Because I do. This is a very nontraditional music game; Abstract with no note tracks or anything of the sort. Instead you have to row with 2 of your Viking brethren, responding to specific audio cues whenever you need to do something other than keep the beat. 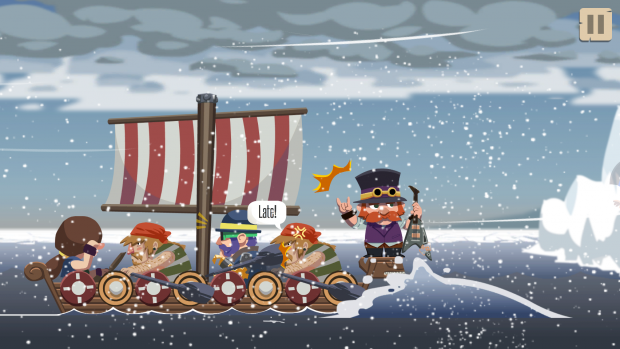 The game is a bit hard to get into. It takes a bit to get used to the timing of everything. Once you’ve established a consistent ‘hey, ho’ rhythm, you’ll be prompted by specific sounds to do triple taps spanning one offbeat, and swipes to get over big waves. Your crew consists of three row men, one steersman, and a captain rocking out on the ship’s bow. If you miss one row, you lose the bowman, another and you lose the steer-man, before a third missed row summons a huge wave to shatter your ship. Once you get used to everything, it’s really just an endurance test as you tap, tap, tap away for minutes on end.

You do also get visual cues. Each swipe wave is preceded by raised glowing yellow oars, and if you manage to keep the captain on the bow alive, he makes a motion with his hand to help signal the triple taps. General pro-tip: Sometimes a triple tap will be timed as such that you do five taps in a row. Watch out for that. As you make progress, you’ll earn an obscure amount of coins. These coins are used to buy one time use coin multipliers, shipmate revives, and fat-lady-singing Valkyrie accompanied head starts. You can also use these coins to fish for random treasure chests, which will contain these boosts, but also different characters to replace those on your crew. I’ll just state right now that you can buy these characters with IAP if you wish, but they are purely cosmetic and not necessary at all. 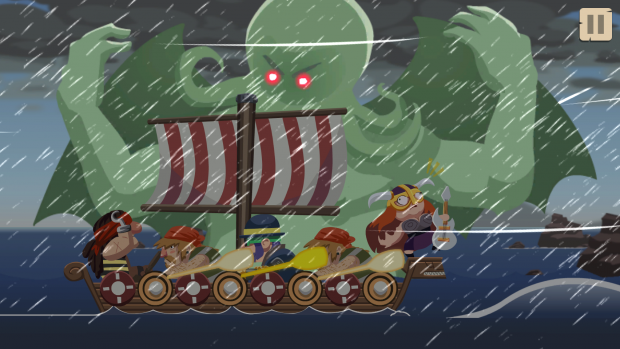 So this is a music and rhythm game and I have yet to talk about the music! too long; didn’t read: it’s awesome. The opening tune is a light and adventurous woodwind piece that will pillage its way into your head in no time. As you progress you’ll enter different areas with different tunes. A snowy area with a chip tune version of the song, a vivid, aurora borealis area with changing colors and electronic music, and most importantly, the stormy area with its metal-tastic take on the melody. Each transition feels great. All songs are the same tempo, and I feel like this is something of a lost opportunity. I very much enjoy the feel and pace of the game as is, but it gets tiresome after a while. Different difficulties with higher or lower tempos, maybe additional directional swipe cues, or even a chaotic mode which changed tempo as you changed areas would add some shelf life to the game.

This isn’t to say that it’s bad. Not at all. And as a first outing for these devs, it’s a creative and enjoyable app which really shows their potential. Someone in our forums compared this game to Planet Quest(Free), and I’d agree. Both are abstract, hard to pin down music games. But I feel like Planet Quest  has a small leg up on ‘Viking’ simply due to its variety. One odd misstep is the lack of a menu when you pause the game. Maybe it’s my highly developed mobile gaming frustration instincts, but if I mess up early in an endless game run, I tend to just restart. There is no way to do that, nor manage any options when pausing. I know it takes all of four seconds to let my ship explode by not playing, but it’s odd to me. Also, un-pausing the game gives you a four second count until start-up, but when the game uses almost no visual cues to keep you on beat, this isn’t very helpful at all. I would love to see a feature in which the music resumes before the game does, allowing you to sync up.

Just spit-balling here, but thinking of Planet Quest  made me think of another possibly cool game mode. In Planet Quest  you can regain hit points with good taps. Maybe a mode in which you’re trying to outrun enemy Vikings, or trolls, or an angry Thor, or C’thulhu where you have to stay ahead could implement such mechanics. I’m not holding any of this against the game at all. These are just random ideas I’m throwing out there, free of charge. I’m reviewing the game as is, and even though it has some blemishes, it’s a really fun game, and totally free to boot.

I forgot to mention the best part. The distractions. Every so often, something will interfere with your screen, like a few chatting sea-gulls, loads of their actual crap, a happy-go lucky Narwhal and more. I mean, ‘madness’ is in the title. I found the most difficult distraction to be the raining cats and dogs, as they make a lot of noise and steal your focus. And even though the trailer and screenshots show an encounter with C’thulhu, I wasn’t able to encounter him in over 9k straight of rowing excellence( #NotSoHumbleBrag).  I don’t know if he’s just incredibly rare or what, but that saddens me. Maybe soon. As a last note, Ferver has set aside a section in the options menu for more ships in the future. I can’t wait to see what these developers do next.