Kids today are all about Minecraft ($6.99). Mining this, mining that. Back when I was a young fellow, we had a different kind of ‘craft: Lovecraft. Okay, if you’re still reading, you’re probably strong enough to handle a bit of Lovecraftian gamebook horror. The problem is that up until recently, most of the horror gamebooks on iOS have been focused on zombies, vampires, or other such classic monsters. Tin Man Games has had a couple of promising-looking titles up for a couple of years now, but they were French books without translations, leaving them out of the reach of most English players. Well, it seems like May 2015 is the month where Tin Man is finishing some old business, because in addition to the recent release of Gamebook Adventures 10 ($5.99), they’ve also finished up an English version of Les Fils d’Uruzime, translated directly as Sons Of Uruzime ($2.99).

In this one, you’re playing as a young professor at Miskatonic University in Arkham. One day, one of your students goes missing, and your search for him will expose you to the stranger side of America’s weirdest fictional city. There’s no dice-rolling in this one, but you will need to pay attention to clues, collect items, and be careful not to run your two main stats dry. Skill points can be spent to take ostensibly advantageous actions at certain points, provided you have any left. Sanity points work as your life meter and are consumed when you come across anything too horrifying or inconceivable. You can run out of skill points and keep going on, albeit with some of the best options closed off to you. Running out of sanity points, on the other hand, is fatal. Every game gives you the same amount of both to start with, so winning the game is partially a matter of learning when and where to sacrifice points. 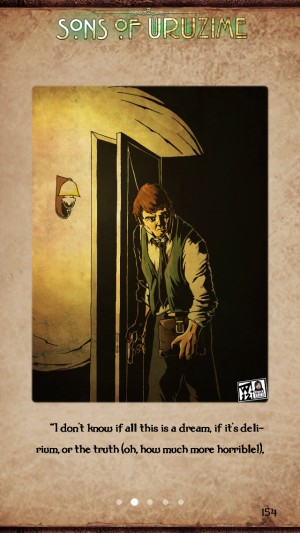 The lack of dice combat makes this a little closer to a straight Choose Your Own Adventure than many of Tin Man’s other gamebooks, but it actually plays quite differently. You do have to mind the frequent opportunities for instant death that the game serves up, but other than that, there’s actually quite a bit more freedom. There are several points where you’re offered a choice of places to examine, and you’ll be able to take them in whatever order you like. Usually, you’ll have the chance to explore every option, but there’s often a price to wasting such time. The path to the best set of endings is rather long and requires a few very specific actions, so you’ll probably have to attempt the game several times to make your way to the end if you’re playing on normal difficulty.

Broadly speaking, Sons Of Uruzime breaks down into three acts. The first section involves your initial investigation, and it is probably the most dangerous section in terms of instant death opportunities. I feel like the game telegraphs things pretty well in that regard, though, so you’ll definitely want to trust your instincts early on. The second section starts after you return home for the night, and it’s easily the most bizarre and wonderful part of the game. Author Romuald Finet really stretches his legs here, dipping into some unexpected sources of inspiration. There aren’t very many items you need to worry about finding here, and although you can get killed in this section, it’s pretty difficult to make that happen. The story winds up in the game’s third section, where you make your final attempt to discover the mystery behind your student’s absence. It’s fairly action-packed and stuffed full of the sort of bizarre occult references you would expect from a game set in Arkham. So long as you’ve done what you needed to in the earlier sections, particularly the first, you should be able to find your way to the end here. Hopefully, you didn’t waste any sanity points unnecessarily. 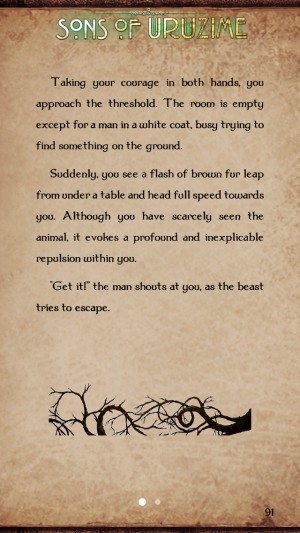 The artwork is provided by Willy Dupont, who plays with bold shadows and soft light sources to make even something as pedestrian as a restaurant server holding a tray look sinister. As usual, whenever you stumble upon a piece of art, it’s added to your collection that you can view at any time from the main menu. You’ll have to purposefully do some counter-productive things to find them all, which lends the game a bit of replay value. There are also a handful of achievements to unlock, a couple of which still elude me after several playthroughs. Of course, both of these elements are common to most of Tin Man’s library, and you can expect much the same when it comes to the game’s overall presentation. You can choose from two difficulty settings in this one, with a free reader mode allowing you to cheat your way through as you need or want to. I should also mention that the English translation reads quite well, something I imagine was rather difficult to pull off in certain sections.

Both from a mechanical point of view and a thematic one, I found this book’s unusual set-up to be pretty intriguing. With an emphasis on collecting information and items to solve puzzles, it feels like a text version of an adventure game as opposed to the typical RPG style of gamebook. I have to state once more how much I enjoyed the middle section of the book. The first and third acts have a lot going for them, but there’s a real familiarity to the whole routine. That part in the middle, though? I don’t know that I’ve played anything quite like it before, and that’s just the sort of thing I’d hope to be saying on the other side of a Lovecraft-inspired gamebook. Sons Of Uruzime is just traditional enough that it likely won’t appeal to those who aren’t already into gamebooks, but if you do enjoy them, this is worth picking up and taking a few cracks at.