Well, I guess I opened a can of worms when I reviewed Hakuoki ($22.99) a while back, because we’ve received numerous reader requests for more visual novel reviews. Let it never be said that TouchArcade does not aim to please, so even though it’s a few months old, I’ve decided to write up the most commonly-requested title, Queen’s Gambit (Free). This one comes from Voltage Entertainment USA, one of the more popular American developers in the genre, and it follows the adventures of an elite spy working for a private organization dedicated to keeping the world safe. Like most visual novels, you can count on a lot of reading, a little bit of decision-making, and a whole lot of romance. 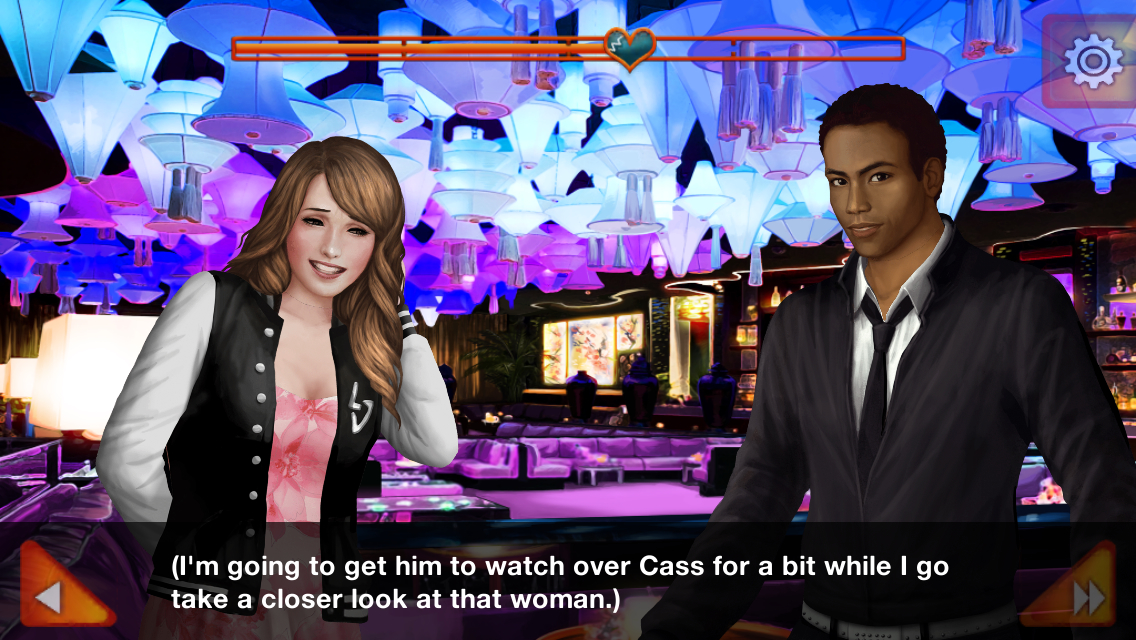 There are four reasonably lengthy storylines to play in the game, each containing four episodes. The first part of each story is free to play, but the remaining three episodes of each plot run for $1.99 each. If you want to buy everything in the game, you’re looking at around $23.91, which isn’t too far off from comparably-sized visual novels. Of course, since the stories aren’t really connected, you can easily just buy one storyline and get a pretty fun romp for a fraction of that price. Each story focuses on a different character who will act as your spy’s love interest for the duration. In total, there are three possible male love interests and one female, with the characters taking on roles including a fellow spy, an ex-lover presumed to be dead, and an assassination target. Depending on your choices as you play, each storyline has multiple endings to discover. As usual for this genre, during special points in the story you’ll get some nice pieces of art that you can collect and view later as you like.

The story is your basic pulp spy novel stuff, the kind of book you’d find at a gas station or convenience store and pick up as a sheer guilty pleasure. Like most of these stories, your main character is nearly flawless at her job. She’s tough as nails, thinks quickly, and manages to survive the most unbelievable death traps, saving friends and family along the way. There’s just one thing spy-bot is not programmed to handle: love. Since this is a visual novel, she’s in a lot of trouble. You have very little control over the course of the narrative, but each section of the game will usually prompt you once or twice to make a choice. The dialogue is slightly different in the moment based on that decision, but the bigger effect comes when you reach the end of the game, where everything you did is tallied towards one of the endings. I didn’t run through every variation of every path, but I did check out a couple of different endings on some of the storylines, and I was actually kind of impressed at how natural they feel. None of the endings I got felt like false ones, which is often the case in games that try this particular trick. 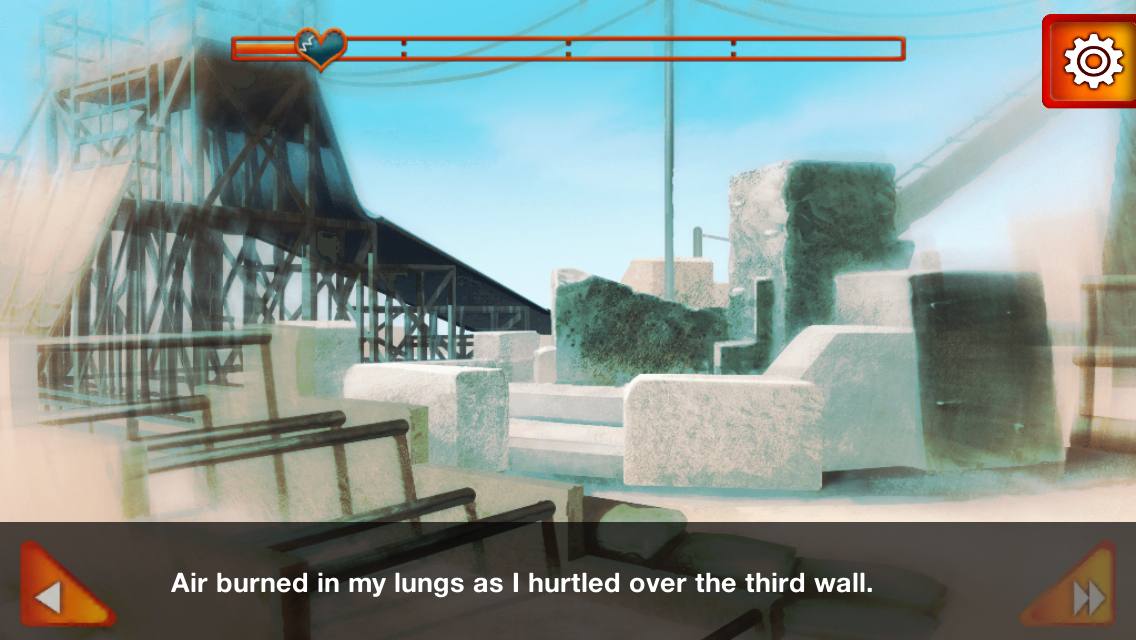 I’ve got a bit of a fondness for this kind of story, so I found Queen’s Gambit to be quite the virtual page-turner. The dialogue flows generally well, and while the plots are extremely contrived if you’re even remotely familiar with the genre, they’re told well enough to keep your interest. It’s interesting to get to know all of the different characters and how they can each affect your heroine. Unrelated to any of the specific romances, I enjoyed the main character’s dynamic with her sister. She’s a lot of fun whenever she shows up in any of the storylines. As for the romance bits, they can get a bit awkward, as you can really feel the writer having to write around certain things to keep things at least somewhat clean. They’re at least less awkward than the kind of thing we see in BioWare’s games, and about a million times smoother than what you’d read in one of Ian Fleming’s Bond books. That man had more passion for Bond’s breakfast than he did for his romances.

There are plenty of still images to illustrate the events, and while you’ll be seeing a lot of the same poses and facial expressions pretty frequently, the characters have a decent range of expression. The art style feels perhaps a little overdone at times, but it’s not bad. Some of the characters look awfully familiar, and I can’t decide whether they’re in there as homage or something else. I was surprised by how much variety there is in the backgrounds, actually. There are some places you’ll visit again and again, like your character’s apartment or the headquarters of your organization, but there are plenty of detailed locations that you’ll only visit once or twice in the course of all the storylines. Sure, they’re just still images, but in a genre that likes to recycle early and often, it’s nice to see so many different places. After all, it wouldn’t be much of a spy story without going to exotic places to kill/smooch people, would it? 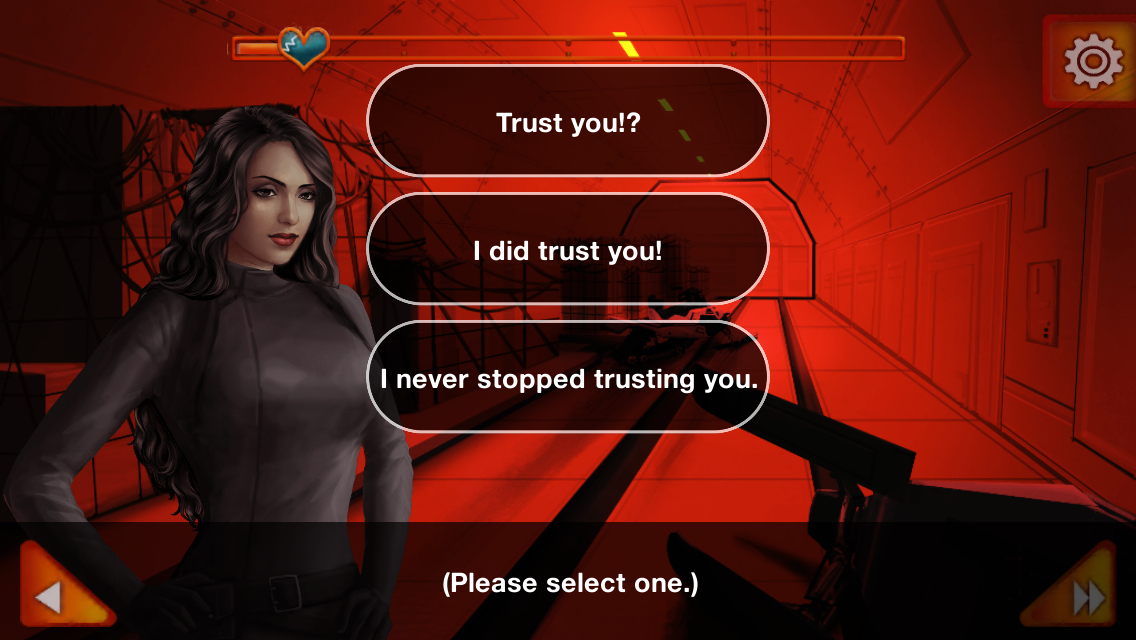 Speaking of smooching and killing, I should probably clarify that this game is for grown-ups. I mean, by movie standards, it’s PG-13 Bond fare at worst, but by game standards, it can get pretty violent and risque at times. Since the last visual novel I played was Hakuoki, I was initially a little shocked by how direct Queen’s Gambit could be, but it’s not really that unusual for this genre to skew more adult. That’s basically the target audience for most of them. It’s just something to keep in mind in case you’re playing this on public transportation or something. Though depending on which type of transportation you’re taking, you might not be able to play the game anyway.

For whatever reason, Queen’s Gambit requires an internet connection to play. It needs to phone home when you start it up, change episodes, or make any choices. If you’re not connected, it simply won’t start. I’m not sure if it’s this network connection that causes the game to load so insufferably slowly, but I wouldn’t be surprised. I’ve sometimes had to wait staring a loading animation for more than a minute while playing this game, and sometimes it comes back with an error, forcing you to start the process over again. There’s really not much excuse for a visual novel of all things to run this badly on relatively new hardware. It’s still pictures and text. I’m also not keen on the save system. If you exit the app and it gets cleared from memory, which can happen very easily due to its inexplicably massive footprint, you can resume where you left off the next time you play. The problem is, it’s not exactly where you left off. Sometimes it’s a little before, sometimes it’s a lot before, but it’s pretty irritating either way. 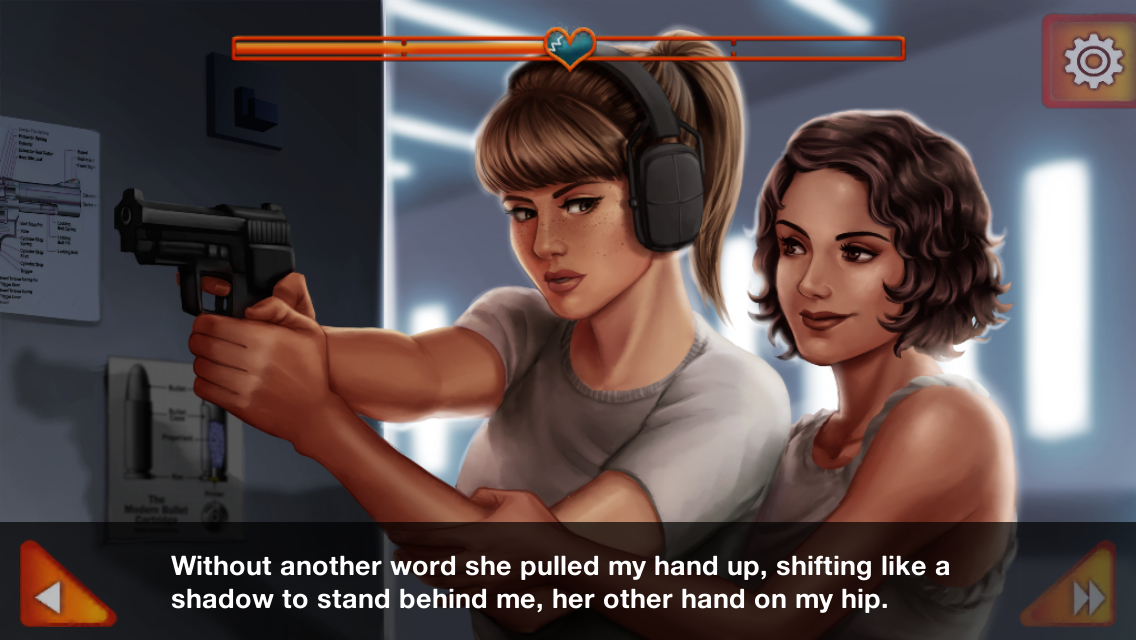 Queen’s Gambit tells a handful of pretty interesting spy stories with an enjoyable cast of characters, and I appreciate its a la carte system where you can basically buy an episode whenever you want it. Of course, since this is a visual novel, you should expect to do a lot of reading and very little playing, but the decisions you do make are pretty important in the long run. I’m also impressed with just how much content there is here relative to other games in the genre, even Voltage Entertainment’s own. Oh, and if you’re only going in for one of the stories to start, I’d recommend Emily’s. It felt the most authentic to me, and it has a lot of emotional ups and downs to it. The game’s admittedly cheesy fun is kind of spoiled by all of the technical issues, but as long as you go in with the patience to deal with them, I think you’ll find the game has a lot of charm. Awkward charm, goofy charm even, but charm nonetheless.