Long a staple of the Japanese games industry, romance games have been slowly gaining a bit of a foothold in the west. It seems to have gone hand in hand with the establishment of the visual novel genre outside of Japan, owing to break-out hits like Ace Attorney (Free) and 999 ($4.99). Like many sub-genres, romance games got their start primarily by targeting men or teenaged boys, offering a wide selection of cute girls with varying personalities for the player to try to woo. Unlike many sub-genres, somewhere along the line publishers got the idea that such games might appeal to the other half of the human race, too. While there are plenty of games for all combinations of gender and orientation in the modern romance game scene, there’s no question that the biggest share of the non-explicit market is aimed squarely at women.

The average game section in a Japanese store typically has a whole aisle dedicated to women’s games. Western culture might have you expecting a mix of hot pink and questionable games based on kids’ licenses, but if you venture into those aisles you’ll see that the bulk of the shelf space is occupied by group shots of young anime men with intense eyes and a keen fashion sense. There’s a wide variety of settings that these would-be suitors occupy, as well. Lots of high school students, princes, and princesses, naturally, but you’ll also see romance games with more exotic settings such as space, fantasy worlds, and in the case of the popular Hakuoki (Free), the tail end of Edo-period Japan. I can’t speak to the entire appeal of this genre, but I have to believe that the relatively strong writing seen in the more popular games is a big part of it. While the better games in the genre usually have an overarching plot, the focus is set squarely on the characters, forcing the writers to spend a great deal of time and effort on making sure each one is interesting and worthy of inclusion. 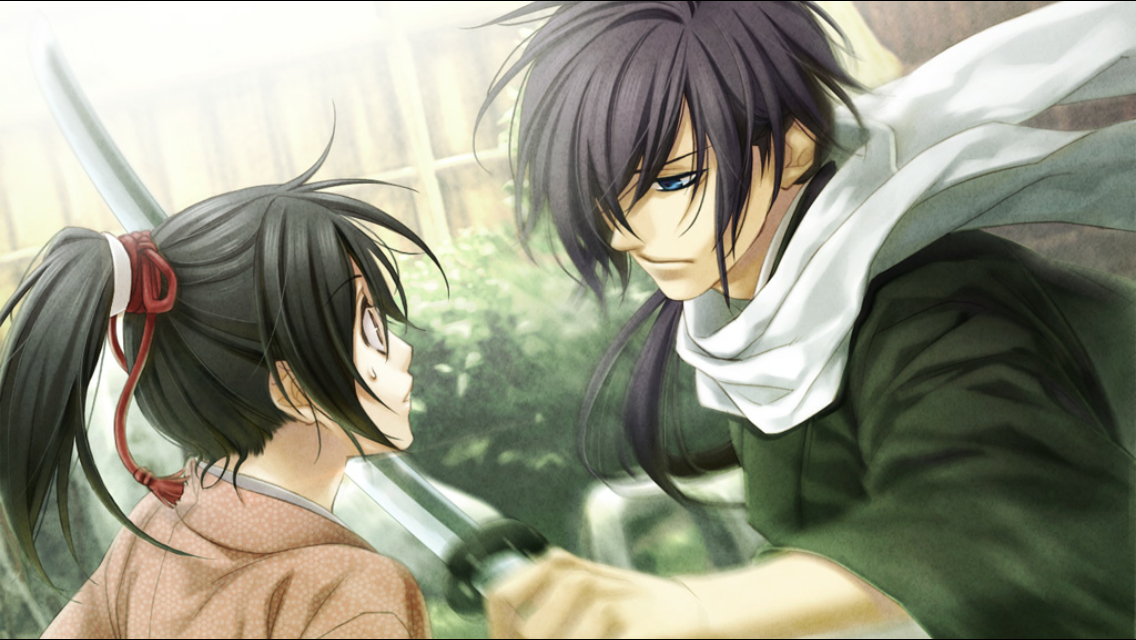 Romance is a lot more subtle in Eastern cultures than it is in Western culture, and with most of these games originating from Japan, it’s no surprise to see that reflected in these games regardless of the setting. Hakuoki is no different, and its Edo-era setting only reinforces those conservative cultural values. You play as a young woman named Chizuru Yukimura who has come to Kyoto in search of her missing father. You almost immediately get into some serious trouble that ends up with your falling in with the Shinsengumi, an elite group ostensibly dedicated to keeping the peace in Kyoto on behalf of the Shogun. Those who are up on their Japanese history know this was a real group, and Hakuoki uses the names and loose personalities of the real leaders for its main cast. I’m quite sure they weren’t all this good-looking in real life, but here they’re a real bunch of heart-breakers. Young, attractive, lean, muscular, impossibly stylish hair, and each one with their own personality to crack, it’s from this pool of warriors that you’ll aim to get your pick of five possible romances. There’s also one extra possibility from outside the group, making a total of six potential partners for Chizuru.

In the background, there’s a big plot brewing full of supernatural spookiness, mad science, and a heaping helping of the political games that actually occurred around this time. Even if you’re not interested in wooing boys, you might find yourself drawn into the story. It has a lot of interesting turns, and it manages the tricky tightrope walk of being heavily culturally Japanese while explaining just enough to keep the player from feeling lost. While the game makes use of foreign words and historical references without much exposition, an encyclopedia of sorts has been included that allows you to get more information at the touch of a window when these words or phrases first come up. Since a lot of it is based in real history, you can actually learn a few things while you play. Fans of Japanese culture will likely find the story especially fascinating. Sure, its story is full of fiction and exaggerations, but alternate histories can make for some pretty imaginative and compelling tales. 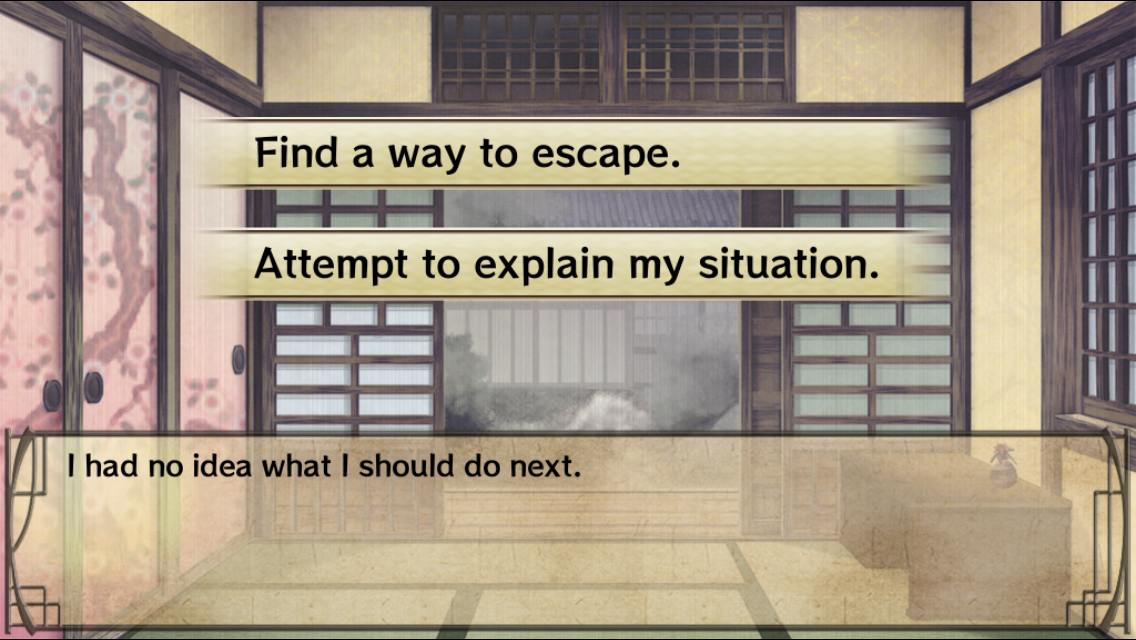 The game itself is not so different from a gamebook, but with generally fewer choices to make. You’ll be doing a lot of reading. Every so often you’ll be prompted to make a choice that will steer the story and give you the chance to increase your favor with one of the men. You’ll end up with one of a huge number of outcomes, though there are basically 12 proper endings to the game. Some of them are bad endings, some of them are good endings, and a few are “good", which is to say you might shed a tear or two. Each route offers up some unique images that are added to your gallery album once you’ve seen them. Part of the fun of games like these is in collecting all of these pictures, which will require you to investigate every branch of the storyline. Doing so also offers up the added bonus of filling out more of the story. This mobile version includes the extra content from previous versions, plus an extra exclusive storyline, so even veteran Hakuoki fans will have something new to play with.

Besides having a great hook for its main plot, the big reason why Hakuoki is one of the most popular romance games in the world is down to its excellent cast of characters. While they initially fall into stereotypes that will be familiar to most anime or manga fans, the more time you spend getting to know each one, the more their unique personalities begin to stand out. Each one has a story worth pursuing just to see what they’re hiding behind their early masks. This kind of nuance is still rare in video games, even in the narrative-heavy gamebook genre. So while you’ll be spending the majority of the game’s ten or so hours reading and advancing text, it’s surprisingly difficult to put down. If you’re a straight male, you might find yourself uncomfortable at certain moments, particularly in the beginning, but after a while it’s quite likely you’ll find yourself too wrapped up in the story to feel self-conscious about it all. At the very least, I can assure any worried gentlemen who are reading that Hakuoki maintains a strict ratio of no less than five dudes killed for every dude smooched. 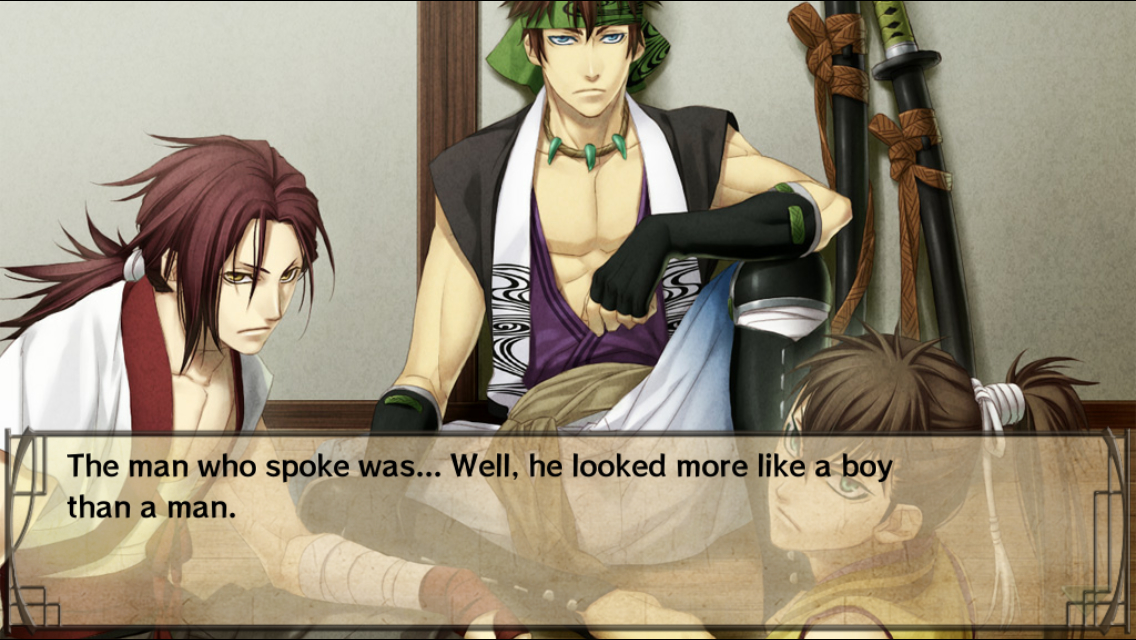 As befits a property of Hakuoki‘s stature, the production values are very good. Granted, this is a visual novel so you shouldn’t expect any animation, but there are a huge number of backgrounds, poses, and facial expressions that help keep your eyes entertained. The special images are amazingly detailed and well-composed, giving you plenty of incentive to hunt them down. The sound design is very good, with excellent music and sound effects. Notably, most of the main cast are voiced in Japanese by actual decent voice actors, something that is more rare than you would think. It’s too bad they couldn’t include English voices for those that might want them, but the file size on this game is already pretty heinous as is, so they likely had to make a judgment call. Honestly, for games that take place in Japan and feature Japanese people, I personally get weirded out when they speak English anyway.

Also noteworthy, however, is the game’s price. At $27.99 for the Premium version and $29.90 if you buy it a la carte via the Standard version, this is one of the more expensive recent releases on the App Store. While we don’t usually talk much about prices in reviews here at TouchArcade, this is kind of an exceptional case. Unfortunately, I can’t tell you whether or not you’ll personally find it worth it, but the game loses almost nothing in its port to iOS and in fact includes extra content above and beyond previous versions. It’s of comparable price to its other iterations, and in my opinion, that’s okay. It’s also worth pointing out that it’s considerably longer than almost any other gamebook-style game on the App Store, so the value proposition isn’t as relatively weak as it appears. If you’re not sure whether or not you’ll like it, the Standard version not only gives you a taste but also allows you to proceed in chunks. Sure, you’ll save $1.91 if you buy it all initially, but on a relatively big purchase like this, that two bucks might be worth your peace of mind. 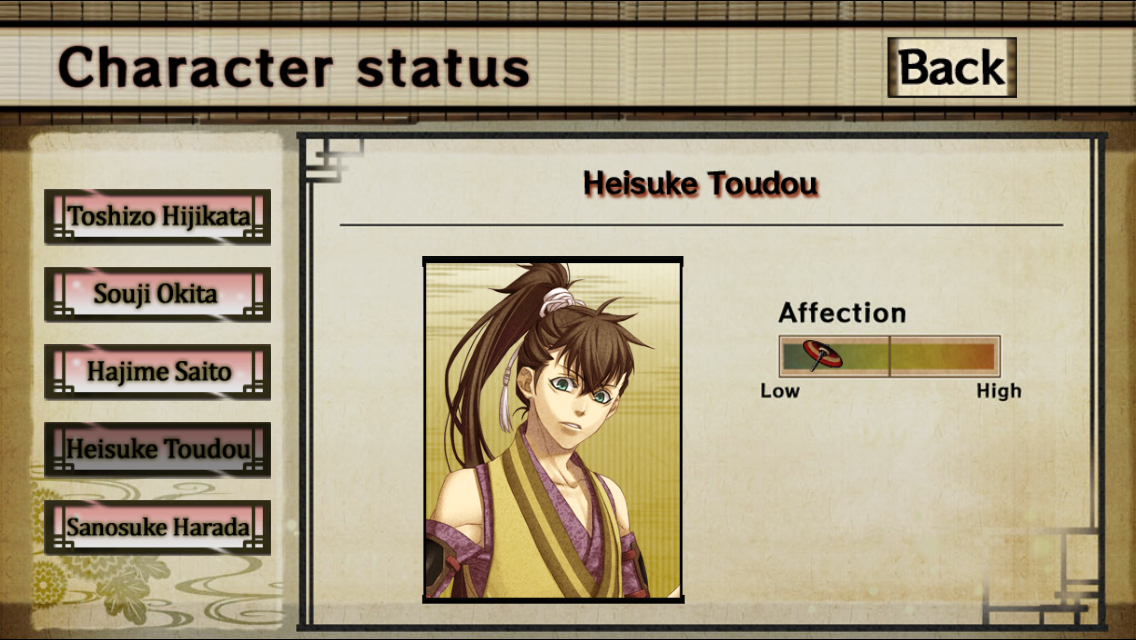 I ended up enjoying Hakuoki more than I initially anticipated I would. The story is quite good, the characters are interesting to get to know, and the translation is pretty solid. As a result it’s a very readable visual novel. There are enough story branches and endings to make replays enjoyable, with a few handy features to help you move quickly through sections you’ve already covered. With any luck, Hakuoki will be able to pull off what it did on other platforms and open the gates a crack for more localized Japanese visual novels and romance games. Variety is the spice of life, after all, and there’s not much else on the English App Store that offers quite the same package as this game does.