I often hate when I’m right; you tell a friend not to climb that tree, he does, he falls, and then you have to rush him to the ER. Yet, there are times when I’m glad to be right, and the case of TenBirds’ Ire: Blood Memory (Free) is one such case. When I decided to draw attention to the game recently, I did so because of the influences cited by the developers: Demon Souls, Dark Souls, and Monster Hunter, three games that are demanding and relatively-slow paced and that aren’t the kind of influences most iOS developers will cite. I was quite positive in my write-up, and even though most commenters dismissed the game outright because of its F2P monetization model, now that I’ve played the game, I’m glad to say that I was right about this game being one to look forward to. Ire is a brave and successful attempt to give iOS gamers a challenging, tactical Action-RPG that offers a great and complex battle system wrapped in a demanding inventory and forging system. While the game isn’t perfect, it might actually come pretty close to that if some of its issues are addressed in the future, provided you enjoy difficult games that punish you often but reward contemplative, tactical gameplay.

The game is at heart a demanding Action-RPG whose hero jumps from short battle to short battle fighting increasingly-difficult enemies that can only be beaten if you learn their attacking and movement patterns and plan accordingly. When you start Ire, you get to pick one of three weapons – Lance and Shield, Gauntlets, and a Sword. The game’s tactical intricacies start from as early as this decision because each weapon forces you to adopt different fighting styles ranging from more attacking to more defensive. However, even with the quickest weapon, the game’s fighting system often feels like a contemplative dance routine where your partner is a giant tree trying to rip your head clean off your shoulders. 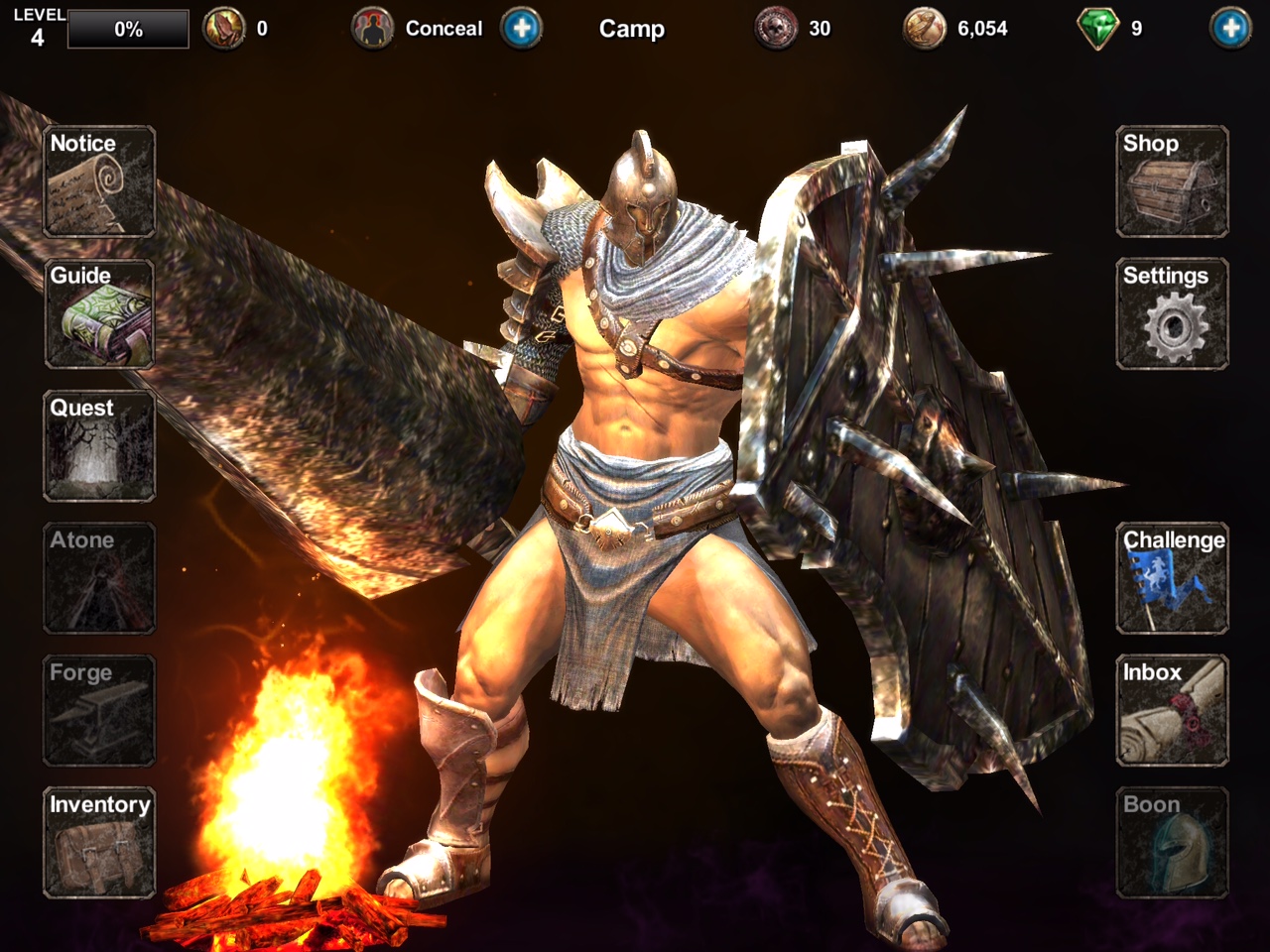 Any player who’s spent time (or perished) in the Dark Souls/Demon Souls  universe will immediately recognize the way Ire‘s battles play out. Those who haven’t should keep in mind that this is not a button masher by any means. Each enemy has its own pattern of movement/attacks and its particular weaknesses/strengths, and in order to be successful, you need to study those patterns and learn to react accordingly, otherwise each quest will feel like a groundhog day that ends in swift and violent deaths. You can also use the environment – exploding barrels and the likes – to damage your enemies. What I hope was different was the camera angle and zoom level; too often I had to guess what my enemy was doing because the camera was zoomed in too close. Maybe having the camera zoomed out a bit and tilted so I could see more of the battlefield would have enhanced the tactical nature of the game’s fights even more. 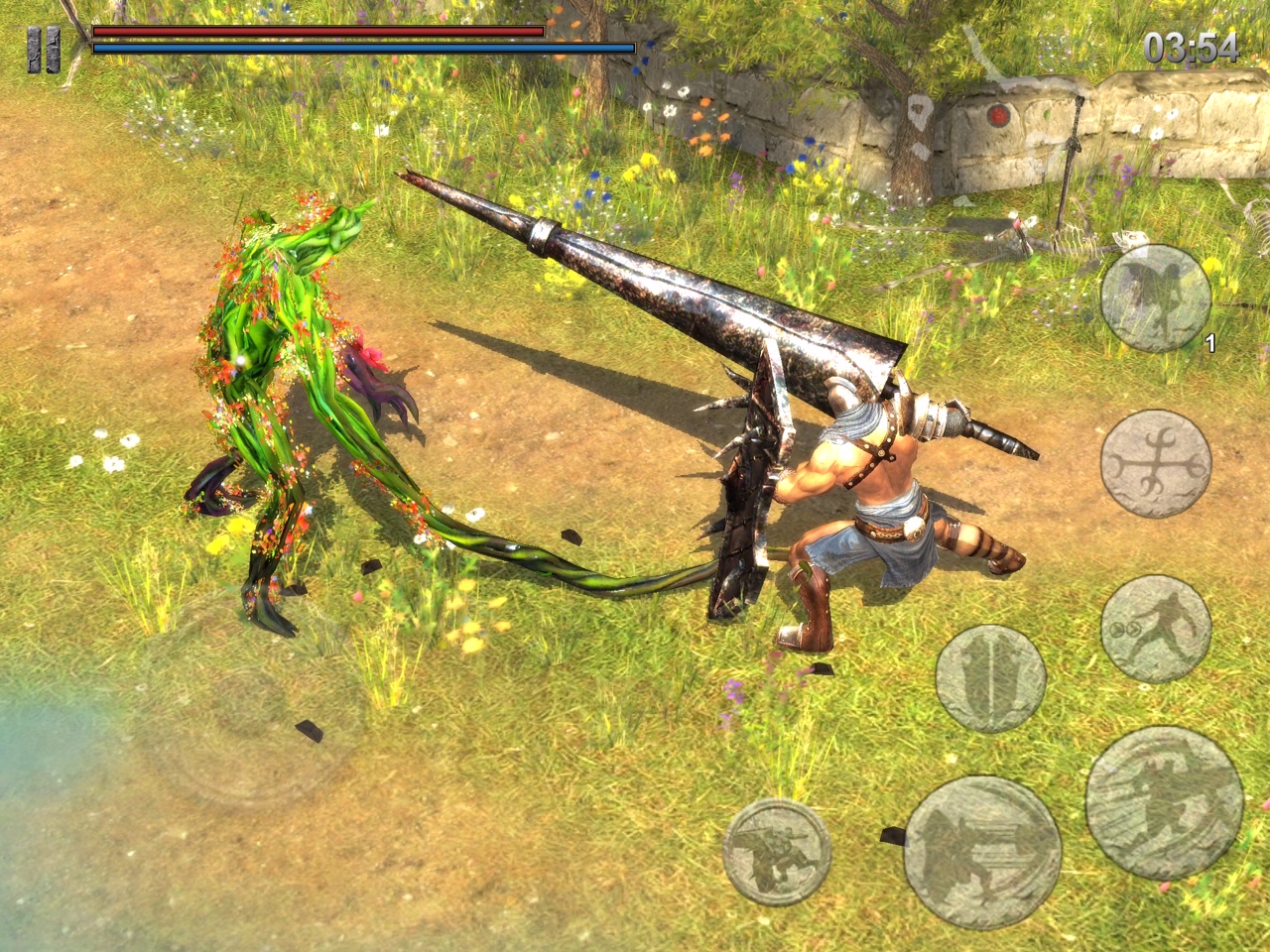 While the battle system is fine-tuned and obviously the product of careful consideration, the same can’t be said of the in-battle UI, which I suppose is the consequence of the tight budget TenBirds had for Ire. As you can see in the various images, there are seven on-screen buttons and a virtual stick, and they take up a lot of the screen and often block your view. The good news about them is that I found the buttons very responsive, a necessary feature in a game where timing is key. The game also has MFI game controller compatibility, which is good news for those who prefer to play iOS games that way. The bad news is that the controls aren’t customizable at all – I wish I could shift the buttons and the virtual stick around and change their size and opacity.

Fortunately, though, the in-battle UI didn’t get much in the way of enjoying the game’s tactical battles. In order to take advantage of the enemies’ different weaknesses when they attack or move, you’ll have to really become familiar with how each of the weapons work and how to best use the various combos you can execute. Each weapon offers around seven different combos, so timing them and figuring out the best distance from which to execute them becomes an art in itself. And don’t equate combos with button mashing because the game’s stamina system will force you to think carefully about when to do what; pressing attack more than a few times will result in you standing in front of a huge minotaur-like creature, too exhausted to even swing your weapon and silently awaiting your fate. 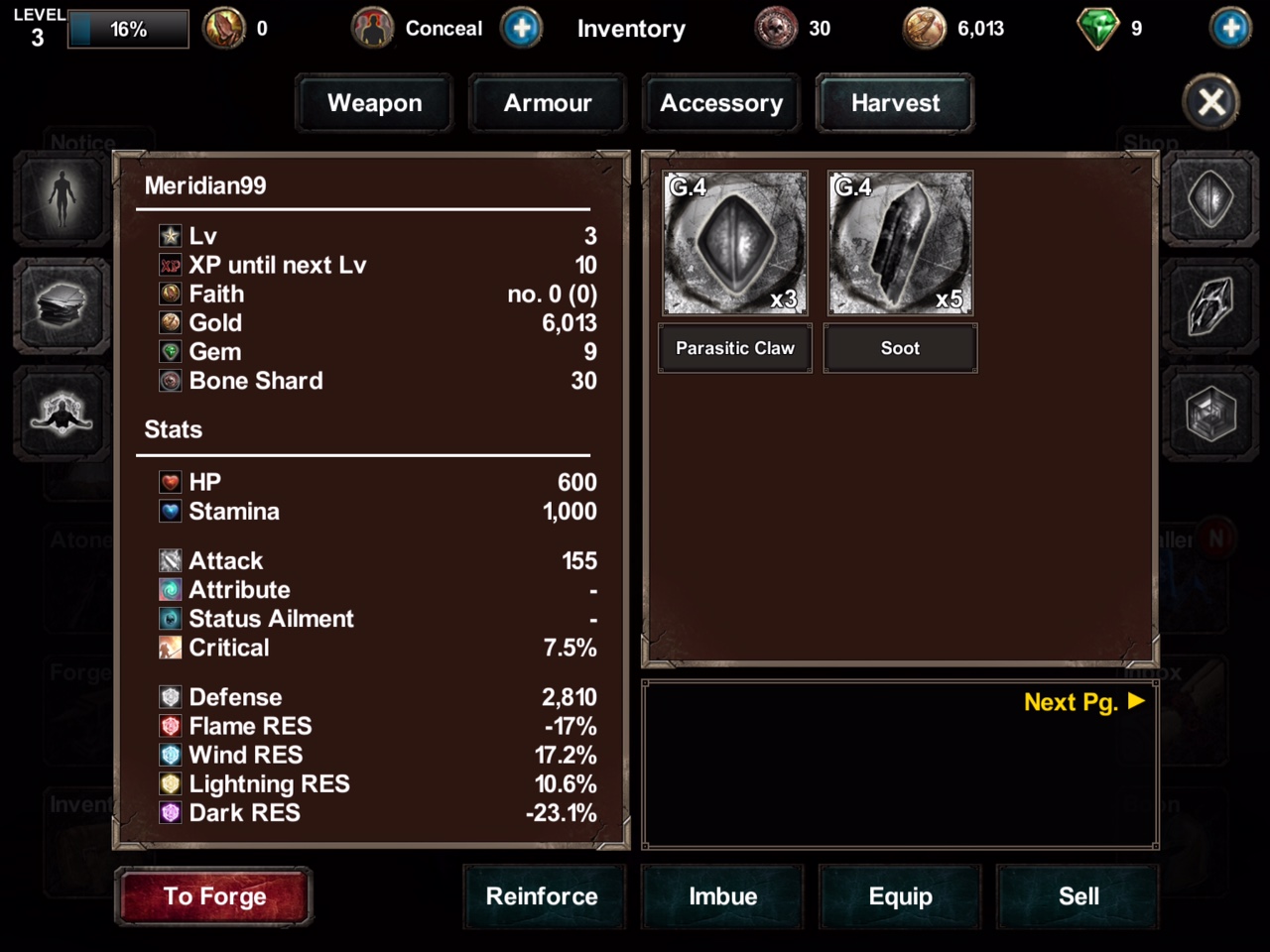 The need to carefully consider your next move applies not only to the tactical battles but also to upgrading your equipment and forging new weapons and armor. While most games create a linear upgrading progression  – each upgrade is better than the previous – Ire forces you to think more carefully about which way to go with your upgrades. Armors, for example, can have resistance to flame but not to wind, or resistance to lightning and wind but not flame. When you are ready to start a quest, the game will inform you of your enemies’ elemental strengths and weaknesses, and you have to pick (or forge) the right kind of armor that offers protection from the right kind of elements. In other words, just like the battle system, Ire‘s equipment upgrade and modification system is a thinking man’s or woman’s game.

Still, I wish the inventory and forging menus were easier to navigate and did a better job at explaining all their intricacies. Yes, there’s an in-game guide, which is adequate, and yes, part of the challenge of the game is figuring out these systems, but for anyone who hasn’t played any of the Souls games, frustration will be a constant companion on your quests, at least initially. A better guide would’ve been of great assistance to iOS gamers first entering the world of Ire since while many will appreciate the demanding gameplay at the core of the game (iOS gamers are actually quite adept at playing incredibly challenging games), most might not have the patience or time to discover by themselves all the intricacies of the game’s systems. 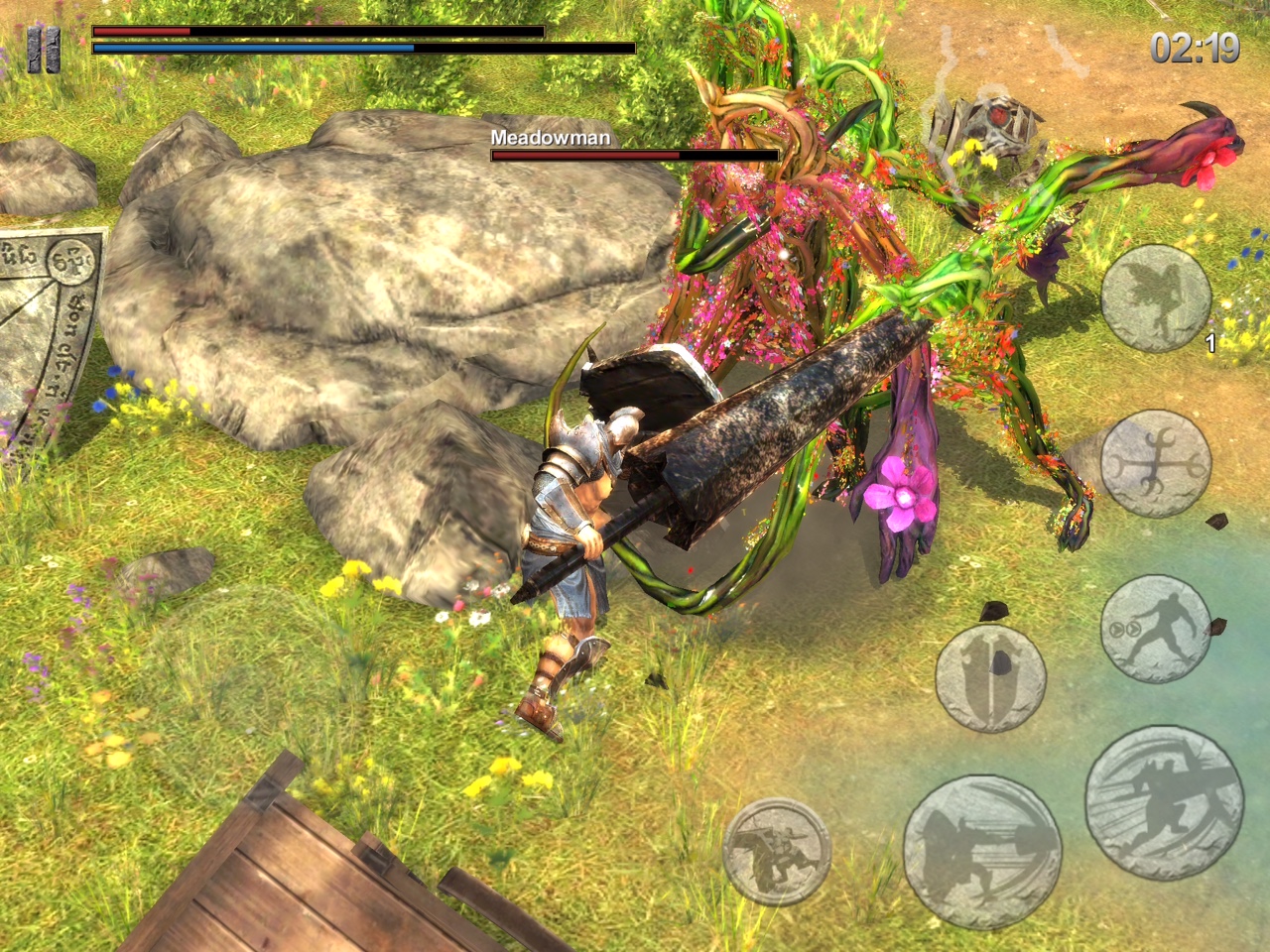 Despite the developers having to work on what they’ve called “a shoestring budget," which obviously affected the menu and UI design, the game’s visual don’t suffer for it; the characters are very well drawn and animated (with some amazing and imaginative enemy designs). The lighting effects are very well made and the gore adequate for the genre. The game has more graphical options than most iOS games, but if you turn all the effects on, such as light and bloom, be prepared for some stuttering, even on an iPad Air. And the tight budget hasn’t affected the game’s content either. Ire has plenty of content, including about 40 quests that can be played in various modes, and also an intertwined multiplayer mode of sorts which, like the Souls games, allows you to summon Boons (AI versions of friends) to come and fight alongside you, although they might not always be helpful. You can also record your replays on Everyplay so you can show off the grace with which you can die multiple times. 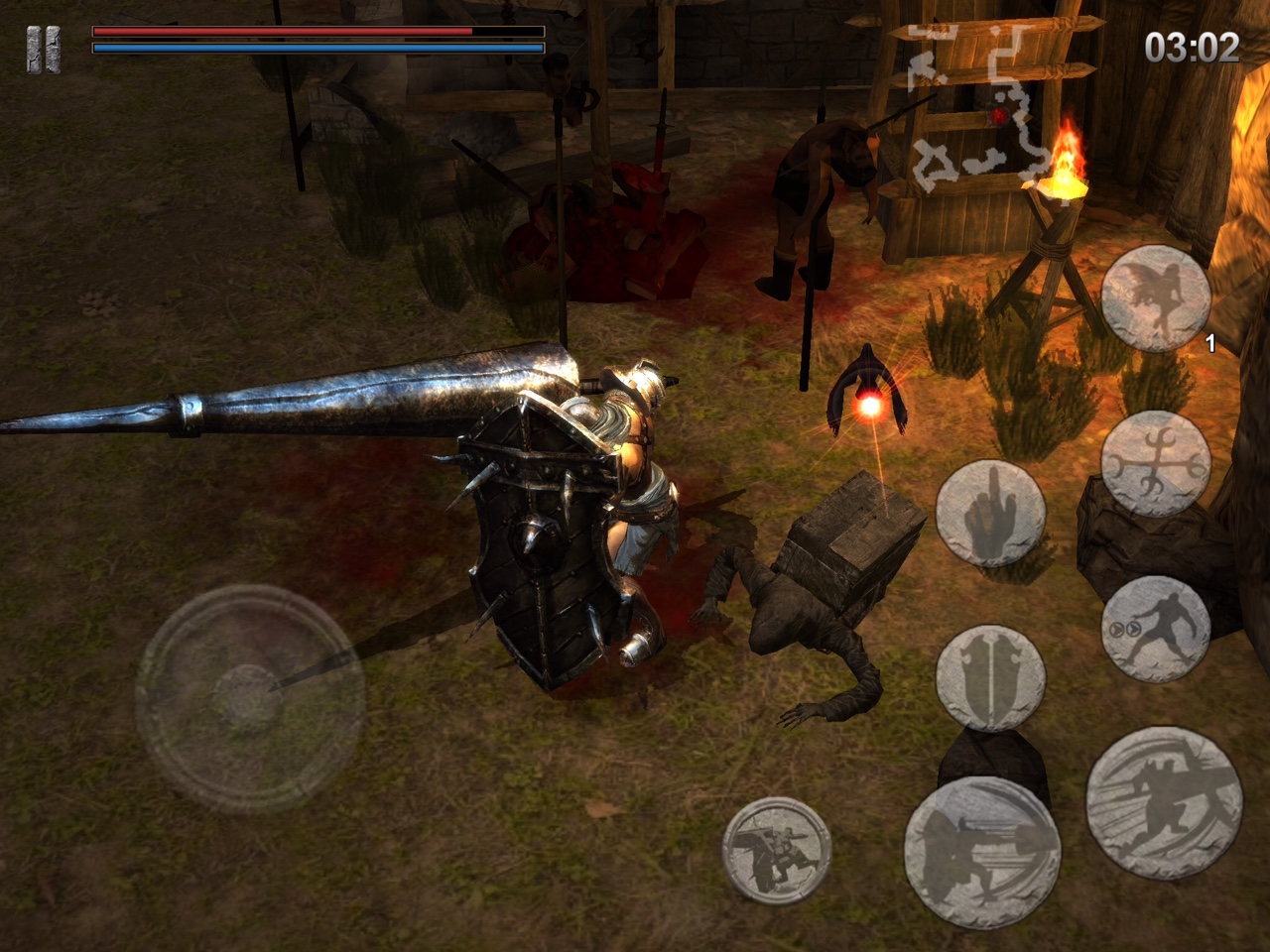 When it comes to the game’s monetization model, Ire is an F2P game but not one that tries to steal money out of your pocket while you’re busy killing monsters. The developers have stated in our forums that they’ve thought long and hard about which monetization path to choose from but realized that if an unknown company like Tenbirds went premium, the game’s fate would probably be a bleak one. They also considered going the “cosmetic IAPs" route because that was the closest idea to a “donation box" they could think of, but even if an armor is cosmetic, someone would have to design it, illustrate it, etc. So yes, the game is F2P but is definitely one of the most generous F2P implementations that I’ve seen on the App Store. The game offers many daily and quest-related rewards (or Challenges, as the game calls them) that give players all types of currencies, including gems. The game doesn’t hold anything back from the players, and I never felt that the game’s difficulty was being ratcheted up just to make me spent money. Yes, you’ll have to play some quests repeatedly, but while some would call that grinding, I call it playing a game I enjoy. World of Tanks Blitz is similar in that respect; I have to play with the same crappy tank over and over and over again to get enough XP and money, but I don’t mind because I actually enjoy playing the game. Same goes for Ire. Those who dismiss F2P games without even a second look might do well to remember that Hearthstone, WOT Blitz, and many other amazing games are also F2P. Don’t hate the monetization model, hate the bad monetizers.

Ire is a relatively-rough gem with a great art-style, demanding but gratifying combat, and plenty of content to have you playing for many, many hours.Most of the games I review don’t stay on my iPad for long (space considerations), but Ire will stick around because it’s a great game to play in short or long bursts – upgrade a little, fight a little, die a little. While there are issues with the menus, guides, and the occasional technical hiccups, this game is definitely a refreshing addition to the App Store and a game made for those who would call themselves “hardcore gamers." It would really be a shame, then, if the game’s intended audience refuses to take a chance on Ire simply because of a preference for “premium" games.