It’s hard to imagine a more generic studio name than “Game Dev Team," but their recently-released title Hardboiled ($1.99) is anything but generic. A lot of energy has gone into this one, the game content is rich, compelling and definitely worth a play through. Hardboiled is a turn based, strategy RPG that explicitly mentions the classic Fallout series as inspiration. In Hardboiled, you play as Max, a wanderer in a world ravaged by nuclear war. Armed with makeshift weapons and equipment, your mission is to explore the devastated town in search of items you need to progress in the game.

The Hardboiled game is arguably very similar to the first and second Fallout games and reminds me of Drylands. This game has two game play sections. You move about the town in real time to explore and interact with locals, then change into turn-based attack strategy when you enter battle mode. Although the town map is relatively small, there are a lot of interesting interactions that can occur depending on your reputation in the eyes of the NPC. From the start you can choose to build up a good or bad reputation, and as you progress through the game you learn quickly that this reputation unlocks many areas and characters you need to succeed. Every interaction you have comes with difficult choices. For example you can attack an innocent homeless person to gain her belongings but by doing this, your reputation will decrease dramatically and the guards will not hesitate to kill you on the spot. 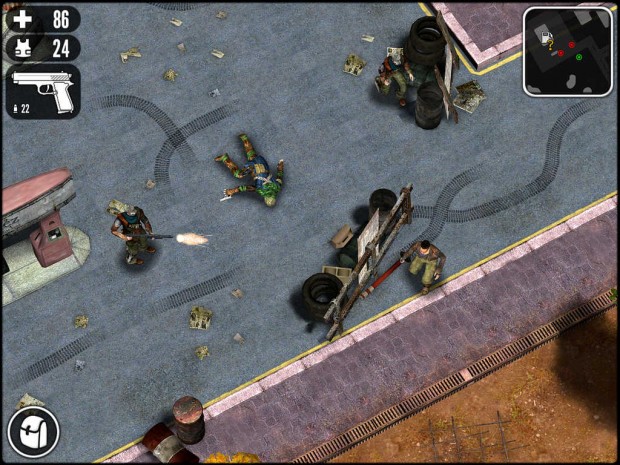 Just like Fallout, tactical battles are the main lure that makes Hardboiled quite interesting. You can even target different parts of the body while fighting an opponent in order to achieve a range of goals from disarming your opponent by shooting their hands, or wreaking more severe damage by targeting the head. Not only that, Hardboiled also provides tactical options to take cover behind a number of objects similar to the game Shadowrun Returns. By utilizing a variety of objects that are all around the city, you can protect yourself from the effects of greater damage to successfully defeat opponents.  You also start the game with body armor that allows you to sustain a certain level of injury.

The game difficulty can be frustrating at first, but if you stick with it, you’ll soon figure out what to avoid. My biggest issue is with the enemies following you. Once you get into a fight, the enemies and their friends will follow you across the whole map incessantly. They will abandon their camp to pursue you and along the way Marauders will join in for no reason which can quickly become overwhelming. At one point I had 7 bandits chasing me; it’s tough one on one, but it’s a no hope against 7. What is also confusing is that if enemies run away from you get a Victory; it’s odd that it doesn’t work the other way around to give you a chance to regroup? Also, there are town guardians in the game that claim to protect the town, however the guardians won’t assist you even if you have a positive reputation, they just stand by. 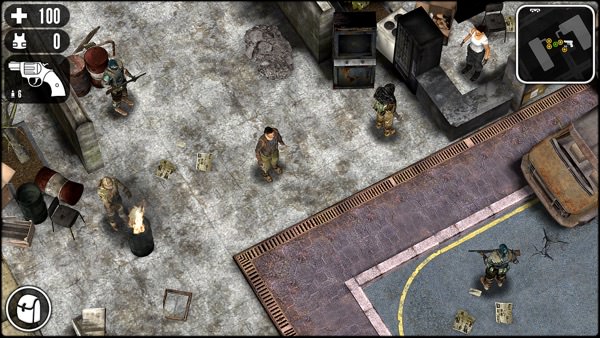 Hardboiled is a fairly solid game, although it lacks a lot of attention in terms of the story to boost the overall presentation and replay value of the game. With a strategy game like this the story should be key, and I found the intro quite empty in terms of a back story which would have given the character more staying power. I think it would be more interesting if we were treated to a cut-scene to illustrate how Max was stranded there.

The game doesn’t have a huge world like in Fallout. There is just a town with some wastelands surrounding. It takes around 8-10 hours to complete the game story, maybe more, it will depend on your luck and commitment. Quests would be a welcomed inclusion as would Joystick controls and an explanation of the map icons.

My advice for a good play through, is to not care about reputation, go after scavengers. Use your knife and if they have a gun, try to disarm them. Sometimes they have a ton of gear and other items you can use to trade. Lone bandits and animals in the nature areas are good for building up experience but make sure you have a decent gun first and carry a grenade to disband multiple attackers which are frequent. The best weapons are the revolver or biretta, you can dump or trade the rest. Watch the enemy movement, and when you can get one alone move close enough to begin the fight. Try not to attack more than one person at a time, the turn based fighting gives their friends plenty of time to come over and join in so make sure you get your victim as alone as possible before you engage. One more tip, don’t open the container next to the Hunter, some things are best left alone. 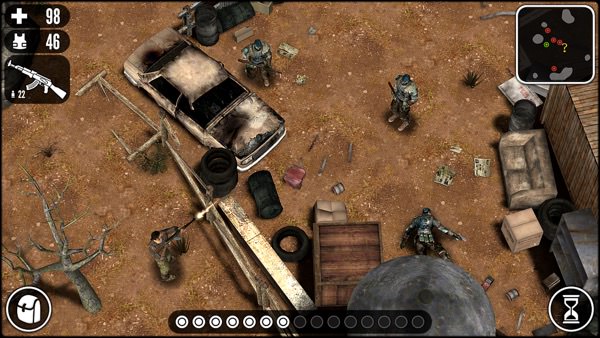 That all being said, I’m still enjoying the game and look forward to any updates. Hardboiled remains an interesting RPG that fills the Fallout-style strategy game void that makes a game like this rare to encounter on a mobile platform. If you love RPG’s then Hardboiled is a must.