It’s been almost a year and a half since the last volume of Gamebook Adventures, the homegrown series of adventures that kicked things off for prolific gamebook publisher Tin Man Games. The developers at Tin Man have certainly kept busy in that time, adapting several Fighting Fantasy books and a few other treasures like Ryan North’s To Be Or Not To Be ($6.99), and while many of those have been great fun, I’m sure I’m not the only one who has been waiting for a return to the world of Orlandes. The tenth volume of Gamebook Adventures, Lords Of Nurroth ($5.99), brings the setting back with style, casting you as a professional liberator of goods who heads out on a routine job and finds a lot more than they bargained for.

As usual, you begin the game by choosing which difficulty you’d like to play on. After that, you’ll choose your name, gender, and roll up a few of your character’s stats. Being an expert in acquisition of misplaced items, you’ll need to choose among four different specialties to distribute a few extra points. You’ll be rolling against these values as you play through the game, but given the scarcity of points you have to assign, you’ll be somewhat deficient in at least one of them. You’ll want to keep that in mind as you make your decisions during the game, because accidents can be fatal in games like this. 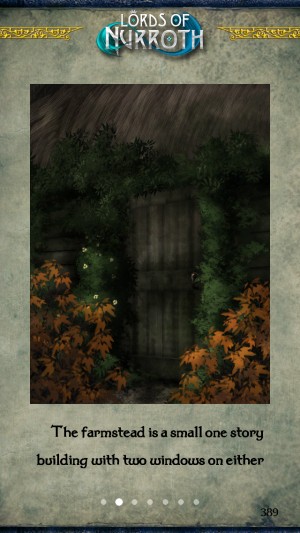 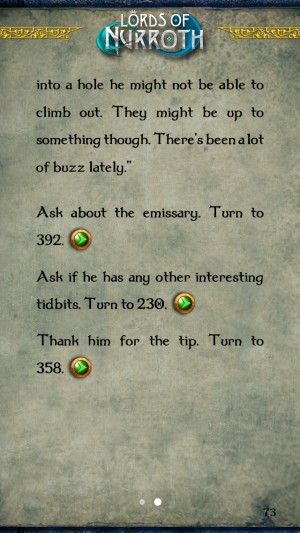 After a bit of a preamble, you’re given a job to stumble upon a certain important document that seems to have erroneously ended up with someone it shouldn’t have. You’ll need to work out your plan for infiltrating the establishment while trying not to get killed on the way. There’s an added complication, you see, and after you finish your job you can choose to address it or walk away. Should you go with the former route you might end up wishing you hadn’t, because there are big things going down in the city and nobody’s going to care if a little old treasure hunter gets caught in the crossfire.

Given that this is a story about a person who favors less direct means of combat, it plays a little differently from a lot of gamebooks. You’ll still be rolling the dice pretty often, but rarely in a face-to-face fight. Similarly, your options are more based on what you know as opposed to what you’re carrying. There are some items that will prove useful in your quest, particularly whichever special item you pick near the beginning, but making your way in Nurroth is more about what and who you know as opposed to what’s in your pockets. As is the general case with Gamebook Adventures versus Fighting 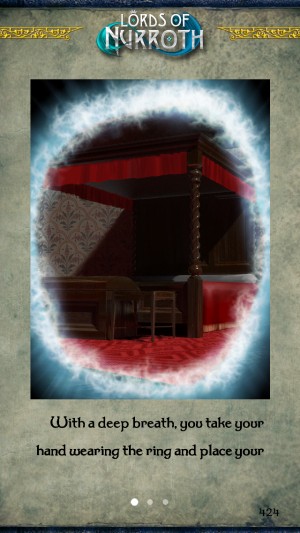 Fantasy, Lords Of Nurroth is less interested in punishing you for wrong choices as it is in guiding you to alternate conclusions. Though I appreciate the tough-as-nails classic mentality of the Fighting Fantasy series, it’s nice to be able to relax a bit and just see where the story takes you. Only a little bit, mind you. The game still has some tooth to it.

It’s quite an interesting story, especially if you’ve been following the series so far and have a good working knowledge of the political landscape of Orlandes. A couple of big moves go down in this book that should have some interesting repercussions for the future. It’s quite fun to get to see these things play out from the perspective of someone who is largely uninvolved in things, especially if you choose to see that ambivalence through to its natural conclusion. The writing, handled by fantasy author and sometimes-jouster Dylan Birtolo, is well-constructed and enjoyable to read, with a few very memorable characters and just enough detail to capture the dirty feel of Nurroth and its morally-questionable inhabitants. Like the other volumes of this series, Lords Of Nurroth is perfectly enjoyable as a standalone story, even if it is heavily enriched by having played through the events of the other books. The writing is accompanied by some excellent artwork done by Simon Lissaman, whose work you may remember from Tin Man’s version of Starship Traveller ($5.99). He’s got a genuine skill for faces, in my opinion, and his talents go well with the prose.

From a technical point of view, there are typos here and there and sometimes the spacing between words and letters is a bit off, but such instances are fairly rare and don’t detract from the experience in any significant way. Tin Man’s trusty engine does its job as well as ever, and the usual litany of extras are included. There are achievements to unlock, pieces of artwork to collect, and plenty of bits of extra information included in a glossary in case you want to learn more about Orlandes. It’s perhaps not as fancy as some of their other recent titles, but I think there’s something to be said for maintaining consistency with the earlier books. 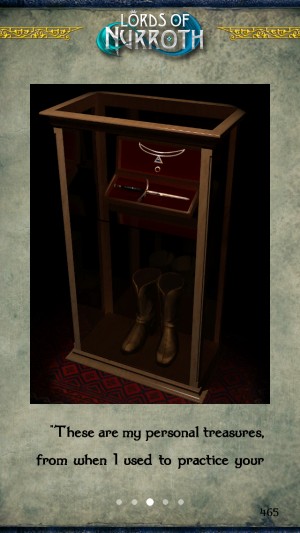 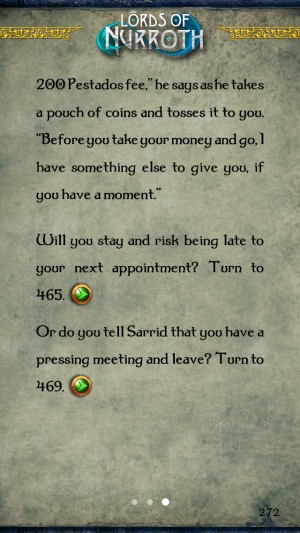 I hadn’t anticipated how good it would feel to set foot in the world of Orlandes again after a bit of an absence. While I think Tin Man does great conversions of other books, there’s something about the original work they put out that just feels excellent. This adventure is nicely balanced, well-written, and has lots of fun events to stumble across. It draws nicely from the wider Orlandes lore while adding something back into it. Given the happenings of the last couple of Gamebook Adventures, I hope we won’t have to wait quite so long for more of the series, but exploring all of the nooks and crannies of Lords Of Nurroth will keep me busy for at least a little while. While it may lack gameplay innovations or flashy razzle-dazzle, it’s a good solid example of the gamebook genre that should sit nicely in the library of fans.