Curling as an influence to a high score game? What? That’s what Gameblyr’s Into the Circle (Free) promises and delivers on. Curling is an underappreciated sport here in the United States. It’s something I always try to catch whenever the Winter Olympics happen, or if ESPN3 has some on. It’s surprisingly entertaining! It’s better than watching golf on TV. There’s not a lot of great curling games out there, so hey, we’ll have to settle for curling-inspired ones like this. And Into the Circle winds up being a fun little game, albeit suffering a little bit from pay-to-win syndrome. 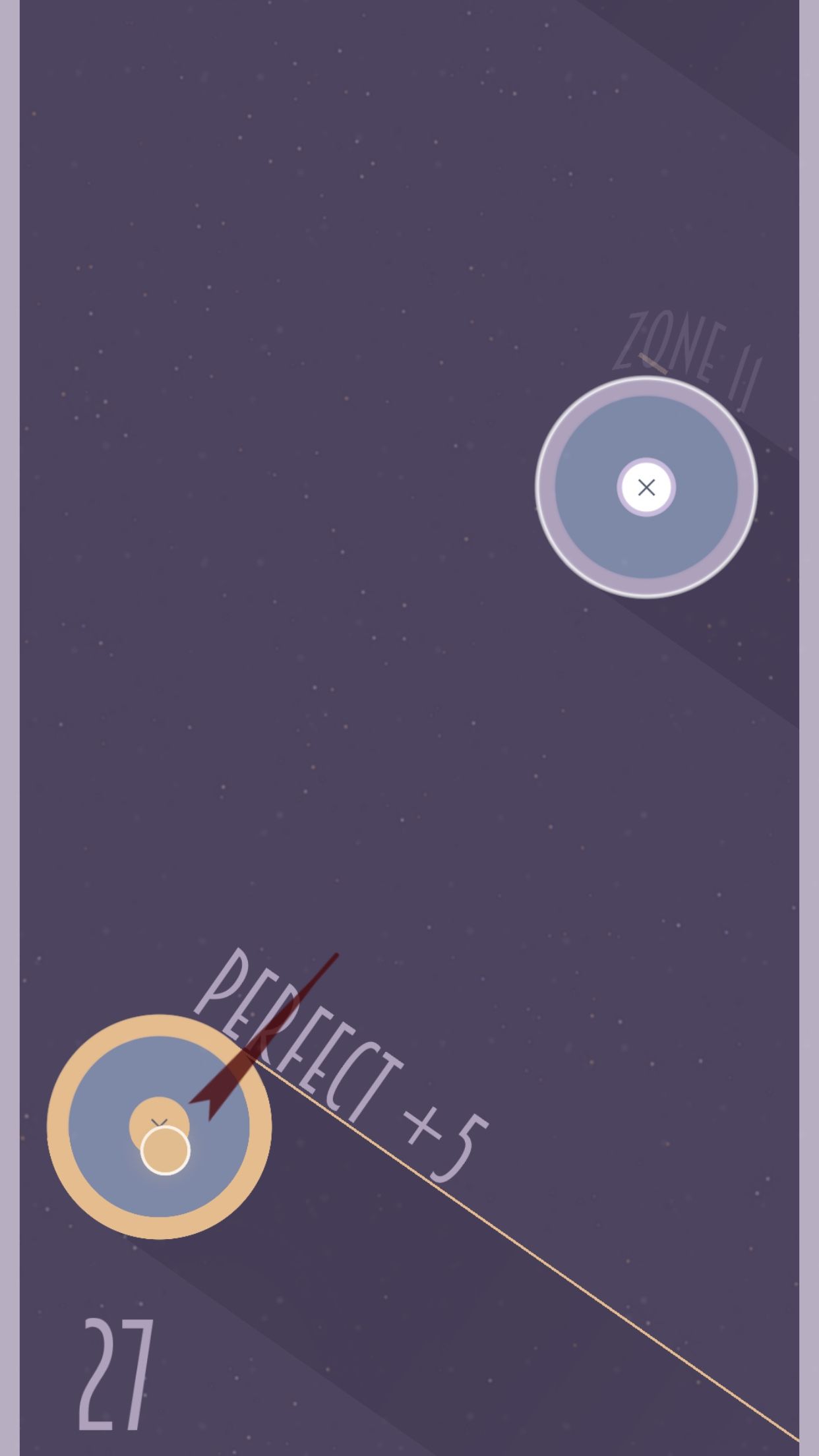 Your job is to shoot your ball into the next circle, getting a point for doing so. If you make it into the center, you get a “perfect" bonus, which increases throughout the game for each perfect you get. So the tenth perfect is worth +10 points and so on. You have to time the aiming indicator, and then hold to set power, and if you don’t make it into the circle? It’s game over, though you can continue by spending stars. The further you get in the game, the faster that aiming indicator goes, so try to get your perfects early on.

The game is free-to-play with ads. If you pay $3.99, you unlock the “Ultimate Edition" where you get 500 stars, disable ads, and unlock the other two themes. I most prefer the violet theme, though they all have a nice pastel-y look to them. The game also uses some stylish art-deco-inspired fonts. It’s all part of the minimalist trend that’s all the rage, still.

Into the Circle is a fantastic game to chill out to in a zen-like way. There’s nothing rushing you, it’s just about the next shot. This doesn’t mean that it’s easy at all, just that it’s a nice game to just focus on the task at hand without feeling any rush. There’s only the one big distraction, the vortex that pops up once in the game. But after you deal with that, you just have to deal with making the next shot. It’s a game that’s got a weird mixture between tension and calmness. It does get progressively more difficult, as the shot aiming indicator that goes back and forth starts to increase in speed. Still, it’s just about that one challenge: trying to make it into the circle, and then possibly into the center in order to get that perfect score. 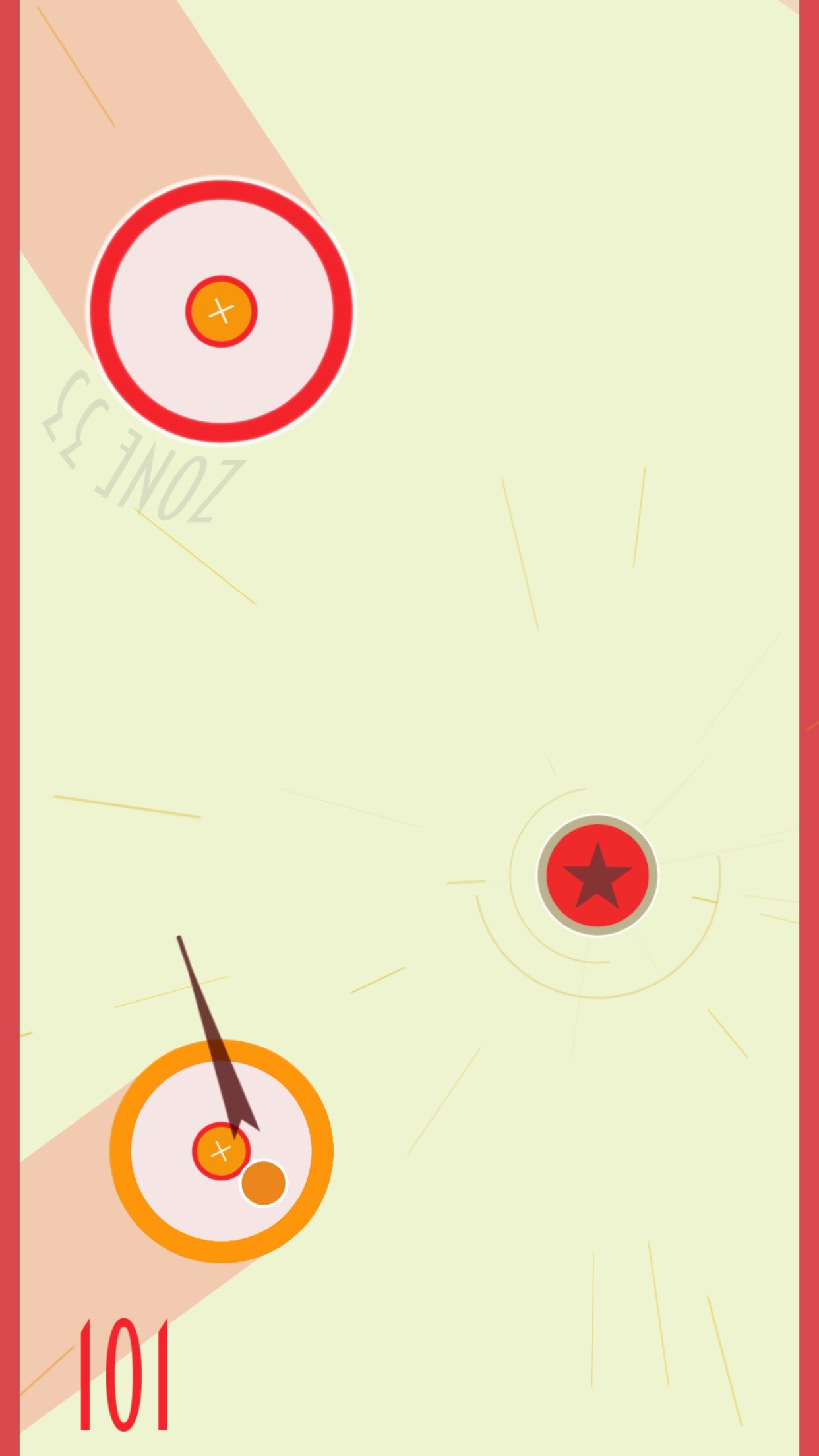 The thing that does bother me about Into the Circle is the stars system. The 500 stars you get for the Ultimate Edition IAP will last you a while, you can get 5 for watching a video ad, there are daily rewards, and even periodic leaderboard rewards can be had. I don’t have a problem so much with the cost for obtaining stars, that’s fair. It’s that the game allows you to use stars as much as you see fit to revive, with a cost of 5 stars per revive. There’s no limit to the number of times that you can revive, so theoretically, you can buy your way to a high score. I would like to see a limit on how often you can revive, because it seems a bit unfair to be able to buy higher scores.

Now, to be fair, the scoring system does mitigate the value of any one revive. Because the game rewards you for more of the perfects that you get by making each one worth more, eventually you can realize that hey, I’m really spending my stars in an inefficient way and should stop. But still, I’d prefer a system with a hard limit of revives, or even some kind of built-in system that makes future revives more difficult. Temple Run 2‘s (Free) escalating costs are a good system. As well, I think if there was a system that increased exponentially over time starting from 1, it would mean that you could earn your first continue for free by getting three perfects in a row. It would feel like a real reward. Right now, it feels like a difficult accomplishment comes with only the slightest of rewards.

While you do get stars regularly for playing daily, and for doing well in the leaderboards, it still means the leaderboards are effectively pay to win. It might be impractical, but if you keep working at them, you can climb up them. It’s a system that I do wish could be tweaked to make continuing either really impractical over time or limited. Gameblyr representatives have talked about how the stars are meant to be part of a metagame where you’re managing how many stars you have left, but it’s still a flawed system. I do think you have to play well at the game to get high scores but that creeping pay to win aspect sneaks in.

While I feel like the pay-to-win stuff will be a dealbreaker for many folks, I still like Into the Circle! The star system annoys me, but it’s not the end of the world, just a big problem. The game is still really fun, and a nice way to just kind of chill out to while still be challenged. I’d make some structural changes to it, but the core gameplay is fun and compelling no matter what, that it makes up for a lot of flaws.