One of my favorite things about being a gamer in the indie/mobile/Steam age is how many new genres seem to pop up all the time. You’ve got your twitch games, Minecraft-likes, Hex-likes, Flap-likes. A lot of “-like”s. Of course, there’s a fine line between inspiration and cloning, and the App Store is rife with examples of both. Toghrul Samadov’s Fatal Fight (Free) is clearly inspired by the PC game One Finger Death Punch (which itself was inspired by those stickman flash cartoons that were all the rage a hundred internet years ago). Fatal Fight may not be the first, but it’s still a great example of a pretty kick-ass new genre of quick fix gaming.

In Fatal Fight you play as a kung-fu master fighting off hordes of Sub-Zero lookin’ dudes. Why? The description in the App Store mentions something about a kingdom being torn apart by a “clash of clans” (subtle), but all you really need to know is that everybody but you needs to be slapped dead. 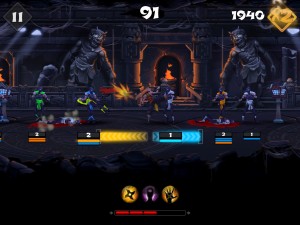 Aiding you in this noble quest are the trusty left and right sides of your screen, which need to be mashed by your thumbs to make the bad guys go away. Enemies pour in from each side and you need to tap left or right depending on their proximity to you and what color bar is under them. (So, pretty much exactly like fighting in real life.) In practice it feels a lot like Match–, er, Critter Panic! ($1.99).

It sounds really simple–and it is–but it’s shockingly fun. And brutally hard (eventually). What’s interesting is that at first it seems like a twitchy reaction game, almost like DDR without the music. But the more you get into it you realize it takes a huge amount of focus and quick decision-making to succeed. If you see five guys coming at you from the left, your first instinct might be to quickly tap five times. But then you might miss the fact that a weapon was dropped in the middle of it, and one of your taps picks that up instead of hitting a guy. That leaves one enemy un-smacked at the end. You panic and overcompensate by tapping even more, which leads to extra hits that connect with nothing, leaving you open on the right. Maybe none of that makes sense, but the point is, it takes a lot more concentration and thought than you’d think–and it’s absurdly satisfying when you get it down. 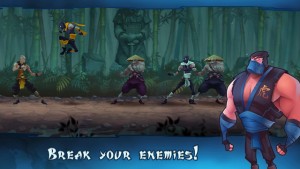 The game is free-to-play, but it’s not too bad. You have a stamina timer that only depletes when you lose, sorta like Candy Crush (Free) and its ilk. This shouldn’t be too much of a hurdle for the first few areas, but be warned: it gets really, really difficult later on, and you’ll feel the squeeze. Fortunately, there’s an IAP that essentially removes the timer and gives the game a more premium feel. Unfortunately, it’s $21. So there’s that.

So what are we to call this new sub-sub-sub genre? Post-mobile brawler? OFDP-like? Ultra-realistic kung-fu sim? Who knows. The point is, I’m loving these games right now, and you should be too. In fact, people in our forums have been digging this a lot more than the recent iOS port of One Finger Death Punch (Free)–a game so controversial it spawned it’s own off-topic hate thread. Fatal Fight is free, fair, and fun, so if any of that alliteration appeals to you, go hit that link.