When we say a game is “love it or hate it", we typically mean that some people are going to dig it and other people aren’t. Destiny Emerald ($2.99) is “love it or hate it" in a different sense. Sometimes I love the game, and other times I hate it. I can’t really decide which one is the overpowering feeling here. I love that it’s a fairly straight gameplay homage to the older Legend Of Zelda games, and that unlike most efforts in that vein, it actually delivers a satisfying, lengthy adventure. I love the thematic tip of the hat to Falcom’s Legacy Of The Wizard, with a whole family of selectable characters each with their own talents. The visuals are generally appealing, and the dungeon design is solid, if a little uninspired. I hate the unforgiving collision detection. I’m not a fan of the technical issues that end up slowing the game to a standstill or warping my character when the screen scrolls. The game’s economy is completely broken, and it has a serious effect on the overall experience.

Destiny Emerald comes from Watermark RPG, the developer behind the Sorceria games. That’s Sorceria (Free), not Sorcerian ($24.99), though with this game’s Darkslay family sending up Falcom’s Drasle Family, it’s clear they’re fans of the revered Japanese RPG developer. That said, Destiny Emerald is far closer in its gameplay to The Legend Of Zelda. It resembles the first one more than the others, but there’s a bit of Link To The Past in here as well. Your goal is to find the five shards of the Destiny Emerald to defeat an awakened evil. They’re hidden in a fairly large dungeon divided into themed sections. Each of the four members of the Darkslay family has their own skills and parameters, but more importantly, certain tools you’ll find in the dungeon can only be equipped by one particular character. You’ll have to use all of them if you want to recover all of those shards. 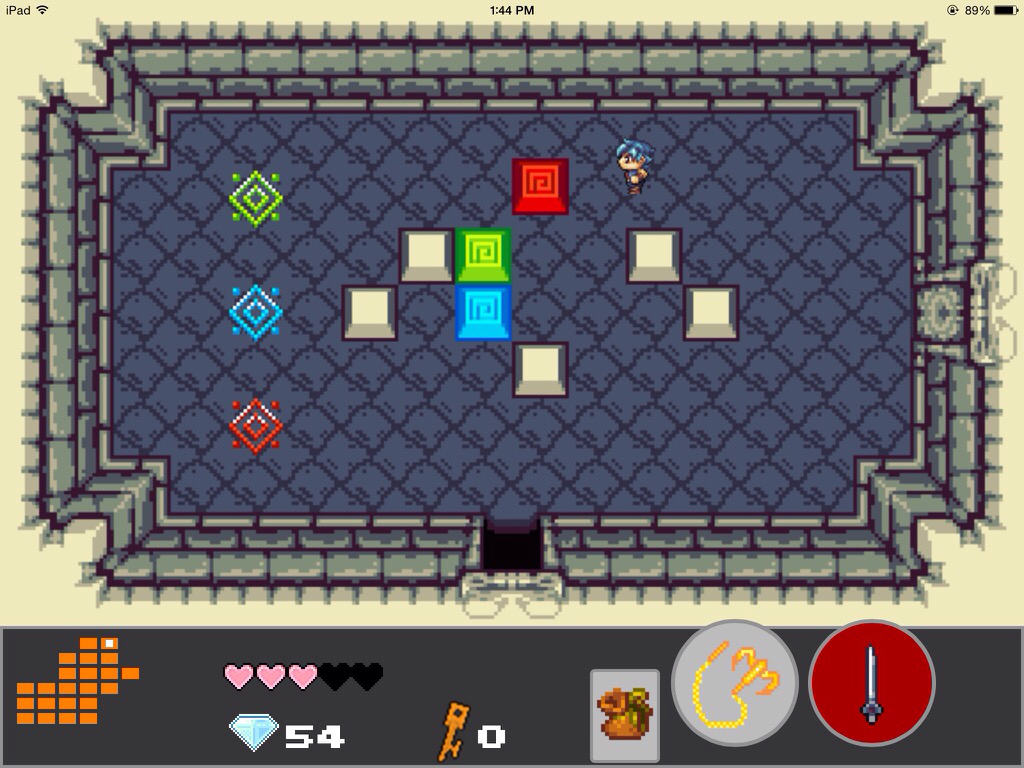 Basically, you’ll take one character into the dungeon as far as he or she can go, solving puzzles, collecting keys, and opening doors. Ideally, you’ll recover a tool on the way that allows you to go back to previous areas to find new routes. Depending on the tool, you may have to head back home to switch characters. Some of these new routes will reward you with treasure, but at least one of them will lead you to the next area. Provided you’re using the right character, you’ll soon find your way to a boss, who will cough up an emerald shard if you can kill them. Then it’s on to the next section of the dungeon and likely another character’s turn to shine. There’s a good rhythm to it all, even if a lot of the game is suspiciously familiar. It’s possible I’m mistaken, but I think this is the first iOS game aspiring to Zelda‘s design that includes almost everything. You’ll fight big bosses, bomb walls, burn bushes, push lots of blocks, collect tools, and pick up heart containers.

In terms of size, you can expect an adventure about on par with the first Legend Of Zelda, which is about five or so hours if you don’t die too frequently. It’s lengthy enough to satisfy and certainly doesn’t overstay its welcome. The map design is pretty good on the whole. There are lots of fun secrets to find and although the puzzles aren’t terribly taxing, they’re engaging enough. Unless you want to hunt down every last gem, backtracking is kept to a minimum partly due to a sensible warp system. When you progress far enough in one area, you’ll usually open up a warp back to a special room in the home base. You can use this room to quickly travel around the places you’ve been. There’s also a pretty cheap consumable item in the shop that lets you jump back home instantly if you use it. They’re easy to stock up on, along with the health potions sold there. You’ll want to buy as many of both as you can whenever you’re back at home base.

Most of the enemies you beat will drop gems. Since enemies respawn every time you leave a room and come back, you’ll end up with quite the little collection when things are going smoothly. The shop has a small selection of items, and while you’ll want to invest in the permanent upgrade that is the shield as soon as possible, buying keys only serves to break the game. That leaves health potions and warp items, both inexpensive and stackable. Even with the limited ways you can use your cash, you’ll probably find yourself broke a lot of the time. Whenever your character runs out of health in Destiny Emerald, you’re booted back to your last checkpoint with half of your money taken away. Run into a particularly tricky stretch and you’ll likely be down to nothing in no time at all. As such, it’s not really worth seeking out the hidden treasures until you’ve got a dungeon section mostly cleared, lest you lose it all before you even get back home to spend it. Like I said, buy up consumables at every chance. The 30 gems you’ll blow on a health potion will almost certainly save you at least that much, along with mitigating some of the frustration of the game’s more difficult stretches. 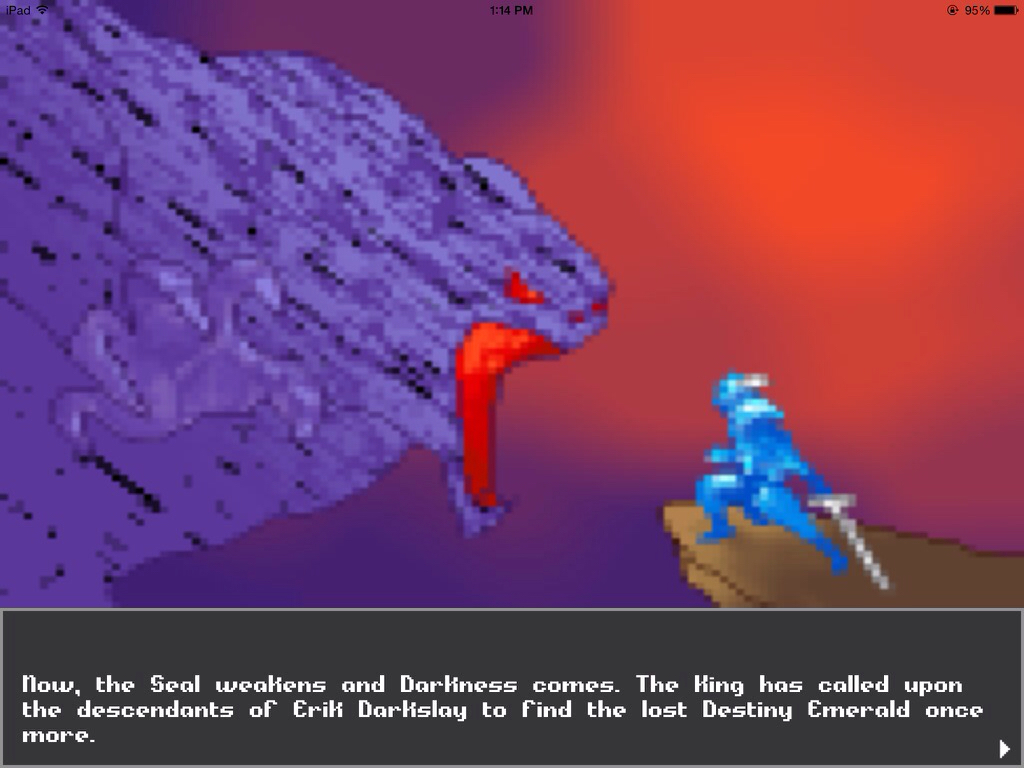 A lot of that frustration is by design. Destiny Emerald is obviously intended to be a tough game, just as the original Legend Of Zelda could be at times. Unfortunately, there’s one way this game doesn’t follow the script, and it’s to its detriment. If you ask me what the difference is between good so-called “NES-hard" games and exasperating ones, it generally comes down to collision detection and the presence of a good invincibility window after taking a hit. Destiny Emerald doesn’t have awful collision detection, but it’s off enough to cause some weird hits at times. Worse, there’s almost no escaping a second, third, or fourth hit if the enemy keeps moving in your direction. Your character’s invincibility window is too short to get away most of the time, making it easy for a single mistake to result in massive damage. It can happen so quickly you might not even have a chance to reach for a health potion. I hope you weren’t hoarding any cash.

Adding to this problem, enemies that take multiple hits seem to have an odd bug associated with them. At least on my iPad 4, sticking my weapon into them causes the game to temporarily freeze up, giving the enemy a chance to hit me while the display catches up. You know who can take multiple hits? Every last one of the bosses. And if you lose to a boss, it’s all the way back to the start of that dungeon section. From the looks of things, the developer is aware of this bug, so it will hopefully be fixed soon. At the moment though, it’s something of a problem from the beginning of the game and only gets worse the farther in you go. The enemies in this game can be pretty tough, with unpredictable patterns and mixed groups that conspire to box you in. They only get stronger and faster as you play, and the last thing you need is for technical problems to make things tougher on you.

If you’re a fan of games like the original Zelda, these issues probably aren’t going to be enough to ruin Destiny Emerald for you. They will, however, make certain parts of the game incredibly unpleasant, and it’s too bad because when things are going as they should, the game is quite fun. There’s a good balance between combat and puzzles, the boss battles are tense and exciting, and the multiple playable characters helps to keep things fresh. When you’re using a character with a ranged weapon and therefore don’t have to deal quite so frequently with the collision issues, the controls work satisfactorily. You’ll occasionally get a stuck input that will send your character running in one direction or temporarily short out your attack button, but I assume that’s connected with the lag problems I detailed in the previous paragraph. 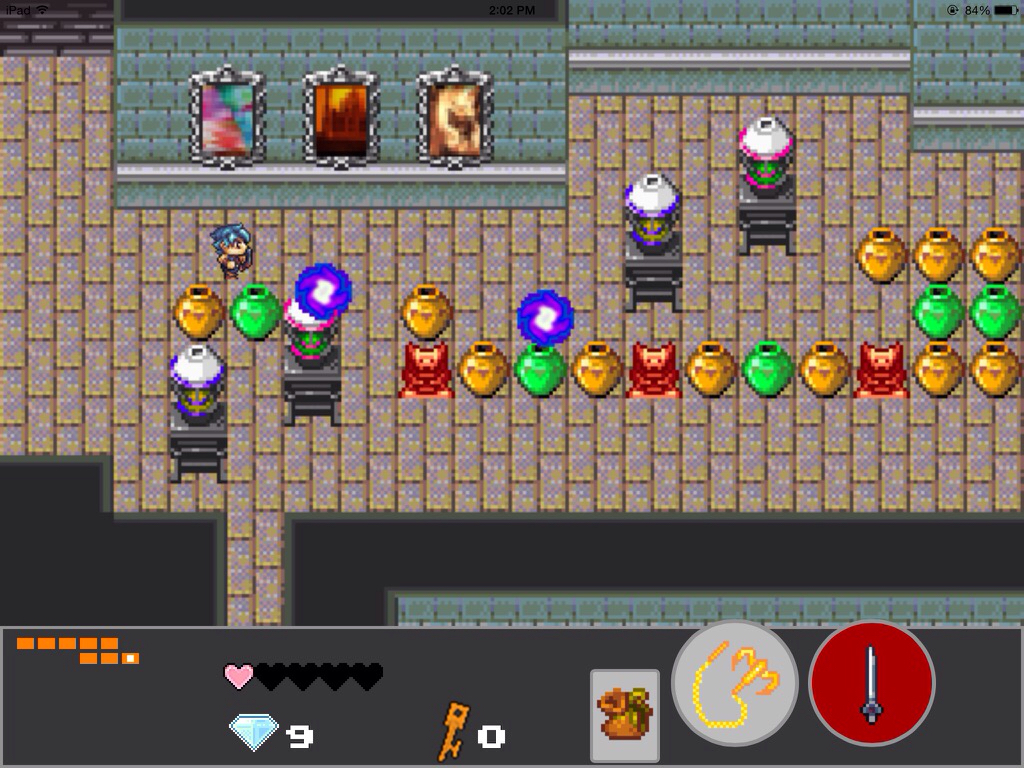 The presentation has its ups and downs. I think the visual design in general is quite nice, with a fairly authentic 16-bit feeling to the proceedings. There’s a surprising amount of variety to the various locations you’ll run through, and although the game is obviously relying on tiles to get most of the work done, there are certain rooms that get more specific detail. The audio doesn’t step up to that level, unfortunately. The sound effects are a bit too subdued, and the music is just okay. Certainly nothing here that will get stuck in your head, but it’s appropriate to the theme and doesn’t get on the nerves, so I suppose that’s something. There aren’t any options to speak of, but the user interface works pretty well as it is. There’s a mini-map visible on-screen at all times, and the inventory menu is easy both to understand and use. In case it’s important to you, I should also mention that there isn’t any IAP in the game.

If the developer can fix the technical problems Destiny Emerald suffers from, I think this game could do a great job of scratching the mobile Zelda itch. In its current state, however, it’s a much harder recommendation. There’s quality in here, but you’ll have to suffer some heavy irritations to enjoy it. If nothing else, I appreciate how far it goes towards realizing its lofty ambitions, I just wish the whole thing didn’t feel like it was going to come apart at the seams at any moment.