One of the (many) awesome things about working with indie developers is just how open they are with their creative process, compared to the closed door meetings protected by layers of NDA’s and publisher agreements when it comes to anything in the AAA world. 10000000 ($2.99) is still one of my favorite games, as evident by our five star review and we’re super stoked for the upcoming You Must Build a Boat which we did a hands on preview not long ago. I’m not the only one wild about the game: 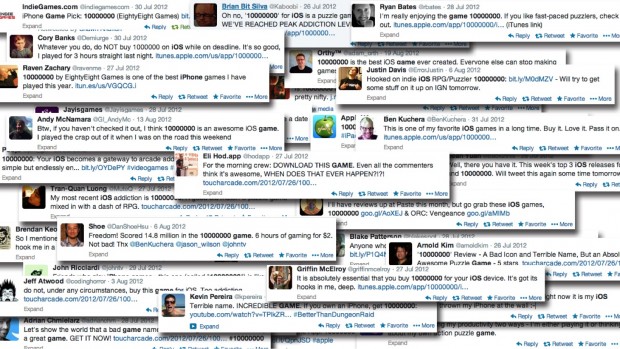 Most of what eventually turned into 10000000 was scrawled out in a notebook of Luca Redwood’s. I saw a tease of this on Twitter, thought it was super interesting, and asked him to scan more of the pages to share with other fans of 10000000, so strap in for tons of images: 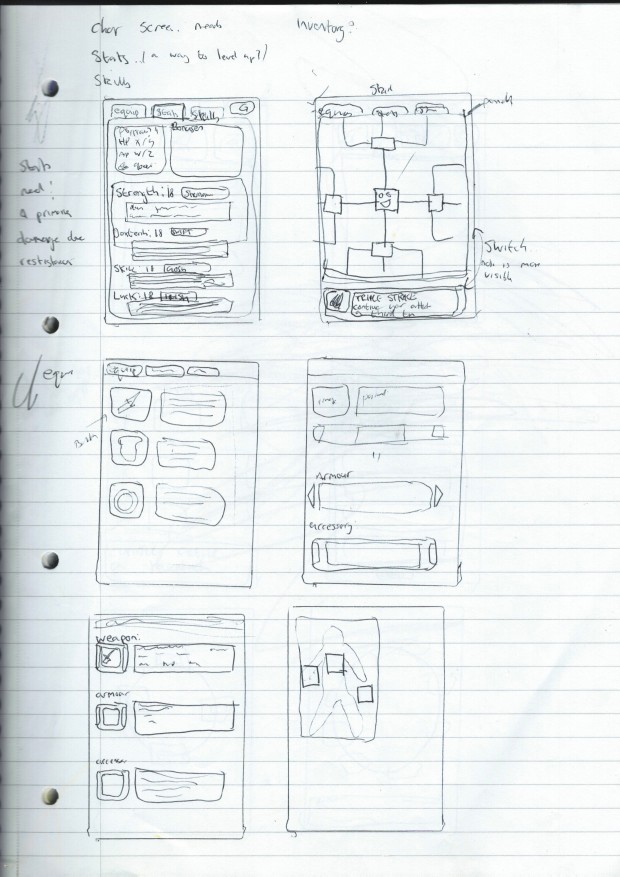 According to Luca, “The game started not as a matching game at all, Instead, in kind of a a fruit-ninja style, you could swipe a group of monster to chop them in half. This was a more strategic, thoughtful game in which you’d use your skills at the right time to avoid being beaten." 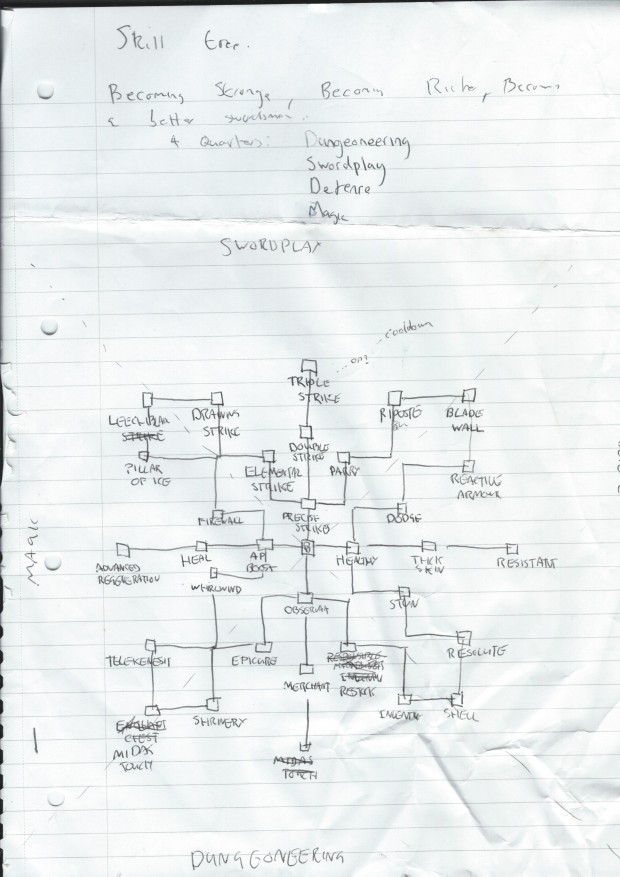 Here’s a couple of the earliest screenshots: 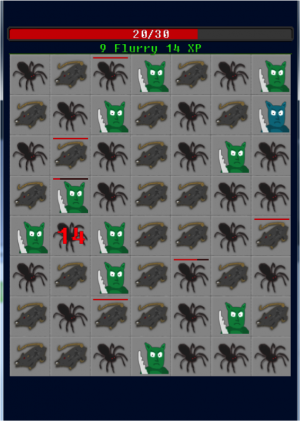 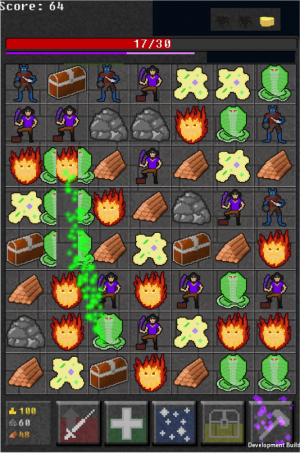 The game always had an idea of an overworld you could buy upgrades, although it started as a much happier place than the castle of 10000000: 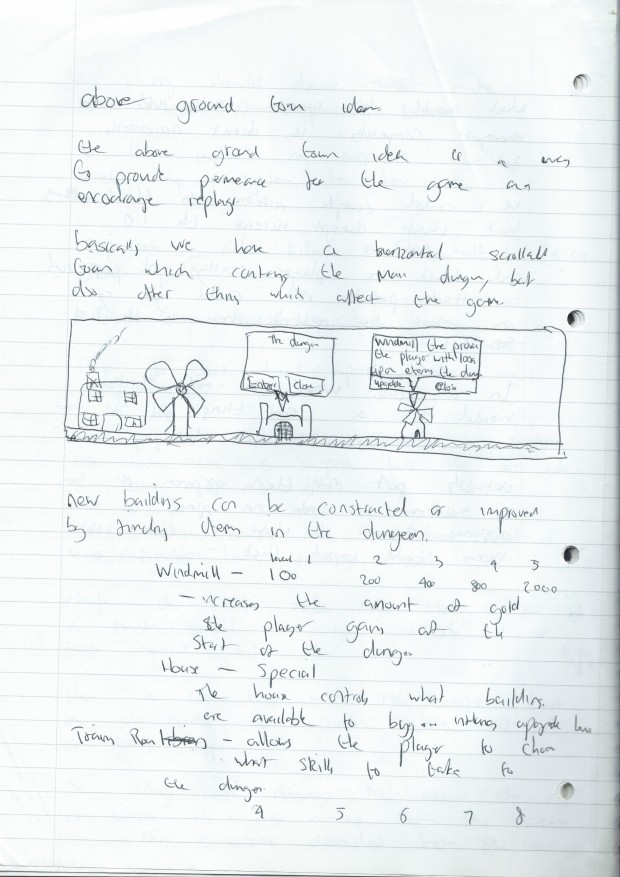 Transcript of the text on this note:

basically, we have a horizontal scrollable town which contains the main dungeon, but also other things which affect the game 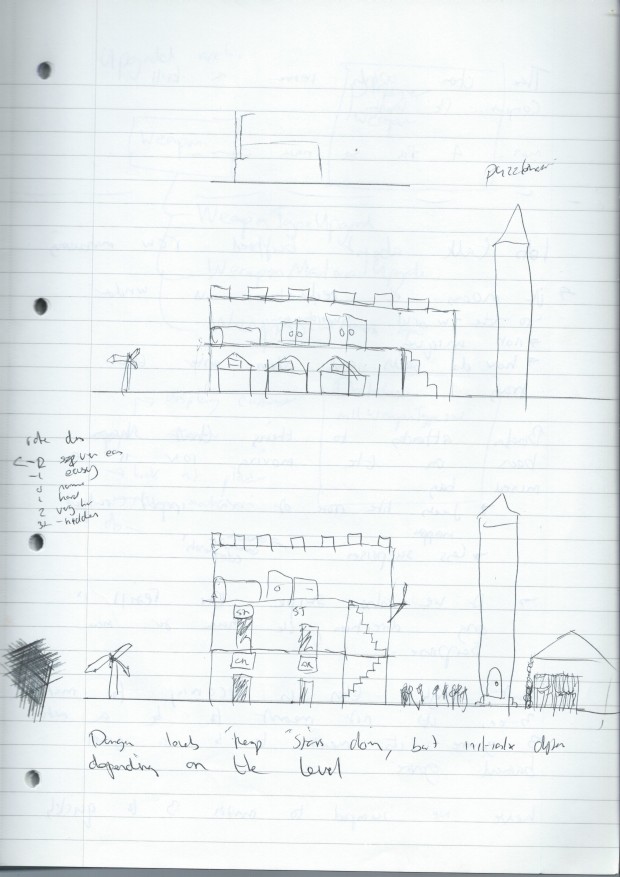 The writing, in case you can’t read it:

…And here’s a (comparatively very bright and cheery) initial screenshot of what this all looked like in game: 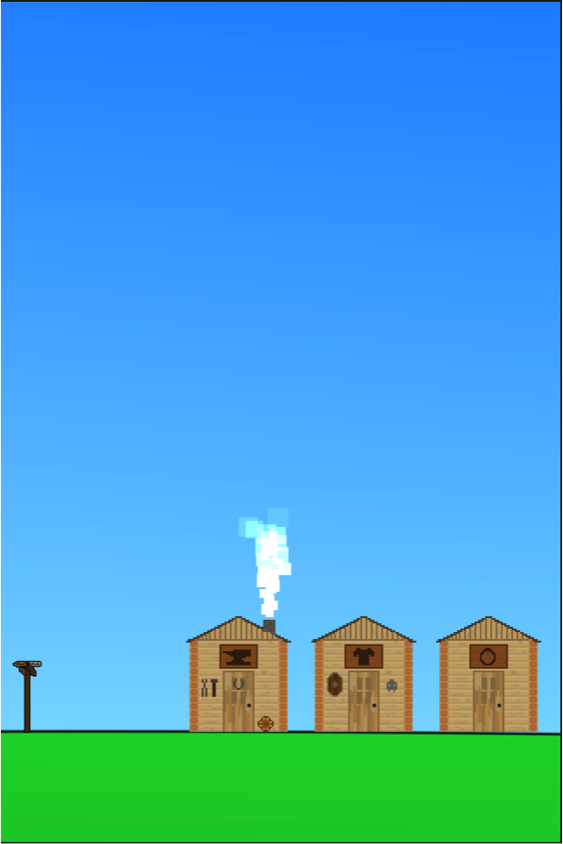 Luca mentions that shifting the focus of the game from a happy town to going underground was a massive turning point for the game, at which point things start to look much more familiar. The following pages represent some of the most significant changes to the game which evolved Luca’s original concept into 10000000. He also mentions that while he liked the simplicity of having to score 10,000,000 points- He didn’t know why yet. Again, each image is accompanied by a transcript of the handwriting. 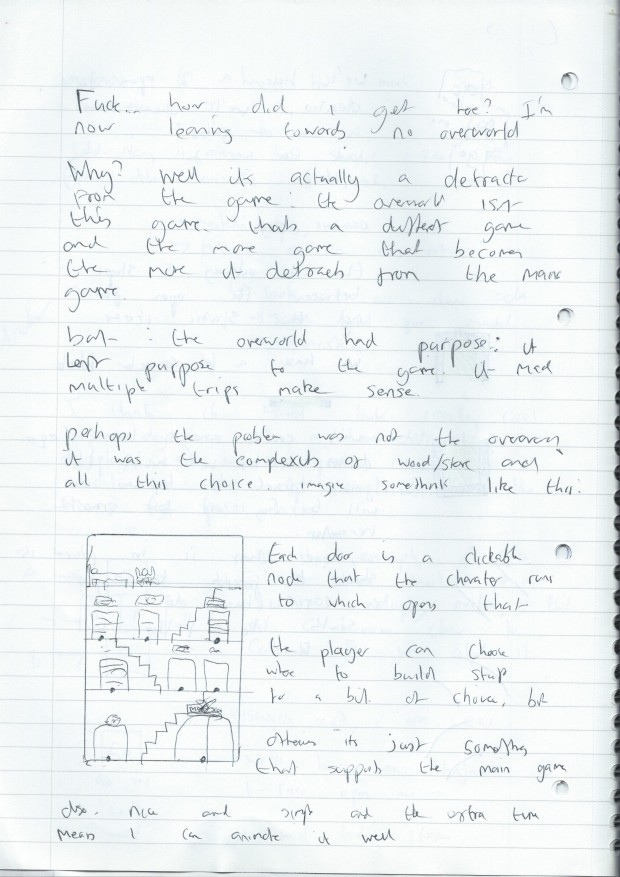 F*ck… how did i get here? I’m now leaning towards no overworld

Why? Well its actually a detractor from teh game. the overworld isnt this game, thats a different game and the more game that becomes the more it detracts from the main game.

But the overworld had a purpose: it lent purpose to the game, it made multiple trips make sense

perhaps the problem was not a the overarching it was the complexity of the wood/stone adn all this choice…. imagine something like this:

Each door is a clickable node that hte charactr runs through which opens that.

the player canchoose what to build, stuff for a bit of choice

other is just somethng that supports the main game

also, nice and simple and the extra time means i can animate it well 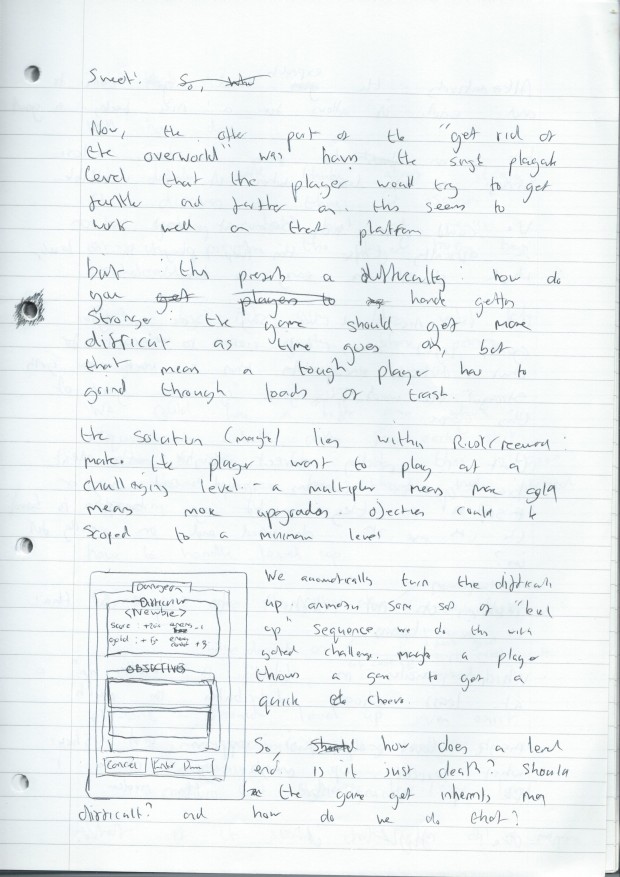 Now, the other part of the “get rid of the overworld" was having a single playable level that the player would try to get further and further and this seems to work well on that platform

but this presents a difficulty: how do you handle getting stronger: the game should get more difficult as time goes on but this means that a tough player has to grind through loads of trash

the solution (maybe) lies within Risk/Reward. Make the player want to play at a challenging level – a multiplier means more gold, more upgrades, objectives could be scoped to a minimum level. we automatically turn the difficulty up animate some sort of “level up" sequence. we do this with gated challenge. maybe a player throws a game to get a quick cheevs [achievement]

so how does that all end? is it just death? should the game get infinitely more difficult? how do we do that? 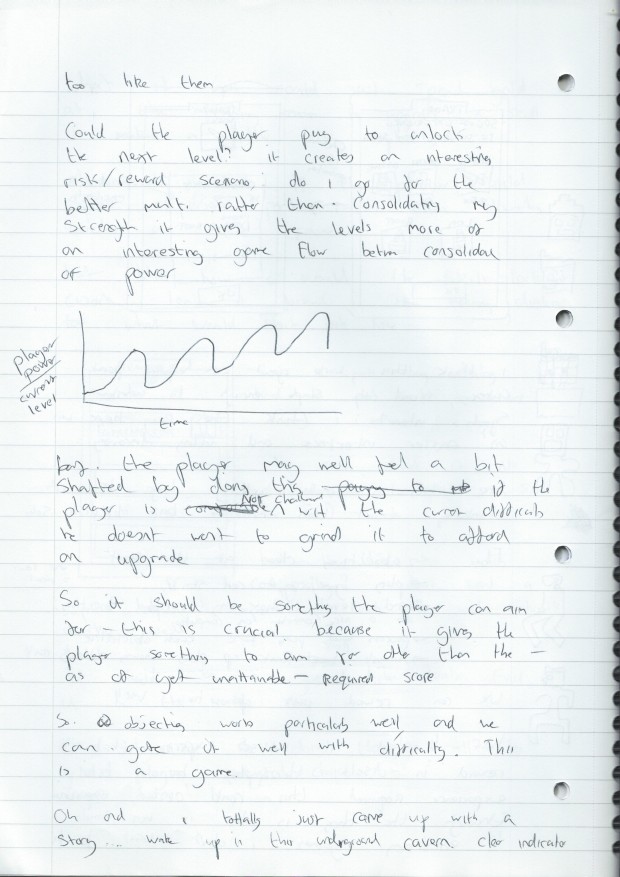 Could the player pay [in-game currency] to unlock the next level. It creates an interesting risk/reward scenario: do i go for the better multi rather than consolidating my strength it gives the level more of an interesting game flow between consolidation of power.

but the player may well feel a bit shafted by doing this. if the player is not challenged with the current difficulty he doesn’t want to grind it to afford an upgrade

So objectives works particularly well and we can get it well with difficulty. This is a game.

Oh and i totally just came up with a story… wake up in this underground cavern, clear indicator… 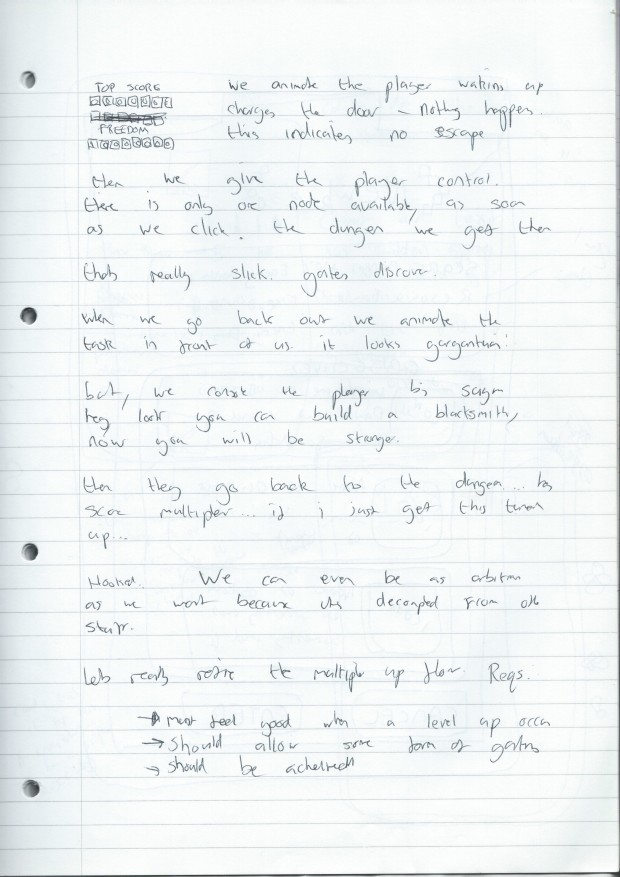 … we animating the player waking up, charges the door, nothing happens, this indicated no escape.

then we give the player control ther eis only one node available as soon as we click, the dungeon we get them [?]

when we go back out we animating the task in front of us, it looks gargantuan

but, we console the player by saying, you can build a blacksmith, now you will be stronger.

then they go back to the dungeon …the score multiplier…. if i just get them tuned up…..

At this point the main game was still based on the monsters on a grid setup from the above screenshots, with sliding tiles as the gameplay mechanic. Luca mentions he didn’t set out to make a matching game, but it felt so much better as a matching game that in his words, “it would be stupid," to not pursue that directions.

As the game continued to evolve, monsters switched from being on the grid to the corridor we’re familiar with in 10000000, but the question still remained of how you’d actually kill them. Initially, you’d match “contracts" to deal with the them which worked great as you could encounter anything and by matching different colors you’d be able to get passed it. The problem was, this all felt incredibly disconnected between matching colored tiles which caused your in-game character to attack while matching swords resulted in you as the player attacking.

Another concept that came about was some kind of energy or inertia bar. It’s increase as you ran, and decreased when you got hit. Luca says this “kind of made sense," but adding one more thing for the player to keep track of while playing seemed like it was too much. What ended up happening from there, was the 10000000 mechanic of just getting knocked off the screen. He wasn’t ever able to explain why the world worked that way, but just doubled down on it regardless. 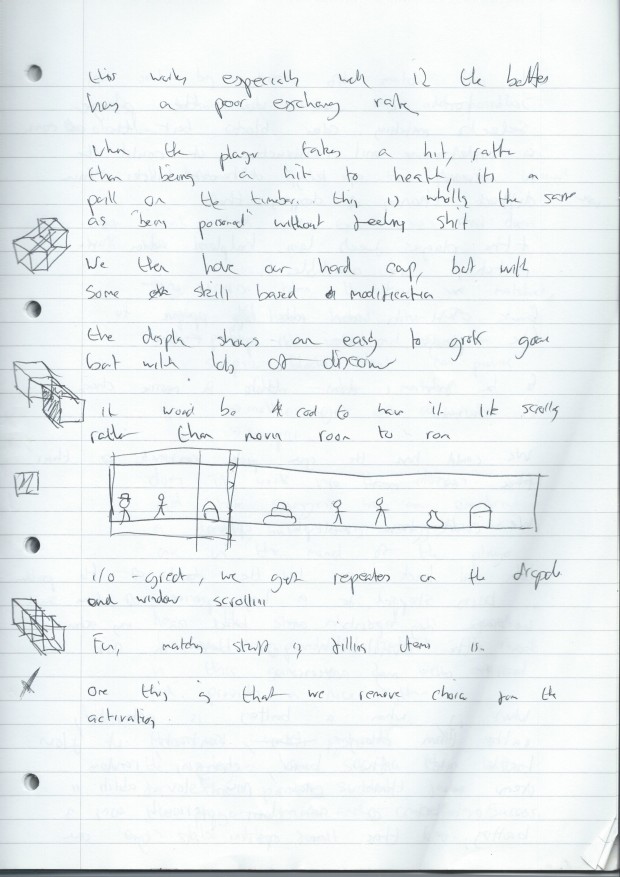 When the player take a hit, rather than being a hit to health it’s a pull on the timebar, this is wholly the same as “being poisoned" without feeling shit.

We then have a hard cap, but with some skill based modification

the display shows an easy to grok bit with lots of [color?]

it would be cool to have it scrolling rather than moving form room to room.

one thing is that we remove the choice from the activation

From there, the game gained the obstacle types that we all know and love: 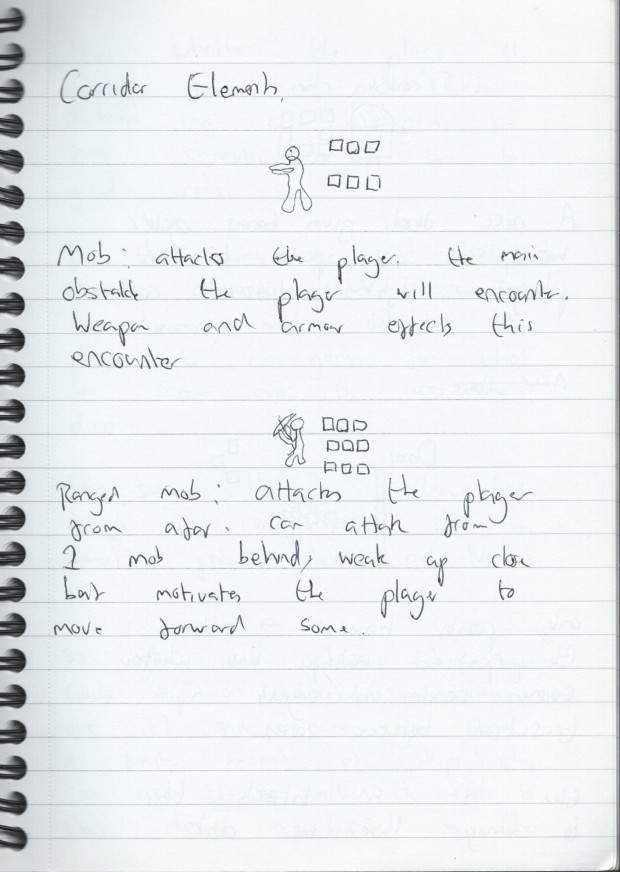 Mob: attacks the player, the main obstacle the player will encounter. Weapon and armor effects this encounter.

Ranged mob: attacks the player from afar. can attack from 1 mob behind, weak up close but motivates the player to move forward some. 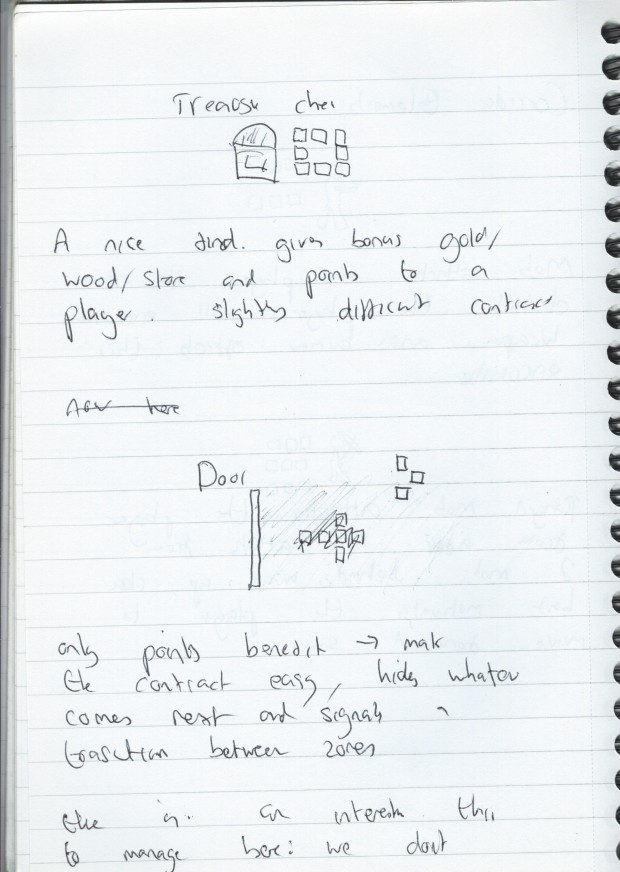 only points benefit -> make the contract easy, hides whatever comes next and signals a transition between zones.

Once again, the actual in-game screenshots evolved with these new gameplay elements. In the below series you see the game transition from the colored contracts, to something that looks more similar with monsters on the game board, to what is reminiscent of the actual 10000000 release. 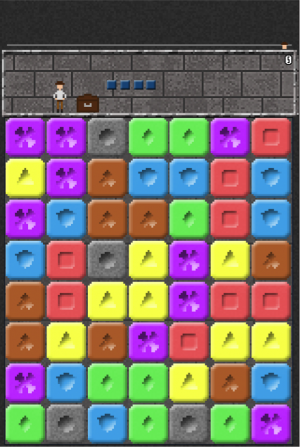 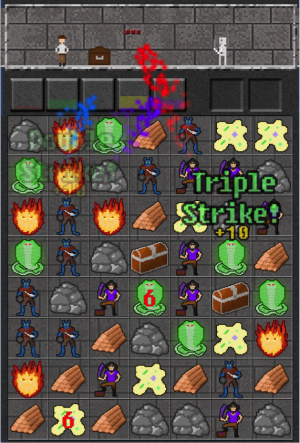 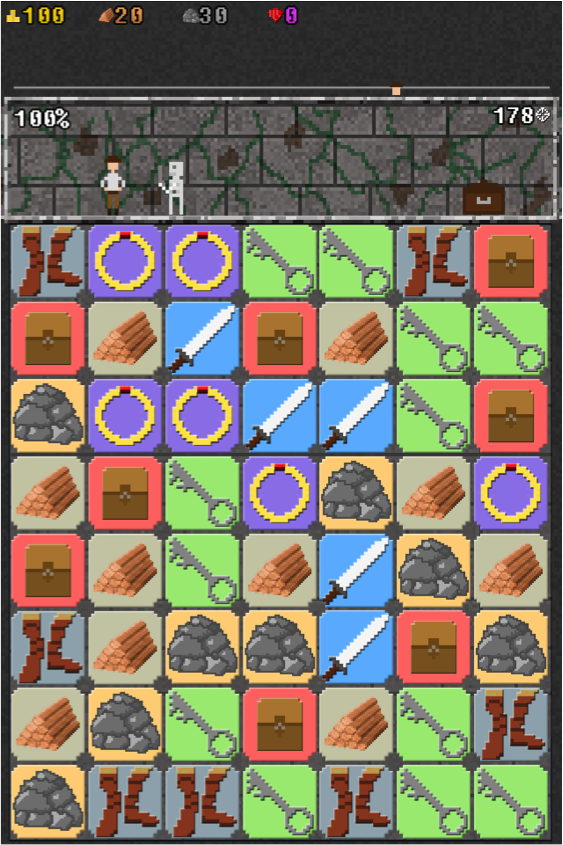 It’s absolutely fascinating to see how 10000000 evolved throughout its lifecycle. We see similar things with all sorts of indie games. One of my favorite videos we’ve ever shot was Imangi’s Keith Shepherd walking us through Temple Run prototypes, which has a very similar feeling of starting as something really different, with a core mechanic that was iterated on to get the end result.

Oh, and if for some insane reason you haven’t downloaded it yet, you should really give 10000000 a try.