Last week we offered a glimpse into the strange world of Star Wars: Card Trader (Free), a card collector app presented by Topps that consists entirely of digital Star Wars cards. Part of the strangeness with this app has to do with the fact that there are no gameplay elements at all. In fact, the whole allure Card Trader centers around purchasing card packs (typically with IAP) and trading cards amongst the community to collect sets. It’s a fascinating game that’s managed to cultivate a community willing to pay good money of digital versions of what used to be actual trading cards.

This week, we received word of an example showing just how crazy this community can get. A recent eBay listing shows a buyer spending $170 on a “Vintage Han Solo” card that had a maximum print of 1,500 (and basically sold out instantly). We’ve see collections of cards go for several hundreds of dollars but this is certainly the highest price we’ve seen paid for a single card within the App. 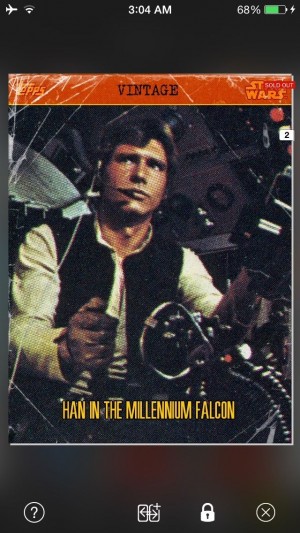 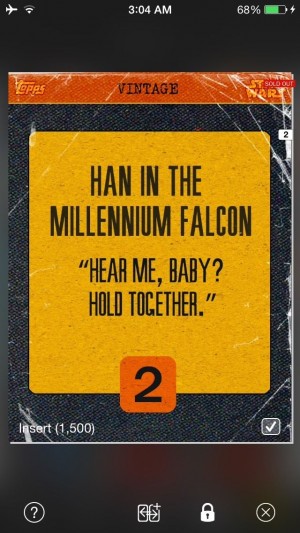 The real bizarre thing is if you look at the image of the card itself, you’ll see that it looks bent, very worn and crumpled – all qualities that would make the card significantly lose value if it was sold as a physical object. However, the nature of it being a digital item means that scarcity is the primary driver for price and Topps can basically do whatever they want in terms of the image.

Speaking of scarcity, Card Trader also recently released new “Mint Press” cards. Like other types of cards, Mint Press editions also come in different rarities, with the most rare being the Black mint, which will only have 50 total printed. Considering the Vintage Han’s printing of 1,500, one can only imagine the Mint Press cards may sell for even higher.

Star Wars Card Trader is available for free on the App Store in case you want to get in on the rare card lottery. Otherwise, feel free to check out our hands-on impressions that we’ve previously posted if you’re curious.