We’ve seen more than our fair share of CCG games on the App Store, with the majority of them falling squarely within the Freemium genre. However, Star Wars Card Trader (Free) presented by Topps is probably one of the more unique takes on that type of game (for better or worse).

Mimicking the olden days when we’d just by packs of cards for the purposes of collection, Card Trader is an incredibly simple game in theory. Players can purchase cards packs for a randomized chance of getting a large variety of cards, with different packs telling you upfront what your chances are of scoring cards of various rarities. Packs are purchased using in-game currency that is really only earned by purchasing via IAP. An achievement system will reward minor amounts of said currency if you collect all the cards in a certain series, but otherwise, this is purely a game of shelling out real money, buying cards, and hoping for the best. 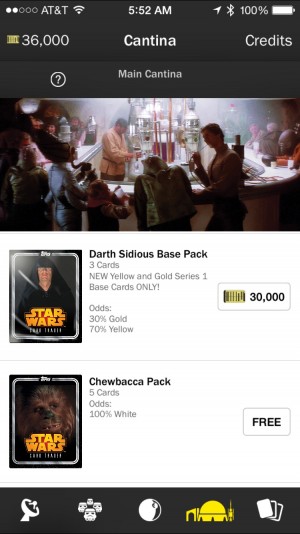 The one exception to earning cards is in the game’s pretty robust trading function. Once you attach and validate an email address you can go forth and trade any cards you own with any other person that plays the game. Players can view your cards at any time and offer unsolicited trades that you can choose to accept or deny. There’s a huge community available with folks amassing tons of cards purely for the purpose of trading. This was an pretty common sight as a kid growing up but it’s fascinating to watch in the digital sphere.

It’s hard to classify Star Wars Card Trader because it really is a throw-back to that time (which still exists I suppose) when we’d all beg for money to buy foil packs and hope for a rare. Card Trader takes that experience to the extreme by offering rare cards with a limited number of “printing,” forcing players to shell out IAP fast in order to buy as many card packs as possible hoping to get those rares before they go “out of print.” A marketplace outside of the game is also coming up, with players spending lots of money on sites like eBay for the opportunity to get certain cards traded to them in-game.

The cynic in me looks at a game like Star Wars Card Trader as just as giant IAP ploy to extort lots of money out of the proverbial whales that play. However, the large user community combined with the high review scores in the App Store translate to a fact that not only do a lot of people play games such as this, but they actually enjoy them. The allure of collecting rare things, even if they are only in the digital plane and don’t actually translate to anything from a gameplay standpoint, exists, and Star Wars Card Trader seems to have hit that magical combination that translates to profits. Of course, the Star Wars brand and high production values don’t hurt it’s cause as well.

As you might expect, Star Wars Card Trader is available for free and you get some small amount of currency at the start in order to buy a few packs. It might be worth checking out if only to see this incredibly interesting community.