This week’s event in DeNA’s social RPG Final Fantasy: Record Keeper (Free) (which launched on Saturday night) not only offers a pretty awesome character in Final Fantasy VI’s Celes, but it also offers a first look at the third type of special event available within the game. As is custom for these events, we thought we’d take a closer look at the first of hopefully many Survival Events, provide some tips on the various bosses you may encounter, and then offer some closing comments on how best to utilize the Runic Knight as you venture into the Magitek Facility Infiltration event.

A Brief Primer on Survival Events

If you’ve been keeping tabs on all the character events hitting Record Keeper, you should be familiar with two so far: Challenge Events and Collector Events. Challenge Events are the simplest ones that simply provide rewards for linear progression through the event. Collector’s Events are long-tail events that have you replaying small events continuously in order to collect currency that can be redeemed for a wide variety of items. 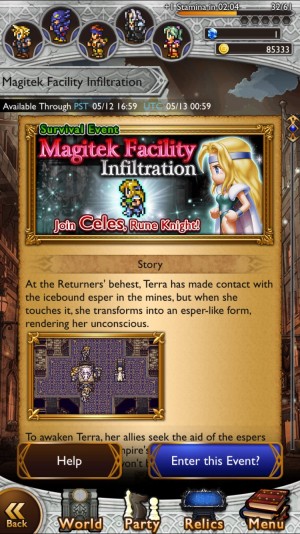 Survival Events are similar to Collector’s Events in that they are long-tail events that have you play through short collections of battles (each battle only has one round) for currency. However, they are different in a few important areas. First, you don’t actually redeem the currency (in this case, ‘Memories’) for items; instead you earn items in a linear fashion depending how much total currency you’ve amassed. Second, Survival Events reward more currency depending on how hard the enemy is that you’re fighting. Finally, you only collect the currency earned if you make it through the entire collection of battles. You can run away at any point and collect the currency accumulated but there’s always the temptation to play one more battle to get a higher multiplier. Lose a battle and you forfeit all the currency earned during that run.

There’s a few easy strategies to keep in mind when you’re playing this Survival Event. First, regardless of your strength, start with the Easy difficulty and work your way up — you still earn rewards for clearing each difficulty (including precious Mythril). This also lets you gauge how well you can survive in each difficulty. In general, if you have you have a party with an average level of 25 and above with a fair collection of 4/5 star weapons and armor, you should have no problem with the Easy and Normal difficulties and should be able to survive the Hard difficulty as long as you pay attention to the battles and heal when necessary. Once you get to the late game on the Hard difficulty it’s really about making sure you have all the tools necessary to take them out. Thankfully, we have some tips to take care of that.

Before we get started, keep in mind that the following boss tips are with the Hard Difficulty in mind. In practice, you can translate them to the easier difficulties but most players really shouldn’t have trouble with these folks on easier modes.

Ifrit and Shiva – This battle is similar to the Final Fantasy VI battle in that each Esper will take one turn and disappears, with the other coming up to bat. Thus, it’s imperative to make sure that you time your attacks right on the proper Esper, else you launch something that does assists instead of harming the enemy. With that said, when Ifrit is on, Ice is the only vulnerable element against him (Fire Absorbs) and with Shiva, Fire is the only vulnerable elements against her (Ice absorbs). All other elements are resisted so stick to those two and make sure your timing is correct. 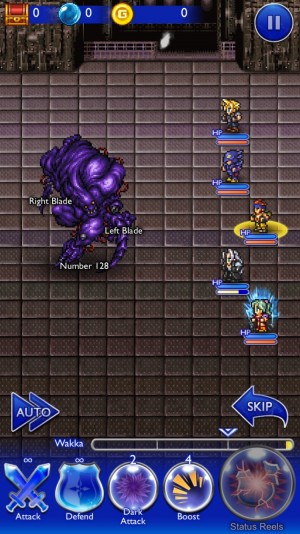 Number 024 – This boss starts out with no vulnerabilities but after a few turns he will execute Barrier Shift, which changes his move set and elemental vulnerability. You can tell what vulnerability he has based on the moves he uses. For example, if he uses Blizzard, launch fire attacks and if he uses Earth attacks, cast Wind spells (and so on). Pay attention if he starts casting cure spells on himself as that means he’s vulnerable to Poison. Otherwise, just keep dealing damage and he’ll eventually go down.

Number 128 – This boss is pretty hellish on the hardest difficulty. There are three parts to the boss, the Body, Right Blade and Left Blade. All of them do damage but the Right and Left Blades do a bit more damage than the Body. One strategy is to take out the Blades to diminish the damage but they eventually regenerate with time and you really don’t have a decent amount of time to do Body damage before they do come back. The consensus is to come in, focus all your damage on the Body and try weather the storm from the Blades. Just don’t use any Ice based attacks as Number 128 absorbs all that damage.

A Quick Look at Celes

After a few complete runs, you’ll finally earn enough Memories to unlock Celes. So now that she’s at your disposal, how should you use her?

From an equipment standpoint, Celes specializes in Daggers and Swords and can use Hats, Helms, Light Armor, Robes and Bracers. Thus, Celes is in an interesting situation because the majority of her weapons can’t really augment her magic skills, but with the right armor she can at least enjoy some potency on the magic side. However, she can only use two star Black and White magi so she’ll never have access to powerful magic like some of the other mages. Her default Soul Break is also interesting as it focuses on the team augmentation by raising the party’s Resistance stat for a short time.

Considering her decent attack stats in the end-game, it’s best to treat Celes as a warrior and equip her with Spellblade abilities (she can use them all) and potentially have a Cure ability if necessary. You can basically use her in a similar vein as Cloud, but I found him to be a bit more powerful in my view. However, Celes can make a good Cloud replacement regardless if he’s not your cup of tea.

Magitek Facility Infiltration is available until May 12th so if you’re thinking about picking up Celes I’d suggest getting started soon. Otherwise, stay tuned as we keep tabs on the next Record Keeper event to hit the game.