As a longtime fan of gamebooks and interactive fiction in general, I’ve enjoyed seeing the genre blossom on iOS, especially within the last few years. What’s especially great about it is that it hasn’t simply been the work of any one developer. The genre is far stronger for having a variety of voices like inkle, Tin Man Games, Forge Reply, and Cubus Games each doing their own thing. A lot of people who probably haven’t picked up a physical gamebook since elementary school are enjoying the feast of choices we have available to us on our mobile devices. Each push of boundaries for the genre seems to widen the audience even more. A lot of the recent hits have focused on playing with the presentation or the freedom to move away from the traditional structure adopted from paper books. The monochrome sketches of Lone Wolf (Free) coming to life, the simple yet striking imagery of 80 Days ($4.99), the hilarious Kate Beaton sketches of Hamlet and company in Ryan North’s To Be Or Not To Be ($6.99), or even the rocking soundtrack of Heavy Metal Thunder ($3.99) are all signs of a genre that is casting off the limitations of the past and charging into its own unwritten future. 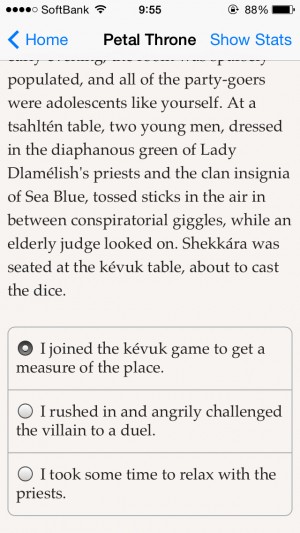 Exciting as all of that is, it’s easy to forget that the foundation of the genre is in the writing. It’s neither as sweet and eye-catching as the frosting nor as thrilling as the sprinkles, but the cake itself has to pass the taste test. You can hide bad cake with a ton of sweet toppings, but in the end, only kids will be able to digest it without getting sick. Choice Of Games, one of the more prolific gamebook publishers around, are not big on toppings. They make a fine castella and they appear to be okay with that. You won’t get any fancy animations, music, or text effects in their games. You generally won’t even get another picture after you’ve passed the title screen. No, it’s just words on a page, the writer’s imagination and yours working together to create just about everything. Well, words on a page and some Game Center achievements. They’re not animals.

While it may seem a bit plain at first glance, there are certainly advantages to this approach. It obviously keeps costs down and probably helps the developer keep up the release pace, but it also allows them a lot of freedom that gamebooks with higher production values might not offer. They can take chances with their story ideas more easily, for example, because they don’t actually have to visualize everything. And indeed, Choice Of Games takes quite a few chances. Their line-up has offerings in the usual horror, fantasy, and sci-fi settings, of course. Their library also includes martial arts, mechas, romances, superheroes, intriguing works of philosophy, and even a cheeky comedy or two. Their latest release, Choice Of The Petal Throne ($3.99), is set in the world of Tekumel, a setting that might be familiar to anyone who was heavily into pen and paper RPGs back in TSR’s glory days. It’s an interesting fusion of South American, Middle Eastern, and Indian culture, with a dash of sci-fi thrown in for good measure. 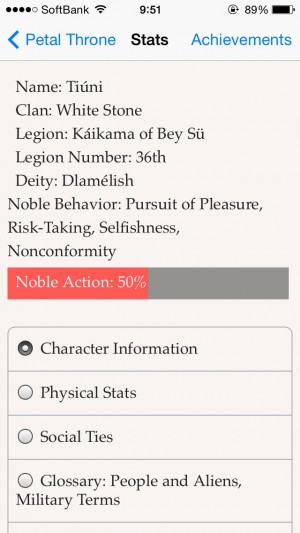 Tekumel’s roots go all the way back to the 1940s, and its creator M. A. R. Barker was almost as meticulous in his process as J. R. R. Tolkein. Simply put, there’s a lot to digest in this world, and its rich detail and unusual atmosphere make a great backdrop for adventure. In spite of its age and the clear dedication of its fans, however, Tekumel is not exactly a household name. The challenge for Choice Of The Petal Throne, then, is to introduce the player to this world without overwhelming them. In that task, it succeeds in some ways and fails in others. The early part of the game, focused on your character’s past and how they came to be where they are, works very well. It’s dealing with themes that are fairly universal, so all of the extra jargon and cultural differences are pretty easy to parse. Towards the end of this bit the game starts to lay out its overarching plot, and that’s where things get sticky.

There’s a whole political mess going on in the background, and your character is unfortunately privy to too little of it to really care about its outcome. That’s bad because the last two thirds of the story swing around that plot, and the lack of investment I felt by the end made the big choices feel less weighty than they should have. The story also has a penchant for skipping past big chunks of time, which is a good approach for your character’s younger years, but less welcome after that. It’s hard enough to follow what’s going on without having to fill in gaps. You jump from a huge battle to a weird dungeon-crawling segment for the finale, and depending on how you got there that’s either going to be an anti-climax or a bizarre turn. It’s not surprising the narrative feels incomplete, given that Petal Throne isn’t quite as big as many of the other games from Choice Of Games. Many aspects of the story feel like they need more meat, something that might have helped the overall plot from feeling as disjointed as it does. 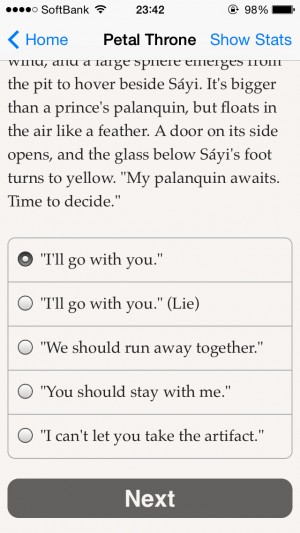 That said, when it comes to gamebooks, faults in the story can often be covered for by giving the player interesting choices along the way. In that respect, Choice Of The Petal Throne works a lot better. Your first decision is to choose which of the several gods you want to worship. That will determine the clan you belong to, along with the kind of character you should be role-playing. Some gods favor frivolity, while others give you points for being a contrarian jerk. You can always check your current status with your god of choice, though I’m not sure if it has any bearing on the actual game aside from whether you go to heaven or hell if you die along the way. As usual for this developer, there are quite a few romance options, each with the potential to have a meaningful effect on the outcome of the story. There are also points where major happenings can actually go completely differently based on your choices. If you make different choices and play to different types on additional playthroughs, you’ll find a lot of situations and choices that you didn’t even get a hint of the first time around. The achievement system provides decent incentive beyond the text itself for investigating all of these branches.

I think there’s high potential for gamebooks in the Tekumel universe, but Choice Of The Petal Throne doesn’t make the case for it as well as it needs to. I love the opening third of the game and the overall introduction to this strange fantasy world, but I didn’t enjoy the rushed feeling of the middle section and the frankly bizarre endgame. While the choices are fun to explore, with the various gods almost daring you to play outside of your comfort zone, the spotty narrative ended up undermining my care for the overall outcome. That final choice should have been a lot harder than it was, but by the end I was completely disinterested. Fans of the world of Tekumel might enjoy this one, but this isn’t one of the better gamebooks from this developer.