Minimalist platformer games have become one of my favorite unlikely genres on mobile devices. Years ago I would have scoffed the idea of running and jumping with precision on a touch-specific control scheme, but at this point, we have MFi controllers and a number of talented developers that make it work regardless. Burn it Down (Free) may not have the former convenience, but it works on multiple levels.

Kicking off with a rather odd setup, the game tasks you with finding your missing lover, who is seemingly lost inside of a giant mansion. With a black-and-white hue similar to Sometimes You Die ($1.99), your job is to jump across various pratfalls and make your way through 50 levels in roughly an hour. To do this, you’ll run from side to side by tapping each portion of the screen respectively, with the jump mechanic happening automatically. 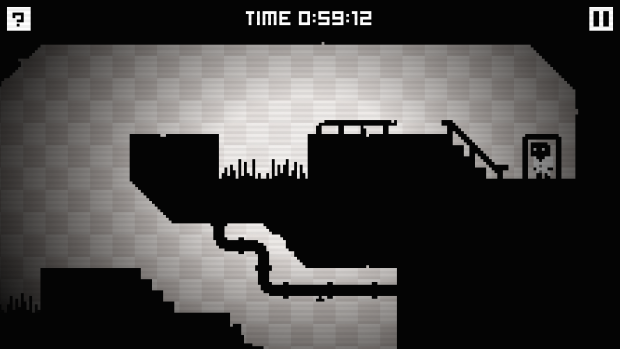 You can’t just jump at-will however, as you’ll need a certain level of speed to leap across gaps, and anything less will send you on a descent, sometimes towards a helpful ledge, and in other cases, death. It sounds limiting, but therein lies most of the challenge. You’ll have to use certain landmarks to gauge whether or not you can make certain gaps, or likewise, make the decision to leap at all.

A few stages in you’ll come across more advanced tactics like bouncing off walls to survive, and yet another choice enters your decision pool. It is a strange system to get used to, and I really wish there was an option to allow a simultaneous tap to another side to jump, but the momentum-aspect is so intrinsically linked that it would basically serve as an “easy mode." 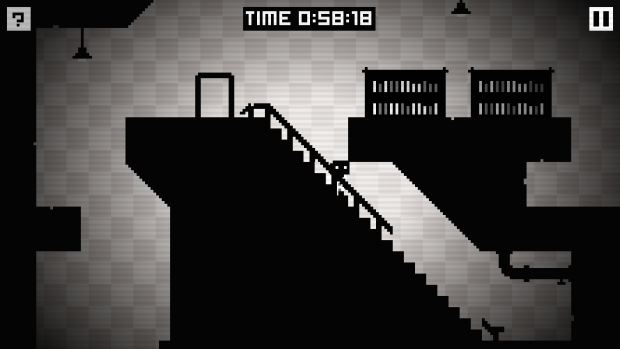 Across the game’s 50 challenges you’ll come across some throwaway levels, but all-in-all the vast majority do present interesting challenges. Levers, timed spike traps, deadly drops of acid, and Thomp-like objects that drop from the sky are all new concepts to deal with, and most platforming junkies will feel challenged at least every other level.

One of the main reasons to play is for the surreal story, telling the tale of the man’s relationship itself through various minimalist narrative elements, like running into a cat on a table or coming across an object such as a desk. You can hover over these to learn a bit more about the game’s world, but it’s never in-your-face until the ending.

While Burn it Down is free, there are a number of annoying ads in place that pop-up every few levels or so, that are unskippable. After the tenth stage I ended up paying for the $0.99 ad-removal IAP option, and didn’t regret it by the end. There’s also an off-putting “hint" system that runs you another $0.99 per three videos, but it’s more like an interactive guide, and it still forces you to actually beat the puzzle yourself.

I didn’t expect much from Burn it Down, but I ended up spending a good hour with it. There’s no option for a New Game+, but I uncovered a few more hints on my second run. Hopefully the developer will update it with more or follow it up with another tale, perhaps a flashback or with different characters, because there definitely needs to be a follow-up of some sort.