Heavy Rockets is a stylish-looking game that intrigued me when I saw the first gameplay footage, and now I’ve finally gotten my hands on a beta build. It’s a game that definitely shows some promise and some variety as both a cave shooter and a racing game. In its current form, it promises to be quite punishing, and requiring a lot of practice to do well at. There may be a few things that need tweaking to make this as fun as possible, but this is pretty interesting so far.

There are two main modes to Heavy Rockets: race mode and battle mode. Race mode has you racing around the different courses, making it from checkpoint to checkpoint. These wind around the maps, and even back through gaps you went through already. You can shoot at the other racers and take them out for a few seconds, though you have limited ammo. You also have a limited number of lives to play with, so try not to crash. I emphasize try, because you control your racer by moving the virtual joystick to thrust in that direction. These thrust mechanics, combined with the weight of your craft, take a lot of practice to try and master. Making turns without hitting the walls is an art.

The other game mode is battle mode, which in singleplayer form has you taking on endless waves of opponents, all of whom spawn from the other four spawn points on each map. There are also turrets to deal with, though you can destroy these. Battle mode is where the “2" button that you have comes in to play. This deploys your secondary weapon, the first one I got being a shotgun, which helps out a lot with taking out enemies. You can collect gems from dead enemies, which can spent on powerups and ammo refills, but these aren’t easy to collect as there’s no magnetism to pull them in. Just getting the kills is difficult enough! 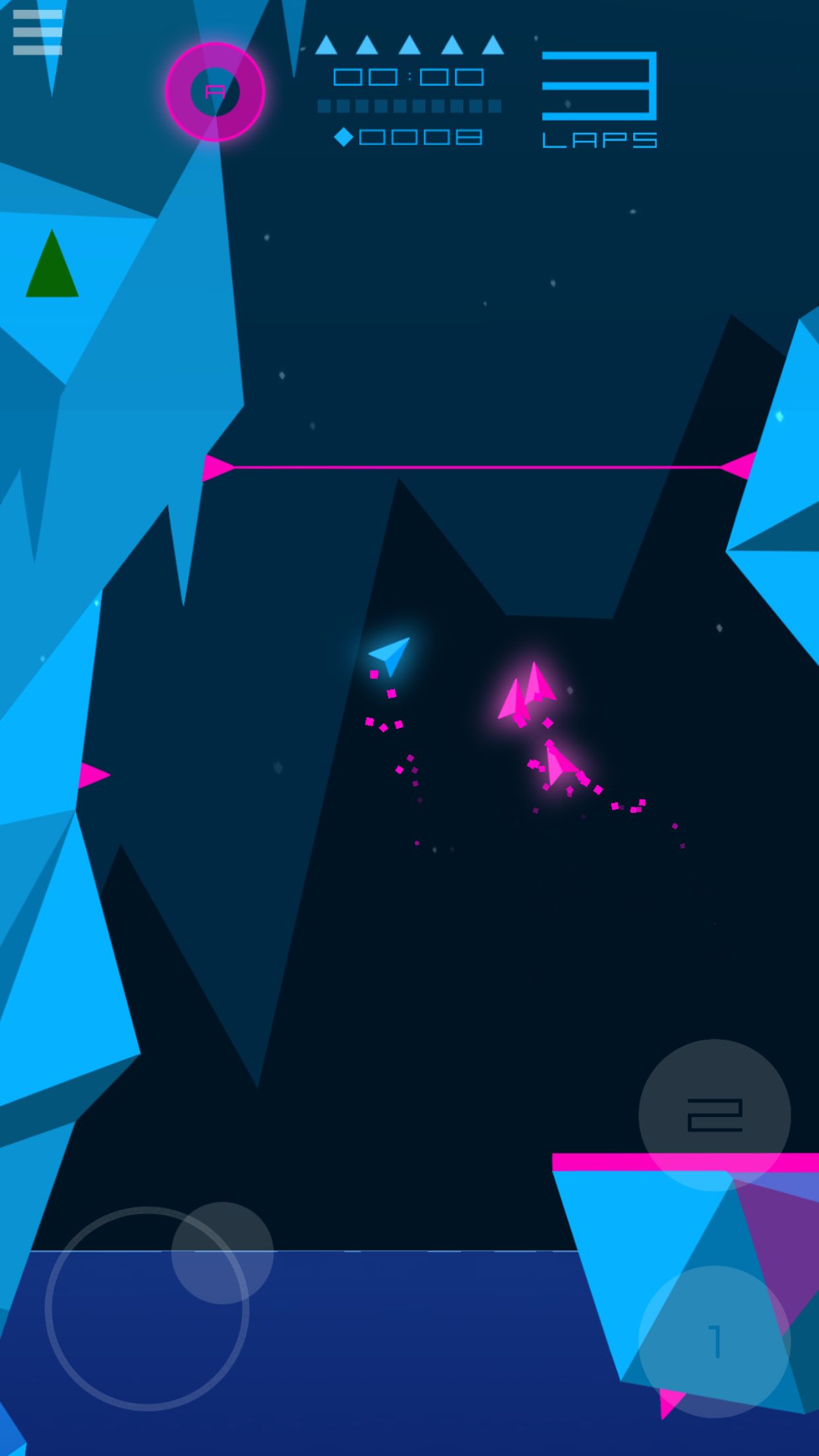 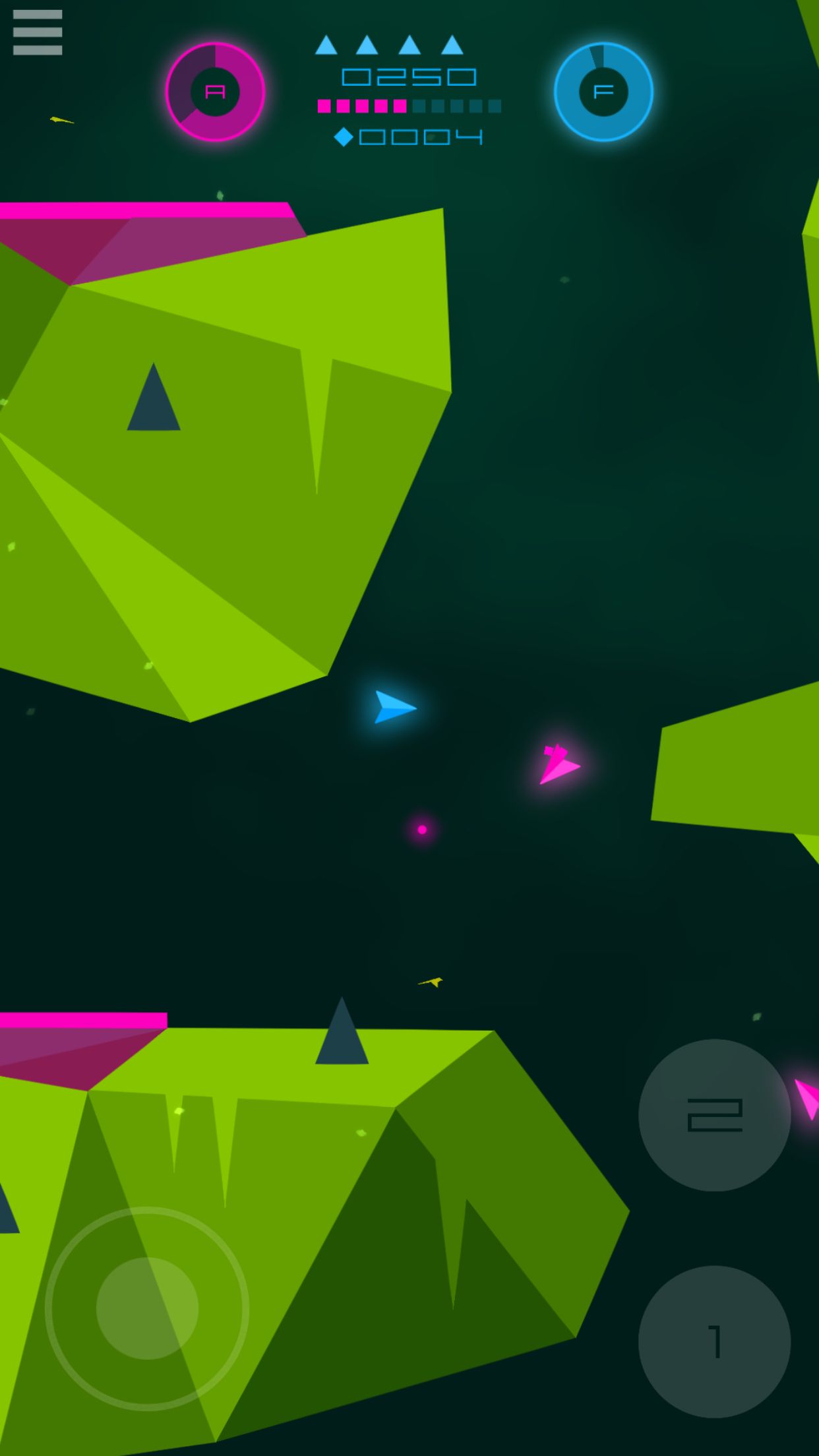 Both race and battle modes have multiplayer functionality, though I could not get these working between iOS devices at the time of this preview, it’s possible the feature isn’t implemented yet. Though there appears to be some form of Game Center implemented for high scores, I would love to see online play come into this. Multiplayer games from independent developers are always a tricky proposition, but hey, I like having the option. Though, I understand if a developer chooses to go another way.

This is definitely an early version, and there’s some things that developer Majasalmi can tweak and improve with the game, for sure. The joystick right now is kind of small, even on the iPhone 6 Plus, and I’d love to see it be bigger, so that the game feels easier to control. Landscape support would be a welcome feature, too. Gems or item prices could change, as right now they feel too difficult to earn with regularity. I’m curious to see how that whole system comes into shape over time.

Still, I find a lot intrigues me about Heavy Rockets. While the physics could change, when you start navigating those turns, it feels satisfying. And it does feel good to shoot down other racers and ships, tricky though it may be! Plus, I like the flat, neon colors being used here, and the game runs super-smooth. And it has video replays, a favorite feature of mine.

I think that Heavy Rockets has some work to be put into it to make it a really good game, but what I’ve played so far has shown that it’s quite possible that this could be a really fun final product.