Does Not Commute (Free) is a game that has looked appealing and intriguing since the day I got to see it in motion. Mediocre posted a teaser video of it, then they demoed the game to us at GDChttp://toucharcade.com/2015/03/06/gdc-2015-does-not-commute/, and it was one of my favorites there. The concept was super-fun to play with, and somehow, Does Not Commute got even better from there. The tweaked some of the things from the original GDC version, and made this an absolute must-have. 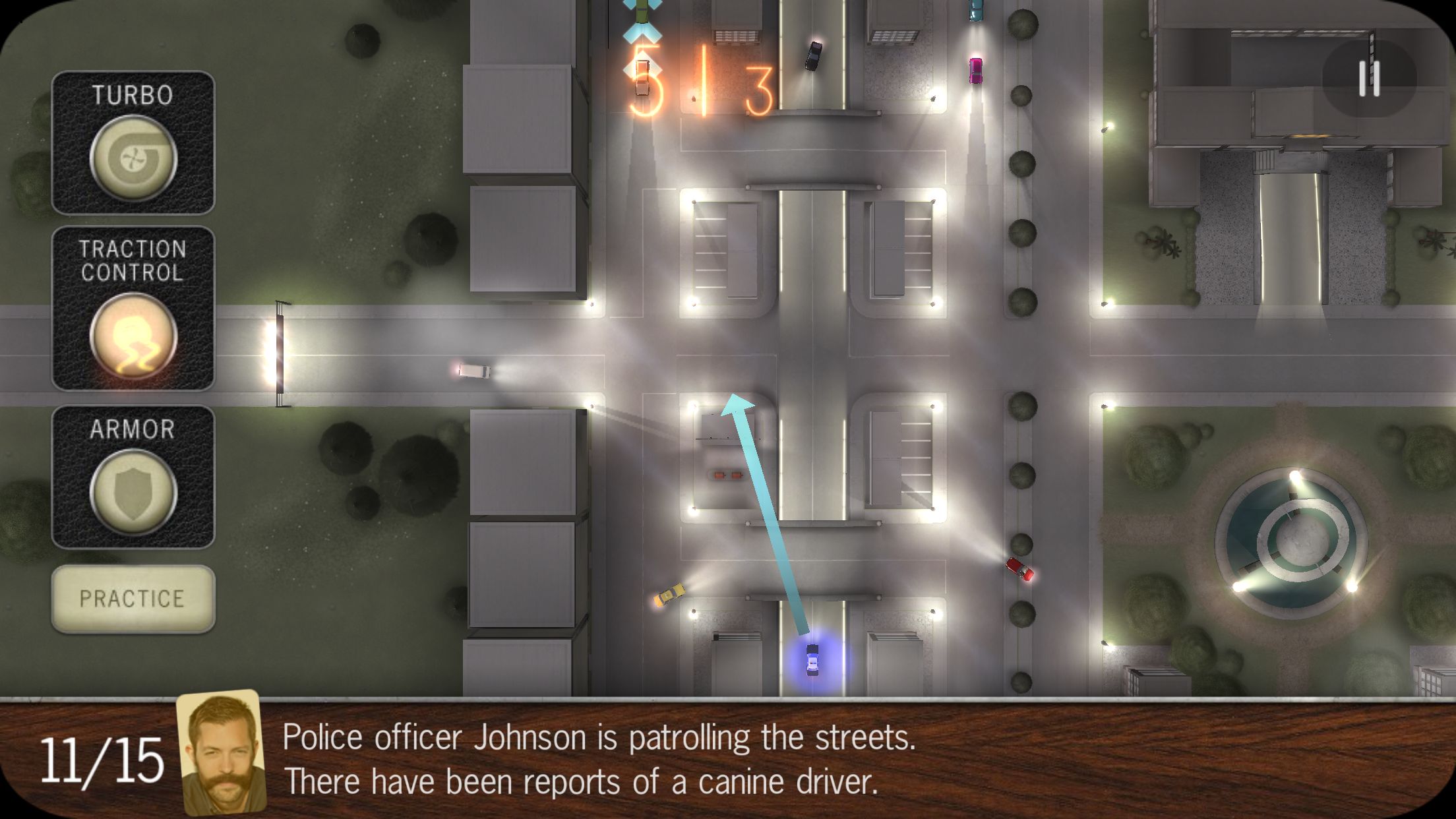 The gist of the game is that you’re driving an unstoppable car from point A to point B. The problem is that you’re then driving another car that drives in the same time frame as the first car, and you must avoid crashing into that vehicle. This keeps going and going until you have a whole chaotic traffic pattern going on, and you’re compensating for your crazy driving to get out of your own way from ten cars ago. Oh, and each car has its own weight, speed, and handling, so you have to adjust to that as well.

If you do crash, you just go slower, but you also have a time limit to deal with. You can rewind to when you started, with a one-second time penalty. To also help out, you can use one of three boosts: armor, speed, or traction. Each gives you a benefit, but also comes with its own drawback. For example, the speed boost makes your car have much worse traction. But sometimes, these boosts can help you get your car there in one piece…or in less time. 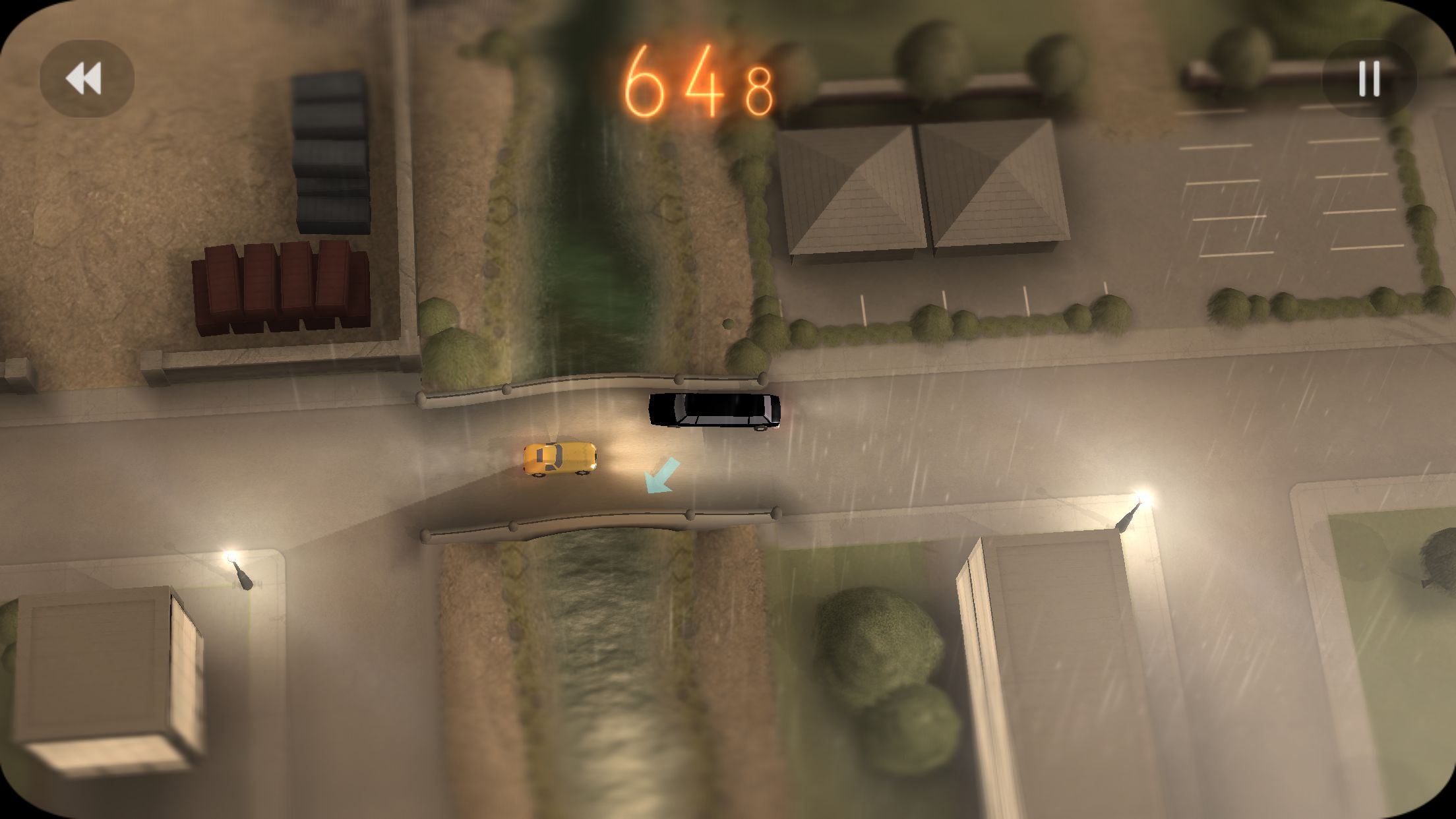 The game is about making it to the end of the game with time left, and the bonus time icons that add time to your counter are key pickups. You have to work to collect some of them. Many are just in spots where you need to take not-so-obvious or or dangerous routes. Sometimes, they’re hidden in spots that aren’t visible in plain sight. These are the ones that can be frustrating to pick up, because you might not be aware of them at first, leaving you wondering “where did the missing time go?" But once you realize where they are, the system winds up being kind of brilliant. The hidden ones force you to explore the level, and pay attention to the routes you’re taking, and where things might be. One hidden bonus caused me to reexamine the routes I used in a level, realizing there was a jump I could make to possibly save some time. The level design is clever in that way.

Does Not Commute is a game of reactions, as much as it a game of plotting and strategy, because once you find a good route to take, you have to make it in one piece! The game offers simple controls to play with. You just use left-and-right thumb taps to control steering, and that’s it. Each car has a different weight and speed to it, and the game does a great job at making each car feel individual.

The game does use the same free-to-play system that Mediocre’s previous game Smash Hit (Free) uses. You can theoretically beat the entire game without paying, but you have to pay $1.99 to unlock checkpoints. So, the game winds up giving you a fair system: you can play as long as you want without paying, but if you want the game to give you a hand, you gotta pay up. Though, practicing from the beginning and from earlier levels is something you’ll need to do so you can advance, as the key to the game is preserving time. 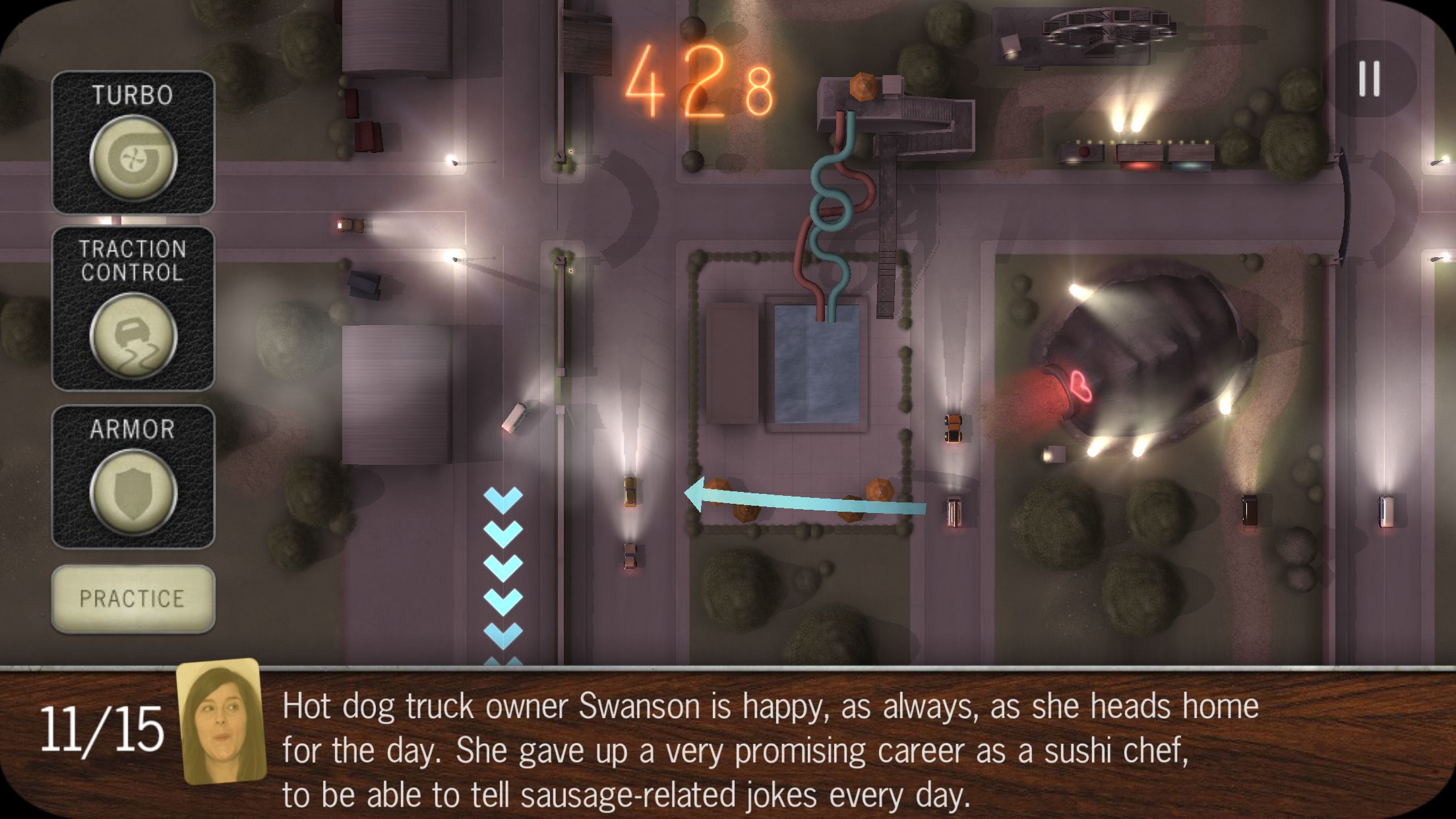 This is where Smash Hit‘s checkpoint system, also seen in some Jeff Minter games, comes in. You get the greatest amount of time left based on where you hit a certain checkpoint. Each crash where you have to rewind and lose a second? That’s time you can’t get back. So, later levels become easier if you go back to previous levels and play them, trying to minimize mistakes. This is how progress in Does Not Commute works: you play to advance, but you go back to practice, to get those precious seconds back that you once lost through crashes or rewinds.

Thankfully, the game introduces a killer feature after the first few levels which helps out a ton: practice mode. This isn’t available at first, and perhaps for good reason: this trains you to react to hazards, and learn from the get-go to try and not leave crazy routes for you to try and avoid later. It does really improve the game once you do unlock it, because it means that you aren’t just going in blind. You can avoid the big mistakes, crashes, and whatnot, that cause you to lose time and opportunities at getting big time boosts. You have to learn how to play the game, and once you do, then the game gives you these improved tools. 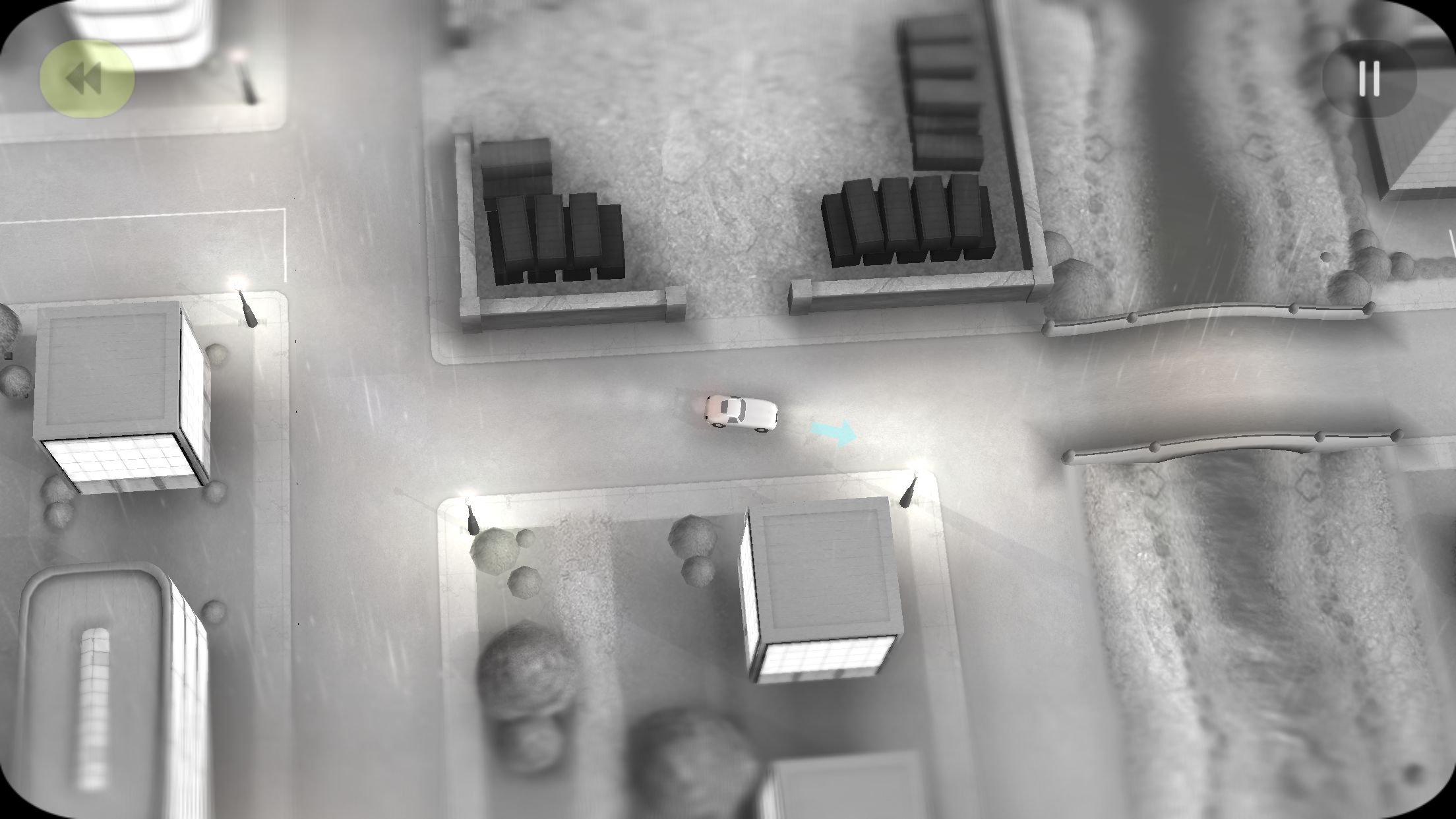 What Does Not Commute does well is to balance out the chaos of its concept with skillful play. The boosts go a long way toward making that possible, as they allow you to impact the game, and never feel stuck. There’s many routes, usually, and sometimes you just have to be smart to look for a path that’s not so obvious. Or maybe use the speed boost to your advantage to avoid a massive collision. The controls are responsive, too, so I never felt like it was the game’s fault that I was messing up, it was my own failings.

The theme of the game is somewhat humorous no matter what, because hey, there’s something funny about crashing into your own bad driving. But the little plot snippets that explain who each driver is and why they’re going where they are, with the running plot points with each one’s repeat appearance, adds a lot to the game’s character. Also, they wind up serving as nice little reminders, perhaps, that a certain car will drive a certain way, and another will not. They’re this subtle little thing, but the impact is massive toward making the game feel special and endearing

The practice mode can kind of drive you to madness if you’re a perfectionist, but I’m glad it’s there. It’s helped me be a better player. And that’s the thing: this is the kind of game that I want to play again and again, to practice until I’m fantastic at it. I want to re-do early levels to be better later on. Does Not Commute demands it, as you need enough leftover time to make it from one drive to another, but it’s rather rewarding to do so. This game makes it feel good to do well at it.

What you get here is a game that straddles that balance between challenge and frustration, has a player-friendly free model to it, and is amusing and charming to boot. Definitely download Does Not Commute, whatever you do.