Spirit Lords (Free) from Kabam is their twist on the popular free-to-play hack ‘n slash genre. Daniel Erickson, lead designer on Star Wars: The Old Republic and Phil Shenk, lead character artist on Diablo 2, played significant roles in the creation of this game. Additionally, Kabam wanted this to be what they term “white hat" free-to-play, where you can earn all loot through normal gameplay. What they’ve made is a solid action-RPG, with good touch controls, and a monetization system that can provide hours of play at no cost, but demands lots of grinding to be powerful.

The controls by default use a touch-only system, where you tap on the world to move. Tapping on an enemy will use the basic attack on them. Tapping and dragging from your character will use their special ability. Double-tapping on the world will use a blink ability where they teleport to that location, leaving some kind of effect behind. Double-tapping on them will activate an ability, like an explosion, or vines that trap all nearby enemies. Finally, there’s an ‘ultimate’ ability which requires charging to use. There’s also the option to use a virtual stick to move, and buttons for all the abilities are available in the lower-right corner of the screen. 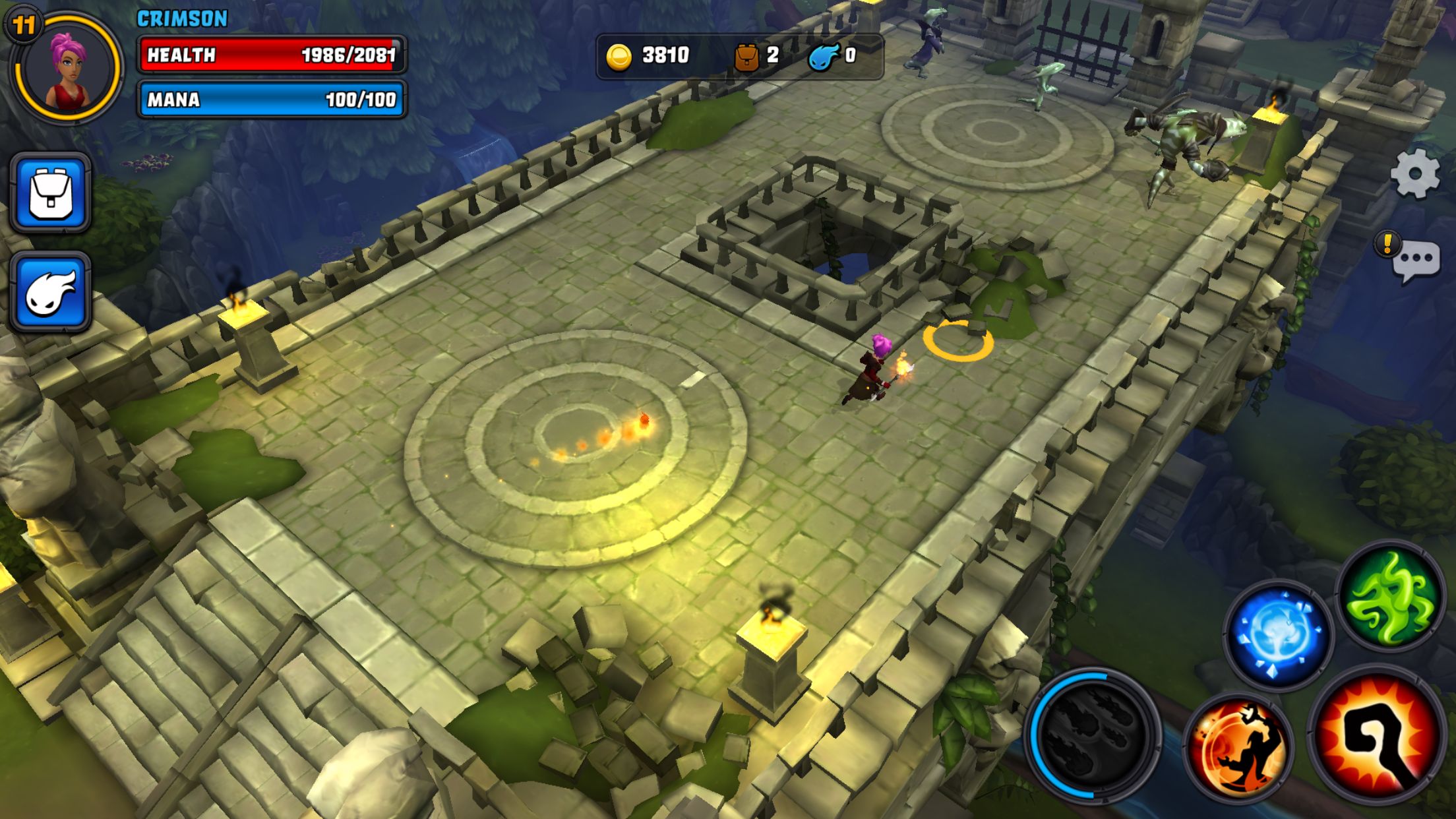 While your character has loot they can equip, the spirits are the focus of the game. They serve as each of the five abilities that you have, and are one of five elements, with the standard rock-paper-scissors elemental relationships. You can level up and evolve spirits into more powerful forms by feeding them other spirits, and crafting together different spirits to make higher-ranking ones. It’s your standard crafting system, pretty much, with the ability to earn and buy rare spirit drops. But you will get new spirits by completing dungeon runs all the time.

The writing and art credentials were really hammered down by Kabam, and I will say that this is a good-looking game. It’s a friendly, colorful style, focusing on cartoonish character models and portraits. It’s meant to be good-looking, but also with a wide appeal if you play it. This is hardly a brutal fantasy world. But the visual quality is great, you’ll feel your device get warm as you play this.

The writing is solid. The player character actually has a personality and isn’t just a blank slate! You don’t get dialog choices, but they’ve made you a witty personality who perhaps understands that they shouldn’t be going around telling people there’s a spirit talking to them, and just them. There’s a lot of fantasy mumbo-jumbo otherwise, like with spirits of dead ancestors, and long-forgotten races, but it’s in the realm of acceptability. I think that the nature of free-to-play games having to appeal to as many people as possible means that you’re not going to see a lot of games with challenging, risky stories. But hey, I’ll take “acceptable fantasy story with solid dialog" any day. 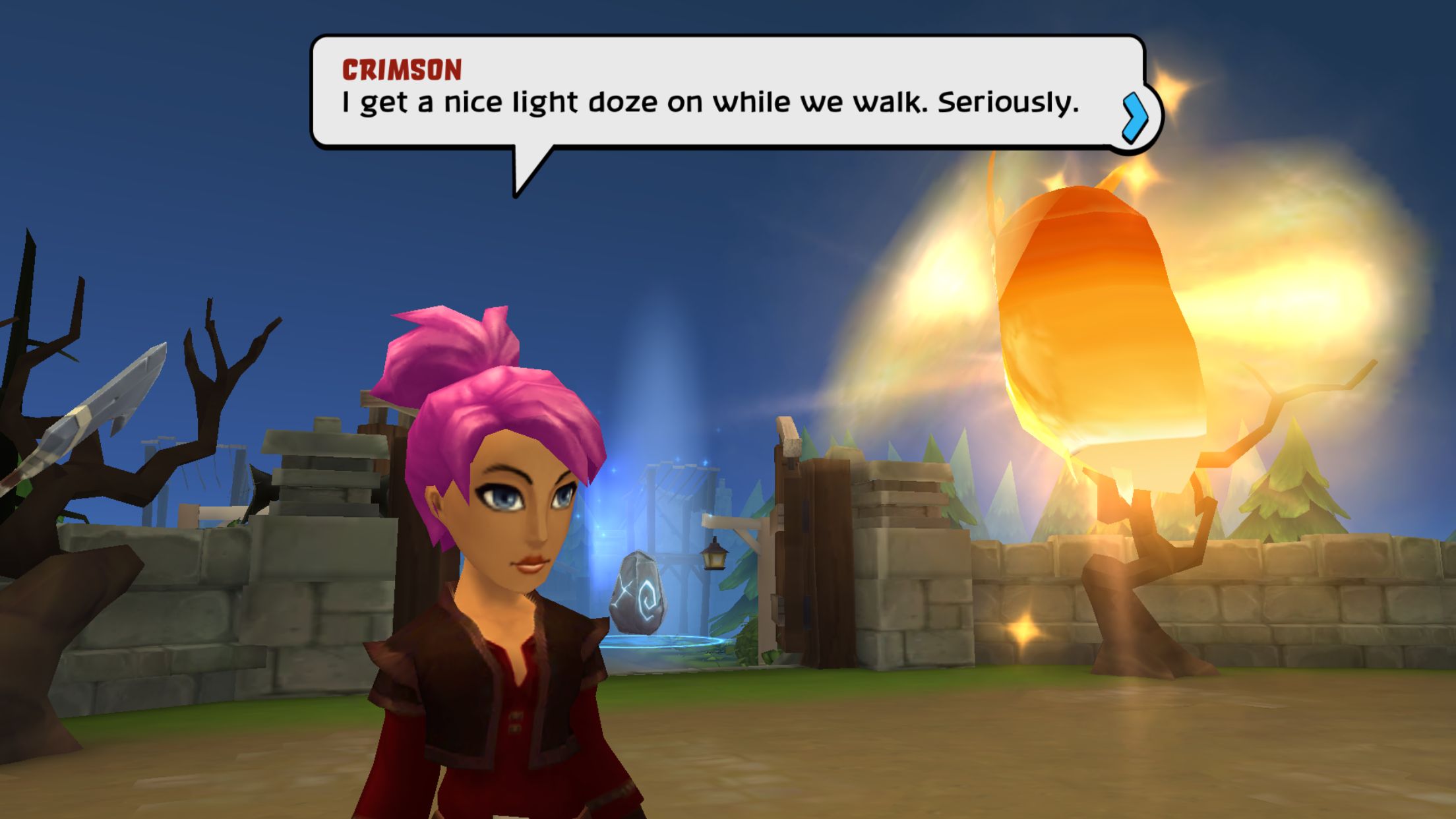 While you only start off with two character classes to play as, you can play as male or female, and customize a good variety of attributes for them. You can even change your hair and armor colors after the fact. With headgear, you can choose whether that shows up or not, while still getting the effects of it. Have no worries, your pink-haired sorcerer can still rock the dungeons while looking good. And the armor color means you never have to sacrifice style for better stats.

Spirit Lords is one of those games that works a lot better on the iPad than the iPhone, though it’s playable on the latter. The game just feels too small on the iPhone, though I did the bulk of my playing there. It’s fine, but when I jumped over to play on the iPad, it felt like the far superior experience, not only with the interface but also the controls. All the touch-based gestures feel better when you have room to use them. The default camera distance feels better on the iPad, as well. It just feels better on the big screen.

There’s iCloud support for carrying saved games across devices, a personal favorite feature and a welcome surprise. I do most of my playing nowadays on the iPhone 6 Plus, because the size is generally good enough for any game, and it’s always with me. I wasn’t expecting to be playing with my same character on the iPad when I fired up the game, especially since I don’t recall connecting to Facebook, nor having the option to do so. But lo and behold, it was there. Well done, Kabam. 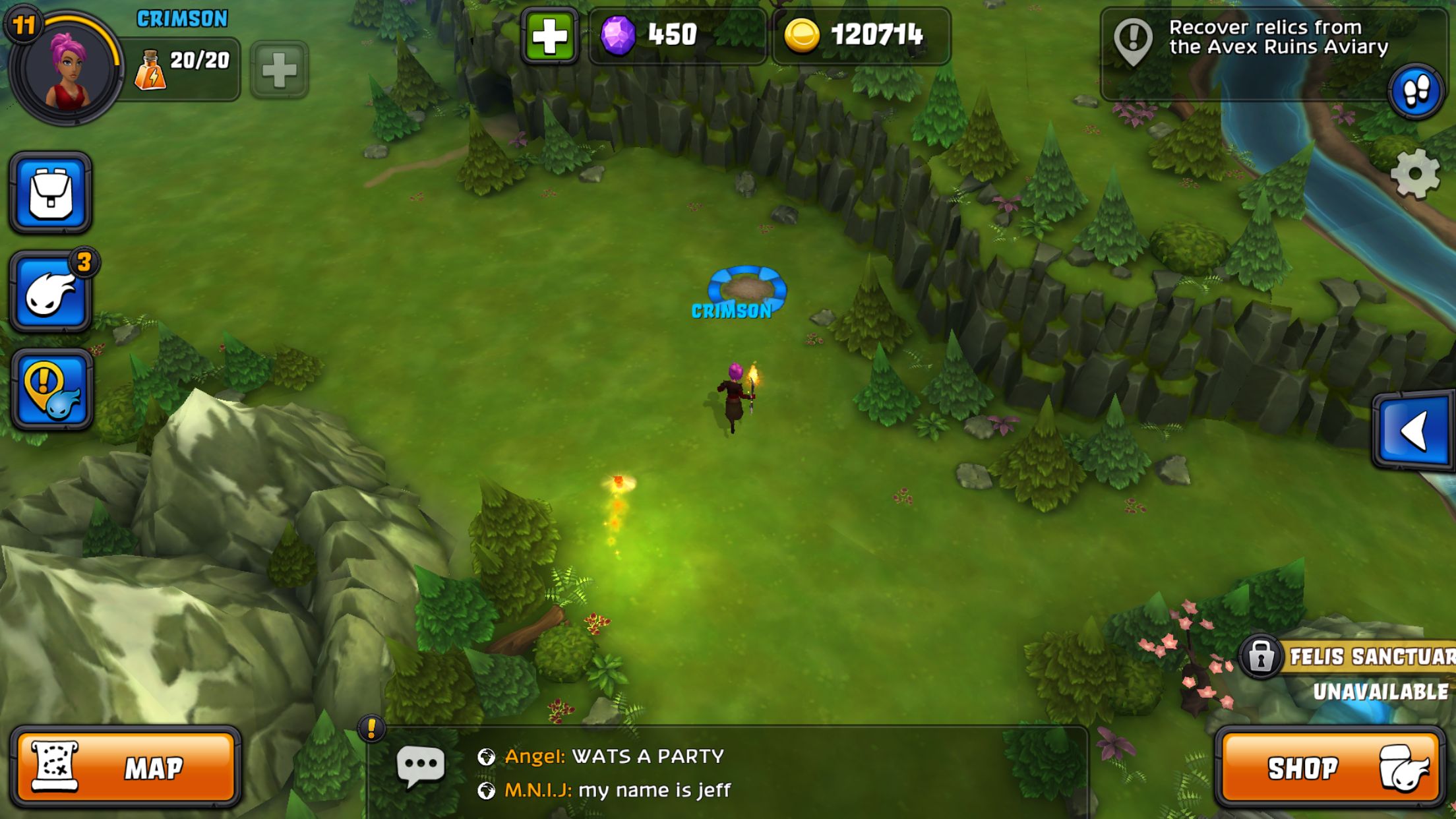 I also applaud them for making the game work fine over even my weirdly-firewalled internet I have where I live. I was able to play the game just fine without needing to play over cellular or connect to VPNs. I did struggle to play with other people at times, but this didn’t seem to be an internet issue, more of a “it’s hard to wrangle together strangers to play" issue. Perhaps a party/game-matching system for people wanting to explore dungeons together could be done in a better way. Right now, you’re just inviting random people and hoping some of them are willing and patient enough to stick around for a full party. I spent most of my time as a solo crawler of dungeons.

Kabam made a big deal about this being “white hat" free-to-play when I saw the game at GDC, and I think that this is a game you can enjoy for free, as long as you can tolerate grinding. Where you start to hit the treadmill is in trying to evolve spirits. Leveling them up is not a problem, at least early on – you’ll get 3-star and 4-star spirits that can give massive experience bonuses to spirits for leveling purposes, and you’ll get them quite often. But the spirits necessary for evolution purposes? These were harder to come by, and I often had to grind certain elemental side quest dungeons, hoping to get them to evolve my low-ranking spirits further. When you far out-rank the level requirements of these dungeons, they wind up just being repetitive slogs in the hope that the one or maybe two spirits you get wind up being the ones you want. 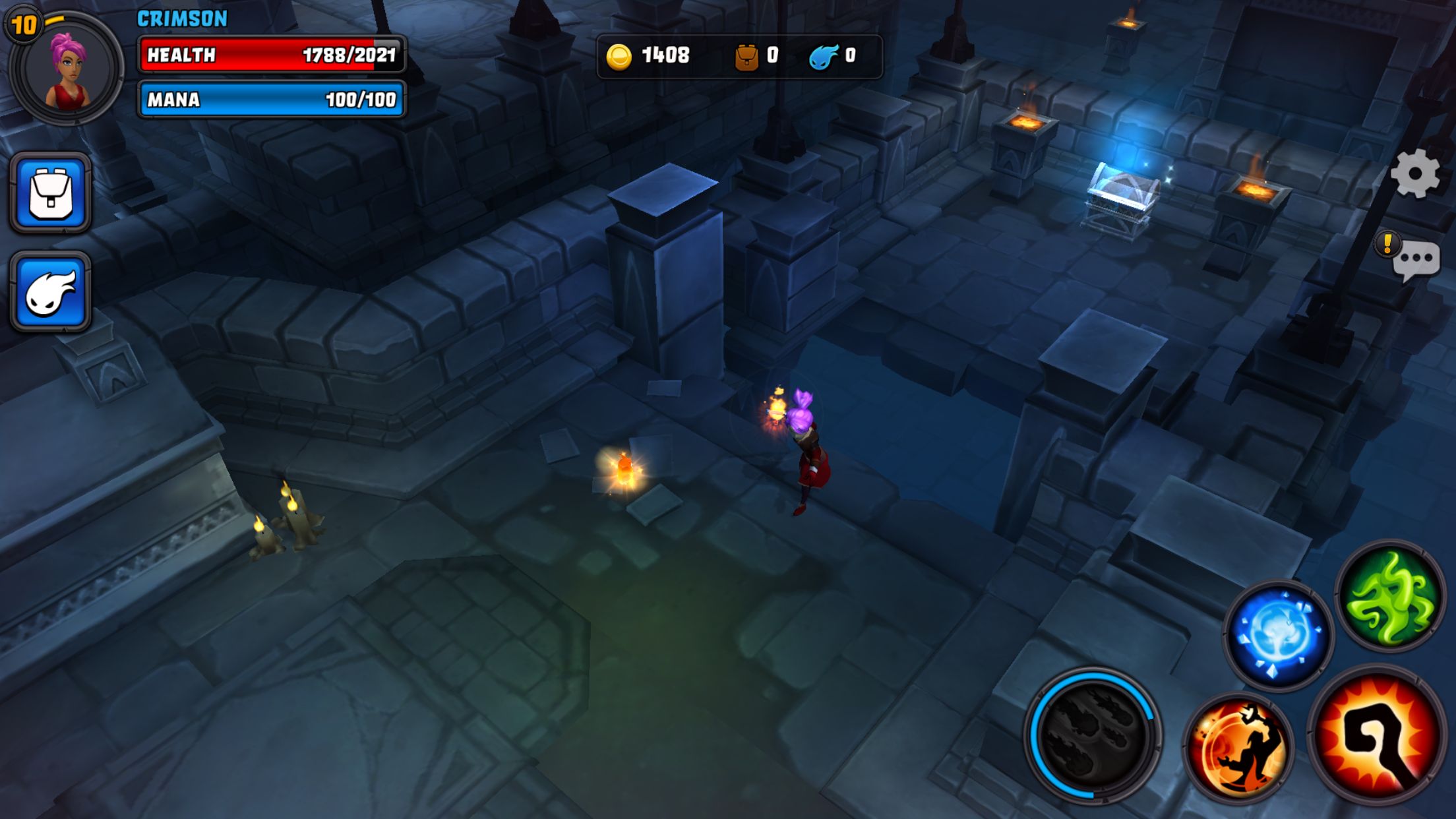 The missions that you can send your spirits on wind up being worth it for those experience-giving spirits you get in return. They’re not great for earning experience for spirits by doing the missions themselves, but they have their rewards. The energy system is such that you won’t hit the wall for a long time, as level ups happen often enough for a long enough time that you’ll keep earning refills for free. Dungeon runs will always get you some loot and some spirits, so there’s always something to be earned.

The moonstones come at a steep cost, and that’s where the monetization comes in. If you want rare spirits, it’s 650 moonstones, which cost $4.99. There are bundles with more, but any money you spend can go in a hurry. You can get moonstones as rewards and finding them on the map in chests you dig up, but not that often. You can use moonstones to buy the occasional rare loot, and revives, but their main use is to get rare spirits. So, they’re not explicitly necessary, but as missions get harder, you’re going to be tempted. There are also tickets to get 1-star and 2-star spirits, and you can earn these with regularity.

Your long-term fun with Spirit Lords is going to boil down to how much of the grind you enjoy. For me, I don’t mind a grind when it’s fun, but I don’t like the randomness inherent to getting the items you need, and especially in getting the rare spirits. If you keep at it, you might just get what you need. But I like my game grinds to have a bit more of a tangible feedback, and when I can run a quest a dozen times and not get an evolution stone, I start to question how fair Spirit Lords is. It makes level ups fair, but evolutions can be tricky. You can fight through it if you want, but I definitely hit a point where I wasn’t enjoying it any more.

So it comes down to personal taste. There’s lots of events and freebies to be had in Spirit Lords that might make the occasional player happier and more satisfied than the dedicated one – or at least the dedicated cheapskate. I think Kabam did do an admirable job in making a free game that’s at least entertaining as a free game, if not ideal. But hey, everyone’s got to make money somehow, and being a little pushy on the monetization makes sense if as a publisher you’re trying to be a bit more generous than other games. Football stadium sponsorships don’t come cheap, after all!

There’s a solid game here in Spirit Lords, with great production values, writing that’s not terrible, and a game that’s got more ‘free’ to it than you would expect from a major free-to-play publisher. If you want a solid, friendly-enough hack ‘n slash, Spirit Lords isn’t a bad choice, but not essential.