In Hearthstone‘s (Free) mythos, Blackrock Spire is the first line of defense against all who would threaten Blackwing’s domain. Your mission in week three of Blackrock Mountain Adventure (BRM) is to take down all the ogres, orcs, and dragonspawn protecting its halls and gather the spoils, some very interesting cards.

With Hearthstone landing on the iPhone this week, this Adventure is probably the first one for many new players, so a few words first about Hearthstone‘s Adventure mode. Blackrock Mountain Adventure is the second Hearthstone Adventure and it pits players against the AI rather than another player. Each Wing offers six (or more) cards to the players who successfully complete it. Every week, a new wings opens and after Blackrock Spire, two more will be coming, Blackwing Lair and the Hidden Laboratory. 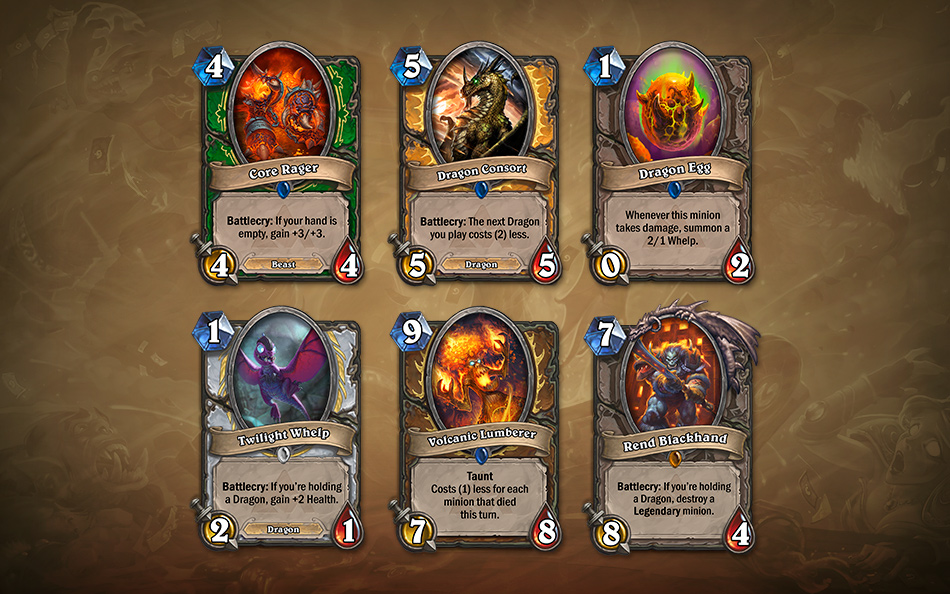 If you want to defeat the previous 2 wings so you can reap the rewards and build up your collection, use our guides.

Now, let’s go kick some bosses out of that Spire, it’s getting kind of crowded.

Omokk is a dumb brute who really, really hates damaged minions, and he’ll use his 1-mana cost Normal Hero Power Me Smash to destroy a random damaged enemy minion pretty much every opportunity he gets. His Hero Power in Heroic allows him to remove ANY random enemy minion rather than just a damaged one, so the strategy changes a bit. He has 30 health in Normal and Heroic, and it’s an easy first boss (as they often are). Running pretty much any decent deck with smaller, faster minions will do the trick. Don’t load up on big guys because you can’t trade with his minions without yours getting chipped and then smashed. Clear out his board so he doesn’t have many options to damage your minions, so that way you can ensure that they are out of Smash range. And, of course, keep hitting face the whole time. He has armor cards, so avoid running control decks of any sorts because between armor and Smash, you might have a hard time regaining board control and doing enough damage to kill him.

For Heroic Omokk, you’ll have a hard time rushing him because he’ll take out at least one minion every single turn. Use weapons to deal with his aggression in the early turns of the game and then try and flood the board constantly to nullify his Hero Power.

If you are having a hard time, try neoangel’s Paladin Deck:

Your reward for slaying this not-so-bright Ogre is Core Rager, a Hunter minion that’s kind of a weird one. It’s a 4-mana 4/4 with Battlecry if your hand is empty, gain +3/+3. This card sounds like it has potential (a 4-mana 7/7 is nothing to sneer about), but if your hand is empty this early in the game, you are in very serious trouble unless you’ve done some incredible damage up to that point. If you’ll play it later in the game when you don’t have cards in your hand, there are many better cards to carry in your deck that aren’t this situational.

This Boss was for me the most fun of the three, and it reminded me a lot of the Mage Challenge from Molten Core last week. I found him a fun fight because of his Hero Power, “Intense Gaze: All cards cost (1). Players are capped at 1 Mana Crystal." What does that mean? All cards cost 1 mana, you can only play one card a turn because of the mana cap, and cards that affect mana card don’t work (I tried dropping Thaurissan, and he did nothing, unfortunately). Bring mostly big guys (since they’ll only cost 1 minion no matter their original cost), cards that help you steal minions, resurrect minions, and, of course, removal and freeze spells so you don’t get overwhelmed. He also has 50 health in both Normal and Heroic, more than most bosses, so you’ll need some time to take him out unless, of course, you have an Alexstrasza in your deck. If you do, mulligan aggressively and get that card on the deck. In Heroic difficulty, Drakkisath will be dropping 2 minions while you get stuck with one so carry good removal, very strong minions, and the likes of Kel’Thuzad or Sylvanas to help you gain and keep board control in the face of Drakkisath’s strong minions. Mulligan for your big guys in Heroic so you don’t get behind early.

When you defeat Drakkisath, you’ll receive a card that many are excited for, Dragon Consort, a 5-mana 5/5 Dragon with the Battlecry: The next Dragon you play costs (2) less. All those who are dreaming of Dragon-themed decks are waiting for this guy because Dragon Consort can get some good dragons on the board early and his body isn’t half-bad either.

Oh Rend, Rend, with your million different Hero Powers. Rend’s the unpredictable leader of the Dark Horde, according to Hearthstone mythos, and his unpredictability is manifested in his multiple Hero Powers. His first one is “Open the Gates: Summon three 2/2 Whelps. Get a new Hero Power," and the rest are “Dismount: Summon Gyth," “Blackwing: Summonm a 3/1 (5/4 in Heroic) Dragonkin," and “Old Horde: Summon two 1/1 Orcs (2/2 in Heroic) with Taunt." As you can see from his hero powers, he’ll often be flooding the board so bring along some good AOE spells to deal with that. His deck is very dragon-heavy so expect some fun synergies to be coming your way. Because his deck has some big Legendaries like The Beast, bringing a Big Game Hunter or some other good removal for strong minions like that will be very helpful. Mind Control Tech can also help because Blackhand will often have more than 4 minions on the board (keep in mind though that you’ll mostly end up stealing cheap 1/1 guys). Also bring some strong Taunt cards to keep him from hitting you (but don’t rely too much on hiding behind Taunt because he’ll have so many minions on the board, he’ll often go right through most Taunt creatures.

and his Heroic Deck consists of:

If you’re having a hard time with this Boss, try MCotz0r’s Priest Deck: 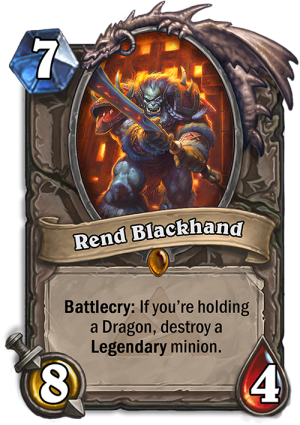 Defeating all three bosses will give you Rend Blackhand, a rather situational Legendary. His health is too low for him to be a good 7-drop, he’s a lovely target for Big Game Hunter, and his removal Battlecry makes him too situational for my taste. But hey, he’s a Legendary.

In the Druid Class challenge, you’ll fight Rend Blackhand while playing a very fun, pre-constructed deck. This challenge is relatively straight forward. As you can see from the deck below, you’ll have the opportunity to flood the deck often (with the likes of Haunted Creeper and Dark Wispers) and then buff the minions (with Roar and Power of the Wild), so take advantage of those opportunities as often as you can. Save Big Game Hunter (BGH) for Deckhand’s big creatures. Try and use your Volcanic Lumberer effectively (he costs less for each creature that dies that turn) by flooding the deck, killing many of Deckhand’s minions, and then dropping the Lumberer.
Your deck consists of:

Completing this challenge gives you Volcanic Lumberer, a good card in the correct deck, especially against flood decks, but the fact he’s a BGH target makes him much less valuable even if you can get his cost down significantly (which can cost you board presence to begin with).

In this challenge you’ll be fighting General Drakkisath, so expect the same 1-mana shenanigans from the earlier boss fight. The most important advice I can give you is mulligan for Alexstrasza, the game will be over in less than half the time if you draw it early. In general, try and always have strong minions on the board, save your removal for his really big guys, and keep in mind that he can clear the board completely with Twisting Nether. If you are a F2P player who doesn’t own any of the expensive Legendaries, this challenge gives you the opportunity to play with some expensive toys, so enjoy the experience.

Your pre-constructed deck consists of:

Your reward will be Twilight Whelp, a good card if you’re planning to make a Dragon-themed deck. It can make a strong 1-drop if you’re holding another dragon in your hand, but trying to get that dragon can make for some inefficient mulligans which can compromise your later game, so tread with caution.

I hope this guide has helped you defeat Blackrock Spire quickly and had fun doing it too. We’ll be putting up another guide today with cheaper decks for Blackrock Spire, so stick around TouchArcade. See you all next week in Blackwing Lair.