There’s certainly no shortage of endless runners on the App Store in 2015. Just as the creation of the match-three puzzler spawned countless spinoffs, the endless runner, popularized by Imangi Studios’ Temple Run (Free) series in 2011, has seen numerous variations from different developers, including the recent Daytona Rush, which added the now-popular three lane mechanic and stock cars, and Touchdown Hero, which added Sega Genesis graphics with top-down gameplay.

Now, we have Corridor Z (Free) from Mass Creation that adds zombies to the mix, which coincidentally is another video game trope at this point. What’s the sum of two exhausted genres? Surprisingly, pretty good, but falls short in a huge main area.

The one thing I give developer Mass Creation huge props for with Corridor Z is that it attempts to insert a backstory and context into the simple premise of running endlessly. Sure, Temple Run had the “plot” of you running from cave monsters after stealing a rare jewel, but Corridor Z actually boots up with a cutscene explaining the mysterious viral outbreak that has taken place in the local high school, the game’s setting. Collectible journal entries are scattered throughout the game as well which bring about the story of a character named Jill, though each entry’s attempt at humor will either float your boat or not. I felt they tried too hard at times. 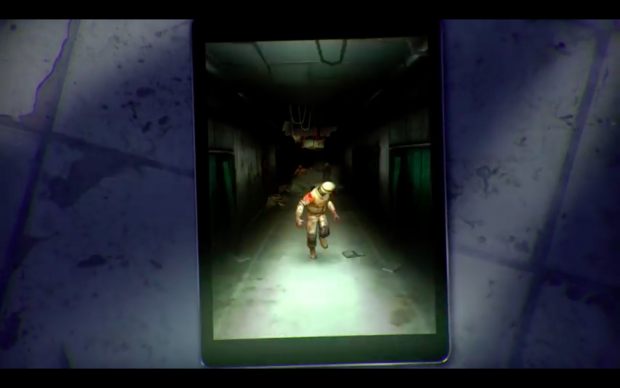 Over the course of the game you’ll rotate playing as the high school jock Logan, the cheerleader Megan, and Sgt. Williams, all of whom are locked up in the school with the undead and attempt to move from classroom to classroom, checkpoint style. That’s why you’re running. You reach new classrooms by completing objectives with each character, and these range from killing a set number of zombies with a certain weapon, traveling a certain distance in a run and so on — the typical objectives found in this genre. All three characters need to complete their own set of objectives to reach each classroom, but oddly only one mission is available at a time. Additionally, completing one objective during a run won’t unlock the next one right away — you must instead wait until the run is over, which doesn’t make a whole lot of sense and ultimately makes it feel like the experience is being padded out.

It’s a little jarring playing Corridor Z at first since it’s a reverse runner, where instead of a fixed camera behind your character, the camera is in front as he or she runs toward it. This makes turns, objects, and pickups hard to see at first, but Mass Creation cleverly uses color cues to alert you to these things. Bright green arrows illuminate the top left and right of the screen to signal an upcoming turn, red indicates a weapon pickup, and yellow signals a ration pickup, the game’s currency.

Rations are also earned by completing runs and objectives, though you can spend real money to acquire them as well. In typical free-to-play fashion, Corridor Z features incentivized video advertisements that will reward you rations each day. You will, however, get stuck watching mandatory 15 second advertisements every now and again, unless you pay the $1.99 to remove them. On the plus side, however, Corridor Z features no timers.

There’s a leveling system in place, weapon unlocks and upgrades that are attained by spending rations, and at the start of each round you’re able to buy perks to beef up your character. These include starting a run with a random unlocked weapon, more ammo, better accuracy and the ability to activate trip mines.

The combination of the perks and unlocks brings much needed variety to the endless runner genre, and that’s without mentioning the mini bosses that show up during your run, which vary between undead lunch ladies to a horde of zombified football players. It’s almost as if there’s something new to see each run, which definitely spices up the fact that all you’re really doing is traveling down a pre-determined path.

That said, I never felt that sense of tension with Corridor Z that I had from other endless runners, where I felt like I had to be on my toes every second of the way. The zombies that chase you during the run never feel too threatening, and there aren’t enough turns that make it seem as if one can pop up any moment, like in other runners. Corridor Z is the kind of runner that you can sort of sit back and relax while playing, so to speak, as opposed to the aforementioned runners where you need twitch reflexes.

I also felt the touch controls weren’t as precise as they should be, and I often times found myself missing turns or weapon pickups because the game only registered a half-swipe gesture, as evidenced by my character making a half turn or crouch motion. This has and will lead to unfortunate deaths until it becomes fixed.

The lack of urgency and dread and overall anxiousness of how much longer I can make my run go is ultimately Corridor Z’s biggest downfall, and holds back what is an otherwise great take on a tired formula. Two tired formulas, in fact. It’s a game that I’ll without a doubt keep going back to, I just wish a school full of the undead was a little more frightening.