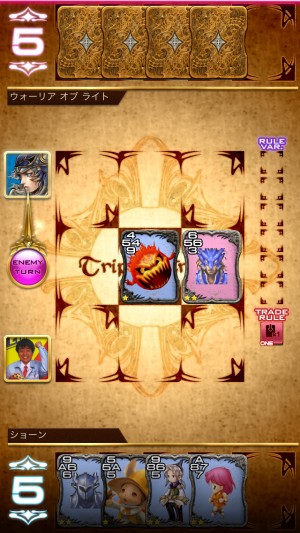 Triple Triad is a sort of collectible card game within a game that appeared in Final Fantasy 8. In that game, you could challenge almost anyone to a game, earning valuable cards if you won. It’s a bit like Othello with numbers, and some people like it better than Final Fantasy 8 itself. The version of the game in the Final Fantasy Portal app is a free-to-play take that uses the same rules as before. You can face off against computer or human opponents, and if you win, you can claim a card of your choice for your own. The cards are all based on Final Fantasy characters and creatures from various games in the series. I’ve only played a little, enough to take note of what appears to be a stamina meter, at least. Still, it’s nice to see Triple Triad getting a little love. I prefer it to the more commonly-seen Tetra Master card game from Final Fantasy 9.

The big question is, will this ever leave Japan? It’s hard to say, since Square hasn’t exactly been gung-ho on doing international versions of their various free-to-play games. If it does come, it will most likely be stand-alone as the Final Fantasy Portal app is definitely a Japan-only thing. If you’re impatient and feeling courageous, there’s technically not much stopping you from enjoying the Japanese version, however. It’s easy enough to spot Triple Triad‘s banner within said app, and if you’ve played it before, the language barrier probably won’t get in the way too much. We’ll keep you updated if we hear anything about Triple Triad going worldwide.