The idea of Tales from the Borderlands (Free) was certainly an intriguing one once it was announced. The Borderlands series definitely has a unique feel to it from its setting, dialogue, and characters that can be easily screwed up by a developer not quite in tune with the way the series operates. The good news is that Telltale Games are experts at story, so the idea that they could approach and do justice to this universe while also expanding on it in a way that isn’t just a loot-filled first-person shooter is an interesting proposition.

Interestingly, Tales from the Borderlands is trying to tell stories with new characters, and having them drive the plot. Rhys and Vaughn are Hyperion employees pulling off a heist to screw over their boss Vasquez (played wonderfully by Patrick Warburton, whose gravelly voice you will recognize right away), while Fiona and Sasha are con artists who get caught up in a tangled web of double-crossers trying to cross double-crossers. Hyperion plays a big role, and the death of Handsome Jack is a key event as well. But it’s the quartet that forms of playable protagonists Rhys and Fiona, and their partners in crime Vaughn and Sasha respectively, that are up front and center. Still, known figures will cross the paths of these characters, like Zer0 from Borderlands 2 in the first episode, and plenty of recognizable elements are strewn throughout too. 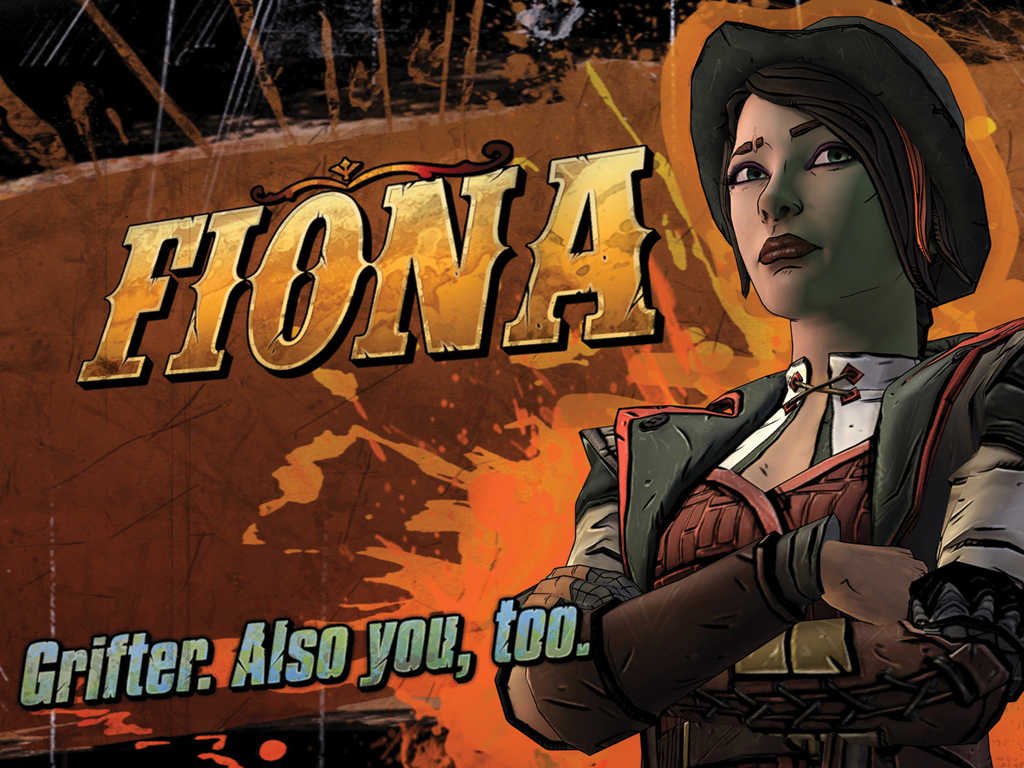 The gameplay is your standard Telltale mixture of making dialogue choices, quick-time events, and occasional sections where it’s possible to move around and explore. Rhys’ Echo-Eye implant can be used to scan certain items. Certain choices will, of course, be remembered and play a role in later episodes. Some decisions will only really change the way that fixed events play out, but other situations can even preserve certain characters. It is possible to rewind to previous sections of the chapter to perhaps change certain events, if you decide to play them out differently. 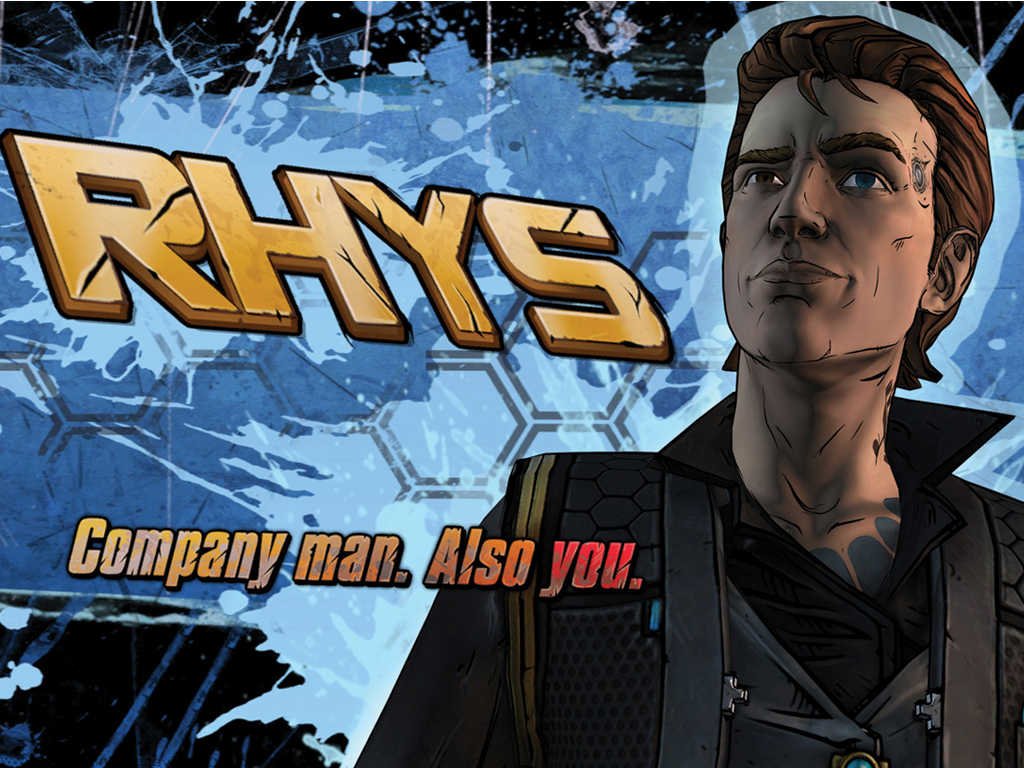 Thankfully, Telltale nailed the Borderlands feel with this game. It starts with the menus, all resembling the main Borderlands game in their style. All the known fonts and UI elements are here. In the world, items appear with their color-coded rarity, a nice little feature for people in the know. All the character introductions are in the famous style, with their cheeky descriptions too – Telltale’s definitely nailed the aesthetic of the universe, and their cel-shaded house style is naturally a compatible fit for Borderlands.

While Telltale obviously knows their stuff, they’re working in a different series here, one that isn’t based around narrative so much as it was a comical wrapper for an FPS with RPG loot. Plus, focusing on two different playable characters is another narrative challenge. There’s a certain attitude and style to live up to as well as telling interesting stories in this darkly-comic universe, and it’ll be interesting to see just how Borderlands can be adapted into the Telltale style over the 5 planned episodes here. 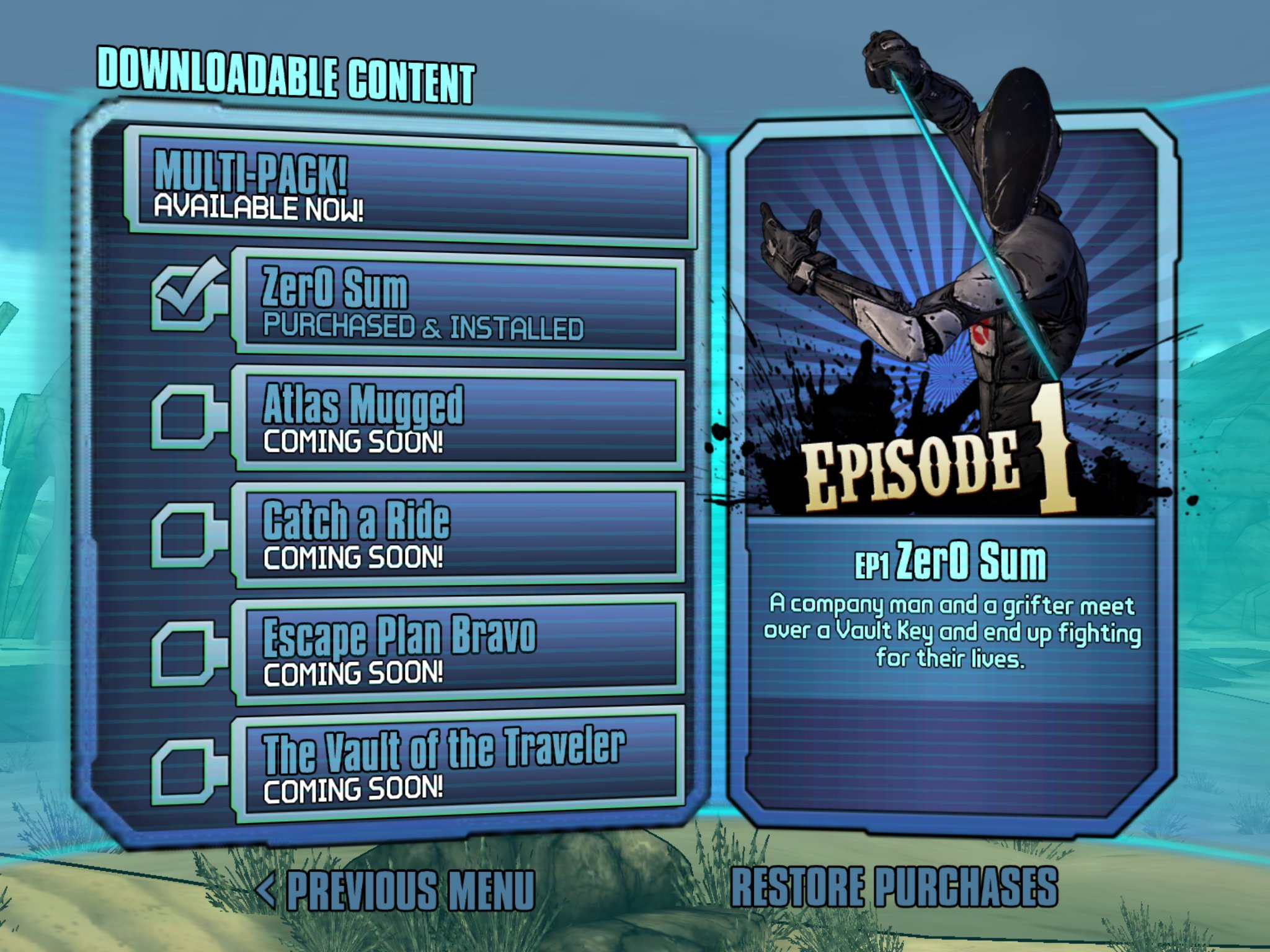 Well, this episode is a great way to start off this series. The promise and potential for Tales from the Borderlands was very high, and “Zer0 Sum" generally gets off on the right foot. It does a great job at setting up the stakes of the series, as a con deal goes belly-up in many ways, and the protagonists and new characters to the series Rhys and Fiona find themselves unwittingly working together to get their hard-earned money back while trying not to be killed by the people they’ve screwed over. 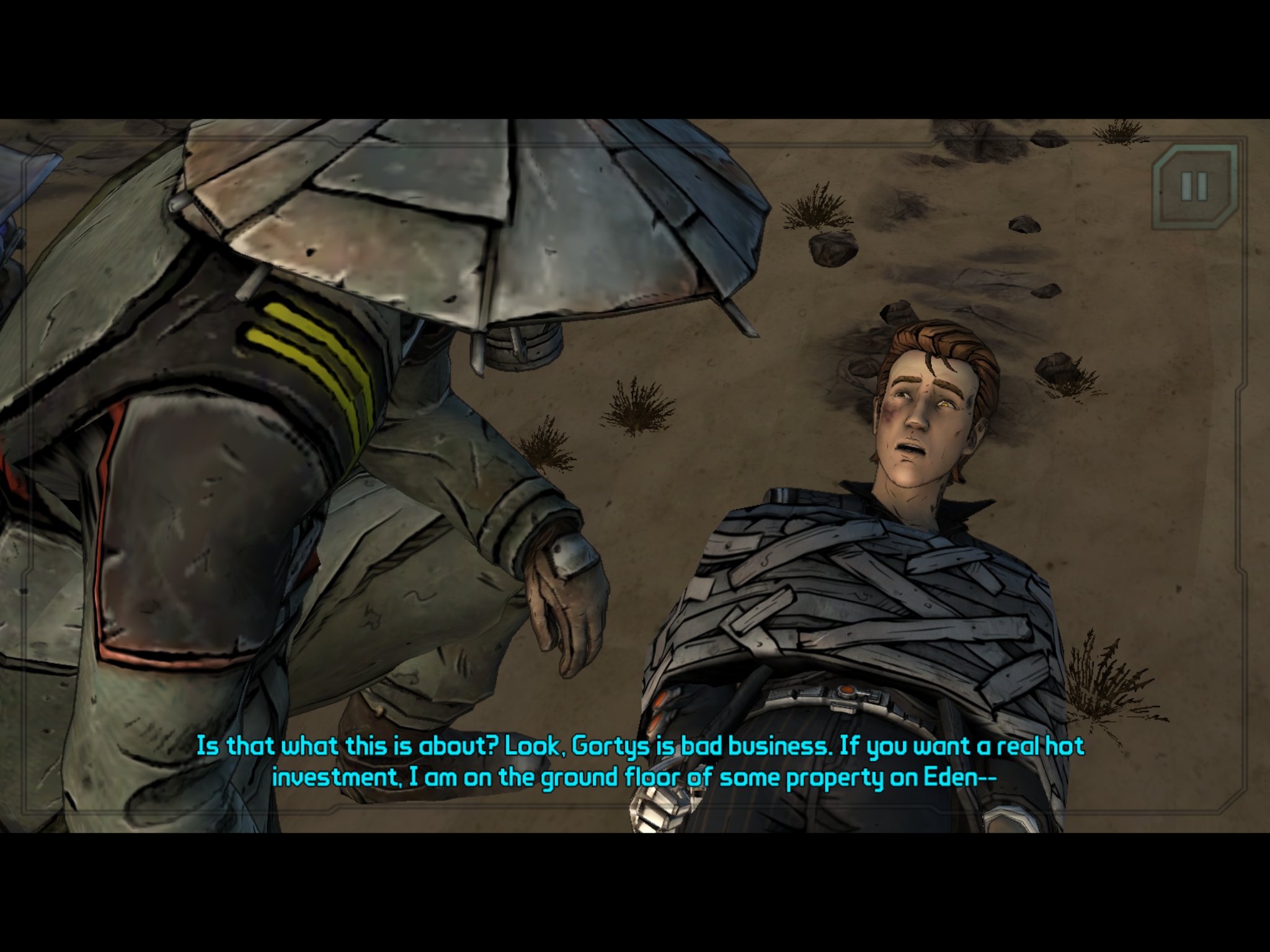 The story starts off in media res, which is such an overplayed plot device at this point, but at least the extended flashback nature of the plot is used well despite that. There’s one particularly over-the-top moment that serves as a reminder that some embellishment exists in these stories – and depending on choices, one comical moment when no, that moment really did happen. But having Rhys and Fiona tied up, explaining their predicaments to a masked villain whose identity we don’t know? It doesn’t feel like a very clever setup. Perhaps the writers found it the best way to get Rhys and Fiona introduced together and to have it make sense when the switches happen between the two, but that’s a non-factor after a short while once they’re working together in their uneasy alliance. 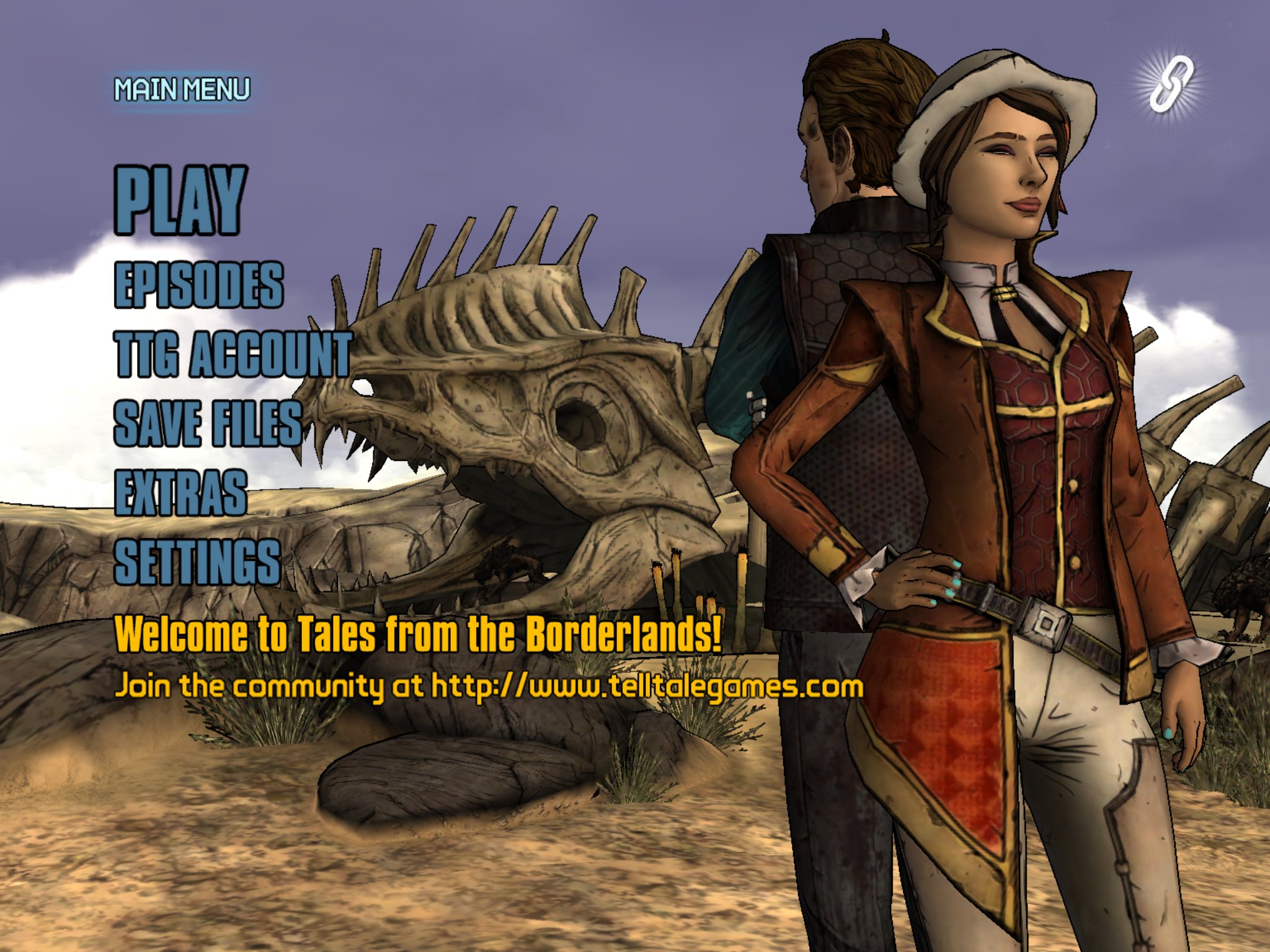 All the writing and voice acting is utterly on point here. Telltale generally does a great job at nailing that tricky balance between having intense action moments and also having that dark humor that the reference material is known for. This episode is genuinely hilarious, but its serious moments connect. Heck, it managed to make me have an emotional connection to a Loader Bot, which is an achievement since I hated those jerks in Borderlands 2. But all the characters are promising: Vasquez is a grade-A jerk, but played with such devious charm. Voice acting veterans fill out the cast, and they do a spectacular job at being hilarious while playing the serious moments the way they need to. The entire cast is pretty much full of “hey, I’ve heard that voice somewhere" people, including Troy Baker and Nolan North. 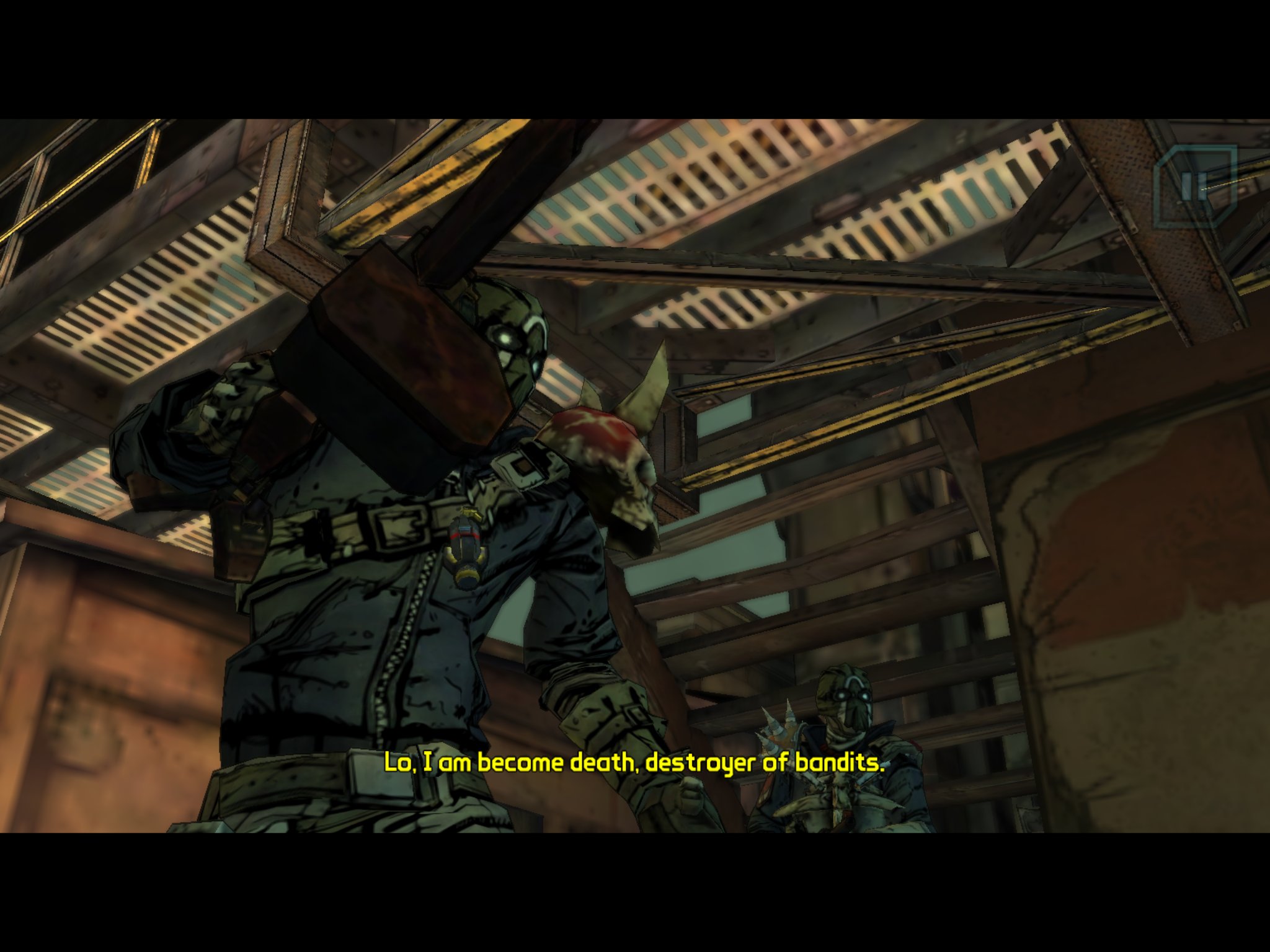 While Zer0 is in the name of the episode, and he plays a role, it’s more ancillary than anything. I’m curious as to how other known characters will play a role if at all later on. Really, it’s cool to have such fanservice moments, but the central cast and their story becomes compelling enough through this episode that I could imagine fewer cameos down the road. The world is a character, and a grounding element for this intro to the series, and now that we know the new faces, maybe fewer connections to the known elements will be necessary. 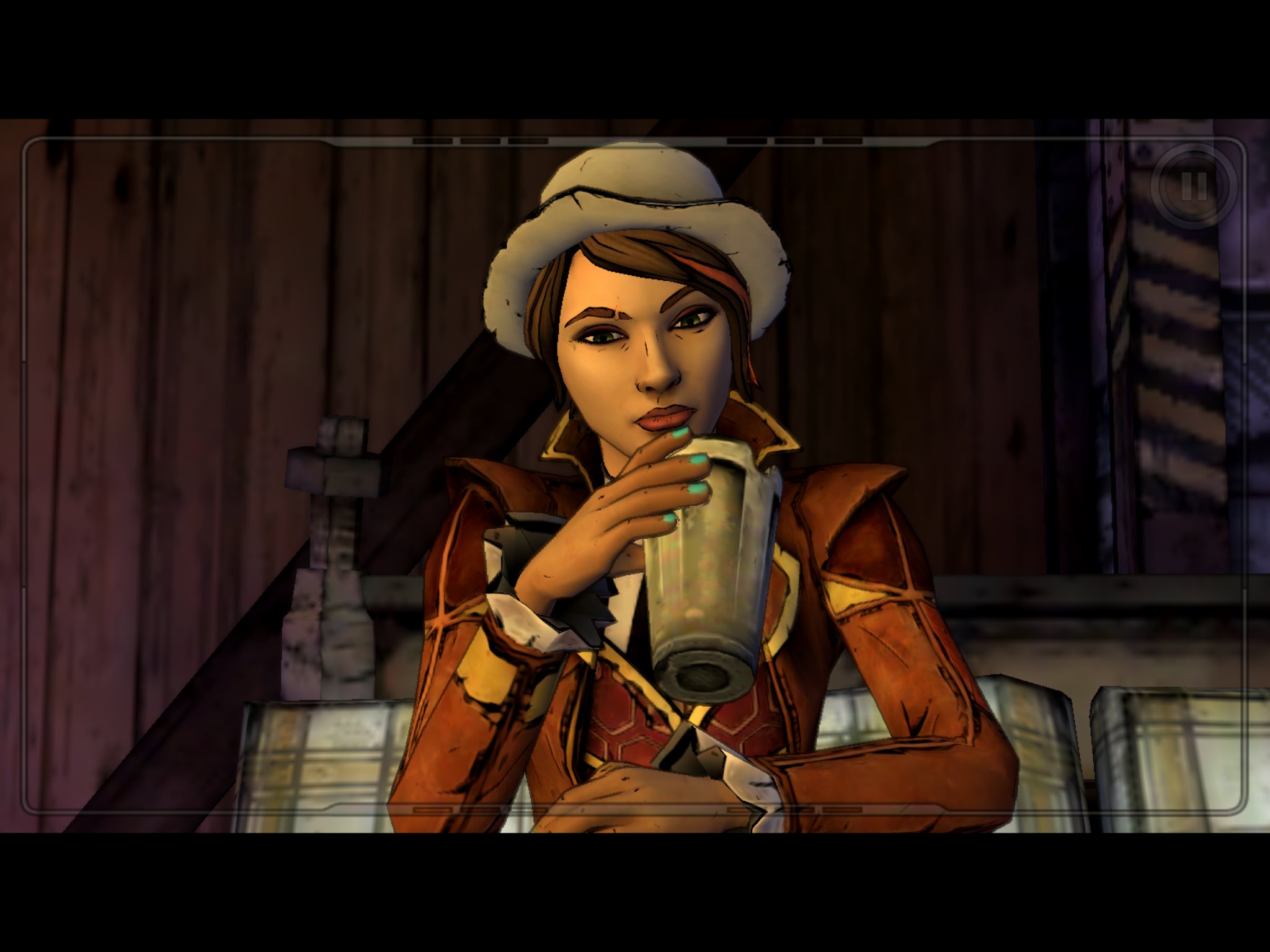 Ultimately, though, there are two questions to be asked in the coming months as new episodes release. One: once the novelty of “OMG this is Borderlands but Telltale" wears off, will this still be as interesting and enjoyable? Because certainly that plays a role for me, that I like this world and getting to explore it in a new way is just so compelling to me. The other question is if the choices made here will wind up playing a significant-enough role: if I save Fiona’s bullet, will I use it later on? Will Loader Bot save my butt once more if I keep him alive? All I know is that I can’t wait for more, based on this first episode. It’s hard to put down.

This episode starts off with you having to remove a man’s eye from its socket so that you can do a retinal scan to access a computer…with a darkly comic kicker. So yeah, this episode is a step down, if only because Episode 1 consisted of significantly less eyeball trauma. 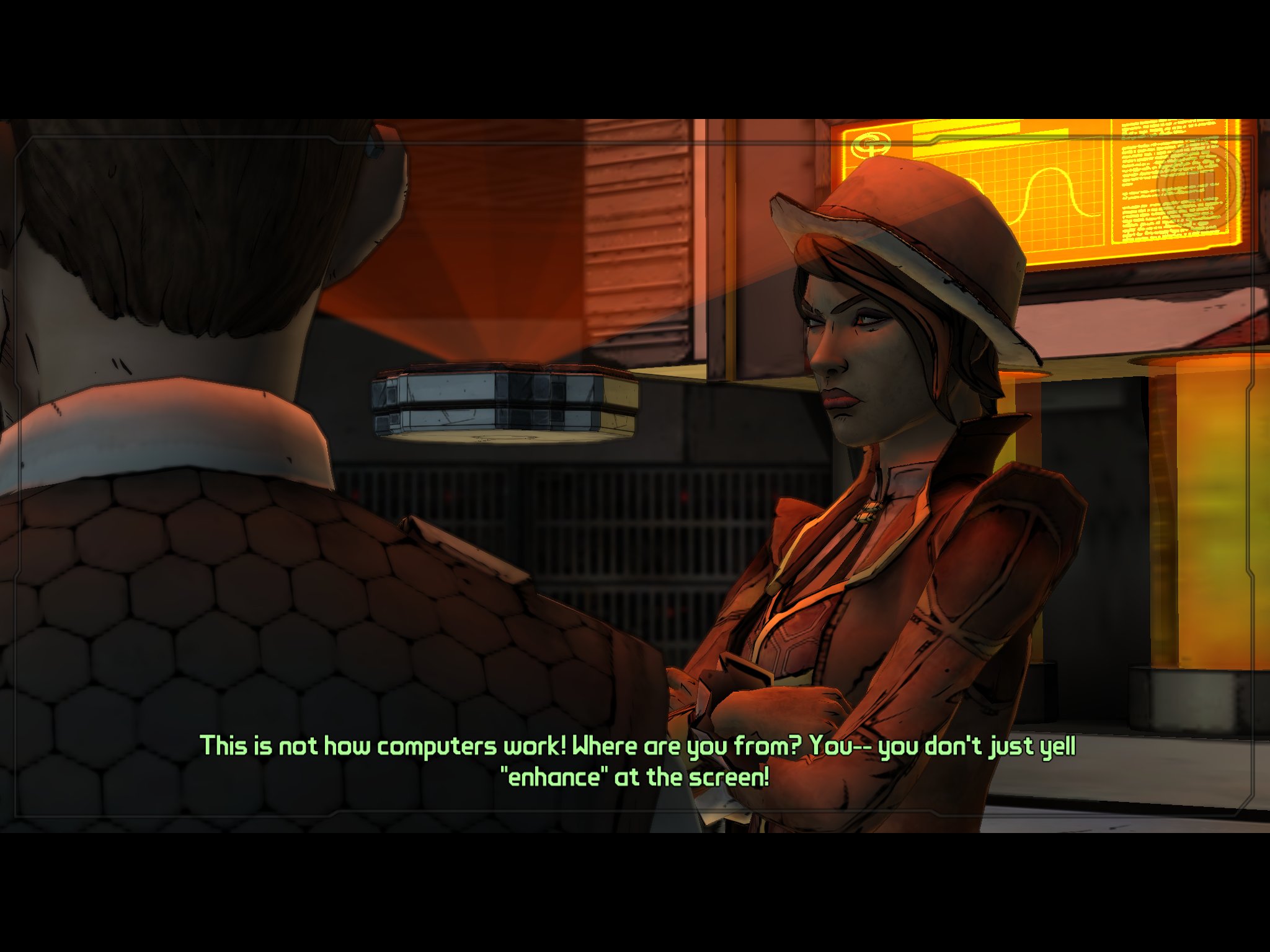 “Atlas Mugged" mostly has the duos of Rhys and Vaughn and Fiona and Sasha separated, so while interaction between the four of them is limited to the beginning for the most part. Rhys is trying to deal with having Handsome Jack in his brain – and the consequences of trying to convince others that he’s not crazy, he actually is seeing Handsome Jack, and either giving in or resisting to his influence, as per your choices. But there’s great moments here between the duo, and even the Loader Bot returns. Truly, they are all bros.

Fiona and Sasha’s story has them conning and escaping others, and sees Scooter from the main Borderlands series potentially helping you out with your busted jalopy. Some new villains are introduced, including the deadly bounty hunter Athena, who’s got a secret to hide from her girlfriend Janey, who appeared in Borderlands: The Pre-Sequel, where she made her debut. So, yeah, the game is integrating fiction even from games a few months ago, in case you’re curious about just how deep Telltale is involved in the fiction of Borderlands.

Fiona remains my favorite character to play as in the series, and that’s not just because of her sweet hat. She’s got her sarcastic humor streak, especially in the “present day" sections that frame the game’s narrative. But her story with Sasha and the sadness between them that they’ve just been betrayed by their father figure, and dealing with the emotions from that. This doesn’t demean Rhys and Vaughn’s story, just that they involve bro-fists, bro-bro, and they’re part of the goofiness that surrounds the entire Borderlands universe. Fiona and Sasha provide a nice counterpoint to the wackiness, and their stories make for a nice pairing with the two would-be con-men. 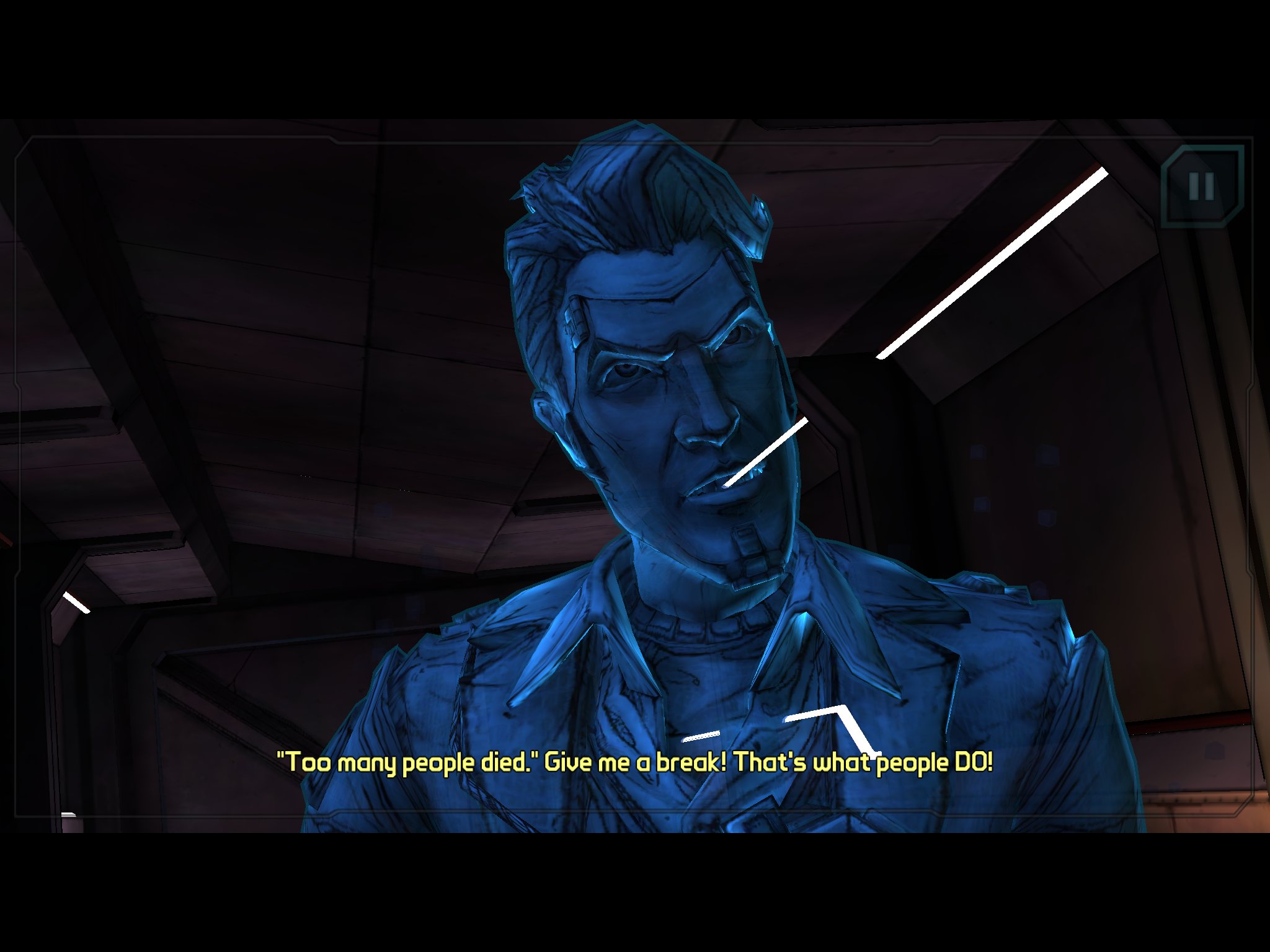 Really, this whole episode feels like it was moving some big chess pieces around to set up some huge events. It also ends on a big cliffhanger. The first episode ended on the reveal of the Handsome Jack hologram, but it still had a pretty satisfying ending. This is just one part in a larger equation. That’s not to say that there aren’t good moments, there really are. But this episode is really just about setting up decisions that will affect the story later, or at least I hope. I’d like to start seeing some payoff for the big moments of note that are happening. How will the big choices I made pay off? I hope they start doing so in episode 3, though I do expect more setup to the overall story, which will eventually pay off in the final episode. Hey, making the middle of anything is tough!

But I’m still quite excited for whatever’s next. The way that this existing universe has been put together in combination with Telltale’s narrative game chops is incredibly compelling. The game is still absolutely hilarious, and nails the Borderlands sense of humor perfectly, not to mention getting the sensation of participating in that universe. The voice acting is still absolutely on-point. And the game has done a great job at making its original characters compelling, while throwing in plenty of “hey, remember this person from the other Borderlands games?" moments in this episode. And with a case of someone like Athena, who I don’t remember from Borderlands 2, and because I didn’t play The Pre-Sequel, I didn’t really have a familiar grounding with her. But her character still works even if she seems like she’s entirely new. 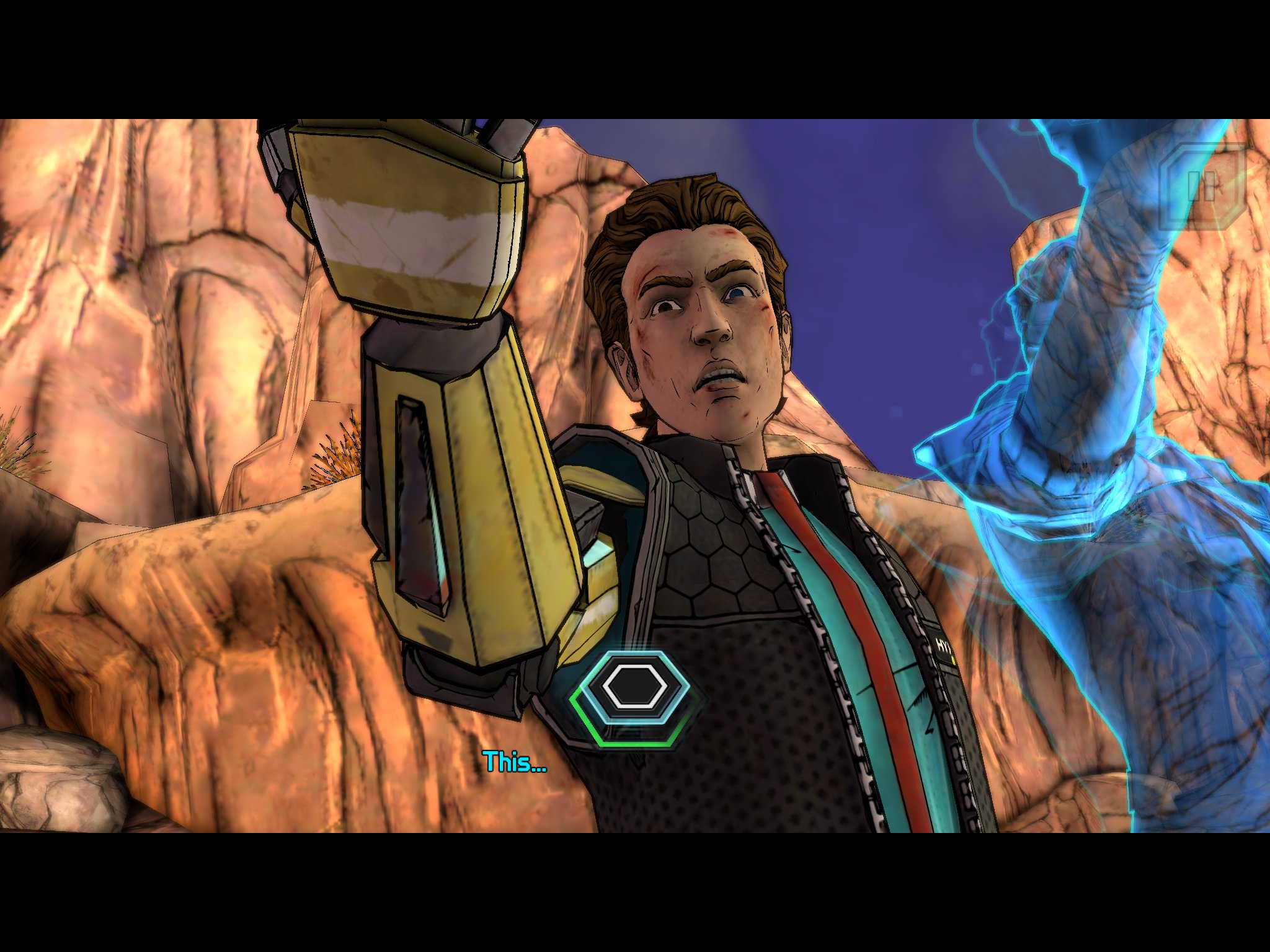 And that’s perhaps the promising thing: Telltale has shown that they still have their grips on how to strike the balance between being a Borderlands game while also being its own experience, and making sure everyone can get something out of it, no matter how experienced they are with the series. I do imagine this episode will play better when the entire series is done and consumed in a whole, rather than as a stopping point, but that’s a problem with the middle sections of any episodic work. Still, just as long as my Loader-Bot bro makes it to the end of the series, I’ll be fine with whatever happens along the way, as long as everyone’s eyeballs stay in their skulls.