Magenta Arcade ($1.99) is a game in the shoot ’em up genre, which isn’t really crowded, but is neither lacking for titles. But what this game does to stand out is extremely clever: it’s a shmup that exploits the way that fingers exist on and around mobile touchscreens, and makes it part of the game itself. It doesn’t make the game any easier, and I have some issues with the structure of the game, but this core concept makes for a ridiculously clever game. 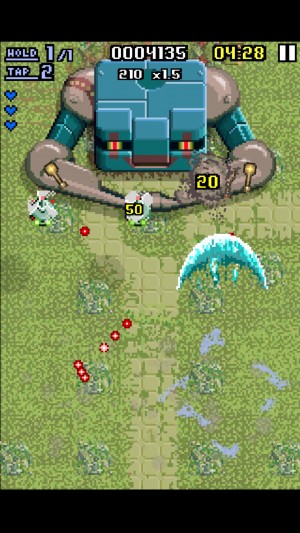 The main attraction to Magenta Arcade is its control scheme, and rightfully so, as it’s brilliant. Your finger is the ship, and wherever your finger is, that’s where your ship is, so any bullets or enemies that you hit are hitting your finger. You hold on the screen to fire, and quickly tap to deploy your special, limited-ammo weapon. It’s a system that solves a lot of the issues surrounding shoot ’em ups on touch screens, where you have to contend with your finger potentially blocking things, and dealing with offset controls and the like. This system just makes sense.

The trouble with adapting it to other games in the shmup genre would be that this game has a narrative justification for why your finger is the ship, and why it can rapidly warp from one spot to another. It’s because you control a sort of god whose powers have been stolen, but can still interact with the world. As such, when you take your finger off of the screen, it’s why enemies can’t hurt you with normal bullets. So, the game has attacks that fly up at the screen toward you to ensure that you don’t just decide to win the game by not playing until you absolutely have to destroy something. Additionally, there are weapon powerups that you can collect by tapping and holding on in-game buttons, and one boss fight involves tapping buttons in a rhythmic sequence, then literally poking him to death.

While pulling your finger off of the screen is one way to avoid damage, the game does provide a positive justification for staying on the screen and attacking. As you collect hold weapon powerups, you have to stay on the screen for them to reach their higher firing levels. Additionally, there are combo bonuses for killing enemies in rapid succession, so you can’t just play defensively, but it’s kind of nice to know that sometimes, you can just disappear from the game board to dodge the chaos. However, the enemies that fire upward toward you become more and more frequent, so good luck dealing with all that. 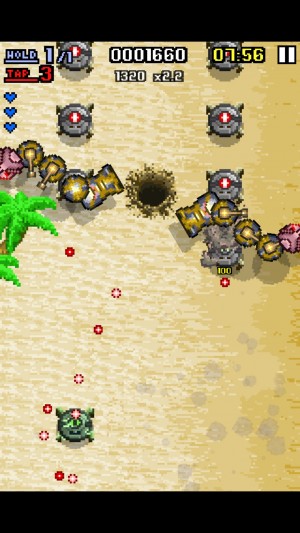 The controls of Magenta Arcade are easy to use, but the game proves to be quite the difficult affair. There are 5 levels to play through, and they offer no checkpoints evenas they increase in length throughout the game. Not taking damage is important here, as if you die, you have to start over, and you’re losing several minutes worth of progress each time. There are challenges in each level where you have to complete an objective like not killing a certain number of enemies, or taking out a wave of aliens inspired by Space Invaders. These reward you either with greater firepower or more health, and odds are that you’re going to want greater firepower, because the threats are constant. The health is a great savior if you need it, but you also can’t stack hearts beyond the default three that you get, unfortunately. Some of the clever strategy thus gets lost. My job in any level became to just not take any damage at all until the boss came, because having that firepower helps out so much, even with fighting off normal enemy waves.

There is a system where your powerups can carry from one level to the next, but it’s functionally useless here for two reasons. One, the game’s so hard that odds are that your level-3 weapon powerup and your one heart left over from the previous boss fight aren’t going to last long due to the inherent difficulty of the game anyway. Two, the levels are long enough for a mobile game that if your strategy to complete the third stage was to build up an arsenal from the previous two levels, then you’re preparing to invest a major amount of time into the game.

This is where I find the length of the levels and the lack of things like checkpoints to be a flaw: because this is still a mobile game, certain compromises need to be made for the platform and how people use it. And while plenty of people are going to sit around and play at home, sure, the person playing this on their commute to work isn’t going to want to start all the way over at an easier level just so they can beat this one level they’re going through, putting in a 20 or 30 minute investment to do so. If this system had a bit more of a clever mobile-friendly twist on it, it would fit in great with the rest of this game, which is built around clever mobile-friendly twists.