When done correctly, I feel like there’s no better mix of genres than the puzzle/RPG combination. Adding character progression and some exploration elements to a good puzzle mechanic has the potential to really turn a neat game into a full-on adventure. SwapQuest ($2.99) has managed to do just that by combining classic Pipe Mania gameplay with some great RPG mechanics. Add in some cool retro visuals and awesome music and SwapQuest is an experience that shouldn’t be missed.

As mentioned earlier, the core of SwapQuest is a modified version of classic Pipe Mania gameplay. Essentially, you indirectly control a hero that walks mostly mindlessly across a path to the exit of the mission. The path is divided into tiles that can be swapped out to direct your hero towards a particular direction. Each tile has a specific sort of path drawn on it, so swapping tiles is essential to create complete paths for your hero to move on. As you advance, the map slowly moves forward with you and the object of each mission is to reach the flag at the end. 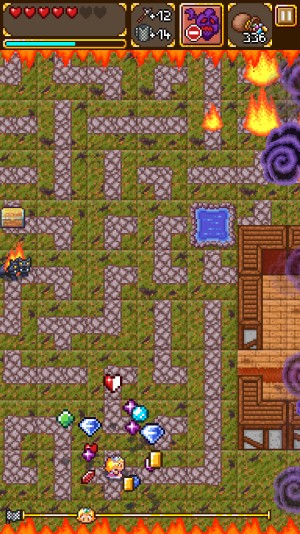 Each map has a variety of enemies, traps and treasure to collect, so you’re going to be doing a lot of tile swapping in order to collect, dispatch and avoid everything (the game actually keeps track of the amount of swaps you do in a single map). Meanwhile, an all-encompassing evil cloud known as ‘the Horde’ is constantly chasing you from the opposite side of the screen and acts as a timer to encourage you to keep moving forward. Fall in the horde and you can take some damage and are thrown out to a random tile. The Horde does a great job of creating a sense of panic and offered a very cool risk-reward for me in terms of deciding whether to press on or try and go back to collet some treasure.

The gameplay alone would make SwapQuest worth playing, but there’re a lot of added elements that greatly expand upon the challenge and motivation to continue playing. Jewels earned during maps can be used to purchase a variety of different weapons and armor that vary in strength and elemental effects. There are a lot of different heroes to choose from at the start of your adventure and each have their own special traits and varying stats (bonus points for providing enough save slots to try them all). There’s also a complete leveling system, multiple paths to choose from when traveling across the world and three difficulties to choose from. There are even a bunch of boss battles, which are my favorite in the game and do an awesome job of changing up the gameplay. Finally, there’s an endless mode for folks that just want to enjoy the puzzle aspect of the game.

I’m pretty impressed with how well SwapQuest manages to take a simple gameplay concept and just run with it. Later missions are more than just palette swaps; the game introduces enemies with new attacks as well as traps that try and force you to quick fast as far as moving around the map. Leveling your character also teaches new spells that offer a variety of cool effects. Each mission also provides neat quests within the map that try and challenge you to complete it in a certain way (for example there are time quests, collection quests and more). There’s simply a lot to do and I found myself hardly getting bored. My only complaint is that SwapQuest starts out a little slow and later missions have a tendency to be long. However, I think this issue is directly tied with the difficulty you select as the Easy difficulty is particularly easy (start out on the middle tier for a good challenge).

The gameplay is awesome, but the presentation within SwapQuest is also top notch. Yes, the visuals emulate those of the 8-bit glory days, but the game does a great job of creating its own art style within the medium vice a lot of other titles that simply look like they pulled the visuals from RPG Maker. Meanwhile, I’m a big fan of the music as it actually does a great job of complementing the game and the gameplay. Puzzle games don’t need much in terms of visuals, but I still like what SwapQuest offered.

SwapQuest is a perfect example of a game with a simple premise that is executed so well and includes so many complementary layers that it becomes an experience far beyond that premise. It’s rare to get a complete puzzle experience without any IAP or freemium elements that impact it. Obviously its roots mean that that there’s subset of folks that it won’t be able to appeal to but for everyone else it’s well worth checking out.