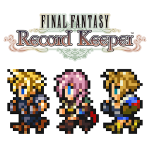 We’ve been following developments of Final Fantasy: Record Keeper for quite a while now, but our excitement kicked into overdrive last month when it was announced that the game was in fact going to see an English release. If this is the first you’ve heard of the game, here’s the basic gist from our previous article-

Well, a full English worldwide release may be sooner than you think as last night the game popped up as soft launched on the Canadian Google Play Store. Hopefully they follow the typical soft launch release cycle here and just tweak it for a few weeks before letting the rest of us play it, as I’ve heard nothing but good things about Record Keeper.

It sucks that it’s not anywhere to be found on iOS yet, but if you’re a “Canadian" or an actual Canadian who owns an Android device, you can hop in right now.