You probably know the William Shakespeare play Hamlet, or at least you have some form of cultural awareness about it thanks to English classes. You at least know the famous opening line to the character Hamlet’s soliloquy, which provides the title of the latest gamebook adaptation from Tin Man Games, To Be Or Not To Be ($6.99). This is adapted from Ryan North’s choose-your-own-adventure novel of the same name from 2013, now available in handy digital form! I’m a fan of Ryan North’s work, being a fan of the fantastic long-running webcomic Dinosaur Comics and of his spectacular run on the Adventure Time comic series. He has this particular sense of absurd humor that comes through in everything he makes, he has this distinctive voice, so as soon as I heard that To Be Or Not To Be was a thing that existed, based on a 2013 book of the same name, I couldn’t wait to get my hands on it. And it was well worth the wait, as this is an absolutely hilarious adventure. 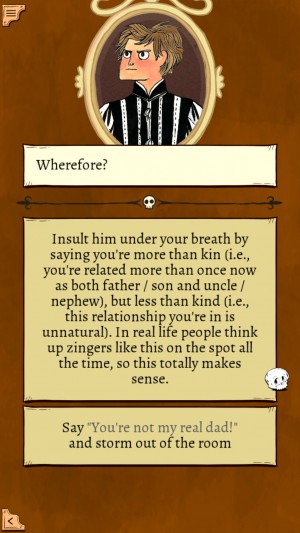 To Be Or Not To Be is based on Hamlet – or as the game’s fiction goes, Hamlet is based on this. One key difference in Ryan North’s adaptation from William Shakespeare’s original is that this is a choose-your-own-adventure book, with plenty of joking references to RPG stats and gamebook tropes. Hamlet didn’t end with a listing of stats like “poisons misused, “times you were not, and “tasteless sexism." Also, there’s the Haml-O-Meter that determines how closely you stuck to the original Hamlet.

The other big change is that this is much funnier than Hamlet as you can do far more than just re-enact the story, albeit with Ryan North’s satire dolloped on top. It goes way off-base, to hilarious effect, with a huge number of paths and endings to take, as you take the roles of Hamlet, Ophelia, and Hamlet Sr. 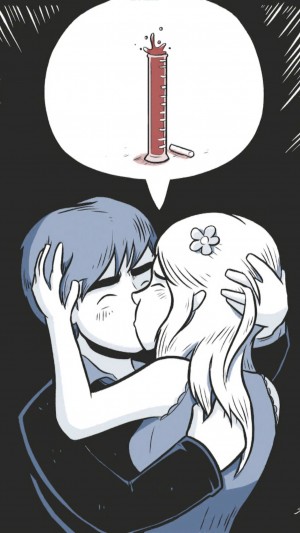 So how far off-base is To Be Or Not To Be willing to go from Hamlet? Well, in my first playthrough, Ophelia and Hamlet live happily ever after after she invents central heating. Seriously. You can make Hamlet end by ignoring the story of revenge for your father and instead inventing a way to regulate heat indoors. That’s probably one of the least-absurd endings, too. I don’t want to spoil some more of the radical endings because it’s funnier to discover them yourself, but “Claudius, murderer of Hamlet Sr., getting blown up" factors into at least two of them. Oh, and the play from Hamlet has been repurposed into a choose-your-own-adventure book in this, a choose-your-own-adventure book.

Really, I think your opinion on this game is going to vary wildly depending on your opinion about Ryan North’s humor. If you love what he does, or even just like surreal and often meta-referential humor that goes off on wild tangents, you’ll be dying laughing at this game. Otherwise, you might want to avoid this because it’s so centered around his values and humor that you probably won’t stand this.

You can play through the story much as it was intended to go by following the skull icons that pop up, which serve as a handy way to sort of just follow the directions. This is far from the boring path, as Ryan North does have plenty to say about the story, and he somehow manages to make Hamlet as it played out seem quite ridiculous in and of itself. You might just learn something, and he makes a very important addition to the story that Shakespeare didn’t explicitly include if you follow the skulls. That straight-through path is pretty lengthy in and of itself, but there’s plenty of crazy branching paths to go on, some of which end quickly, but others will carry on for a while. The original book was over 700 pages. I’m trying to spare as many details as possible, because it’s so much fun to discover everything for yourself. I hesitated to play this game in public, fearing I would burst out laughing as I did in the privacy of my own home. 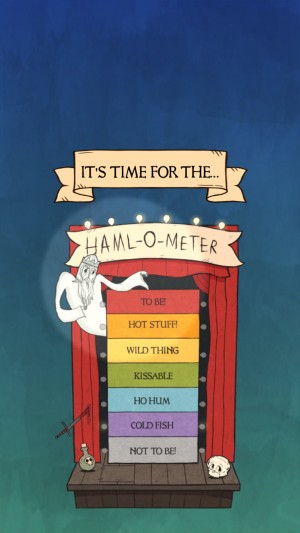 The game does run into the issue that all sorts of gamebooks and “choose-your-own-adventure" stories run into, which is that the beginning can be a bit tedious. You’ll quickly recognize all the beginning branches and choices, and it can be tedious to go through them to get to new branches. Thankfully, you can easily go back pages, and even go back to certain checkpoints, even after hitting a game over. As such, you can explore from a certain branch if you want, but these checkpoints could be a bit more granular. I’d like to have an option after game over to go back and make another choice, but then again, the choices also lose some impact when you can go back and make them again right away. It’s a double-edged sword, and neither choice is perfect. Still, I suppose I’d rather have the agency to go back immediately if I could, than to not have it at all.

There is incentive to play To Be Or Not To Be again and again, and not just because there’s a hilarious ending you probably haven’t discovered yet, but because there’s a whole gaggle of artwork to unlock. I think I counted 102, but I may have mixed a few up while looking through them. Not all of them are found through endings, some are found through events. And some events can happen in the interim of when you reach them in the story, so you really have to dig in and explore to find all the artwork. These pieces are drawn by a variety of comic artists and cartoonists, and provide some great color to the wacky scenarios that pop up throughout the game.

To Be Or Not To Be truly is one of the most purely-entertaining experiences of the year, because Ryan North manages to both live up to my expectations with his take on this literary classic, and also manage to go to places that I just did not expect. This game is utterly uproarious, and Tin Man did a great job at using their gamebook engine, along with their visual and music touches, at making this come to life.