We’ve seen plenty of games that take after the kind of endless wave-sliding popularized by Tiny Wings ($1.99), and refined by Kumobius’ Time Surfer ($0.99) which threw its own wrinkles and a monetization-friendly metagame into the mix. RAD Boarding (Free) from Other Ocean and Noodlecake feels like it could be that next milestone game in this genre, at least at first. It has a gorgeous look and a game structure that could ideally make it a game worth checking out. But the problem is that RAD Boarding focuses way too much on its structure and metagame, and not enough on making getting high scores and actually playing the game feel important at all. 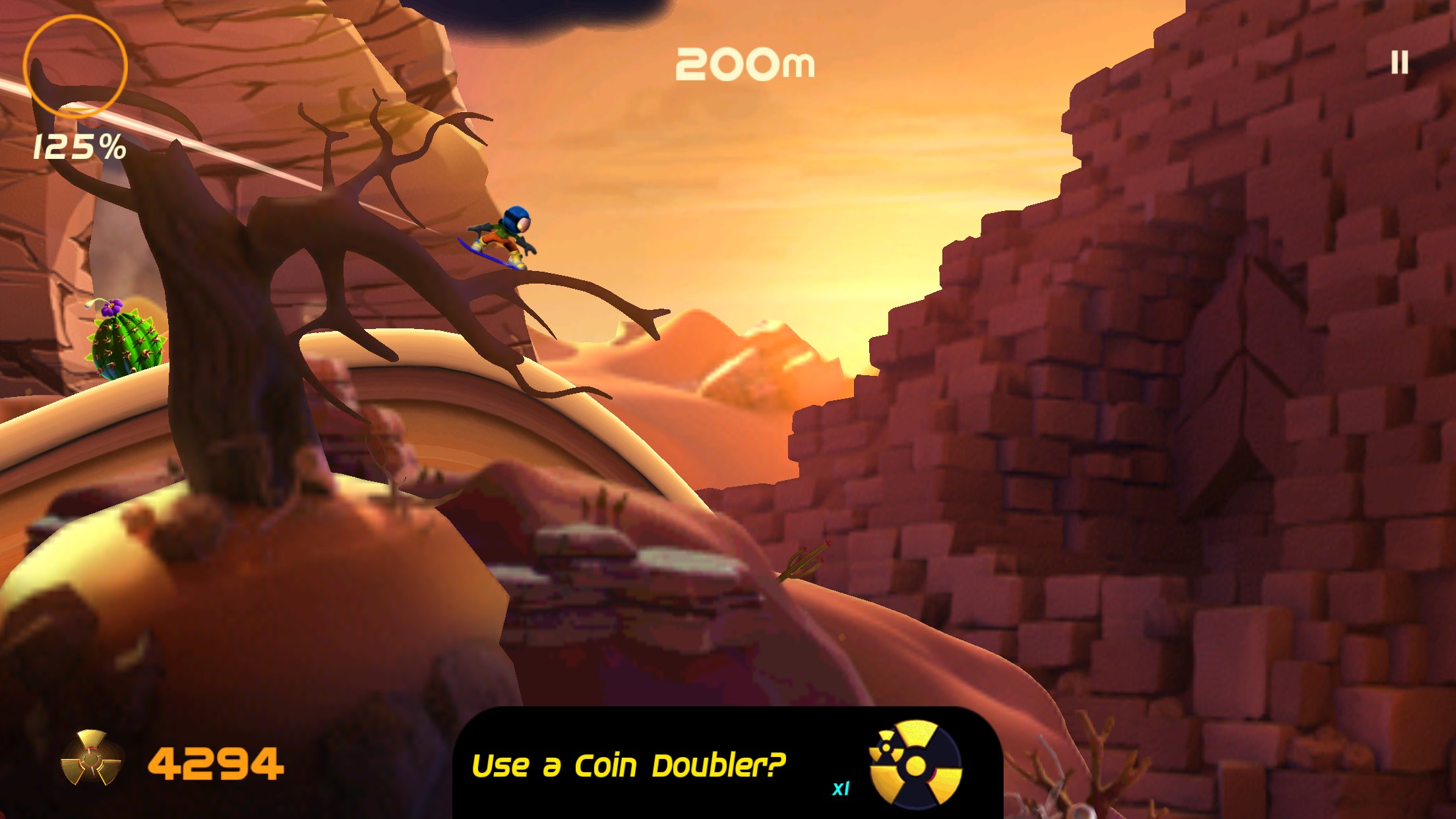 The gameplay is basically Tiny Wings, where you launch off of gaps and try to land on the downward angle slopes by tapping and holding on the screen in midair. Here, there’s the addition of snowboarding tricks, which you can pull off by swiping in midair, with experience points being earned, along with increasing your RAD meter, which will eventually put you into RAD mode. This grants you huge experience and speed bonuses, along with a coin magnet, helping to put you out ahead of the oncoming lava wave chasing you down.

Experience points are used to get level up bonuses and to eventually unlock new tricks, coins are used to buy stat upgrades. You can find frogs which will give you random parts that can unlock new costumes or milk caps, which have no purpose that I could see beyond just collecting them all for fun. There are four different levels to play in, each one adding a boost to coins and the odds that you’ll find frogs in a level, but these are expensive to unlock and require beating Tiny in each level. Tiny is a giant, eyepatch-wearing bear, who must be satisfied through the performance of radical tricks in rapid succession. 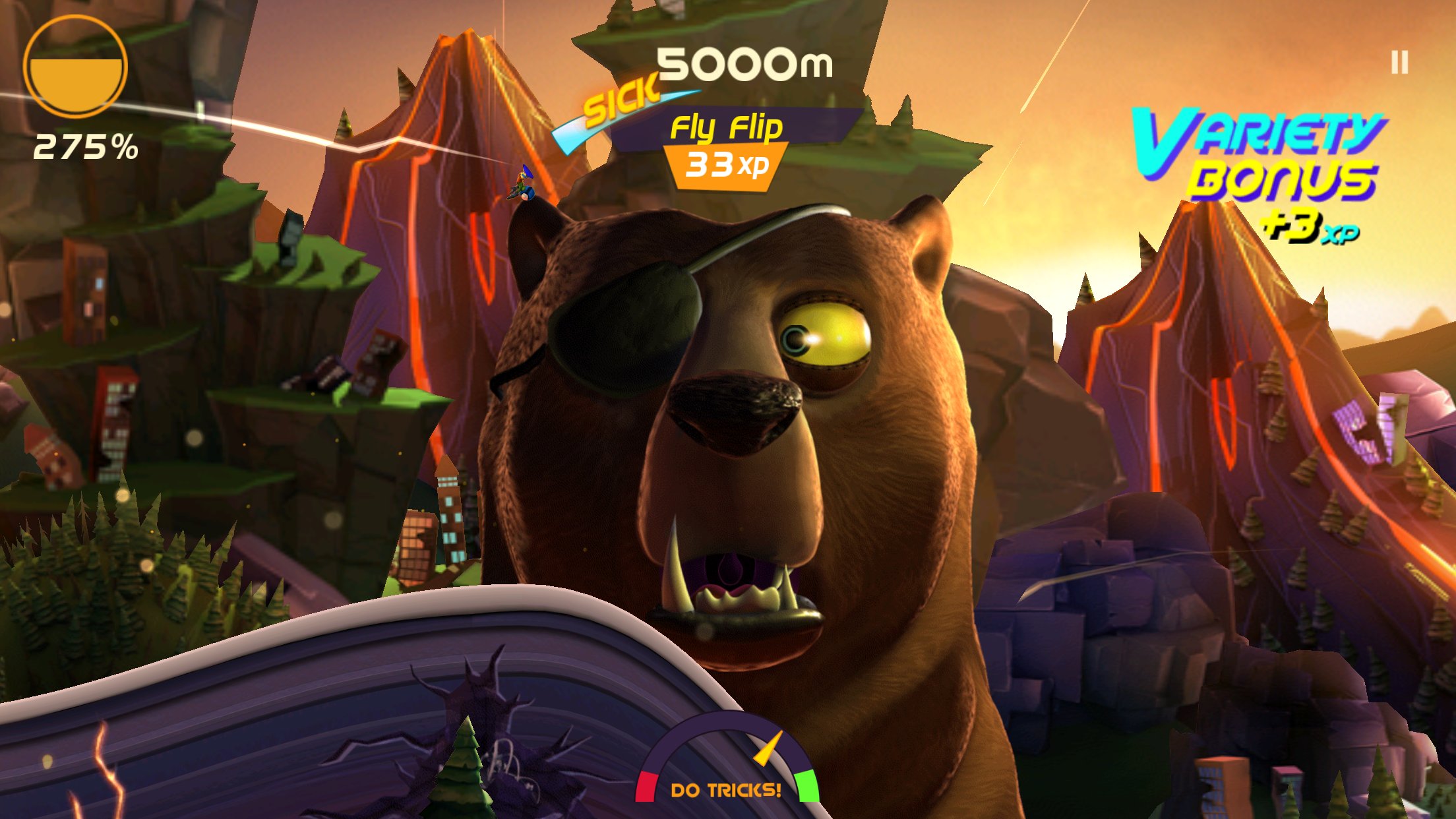 RAD Boarding does nail the basic mechanics of this kind of wave-sliding game, and it does so in a gorgeous way. The game looks amazing, with vibrant colors and solid detail, and it’s pretty clear based on how warm my iPhone 6 Plus would get that the game is pushing the hardware. This is actually kind of a problem if you care about battery life at all, as this game will run it down quicker than Tiny Wings will! Still, that’s just a sign of what’s going on under the hood here. And the controls are responsive and the sliding mechanics work well, at its heart this game does a good job with what it’s doing in this genre.

RAD Boarding does kind of bothers me in the way that its metagame (the things like coins, upgrades, and costumes) is handled, in that it feels like it takes up too much attention span for the game. I’m not opposed to metagames at all – even Tiny Wings had things to do outside of just surviving, in order to increase your score multiplier. And Time Surfer had powerups and characters to unlock. But both of those games, it felt like the metagame was there to drive you to play more and to get higher scores, and that those scores were the key reason to play. Here, it feels like the game is meant to serve the metagame, when the reverse is ideal. 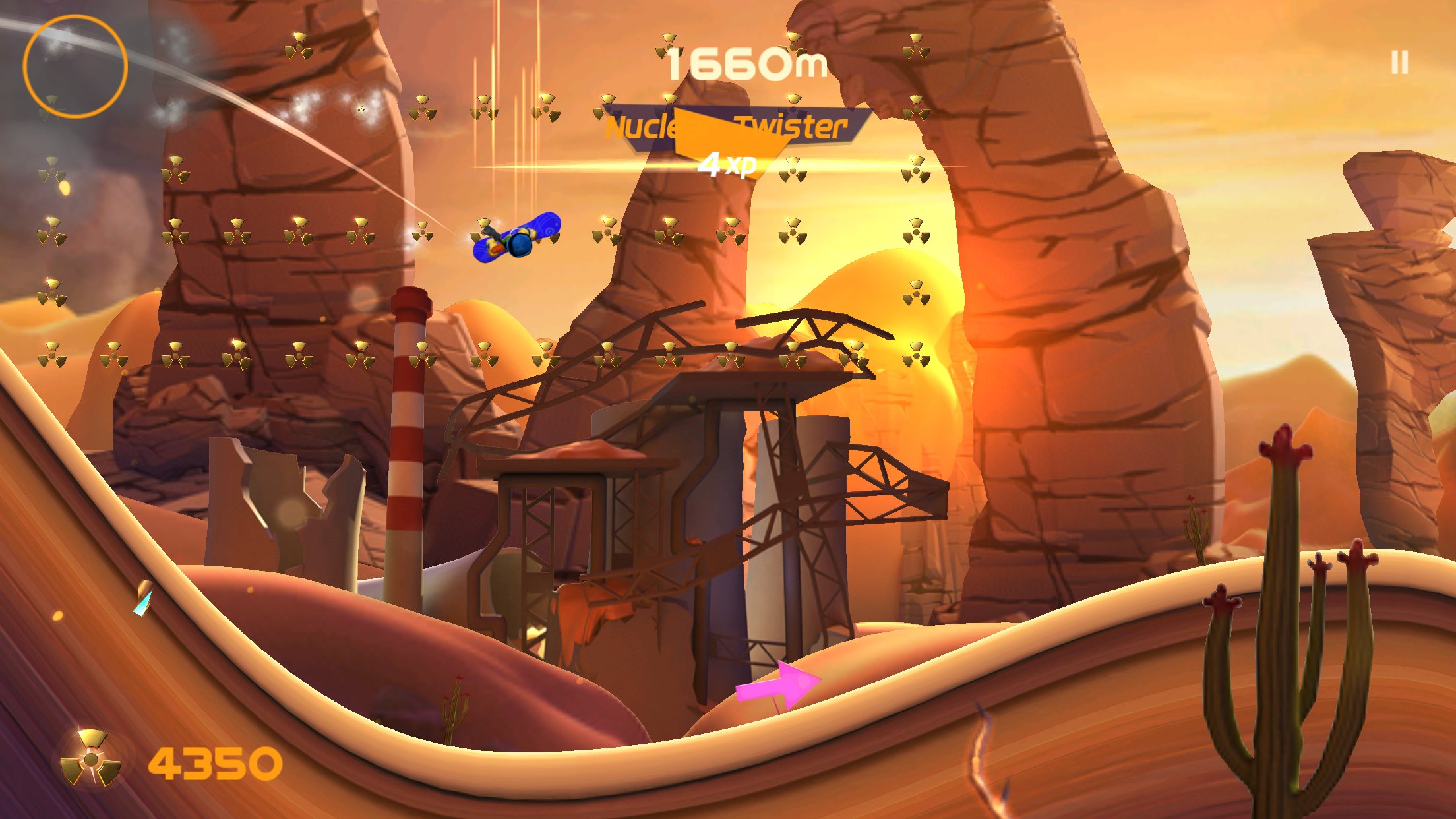 I feel like the game doesn’t quite make a big enough deal about high scores, for example. There’s seemingly no Game Center support, so I can’t even compete for high scores against others, though this is promised at some point. It’s a bizarre omission, or at least a bug on the iPhone 6 Plus. The game makes a huge deal about the milestones in each level, and collecting frogs, but what’s the point of everything? It’s to unlock new pieces of costumes, to get the milk caps which have no purpose that’s apparent, to get more coins to spend on upgrades to play more, and to buy new levels. But why? The game misses the point of having something to show for all this besides just progress.

When I play a high score game like this, I want my high score to mean something. I’m fine with games with free-to-play monetization and an overall metagame to play through. Temple Run 2 (Free) does a great job at particular at all this. It give you plenty of things to buy and upgrade, but it’s always about chasing after the high score, and trying to beat your friends, not just about getting those upgrades. RAD Boarding forgets that key portion of the game. Where’s the grounding in why I should care about doing everything?

Even the stunts suffer from this problem. If some stunts had a higher difficulty but offered more points, then it’d be worth doing them, or to care about them. Instead, tricks are really only worth the same point values, and while doing different tricks grants a variety bonus, these bonuses are so small as to be lacking in relevance. These bonuses go to experience, which unlock coin bonuses and extra tricks, so the benefit isn’t great. Why should I worry about using two fingers for the more advanced tricks, anyway If there was a more tangible bonus to doing these, I’d understand, but right now, I’m just kind of baffled.

This feels like the kind of game that could have used a soft launch. RAD Boarding is incredibly well-made as a game, but everything around the game feels like it needed some tweaking and time in other people’s hands to be changed and improved. This game has real potential to be fantastic with some added feedback, and metagame stuff has the potential to be tweaked and changed to be a lot better, to reinforce the fun of actually playing the game, and to provide the purpose for actually playing it. These are things that feel like they could be fixed! But in a world where a global launch is a one-and-done proposition in many cases, RAD Boarding will have the apocalypse catch up to it before it can pull off its tricks.