The developers behind The Pinball Arcade (Free), FarSight Studios, are nothing if not extremely passionate about pinball. They’ve been in the games industry a pretty long time, over 20 years now, but they didn’t truly find their niche until the 2004 release of Pinball Hall Of Fame: The Gottlieb Collection on the PlayStation 2. Its initial release was perhaps a little too early to catch the renaissance of video pinball, but it at least did well enough that they followed that up a few years later with The Williams Collection. With Williams tables being a lot more well-known among Americans, that release ended up doing pretty well, earning high praise for its faithfulness to the real machines. While this was all happening, digital storefronts started to become more popular. Soon, retail retro collections were becoming retro themselves, with a la carte offerings proving more popular with fans. It was a natural fit for the type of work FarSight was doing, and so The Pinball Arcade was born.

When FarSight was first pitching the concept of The Pinball Arcade, they talked about their desire to bring even licensed tables to the platform. They acknowledged that one of their big goals was to bring The Addams Family to the collection, but extremely complicated licensing seemed to put the machine out of reach, even as seemingly more difficult goals were knocked down, like licensing the entire Star Trek: The Next Generation cast or Arnold Schwarzenegger himself. As the months came and went, the question kept coming back over and over: Where is The Addams Family? Having finally sorted out the licensing to the best of their ability, FarSight launched a Kickstarter late last year to bring The Addams Family to The Pinball Arcade. It was, of course, successful, and so the table that many had longed to have in digital form finally hit a few days ago. 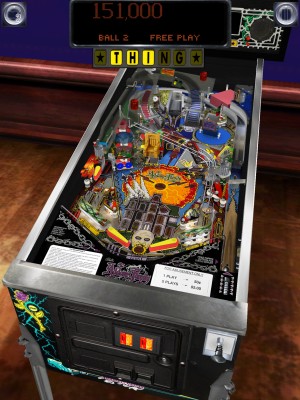 The Addams Family Pinball might seem like an unlikely candidate for such fervor, but it’s actually the best-selling pinball table of all-time. The mystery behind that fact is a little harder to sort out. Sure, The Addams Family are reasonably well-known characters, and the 1991 movie the table was based on pulled off a double-surprise by being a pretty big hit and a decent flick, but the same could be said even more so for other licensed tables that ultimately sold fewer machines, such as Terminator 2. I don’t think anyone could say for sure exactly what was in the secret formula to success, though I’m certain Midway wished they could have figured it out themselves. There are certainly a lot of great things about the table, and it could be any one of those elements, the combination of them, or even just dumb luck that the top sales spot for a flipper-based pinball machine will likely read “The Addams Family" for all of eternity.

Designed by Pat Lawlor, the man behind some of the most entertaining pinball machines of the latter-day arcade era, The Addams Family is an interesting specimen of that era of pinball. Typically, games of this time period were fairly complicated, with a main goal you had to work towards by solving a variety of missions. Addams Family ditches that idea in favor of a simple goal: score as many points as possible by visiting the many rooms of the Addams mansion and opening up the vault. A special treat awaits those who manage to visit all of the rooms, but it’s more of a bonus than an ending. The concept is fun for both novice pinball players who are simply playing to enjoy swatting the ball around and watching a little light show, and for veterans who prefer more complex sequences of shots and targets. It’s also clearly conveyed by the map of the mansion on the main board, with plenty of rooms to keep things interesting, but not so many that the game becomes overwhelming. 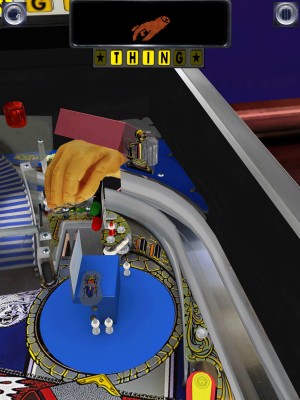 The table also has a lot of fun gimmicks, including a magnet in the center of the playfield that will occasionally activate, throwing your ball off-course almost supernaturally. The top-left flipper will sometimes activate on its own, supposedly under Thing’s command, making a surprisingly accurate shot to the other side of the board. Multiballs come fast and frequently, too, with three different places to sink the ball building up to the Showtime Multiball, which arrives with all the booming sounds and  colorful lighting sequences you might be used to from Lawlor’s other tables like Whirlwind and Funhouse. The placement of the various elements on the board gives the table a really nice flow, with almost every shot producing some sort of pleasing effect.

The gameplay is only half of the package, though, and I think how well the table integrated its license played a key part in its success. The playfield has a compelling design, with an electric chair sitting in the middle, Thing’s box in the upper right-hand corner, and Uncle Fester sitting right between the lower flippers with a lightbulb in his mouth that lights when the saver is in effect. The famous main stairway of the Addams mansion forms one of the ramps, while the vault target is obscured by a bookcase that you have to move out of the way first. The Thing box actually has Thing inside of it, with him crawling out and scooping up your ball to lock it for a multiball. The map of the mansion sitting in the center of the playfield clearly shows all of the goals and prizes for each room and lets you know which ones you’ve accomplished. The game also features a digital display that has a lot of cute animations on it if you can spare your eyes to look at it. I particularly like the animations that play when you’re doing the Hit Cousin Itt bonus. The little hairball gets chased around and crushed by the ball when you make successful hits. 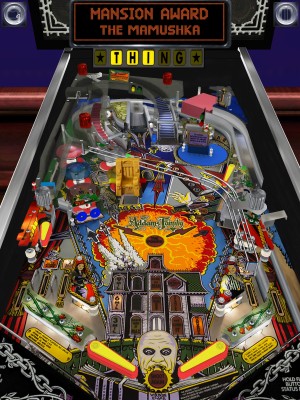 Addams Family makes great use of sound, as well. Anjelica Huston and the late Raoul Julia lent their voices as Morticia and Gomez, with plenty of soundbites from the movie and some specially recorded for the game. Julia especially delivers an excellent performance, as ever giving his all for something other actors probably would have phoned in. Then there’s the theme song, as perfectly incorporated into the game as any could be. That familiar tune dominates the soundtrack, but there are a few other tunes that will play to keep things fresh. Luckily, it’s great pinball music, with a lot of bounce to it and enough charm that it’s hard to get tired of it. Plus, it provides the perfect little jingle to end each ball’s bonus tally with. On rare occasions, the game will automatically work the flippers in time with the finger snaps here. It’s up to you to do it the rest of the time. I’m not going to tell you that you have to, but come on.

FarSight has done an excellent job recreating the table. It’s almost exactly like a perfectly-maintained stock Addams Family table, something that’s getting pretty hard to find as the years go by. They had to make some slight cosmetic alterations to the images of Fester and Puggsley, since FarSight couldn’t come to an agreement with the respective actors for likeness rights, but it’s barely noticeable. It also, fingers crossed, seems to be mostly bug-free, though I did get the camera stuck a couple of times after playing several games in a row. These are all pretty trivial issues to deal with in exchange for the benefit of finally being able to play this game at home.

The Addams Family is available as an IAP in both the free and paid ($0.99) versions of The Pinball Arcade. Its price tag of $4.99 is amazingly the same as the other individual tables from seasons three and four. Since the original machine cost 50 cents per play, if you play this eleven times, you’ve practically made money on the deal. For someone like me who always dreamed of owning the real table but will likely not be make that happen, this is a fine second prize at a fraction of the price. It’s a fantastic table that provides thrills for beginners and experts alike, digitized to near-perfection and set into a device small enough to fit in Thing’s box. A critical piece of pinball’s history that was at an ever-increasing risk of vanishing into the black hole that too many licensed classics fall into is now preserved for ages to come. Well done, FarSight Studios.