The first half of 2014 was pretty packed with roguelikes, with games like Wayward Souls ($7.99), Cardinal Quest 2 (Free), and Hoplite ($2.99) all taking their respective stab at the venerable sub-genre. This year has been a little more quiet on that front, with only a few offerings of any note at all. The best of this year’s bunch until now has been Lamp And Vamp ($1.99) which, while very fun, was riffing pretty closely on Hoplite. Well, mark it on your calendars, friends, because I think we’ve got our first fresh hit of 2015 in the genre with Auro ($1.99), the latest game from the developers behind 100 Rogues ($2.99). This one’s been cooking at Dinofarm Games for quite a long time now, but I think it’s certainly worth the wait.

It’s tempting to compare Auro to Hoplite, and I’m certainly going to be drawing lines between certain mechanics in this review, but in truth it’s a very different game. Yes, it’s a turn-based game that plays out on hex-based stages, but the overall goal is quite different. Instead of simply trying to make your way to each exit as safely as possible, you need to go on the offensive in Auro. Each round has you working towards a particular overall score, with points awarded for defeating the enemies that litter each stage. Stronger enemies cough up more points, but you’ll have to work hard to earn them. Racking up kill combos will yield even more points, encouraging you to engage the enemy rather than play a stick and move game. There are incentives for making your way to the exit of each stage, however. You’ll regain a little health, receive a new spell, and perhaps most importantly, get a fresh stage with a new batch of monsters to trash. 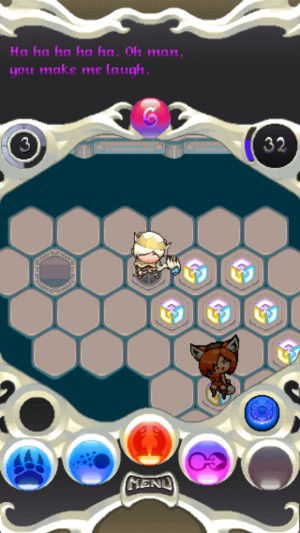 The trick to all of this is that in most cases your hero can’t directly kill enemies. Instead, his main means of attack is a shove. This would all be very ineffective were it not for the fact that the hex grid that makes up each stage is completely surrounded by water. Since most monsters can’t swim terribly well, all you have to do is give them a good push when their back is to the water. Of course, monsters can also hurt you in a similar fashion, and most of them can just directly attack you on top of that. The core of the game is in positioning yourself in a way that you can push the enemies overboard before they can hurt you. It’s easy enough with basic enemies like the rat, but there are 14 different enemy types in Auro, each with their own particular behavior. Once you learn how they’ll act, it’s easy enough to handle each of them on their own, but most of the time, you’ll have to deal with combinations of different monster types. Unless you’re down to the last enemy, it’s very difficult to focus on any one enemy for long.

Aside from your bumping abilities, you also have access to a range of magic spells. Grouped into three different elements, these nine spells offer a wide range of effects. While one of them is a direct damage attack, the rest require a bit more strategy in their use. You can use a wind-assisted burst of speed to close the gap between you and a distant enemy, a bit of ice to make the ground beneath the enemy’s feet so slippery than even a heavy opponent will lose their footing, or some fire magic to detonate a space, blowing back any enemies adjacent to it. You’ll start off each game with a couple of these spells in tow, and you’ll earn one more each time you exit a stage, up to a maximum of five. Each spell has a cool down associated with it, so you can’t just use them willy-nilly. You can also pick up magic in the form of single-use candies. You can only carry two of these at any one time, but they can be very useful for giving you access to spells you don’t have, or for an immediate extra shot of one you do. 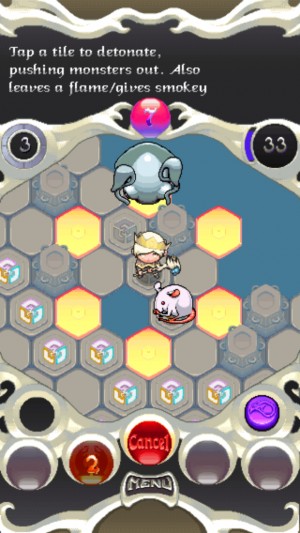 It takes a little time to get used to everything that is going on in Auro. There’s a very thorough and enjoyable tutorial that will show you the ins and outs of things like enemy weight, different statuses than can afflict the flooring, and so on. Once you’re ready to try the main game, you get something of a test run that will assess your ability based on your performance. It will assign you a difficulty level, and from there, it’s up to you to crawl upward. Each run will earn you some experience towards your overall level, which determines both the number of points you’ll need for victory and the overall difficulty of play. The first few games will be clumsy, but you’ll figure out a new trick each time. Before long, you’ll be herding around enemies like a shepherd with his flock, mixing and matching your spells to feed the surrounding squids en masse. At least, you will until you get bumped up to the next difficulty, and then you’ll have to learn some new strategies.

Auro has just the right mix going on with its gameplay elements. There are enough variables that new situations pop up constantly, but not so many that you can’t easily learn the rules of each of them within a game or two. Having an overall level that has a tangible effect on gameplay gives you an over-arching meta-goal, helping tie together the enjoyment of each individual play session. I also love the way the game puts you on the attack. It lends Auro a very distinct feeling from games it shares a surface similarity with. It feels very good to bait enemies into just the right place and launch a couple of spells that send the lot of them into the drink.

I’ve only got a few criticisms of the game overall, and only one of them has anything to do with the play mechanics. I feel like the early game could ramp up just a little bit faster. When I played the test stage, I was still learning the game, so I got stuck on the easiest difficulty. Within a few games, I had figured quite a bit out and was eager to move on to stronger challenges, but the difficulty progression lagged a bit behind the development of my skill. If you like to play in landscape mode, you’re out of luck, as Auro only works in portrait. I prefer portrait for this kind of game, but I know some people like it the other way, and it’s always best to have options. Finally, this game doesn’t respect the mute switch, which is a real pet peeve of mine. This is the perfect kind of game to fire up in bed after my wife has fallen asleep, but I hate having to dive for the volume buttons every single time.

Those little nitpicks aside, Auro is an excellent game. It uses familiar trappings but creates an entirely different experience on top of them. You’re rewarded for being clever, creative, and aggressive, and thanks to the scaling difficulty, there’s always a new challenge around the corner. As a cherry on top, the presentation is just as polished here as it was in 100 Rogues. The graphics are adorable, the writing is cheeky, and the music is varied and catchy. Auro is one of the rare games in this genre that should please both beginners and experts alike. It’s definitely worth checking out.